The new Mick Jagger - fronted supergroup featuring A.R. Rahman, Joss Stone, Damian Marley, and Eurythmics founder Dave Stewart, has come out with an update from atop their collective mountain of Grammies: They are indeed called SuperHeavy (last we’d heard that was just a rumor from an unnamed source), a name which billboard reveals is inspired by Muhammad Ali. The album they’ve finished is culled from a pile of at least 22 songs which burst out of them within a more six days of jamming together, and were recorded in studios all over the globe, including France, Cyprus, Florida, and India, although the majority of the tracks were captured earlier this year over the course of three weeks in L.A. 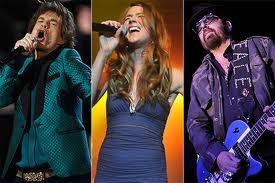 The resultant intergalactic mish-mash of an LP now has an intended release month of September, 2011 (no exact date yet), via Universal Republic in the US and A&M in the rest of the world. The first single will be a song called “Miracle Worker”, for which they’ll shoot a music video, and the album itself reportedly opens with Sir Mick singing in Urdu on a song by Rahman called “Satyameva Jayate” (“The Truth Alone Triumphs”). In the midst of the first round of hubbub last month, there were rumors of the existence of a video of some kind, although those were quashed by a representative from Jagger’s camp, who stated, “No video has been shot, no label in place. All a bit premature.” Turns out that person is a big dirty liar. Check out some studio scenes and backs of famous heads in the elusive album teaser after the jump.