"The blues is always with us because it deals with real emotions and feelings with human beings."

Midnight Shift is a four piece band that specializes in what they call Rhythm, Rockin' Boogie. Midnight Shift's third release, "Midnight Sun" and a slight name change to Mike Mettalia and Midnight Shift with band founder and leader Mike Mettalia stepping to the front.  The album includes very special guest rock and roll sax legend Jimmy Cavallo who’s 1951 single “Leave Married Women Alone” the band covered with Jimmy adding his sax and vocals to the tune. Six songs on the recording were also recorded at the legendary Sun Studio in Memphis in February 2012. 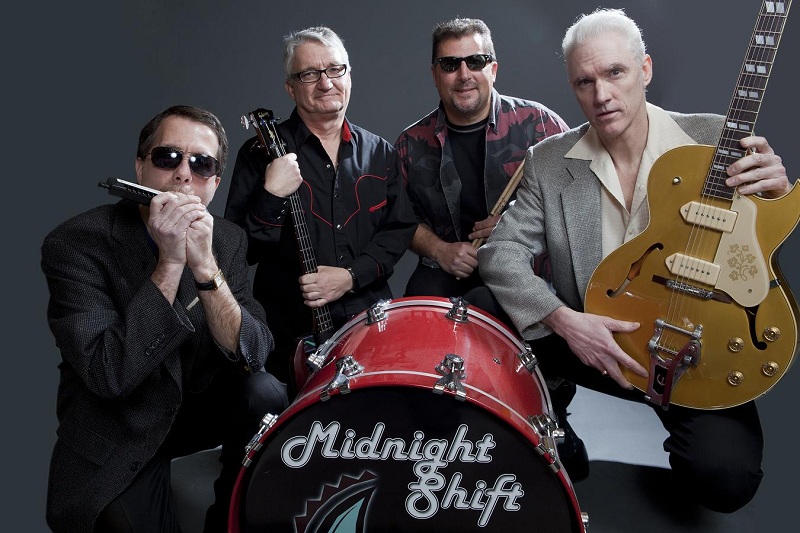 Mike Mettalia and Midnight Shift also competed for the second time in 2012 at The International Blues Challenge and was a semi finalist in 2006. They have opened up for Rod Piazza, Gary US Bonds, Rick Estrin, Guitar Shorty, Joe Louis Walker, Little Ed, Asleep at the Wheel, Robert Gordon, and Shemekia Copeland. They have also backed up harmonica master Steve Guyger several times. Besides group leader and founder Mike Mettalia, Midnight Shift includes guitarist Mike McMillan who has been with the group for over five years now.  Before joining, Mike had his own rockabilly band, “The Hi Rev Combo”, and has backed up Billy Lee Riley and Byther Smith.  On bass is Paul Pluta and drums is Tim Smith.

Mike Mettalia, on harmonica and vocals, played with Crosscut Saw for 13 years. He has opened up for Junior Wells, Robert Cray and The Nighthawks. Mike was also a part of Carey Bell’s band at the 2003 Lehigh Valley Blues Festival in Carey’s absence. Mike McMillan, on guitar and vocals, was a member of Crosscut Saw and The Tall Guys. It is Mike's versatility with rockabilly and blues that adds a cutting edge to Midnight Shift.

Mettalia: The blues means a lot to me as it is a way of life that is very honest.  I have learned that once you feel the blues they never leave you and they are always there for you.

McMillan: I’d say it connects me to a commonality of all people’s lives – the good, the bad – the basic primal emotions of love, longing, loss. 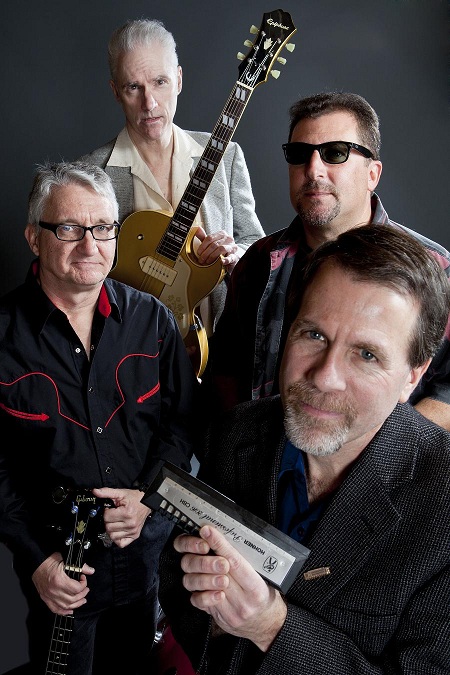 McMillan: I played my 1st gig in 1976 with a group called Avies. It was a kind of Byrds tribute group. At some crappy party for some Naval Seabees

Mettalia: I think observing what’s around you in everyday life and how you feel inside about what’s happening in your life make for good songwriting.

How do you describe your sound and progress, what characterize the music philosophy of Midnight Shift?

Mettalia: My philosophy is in keeping with the older sounds of the 50’s and keeping it fresh is how I like to describe the sound of Midnight Shift.

McMillan: I play a swing style of blues for the most part, with some Chicago influence as well

Tell me about the beginning of Midnight Shift. How did you choose the name and where did it start?

Mettalia: I started the band in 2004 and chose the name because It was a great Buddy Holly song.  It just seemed right as I like the straddle the fence between blues and 50’s rock kind of what those guys were doing when they came up.

What are some of the memorable stories from the road and recording time at Sun Studio with the band, you've had?

Mettalia: I have has some great times over the years with the band.  Some of like you said were recent with recording at Sun.  Another great time was right after we recorded Leave Married Women Alone at Sun Studio.  I looked up the author of that song, Jimmy Cavallo who wrote that back in 1951.  I found out he is living in Florida and was able to hook up with him when I was on the road with Christopher Dean. I had a day off on the road and asked him if he would like to record sax on his song and he said sure.  Getting him to sing on it too was like icing on the cake.  Other memorable times include getting to get harp legend Steve Guyger to record with us and to back him up.

McMillan: A fun road trip with playing in Memphis and all. Sun was cool - session was very late and long but we were glad to have done it. Mettalia: They’re have been several people.  There was Junior Wells when I first started, of course Steve Guyger and the harp guys I listened to starting out like Big Walter and Snooky Pryor.

McMillan: From listening to the music of BB King, T Bone walker, Nick Curran and Buddy Guy and Roy Buchanan.

Mettalia: The best moment that’s hard one.  Early on opening for Carey Bell at The Lowcountry Blues Bash was one.  Recording Rhythm Rockin’ Boogie and Midnight Sun with the current version of the band was definitely best moment.  Worst moment forgetting a line to your own song.

McMillan: It’s hard to say what was the best, but playing with Saint John’s Alliance was up there among the best as well as backing up Billy Lee Riley.  Worst moment as when I broke my index finger on my left hand in 1995.

Mettalia: Don’t stop.  If you love what you do keep doing it and the rest will come.  Persistence is a great thing to have.

McMillan: Good Luck – Besides being proficient on your instrument, it sure helps if you can write songs and sing. Express yourself in as ways as possible.

Why did you think that the Blues Harp continues to generate such a devoted following? 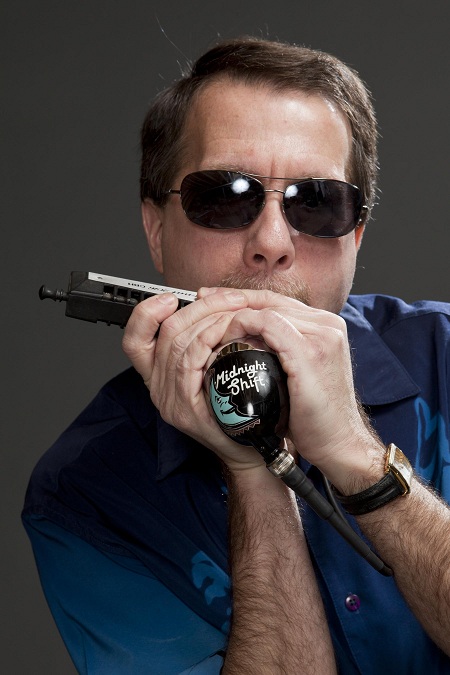 Mettalia: It’s like saxophone in that it is so expressive.  The attraction is that you can learn it by ear and go way beyond that to create your own voice

Do you know why the harmonica is connected to the Blues & what characterize the sound of blues?

Mettalia: I think the harmonica is connected to the blues because you can shape it anyway you like to express your feelings.

What are you miss nowadays from the old day of Blues and Rock n’ Roll?

McMillan: What is missing is economy of expression and purity of tone. Too many guitarists rely on pedals and gadgets to “color” their sound that modern blues sounds too much like rock music.  Same with good old rock n roll – nowadays too much technique (too many notes) and sound that’s too processed

McMillan: Jamming with Ray Condo’s band was pretty cool. Some of the more memorable gigs I’ve had were opening up for Wanda Jackson at Maxwell’s in NJ. The crowd rushed up to the stage to buy CDs. The Billy Lee Riley shows we did at the Rodeo Bar in NYC were fun. And of course playing at the Blue Comet with my old Rockabilly band the Whoadads was a Great show too

Are there any memories from Junior Wells and The Nighthawks, which you’d like to share with us?

Mettalia: I have a great memory from Junior in being backstage with him when I was with another band and we were opening for him.  We were doing our sound check when he came in the club and walked right up to the stage and stared at me. Wow I was scared!  He later showed me how to do the intro to Hoodoo Man on the harp backstage and bought the band a whole round of drinks while talking about playing with Muddy and Little Walter. Mark Wenner was great.  First time I met him I asked if I could sit in and he gave me the mic and said it’s all yours.

Would you mind telling me most vivid memory from Rick Estrin, Robert Gordon, and Steve Guyger? 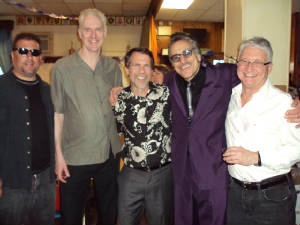 Mettalia: Best moment with Rick was opening for him and looking over to see he was watching us from the side of the stage.  My favorite moment with Steve was him giving me a solo on stage and I didn’t have the harp I was looking for so I wung it by playing in third position.

McMillan: Estrin and his cool suits...

Gordon and his great baritone voice still sounds good. Playing with Guyger is like an exercise in minimalism.  A very soulful cat.

Tell me a few things about your meet with Carey Bell and Byther Smith, which memory makes you smile?

Mettalia: Best moment with Carey was asking him if I could sit in with him.  He never told the band I was coming up so when he called me up the band is telling me not to come up because they didn’t know who I was and Carey insisted on me coming up to play harp with him.

McMillan: Byther was in his mid 60’s when I played with him. But he was a boxer in his younger days and was still solid and strong.  He carried his Fender Twin Reverb amp like it was just a small suitcase

Mettalia: Junior Wells told me years ago when you’re playing take charge and make the band do what you want to do.

McMillan: Tell the story. Set a mood and let your heart and soul do the talking.

What the difference and similarity between the BLUES and ROCK N’ ROLL feeling?

McMillan: They say Rock n Roll was a baby of the Blues – and it’s where Rock came from Elvis and Chuck Berry and the Stones to Zeppelin and Hendrix. They all got there through the blues. The blues scale is widely used in Rock music too.

Mettalia: The blues is always with us because it deals with real emotions and feelings with human beings.  You can change that plus it is always evolving to sound fresh...

McMillan: Like I said, the Blues is timeless. It’s the common denominator. It’s universal…One wish I have for the Blues is that I hope more musicians can keep the older more traditional sound alive without all the rocked up overly chops oriented sound taking over all the time.