"To me the deepest blues is the origins of "WORLD MUSIC", and that’s my inspiration! To make deep music that people all over the world can dance and relate to!!"

Lightnin Malcolm has come to exemplify the modern day Deep Blues Guitar groove. Its a sound which traces back to the origins of blues, when a single guitarist rocked the house all night long. Born in Missouri in mid 70s, Malcolm started playing his music and traveling on the road in his late teens. He lived his music, playing night and day where ever the road took him, surviving off his versatility.

His travels took him all over but it was North Mississippi that he identified with most and took him in. He immediately befriended and began performing with many of the Legends living there such as Big Jack Johnson, Cedell Davis, R.L. Burnside, Hubert Sumlin, Honeyboy Edwards, T Model Ford, Sam Carr, Jessie Mae Hemphill, Otha Turner, Robert Belfour and many others. Over thousands of nights playing the rough and tumble juke joints, soaking up the rhythms and culture, Malcolm learned to be an alert and durable performer. Drums are an important part of Malcolm’s music and over the years worked with the best in Mississippi including Kenny Kimbrough, Cedric Burnside, Calvin Jackson, Cameron Kimbrough and many others. Whoever is anchoring the drums, the music takes on a churning force of tribal rhythms, where both instruments push each other to new heights. In 2009 Malcolm won Blues Music Award for Best New Artist and toured the world with Burnside on drums. In 2011 he released the critically acclaimed album RENEGADE, a true showcase for Malcolm’s developing songwriting and vocals, infusing soul, reggae, hip hop and rock into his hill country sound. 2011 also saw Malcolm serving as “musical director” on Hubert Sumlin and Honeyboy Edwards final tour of their lives, which also included rock band Big Head Todd and the Monsters.

Mississippi based guitarslinger Lightnin Malcolm was back with his album "Rough Out There" on Mississippi Indie label ShakeDown Records. Special guests include Grammy winning slide master Luther Dickinson and introduces T-Model Ford's grandson STUD on drums.

Well to me the blues is a way of life; the music is just an extension of how your life goes. I was fortunate to be friends and learn from some of the greatest masters of the blues, guys who came up very rough here in America, and they taught me that the blues is "survival music"!! It’s direct and cuts straight to the heart, and brings the real truth to light. To be a good operator, you first must have experience, not just sittin around playin but travelin, meeting people and seeing the ways of the world. U gota have a big heart and be in touch with what’s goin on, not just on the surface but deep reality. 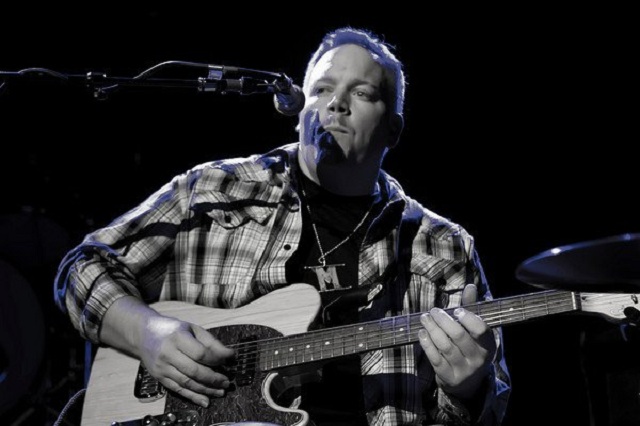 "What I miss most of all is all the old cats that I learned from. There will never be anymore like them. And I miss a lot of the old fashioned juke joint that used to be on the old backroads." (Photo by © Arnie Goodman)

How do you describe Lightnin Malcolm sound and progress, what characterize your music philosophy?

Well I like to let others do that, but I will try. My sound is based on the deepest blues, starting at the very root and kind of spirals out from there. It’s basically the guitar sets up all the music with basslines, rhythm chords, and lead notes on the treble strings. In the old days a single guitarist rocked the house, and I try to be an extension of that. As a drummer myself, drums are a very important part of my sound, and I have to have the best! Currently I’m using blues legend T MODEL FORD's grandson STUD on drums. And we are dynamite together! I’m way less concerned with guitar solos, the whole purpose of our sound is for the guitar and drums to be razor sharp in the groove, and to push each other together, rather than just 1 person soloing. My philosophy towards music is that every song is dance music, and should have a good dance beat. Obviously we tap into a variety of sounds, some modern, to get an up to date sound on universal themes and grooves. 2014 blues from the fields!!

I guess the most important time is now. After years of learning and gaining a unique experience, now is the time to cultivate all of that in a professional sense, and get all these songs and stories from the road out there to the people. I’m almost always on tour now, which I’m grateful, but back when I had free time I used to hang out with really funny characters at really raw juke joints and house parties, where I’d play all nite and people would be dancing and just having a great time, with no money!! A lot of doors are opening up for me and I’m real proud and happy. I just want to give the people some really powerful music that hits them right in the heart, and speaks the truth about the world we live in. 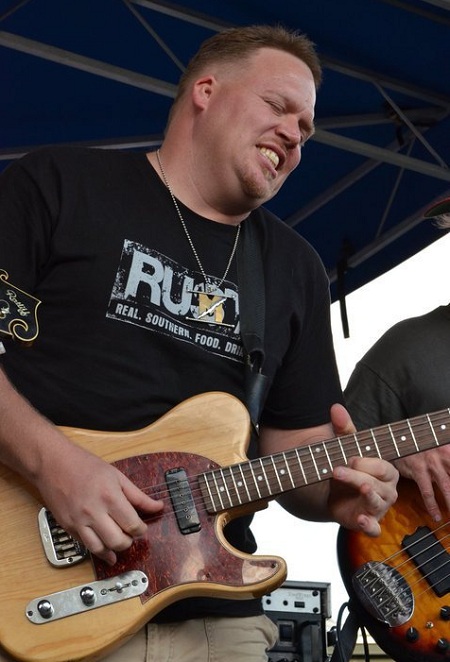 The blues is the roots of ALL music. It speaks the universal truth! It’s the boss of all music, even though it will never be on top of the mainstream. Its following may be smaller but they are very devoted because they FEEL IT!! Its spiritual music that poor people use to uplift themselves and not go crazy!!

"Well to me the blues is a way of life; the music is just an extension of how your life goes."

One favorite moment was playing at Buddy Guys in Chicago, and Buddy is one of my alltime heroes. He’s sittin at the bar watchin me play with a real serious look on his face, not his usual smile. And I’m thinkin to myself, man he don’t like what I’m doin with this guitar... So a little later I tell the people we gona take a break and be right back. As I’m pulling my guitar off, behind me Buddy jumps on stage and says to the crowd "THIS IS THE BEST FUCKING TWO PIECE BAND IVE EVER HEARD. I WANT TO SING ONE WITH YOU. MAKE IT FUNKY!!! Ooh man I felt a lot better then!!

Meeting R.L. Burnside was important! He’s such a big influence on me, not just in music but in life. He was so deep and funny, he knew how to make people feel good. Best advice I ever got was from all the older cats. They would tell me..."boy, u gona be one of the best ever if u keep workin at it! You got the gift, but it don’t mean a thing if you don’t develop it." Cedell Davis told me " the way u sleeping with that guitar in yo hands, you gona wake up one day and be a genius on that guitar!"

Are there any memories from T Model Ford, Sam Carr, and Otha Turner which you’d like to share with us?

T MODEL FORD and me traveled all over the world. I’d open the shows playin solo, with kick and snare drums on my feet, guitar and singing. Then I’d play drums behind T MODEL. Just two piece, but we would really rock the house! He was so funny, no matter what hardships we might face, we stayed laughing through it all. He taught me how to really be strong and don’t let nothin get you down. JACK DANIELS TIME! 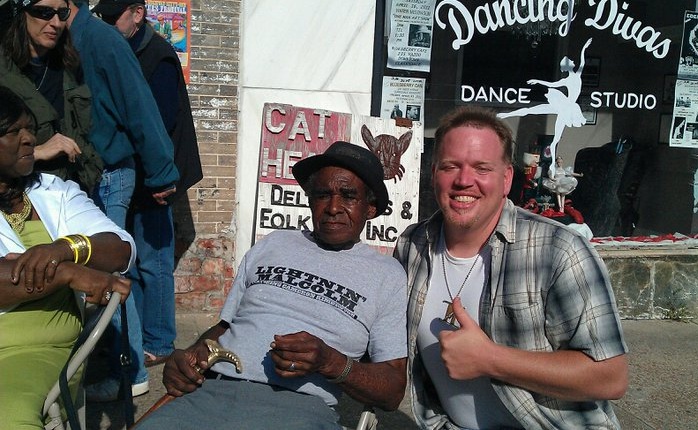 "For me, songwriting is easier than ever older I get because I have more experience, plus I have kind of found my style of writing, which is to tale ancient grooves and update them in todays world. I try to make every line count, and tell the truth!" (Photo: Malcolm and T-Model Ford)

What I miss most of all is all the old cats that I learned from. There will never be anymore like them. And I miss a lot of the old fashioned juke joint that used to be on the old backroads. They don’t have fun like that no more!!

Which memory from R.L. Burnside, Hubert Sumlin and Honeyboy Edwards makes you smile?

I was the musical director on the last tour of both Hubert Sumlin and Honey Boy Edwards life’s. We was paired up with rock band Big Head Todd and the Monsters for a big ROBERT JOHNSON CENTENNIAL TOUR. What a great bunch of guys! I was like the musical translator between the deep blues guys and the rock musicians. Very fun and I was very proud to do it! Biggest compliment I ever got was from Hubert after the first nite, I came off stage after playing a couple of solo songs on a national steel guitar. And Hubert just looked at me over the top of his glasses and pointed at me and said "BOY...I DONT KNOW WHAT THE HELL HAPPENED TO YOU... BUT I THINK I KNOW WHAT IT WAS!!!"

What are the lines that connect the legacy of Blues with Rock and continue to Reggae and Folk music? Like I said, the deep blues is the root of all music. And when you got deep roots, your branches can grow very far. By me staying so close to the roots, I find it very easy and truthful to be able to expand the sound.

Bob Marley is one of my favorite musicians of all time. Same with Hank Williams. The percussive attack on the guitar mandatory to play Mississippi Hill country blues is the same as reggae music! To me the deepest blues is the origins of "WORLD MUSIC", and that’s my inspiration! To make deep music that people all over the world can dance and relate to!!

If I could go back in a time machine I would definitely go back to watch Charlie Patton playing on the old plantations. Also definitely to see Howlin Wolf with his Memphis band with Willie Johnson on guitar before Wolf moved to Chicago. That’s just about my favorite sound of electricity!

For me, songwriting is easier than ever older I get because I have more experience, plus I have kind of found my style of writing, which is to tale ancient grooves and update them in todays world. I try to make every line count, and tell the truth! 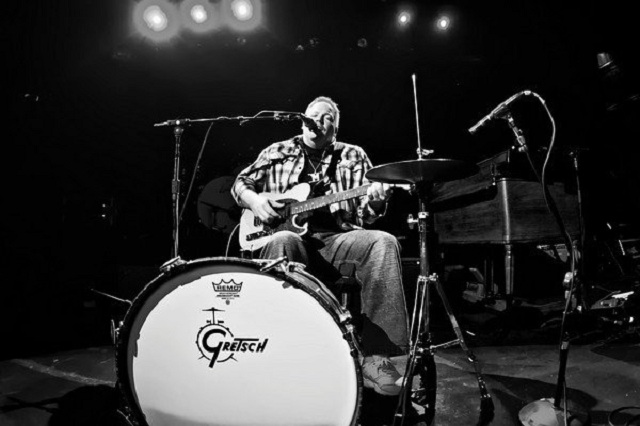