"I find it hilarious that People say they are going to be great and achieve the American dream but do nothing to catch it."

Grant Goodwine is an independent multimedia artist currently based out of Southeastern Illinois. He's Worked with several internationally known bands and musicians and works both at home and on the road chasing the American dream. Grant says: "As an artist, recently I’ve found myself winding up in discussions and asked for advice from other creative people. Usually involving their frustrations in their works. About how much of a perfectionist they are and how frustrated they get when it doesn’t turn out the exact way they wanted it to. Frustrated to the point of either scrapping the project or giving up entirely. I feel like what I’ve told them is worth saying publicly.         Photo by Curt Goodwine 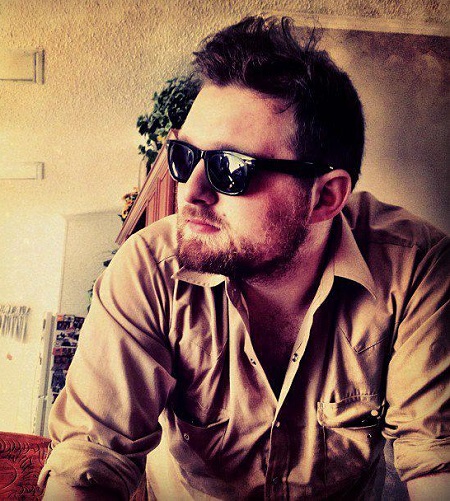 Perfection is absolutely unachievable. In both art and life. You just keep going. You just keep letting yourself improve. You keep going and reaching forward to those goals…but the closer you get to your original idea of what perfection is. your perspective changes and perfection is something else and you continue chasing it.  However there are some people who don’t even chase it. Multiple creative people I speak to will sit around and think about the concept over and over in their head, then when they finally get the courage to get up and execute it in their preferred medium, it doesn’t turn out the way they wanted it to. Then they give up on the whole concept. Heres a secret. You’re not in control.  In art. love. and life in general, its all a dance with a vicious epileptic 8 legged shark.  You just aren’t going to get that bastard to do what you want it to. So how do you dance with such a creature? Its simple. You just dance with it. You get slapped. stepped on. knocked over. bitten and so on.  Yes you will get frustrated. But KEEP DANCING. Eventually you will learn how to counter-act with its various Jerks, snaps, steps and shakes. Keep your eyes on the damn thing cause once you look away, it will knock you on your ass in the blink of an eye. As with anything. You aren’t going to walk out the door and become the master of something just like that. You aren’t going to put your pencil on paper and you’re instantly Leonardo DaVinci. You gotta get up and dance with the 8-legged shark and get knocked down a couple times. And the only way to get better is to dance with the damn thing. Ok, so Your drawing, writing, photograph isn’t perfect.  Sometimes its downright ugly. But you still went out and danced."

Anything that gets under my skin I generally draw or paint it out. From heartbreak to politics. As of lately however, it’s been more of my frustrations towards a society that likes to water people down and make them too bland and predictable. Of course I have fun with it though.

How would you characterize the philosophy of Grant’s artwork?

There would be a lot of words that can and have described a lot of my works. Cynical, Smartassy, Wild, violent, twisted.  However For everything I have ever made, I think only one word works for me. "LOUD." I want my pieces to be hard to ignore be it through the message and/or the execution no matter if I’m painting something Romantic or cynical. I want it to be intense and loud. 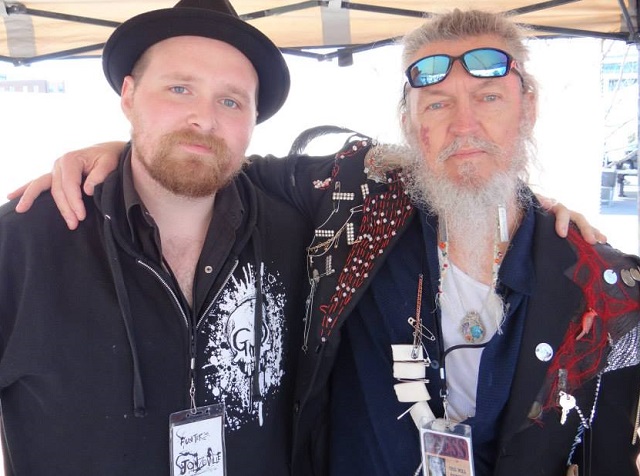 "Beat and Counter culture have definitely gave me the freedom to find my own voice and identity." (Photo: Grant Goodwine & outlaw poet Ron Whitehead / Photographs © by Jinn Bug)

There has always been a relationship with my art and music. Now a days, when I'm painting and Im wanting to capture a certain mood or feeling, I find a song with that certain mood that will help me  capture it on paper. Whenever I am waiting on ink to dry, I often plug in my guitar and wail around on it for a little while as well. As for Literature, it doesn't seem to effect my artwork as much as motivate me to get up and work. A proper Non-fiction can do that to me. However it doesn't usually come into play when I am actually painting. One would say it runs parallel with art and music which are madly dancing with each other. I also write occasionally where my love of certain literatures comes more into play.

I have been Lucky enough to meet most of my living Visual art influences including the iconic Ralph Steadman. However I feel like the most impact a meeting has ever made on my career was with a Punk band from Detroit called the Koffin Kats. I met them back in 2010 and they have been wonderful and supporting friends ever since. I've designed them merchandise, been to countless shows, met many clients and made many connections through them and all through it, I was learning how to properly act as a creative professional. When we met I was more quiet and at a fork in the road with my career. They helped me come out of my shell and influence me to go down the "do it yourself" path instead of going to work in an animation studio or a design firm where I would be a lot less happy following orders. 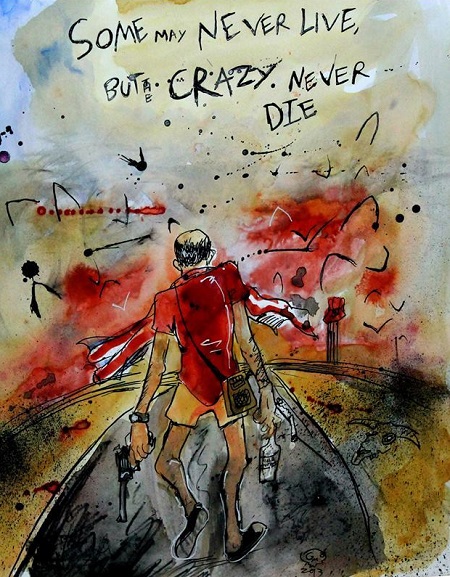 I think he would tell us "Don't show fear and don't stand for bullshit" Which is one of the many lessons he left us with.  I feel like that example on its own is his Legacy. If Hunter ever had fear, he never shown it. He stood his ground and spoke out against some real twisted bastards. During this, he also had creative fun doing it. Hunter also set a great example to Live Romantically. Play mischievously. Work passionately. Go off the beaten path to the beat of your own drum. Walk tall and Kick ass.

I can probably write an essay on how many fears I have for the future of art, but I'll keep this short for the readers sake. Pop culture is a huge worry of mine for the art world. For every original painting I see, I see thousands of fan arts. This art is saying nothing to me other than they like that particular show, video game, celebrity, etc. I want art to represent and say something powerful, however the majority will keep buying fanart so people will be more inclined to paint what sells instead of exploring their own mind and creativity.  I know people are going to argue this with me, but I just never understood the hype with Fanart. You have your own voice. Find it and use it.  It is good to see that the numbers of people speaking out with their art are rising again. That gives me some hope. It would be great to see painting and illustrating be as valued as they were back in Impressionist and Post-Impressionist times.

I find it hilarious that People say they are going to be great and achieve the American dream but do nothing to catch it. They sit on their asses in front of a Screen telling them what to think and buy then expect success to fall on their lap. The reality is the odds are already against you in this pursuit.  You are going to have to work your ass off and make numerous sacrifices to rise above and even smell it. It’s been great however seeing some hard working friends and family having it all pay off for them. It’s definitely worth turning off the PlayStation.

What do you learn about yourself from the Beat movement and what does Counterculture mean to you? 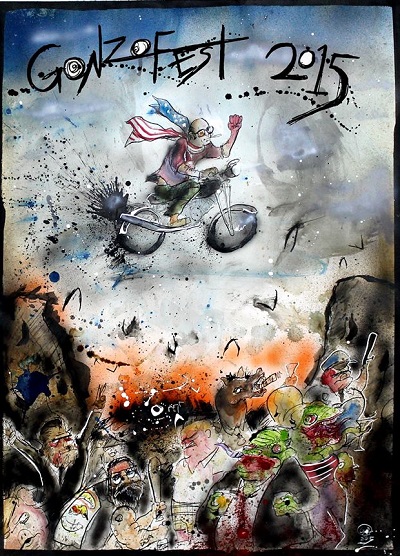 To me, Counterculture is where the advancement of ideas, culture and to some extent humanity is nurtured. As Hunter S. Thompson said, "Yesterday's weirdness is tomorrow’s reason why".  I feel like counterculture gives you freedom to think through different perspectives and find peace within yourself if you don't fall into some of the gimmicks certain pockets of counterculture has.  I mean if you think about it, many steps forward in society, science, philosophy and arts have once been original thoughts from outsiders who questioned authority and refused to stay in line. Beat and Counter culture have definitely gave me the freedom to find my own voice and identity.

I think I would like to go back to San Francisco or New York City in the 1960s to see the massive American culture shift with my own eyes and compare it to modern times. I definitely feel there are a lot of similarities. The troublemaker in me kind of wants to leave behind a super heavy punk album just to see how it would effect the situation.

Somehow Have Moses put an 11th commandment into effect.  That commandment would be "Don't be an asshole." I think that would help out Humanity significantly. Can you just imagine a world where nobody tried to screw anybody over? Then again, things wouldn't be as interesting…but probably for the better none the less.

For Poe, I would just tell him how much his work is loved from so many people. For a man that’s been through emotional hell and back, that could mean the world to him. And as for Tom Waits, I’d like to ask 3 things. I’d like to ask him about his creative Process. I'd ask him if he would want to somehow creatively collaborate. And most ridiculously, I’ll ask him to read me a campfire story haha. 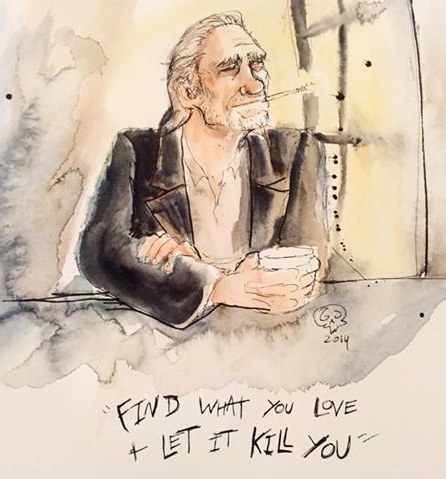 How you would spend a day with Bukowski?

I would want to sit around, drink scotch and talk about life with Bukowski. There might be a couple disagreements on little petty things but it would be a hell of a chat. I feel like we could get each other laughing pretty good.

The best advice? "Just keep it going. No matter what. Keep moving forward and it will pay off."