"The connections for Blues, Gospel, Jazz, Rock, Reggae and African music are spirit, soul, with love of life, with all its inequalities."

Ralph Kinsey is a percussionist, drummer of The Kinsey Report and visual artist. Under the direction of his mentor and legendary father, Ralph Kinsey was introduced to gospel and blues by the Mississippi -born bluesman Lester “Big Daddy” Kinsey. Big Daddy Kinsey was known for his Delta slide guitar and revolutionary harmonica playing. Receiving his first snare drum before he was six years old, Ralph has many countless years of musical history under his belt. It’s been nearly 15 years since Gary, Indiana’s Kinsey Report first burst upon the national blues scene with their blistering brand of streetsmart, funky blues-rock. The Kinsey Report established in 1984 by the brothers Donald, Ralph, and Kenneth Kinsey, plus a family friend, Ron Prince. Lester Davenport played harmonica with the group. The older brothers, Donald and Ralph, formed a blues/rock trio called White Lightnin', before the younger children also ended up in the group. Albert King, Bob Marley, Middle Walter and Big Daddy Kinsey have all toured with the group. The Kinsey Report has returned to the studio after a 14 year hiatus to record "Standing (I’ll Be)" (2013), a four song EP of contemporary and traditional blues, gospel and funk. Ralph exhibiting his artwork "Sound Impressions series" in Pleasant Grove Studio at Hobart, IN.

What do you learn about yourself from the art and music?

From them I’ve learned that I’m endowed with the gift of making rhythms from sounds and I have high appreciation for colors. When I began to cognize the colors so abundant in nature. There are many things I’ve learned and am still learning from art and music. They led me to recognize in myself discipline, focus, endurance, and responsibility, for I believe as an artist I have a duty to share, teach, inspire and pass on the virtues that art and music contain, just as my father and mother and a host of others did for me. For I believe that these two mediums guided me to listen more keenly and to look deeper in myself and the world before me. I simply try to express what I see, hear and feel from the past, present, and future in a primal, organic state of mind. For me relating to others through my art and music is the way I communicate best.

What experiences in your life make you a good artist?

The experiences that have made me an artist are many. I will try to narrow them down, I think as a youth being allowed to express myself musically with the encouragement of family and friends and having the privilege at a young age to observe and hear the veteran players. 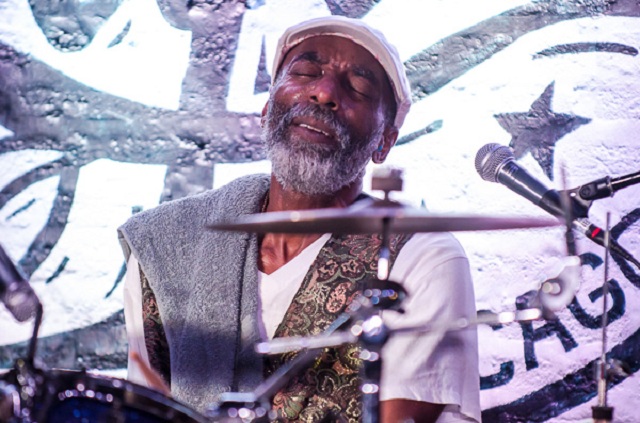 "My hopes are for peace, love, health, charity and prosperity and for us to be better stewards of our planet for out children's sake." (Ralph at Buddy Guy's Legends, Photo by Howard Owens)

How do you describe and what characterizes Ralph Kinsey’s music and artistic philosophy?

Its a byproduct of the roots and heritage of my life. It’s through my art I find that I am able to reach a broader audience and a more accepting mindset when it comes to topics of social divide and the inner struggles we all face in this chaotic world.

I consider the present time the most interesting time. Always changing and evolving, you just never know whats around the corner. Good or bad, it keeps you on your toes, always seeking out opportunity to further my career. What tomorrow brings is far more interesting to me than what happened yesterday.

I had the best moment of my career so far performing at The Montreux Jazz Festival with my father and brothers. That was an honor and privilege coming from the streets of Gary, Indiana to the streets of Montreux where so many musical giants have performed.

The worst without a doubt I would say was a gig in New York City in the 70’s in Central Park. I was playing the drums for “White Lightning” at the time and we opened for “Uriah Heep”. The crowd was rowdy and full of energy. We thought it was gonna be a great show for us but we were in for a real surprise. Put it this way, the crowd made it very clear that they weren’t there to hear us. It was a matter of minutes before the tomatoes started flying. It was a shock to say the least; we were a tight band and never received that sort of response to our music. It was just one of those nights I guess. Man, we got pelted by everything under the sun. We stuck it out though, ducking and dodging everything that came our way. I was lucky because I had my drum set to shield me from flying objects. We all knew our jobs and remained focused on finishing our set. I look back now and I can’t help but laugh about it. It seemed like it was straight out of a movie. 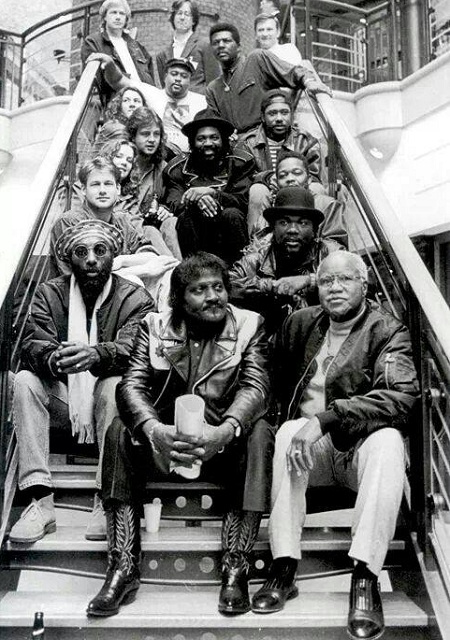 Off the top of my head I would say “Robert Lockwood Jr.” and Lester “Big Daddy Kinsey”. Man, that old man could pick. If my memory serves me correct, it was in Cleveland at a club called Wilbert’s in the late 90’s. Billy Branch set in that night as well. We connected on a level that I can only describe as electric.

As an opening act for the Allman Brothers, and Albert Collins. Opening for B.B. King and Living Colour. Opening for Seals and Crofts. Playing at The Warsaw Jazz Festival in the 90’s. And opening for Luther Allison at the Poconos Blues Festival.

“Keep a level head and take nothing for granted!”

Existence, Being, Family, and Creativity. Its a way of Life.

Are there any memories from Big Daddy Kinsey and Kinsey Report which you’d like to share with us?

There are so many memories that stand out. As a whole, my father and brothers are associated with about every experience I have had at home and on the road. I feel blessed to have had a father who showed us the ropes and guided us through the business. He was always on it, he was very aware of the things around him that nobody else was. He would let us know if something wasn’t right.

Simplicity and the sense of loyalty in our community. We looked out for our neighbors back then and helped them in time of need.  We were all poor but I didn’t know it growing up. We had the music to uplift us and rise above the struggles that surrounded our neighborhoods. On a lighter side of it all, I really miss “White Castle’s” 12 cent hamburgers after our late night gigs. At the time, it was the only place in town open late. 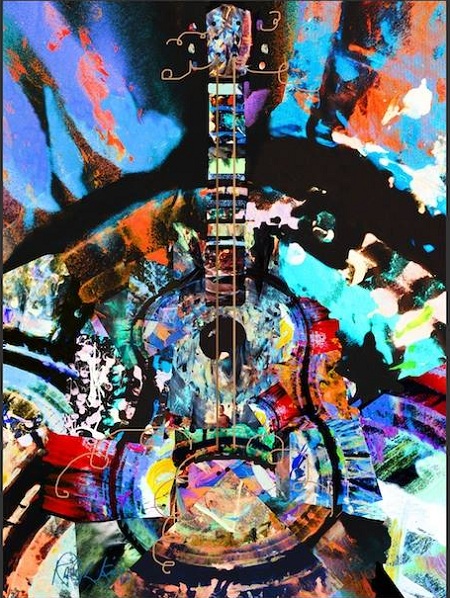 My hopes are for peace, love, health, charity and prosperity and for us to be better stewards of our planet for out children's sake.

“We belong to the earth, earth doesn't not belong to us” Sitting Bull

“An ounce of hope is worth of ton of despair”

"Music and Art have always been and will always be part of the struggle for liberation."

My “Sound Impressions Series” connecting sound, vision and rhythm has been brewing in my mind for quite sometime, I always wanted to create art that could capture the music. The older I get, the more urgent it becomes to produce projects I have been storing away. I am currently working on a new collection of paintings titled “Generations” that should be released in the spring 2014. It is focused entirely on the Blues and my family history in the Delta, all the way north into Gary, IN. Telling the Blues through visual art has ignited a spark in me. I encourage and hope that more Blues musicians paint the blues they play.

What are the lines that connect the legacy of Blues with Rock and continue to Reggae and African music?

The connections for Blues, Gospel, Jazz, Rock, Reggae and African music are spirit, soul, with love of life, with all its inequalities.

What is the relation between music, art and activism?

Music and Art have always been and will always be part of the struggle for liberation. From the exodus in Egypt, to the streets of Birmingham Alabama, as one of the new songs on “The Kinsey Report’s” new E.P. titled “ Standing I’ll be” the song “Standing” talks about overcoming life’s adversity and life’s struggles.

I would like to go back and experience Jerusalem before 70 A.D. and observe. 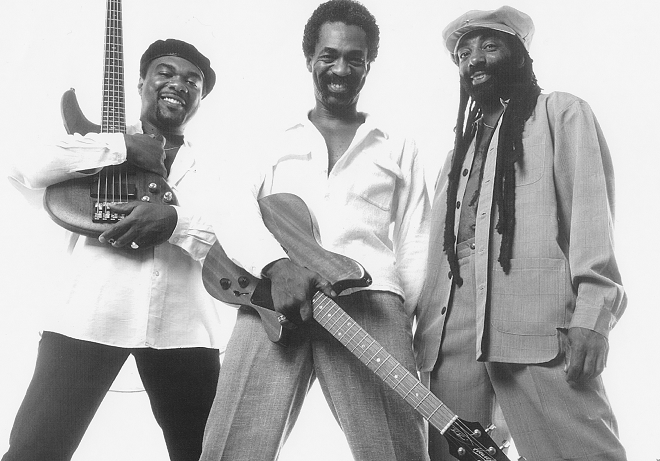