"Blues n' Jazz continues because it soothes the soul, from the gut to the unconscious."

Danny Draher is a guitarist, singer, musical director, consultant and producer. Born in Indianapolis, he heard the fascinating sounds of Wes Montgomery, James Brown, Ray Charles, and Elvis. He started playing piano and bass at a young age, then switched to the guitar and soon moved to Chicago. By age fourteen, Danny was performing at parties with local bands and began his professional life as a guitarist with Otis Rush and Buddy Guy at the Checkerboard Lounge. He recorded his first album with the Bob Reidy Band on Flying Fish Records at the legendary Chess Studios. He left Chicago and toured nationally with many popular, top 40′, rock, rhythm and blues bands. He moved to New York City and soon became the guitarist, singer and bandleader of choice. Through his reputation, he and his band have been hired by the who’s who of the music industry. He has recorded and toured nationally and internationally with artists such as Dr. John, Etta James, Paul Butterfield and Allen Toussaint.          Photo by © Arnie Goodman Photography 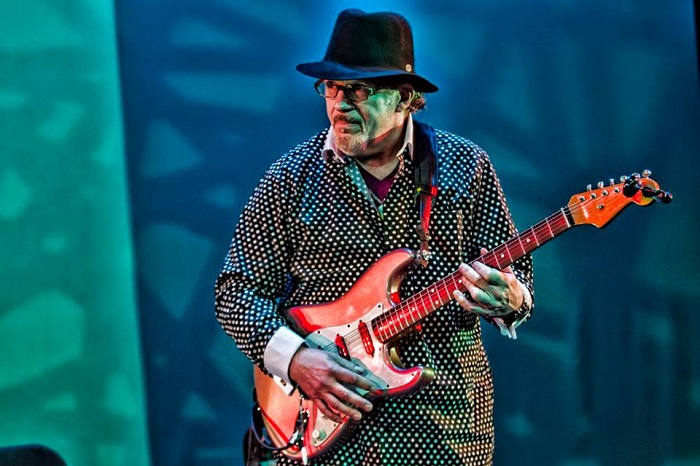 He was the musical director for the 1992 Rhythm and Blues Foundation Awards with some of the award recipients being Aretha Franklin, Bobby Bland, Sam Moore, The Staples Singers, Rufus and Carla Thomas. The Danny Draher Band performed for the Radio America documentary, The Blues Story, An American Art Form, featuring B.B. King, Ruth Brown and Buddy Guy at the Whitney Museum. He and his band were also in the 1994 first annual VH-1 Awards with BonnieRaitt. He performed with Buster Poindexter, Bo Diddley and the Uptown Horns at the Palladium for the Democratic Convention party in New York City with President Clinton on sax. Danny played many jazz and blues festivals including “The Montreaux JazzFestival” and “The North Sea Jazz Festival”. He was the producer for Cephas & Wiggin’s CD, Blues Men, on Chesky Records. He also worked with producer John Snyder as a session guitarist for Polygram and Verve Records and has appeared in several recent releases, including Lucky Peterson’s last two gold CD’s. This journeyman of multi-faceted talent and passion has mesmerized audiences internationally including Carnegie Hall, Lincoln Center and Madison Square Garden. Danny also appeared on Delmark Records Fifty Year Anniversary Jazz and Blues Collection CD. He has a great reputation within the industry and he is known for his style and finesse. He’s due for a Grammy of his own.

I found that when I 1st heard the music that it touched my spirit with a healing feeling. It found me, I didn’t find it.

How do you describe Danny Draher sound and songbook? What characterize your music philosophy?

My music is reflection of my personal life, and I play to live and live to play. 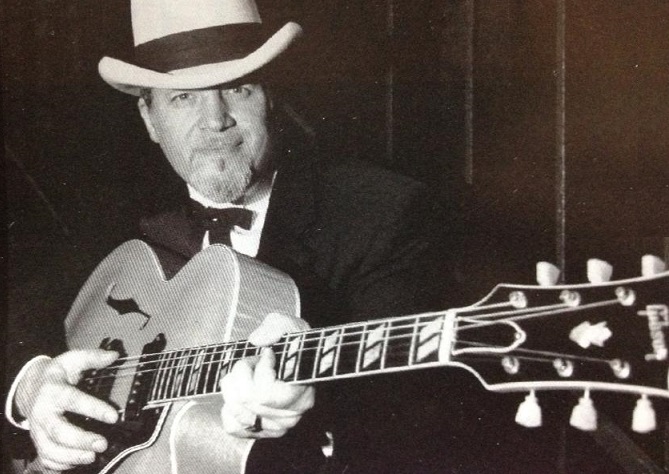 "Old days I miss is all the older players and their generosity to others who had an interest in playing. They all played at a much lower volume, and their groove was memorizing."

Why did you think that the Blues and Jazz music continues to generate such a devoted following?

Blues n' Jazz continues because it soothes the soul, from the gut to the unconscious.

All meetings and interaction with Artist were important, big or small, it is an education.

The best advice I got, wasn’t advice, it was approval that I was doing ok, by someone that I respected.

Are there any memories from Etta James, Paul Butterfield and Allen Toussaint which you’d like to share with us?

I played Carnegie Hall with Etta (James) using my own band and played an original song of mine before she came out, she gave me extra money that night because she knew I had a newborn son.

Paul Butterfield was a hero of mine, and he was good guy and cared that everyone in the band was ok and comfortable. He was a standup guy, as they say in New York.

Allen Toussaint was great to play with, he writes great songs, and I was his Musical Director a hand full of times when Dr. John wasn't there, we1st backed Allen in New York City with the Dr. John Band, Allen was a special guest, plus he is the history of New Orleans. 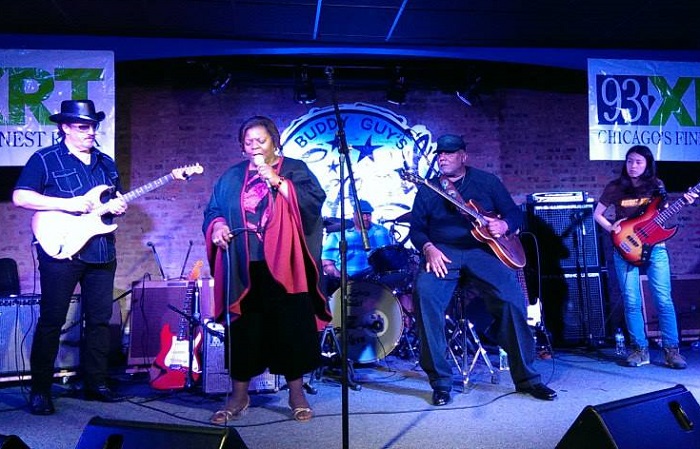 "My music is reflection of my personal life, and I play to live and live to play." (Photo © by Shoji Naito -  Danny Draher on stage with Katherine Davis on vocals, Tim Austin on drums, Carlos Johnson on guitar and Yoshimi Hirata on bass at Buddy Guy's Legends, Chicago, IL)

What has made you laugh and what touched (emotionally) you from the the Checkerboard Lounge?

Playing at the Checkerboard I remembering being accepted by most of the regulars there, and I was puzzled about some black and white issues, it was a good learning experience and being shown kindness. To me some people treated me better than my own family, which was an interesting observation and one I didn't expect, being from different backgrounds.

Bobby Bland said to me the 1st time I played with him, he told the band to bring it down! An "Take You're Son"! Which he would tell all the great guitarist I heard playing with him over the years!

Rufus was a great soul, a comedian and entertainer, and his lovely singer daughter Carla Thomas would always introduce him as the world’s oldest teenager, and he would come out in shorts, cape, knee high boots and everything matched with the same color. He was very funny.

Ruth (Brown) I played with once, she was the torch bearer the Blues, and was involved organizations for the blues, helped start in some way 'the Rhythm and Blues Foundation Awards"

When I was Musical Director for the Rhythm n Blues Awards" in 1992, the 1st year they used a band, I was hired by Lawyer/Singer Judy Tint, Aretha got the Lifetime Achievement Award, and I never got a chance play with her "YET". 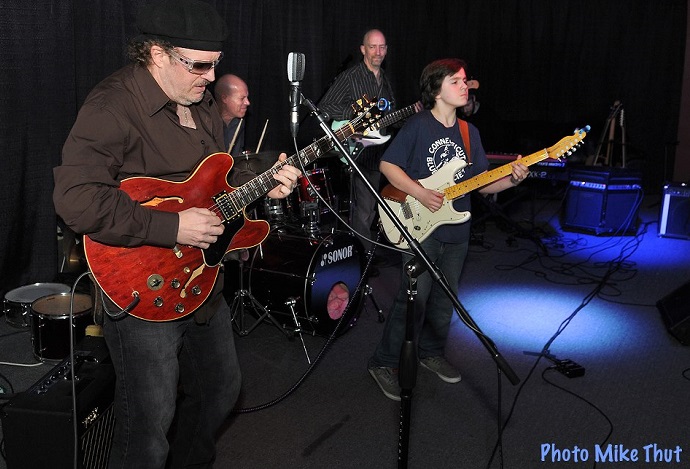 "The best advice I got, wasn’t advice, it was approval that I was doing ok, by someone that I respected." (Danny Draher on stage with Bobby Paltaufand / Photo © by Mike Thut)

I'd change the corruption of music business, I feel if you write and perform, artists should be paid their fair share. You know the history of the business.

Old days I miss is all the older players and their generosity to others who had an interest in playing. They all played at a much lower volume, and their groove was memorizing.

Let’s go back in time 10,000 years BC, and see what the hell was going in culture then, and at a safe distance! 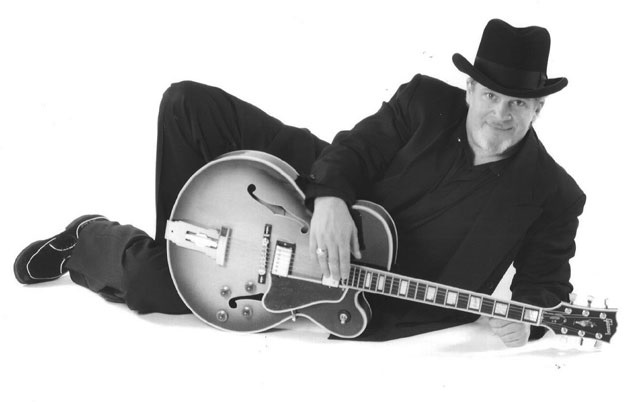