"The lyrics and the sounds of the blues are very close to the root of music – pure spirit. This is an eternal truth, and will always have power as a result. Spirit is everywhere and inside of everything!"

Yazan is a singer, guitarist, and songwriter from New York, playing a blend of rural country blues, folk, and psychedelia. At his debut album “Your Cooked Part” Yazan sought raw & truthful recordings; inspired by the field recordings of George Mitchell. He wanted a well-lit look at is insides. He traveled to record at the mystical Pound Pad, located 20 minutes from Athens, GA in Jefferson, where a rundown, one-room building with a sagging porch awaited Yazan. The acres of calmness balanced his wide open vocal capacity and the porch reiterated his boot stomp heartbeat. 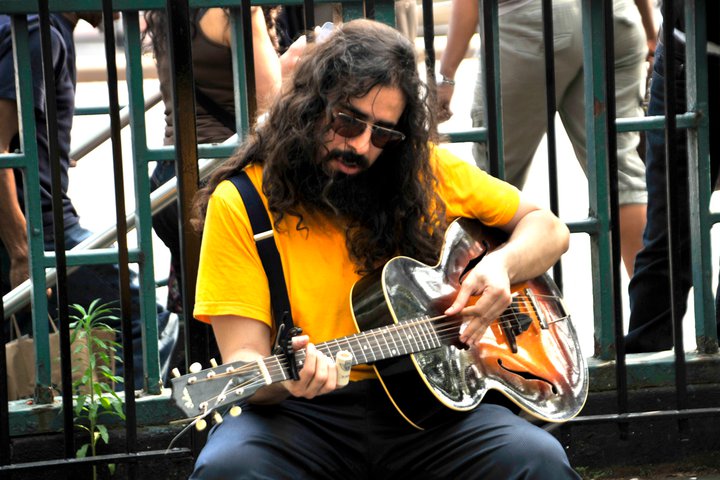 The recordings of Yazan are a clear window into the depths of this jolly man’s tragedy-stricken soul. His expressions are remarked by his instrumental mastery, vocal dynamics & body moving: when combined with his lyrics, contagious & chilling performances are created.  It’s the type of music you could listen to on a shitty automobile cassette deck and it’d still make you move – because it has a soul, a heartbeat.  Inspired by his own experiences and the Hill Country Blues, Yazan defines his own style.

The latest Yazan’s album “To undress your mind” (2013) is to strip it away of all incidental aspects -- your beliefs change, your thoughts change, your biases change, but underneath all of it, something remains eternally, and that is you, and you share that essence with all creation.

He recorded this album after 10 days of silent meditation, and after several years of rather noisy experimentation. The songs on it loosely tell a story of a life of alienation and sadness, and the transformation to a sublime sense of belonging in the world. This transformation came for him through music and through learning how to let him sing.

Yazan, when was your first desire to become involved in the blues & what do you learn about yourself from the blues?

I first heard blues singing when I was five years old, from the radio, and I've always loved soulful music, but it wasn't until I saw a video of RL Burnside playing “Poor Black Mattie” on an acoustic guitar that I decided I would try to learn to play and sing like that. His playing and his spirit moved me to make the acoustic guitar my main instrument after playing mostly electric guitars for many years. Learning to play and sing blues has helped me get in touch with my own spirit and my own divine self – through suffering comes growth and enlightenment!

How do you describe Yazan sound and progress, what characterize your music philosophy? 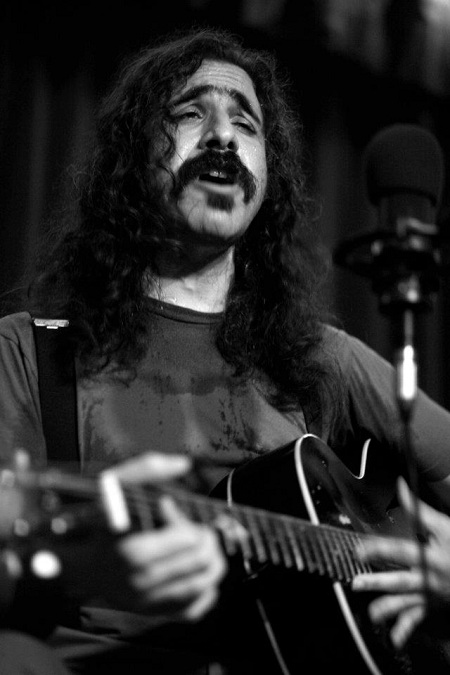 Learning how to play music has taught me about harmony as a general concept, not limited to vibrations of sound, but all vibrations of matter and energy. My music is gospel music of the universal spirit, a spirit of love and joy! Music reminds us to be playful, especially while we are working.

"True, pure music is loaded with spirit and feeling, and the mere performance of such music is a protest in the face of fear and anger!" Photo by Jack Hirschorn

What does the country blues, folk, and psychedelia mean to you?

Those are just categories for the music industry, to help people discover sounds similar to sounds they already like, but true spirit in music transcends those categories.

The country blues artists I've learned from the most are RL Burnside and Robert Johnson. To truly learn the secrets of the root of music, you must play at gatherings of people from your heart, not for money or fame, but to make people move and sing and dance! Those kinds of experiences are universal and eternal – you don't need to be in a juke joint in the Southern US in the 1920s to experience the root of music, it's always there!

This interview is probably the highlight of my career. Thanks Mixalis!

What experiences in life make a GOOD MUSICIAN and SONGWRITER?

Performance and songwriting are two separate skills that need to be developed independently. A good musician, above all else, listens to everything going around him/her, and weaves into that. Listening is the most important skill for good musicianship, I cannot overemphasize this point. Generally, it is not the experiences specifically that are important, but rather how you receive those experiences, and how you let them develop your sense of awareness. A truly nuanced musician and songwriter is highly self-aware, and similarly highly aware of the reactions and responses of others. 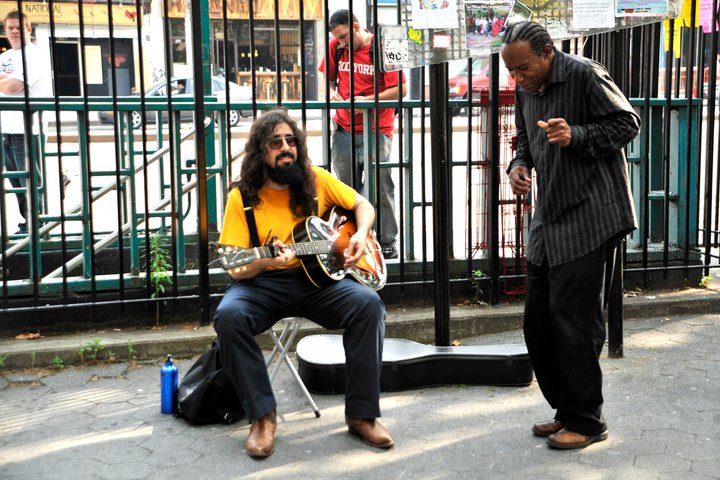 "To truly learn the secrets of the root of music, you must play at gatherings of people from your heart, not for money or fame, but to make people move and sing and dance!"

Everything is an inspiration in this world – it's a beautiful place! I would say that allowing myself to be so inspired by this incredible world has helped me to transform myself perpetually, and that is the key to producing inspirational art. Beauty and love are everywhere if you choose to see it!

The lyrics and the sounds of the blues are very close to the root of music – pure spirit. This is an eternal truth, and will always have power as a result. Spirit is everywhere and inside of everything!

What was the relation between music, folk blues poetry and activism?

In times of oppression and violence, acts of love become acts of protest. True, pure music is loaded with spirit and feeling, and the mere performance of such music is a protest in the face of fear and anger!

How do you describe your contact to people when you are on stage …and on the road?

I prefer to talk openly with crowds, to be myself, no matter how large or small the crowd is. Being yourself is the only way to really connect with other people, and performing my music for others is all about this connection. 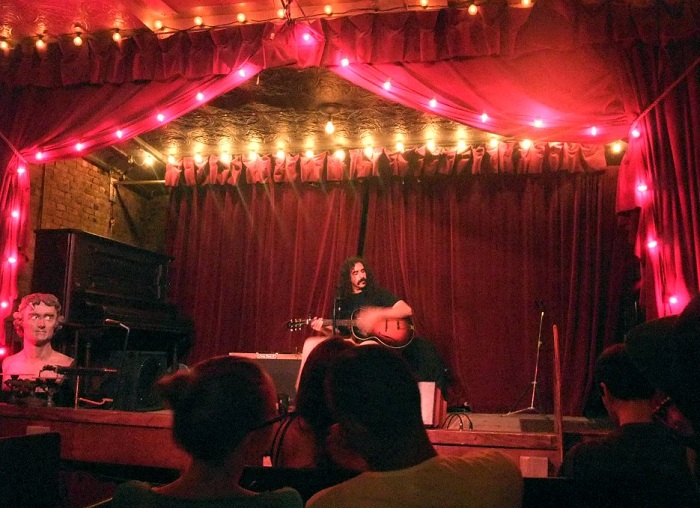 "Happiness is a choice! My dream is to be living my life right now – I am a very happy man." Photo at Jalopy Theatre and School of Music, by Christine Sullivan

Make an account for current realities of the case of folk blues in NY. Which is the most interesting period in local scene?

The Jalopy Theater in Brooklyn has a great folk scene! Some other Brooklyn bars and clubs also have really wonderful roots performers who are not simply trying to recreate the past, but rather creating something new and genuine by respecting past performers and sounds.

Every gig and jam is a divine experience. I don't remember any of them because I lose myself while playing!

Do you know why the slide guitar is connected to the blues culture & what characterize the sound of slide?

Slide is the sound of a voice, continuous and expressive, but also percussive and rhythmic!

Happiness is a choice! My dream is to be living my life right now – I am a very happy man. 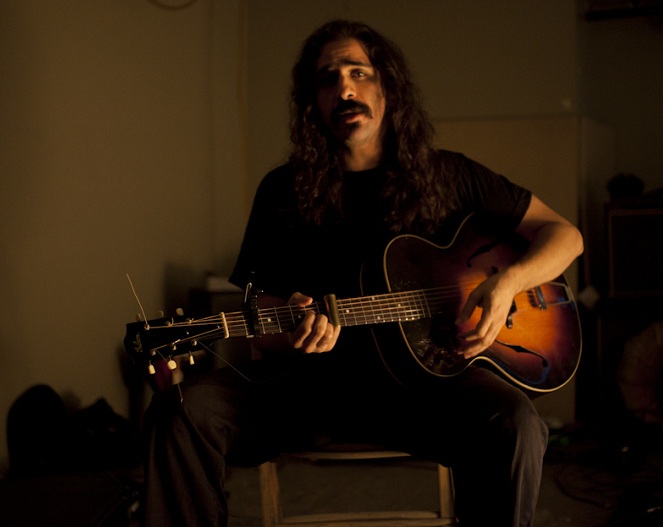