"Music could play a larger role in today’s political scene but that remains to be seen. Art also plays a big role by visually defining the contradictions in society." 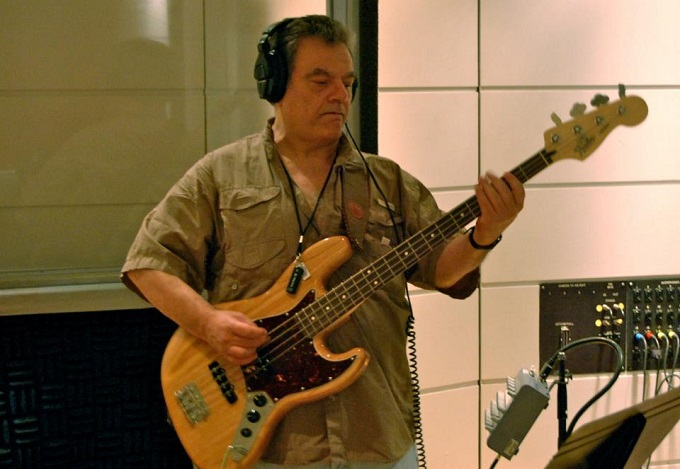 Fred says: “I've recently introduced my illustrations as a line of greeting cards and postcards. In my spare time I play bass guitar in a rhythm and soul band in New York City. I am an illustrator, specializing in Photoshop illustrations, as well as pencil drawings, photography and paintings. My work has won several awards from various groups, both in the US and Europe. Currently working freelance for a number of corporations that seek to communicate visually. My skills range from photoshop illustrations for movie posters, editorials, various print media to graphic design for meetings and events, PowerPoint production, Illustrator, Photoshop, My work is currently featured on a trend spotting web site.” Fred Caputi has used his illustrative talents to create animal and man photoshopping pictures which, depending on which one you are looking at, are eerie, disturbing or funny. The animal and man photoshopping experiment has led to some interesting results, such as the GOP elephant scaring me into turning away from my laptop as well as the frog waiting on the metro luring me back.

What were the reasons that you started the artistic researches?

I’ve been a graphic artist for 38 years, mostly doing corporate work. Over the years I have also created several album covers and band logos. I’m also a musician that’s played a lot in the NYC metro area. I know first hand how difficult it is for a musician to make a decent living. Blues clubs in NY have been closing because of high rents, which in turn makes it harder for musicians to make a living. I decided to combine my love for music and my talent for art and create a series of illustrations that musicians could use to promote themselves.

R. Crumb produced a series of illustrations called The Heroes of the Blues. He made these incredible drawings of the blues greats from the early 20th century. He used a heavily crosshatched, pen and ink style that seemed fitting for the era those musicians lived through. Those drawings really captured my imagination and still amaze me after all these years. Recently, I decided to emulate his work. As a musician I was drawn to the authenticity of the blues and I was lucky enough to have met and played with some of the best blues players of New York City. They were all so friendly and supportive of me and taught me so much about the genre. Coupled with the reality of how hard it was for these cats to make a living I thought I could pay them back by trying to support “live” music. So I made this series of illustrations in the same kind of style that R. Crumb used. With the use of social media most of these guys are using my illustrations as a marketing tool. Hopefully, in some small way, I would have helped them get a bigger following of fans seeing them perform. 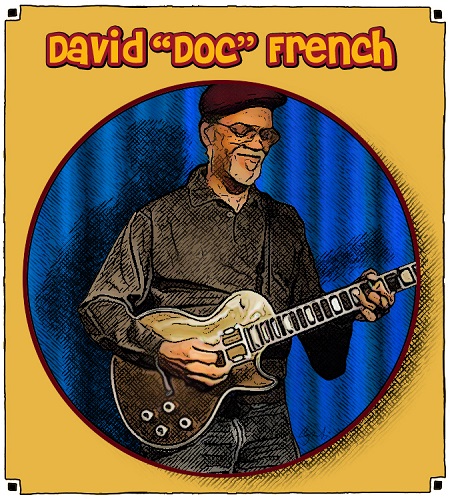 What characterize your artwork and philosophy?

This is a hard question. I don’t like doing the same thing twice. Take these blues illustrations for an example. They were very satisfying to create but I doubt I’ll use this style again for a while. My next project will be in a totally different direction style wise. Repeating myself is the easiest way for me to get bored. I like to be in the moment, where all things are possible, no restrictions about what to do next. It’s the same with music. Improvisation, by definition, is spontaneous; created in the moment. I try to bring that same sensibility to my artwork.

How has the ‘60s underground comics & culture influenced your views of the world and the journeys you’ve taken?

Growing up in the sixties (I was 14 during the Summer of Love, 1967) I, like many others, discovered Zap Comix, Mr. Natural, the Freak Brothers, etc.. R. Crumb was at the center of all this counterculture, underground media along with now famed artists Rick Griffin, Victor Moscoso, Alton Kelley and Stanley Mouse. They took images from our comfortable world and turned them upside down and inside out, creating a whole new way of looking at everyday things. Much like every artistic leap forward throughout history, they made people think and engaged their imagination. There are few things of a more fulfilling nature than to spark the imagination of another person.

Music is therapeutic; it fills me with an enchantment of emotion and memory. The word music comes from the Greek word μουσική (mousike), which means "(art) of the Muses”. It tickles my imagination and frees up passions that are buried from stressful city living.

If one can say that art is eye candy, a treat for the mind, then one could also say that music is ear candy, also a treat for the mind. Music can affect many senses at once, evoke emotions, jostle loose long forgotten memories and inspire new trains of thought. I always have music playing when I do my artwork and let it affect me or not. 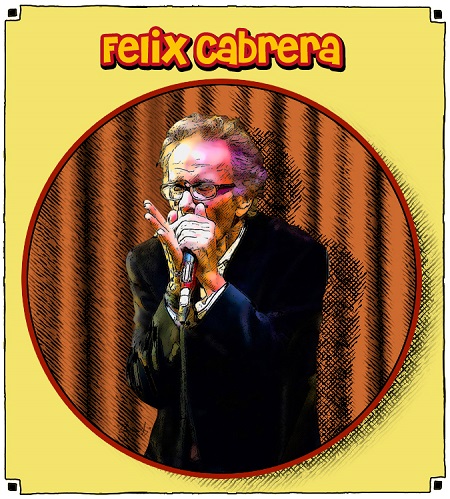 There have been so many that it’s hard to say. Plus not all learning experiences are pleasant. There have been a few people that were instrumental in helping me push through what I would call “portals”, doorways to the next level of my growth as a human being. Sometimes it’s fun, sometimes not so much but, in the end, always worth it.

When I was a young child I was drawing in a coloring book with my crayons. You know the kind with some sappy line drawings of firetrucks or tractors and you’re supposed to fill the shapes with color. An adult came to me and took the coloring book away and handed me a blank sheet of white paper and suggested I draw my own pictures. Best advice I ever got.

What do you miss most nowadays from the music and comic of past?

At the risk of sounding like a grouchy old man, a lot of music today really sucks. It lacks the honesty and integrity of the blues and early rock. Comics seem to be lacking in the same way. That being said, I’m listening to a lot of African music these days. The rhythms are new to my ear and they affect different parts of my soul than western music.

We use music and art as a way to voice or pleasure or displeasure with the way we conduct ourselves as a society. It’s difficult to consider this question without acknowledging what’s happening politically in the U.S. The uncertainty of the actions of our new President fills me with dread. Hopefully calmer heads will prevail.

If you could change one thing in the musical/comic world and it would become a reality, what would that be?

I would like to see the money people in the music industry invest more in the authentic, cultural sounds of a society. The U.S. is a relatively young society and our contributions to music culture is primarily the blues and jazz. I would like to see those celebrated more. 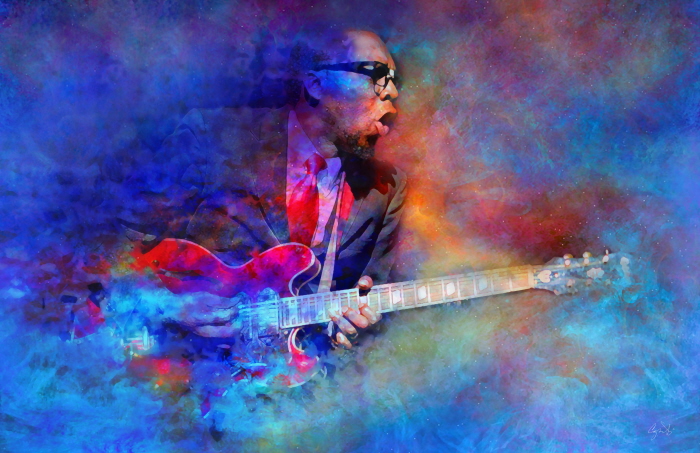 "Music is therapeutic; it fills me with an enchantment of emotion and memory. The word music comes from the Greek word μουσική (mousike), which means "(art) of the Muses”. It tickles my imagination and frees up passions that are buried from stressful city living."

What is the impact of Blues/Rock music and visual art to the racial, political and socio-cultural implications?

In the sixties, music played a huge role in shaping public opinion. I firmly believe that some songs actually were instrumental in helping end the war in Vietnam. Music could play a larger role in today’s political scene but that remains to be seen. Art also plays a big role by visually defining the contradictions in society. One only has to look at publications like Charlie Hebdo and many other political cartoonists across the globe.

What touched (emotionally) you from R.Crumb’s art?

There’s a certain element of nostalgia in R. Crumb’s work. It was nostalgic for him to celebrate musicians that were no longer alive when he immortalized them. The cross-hatch style he used was reminiscent of the way newspapers would depict portraits in newspapers in the early 20th century (photography wasn’t quite in use at the time.) It’s nostalgic to a degree for me to emulate Mr. Crumb’s work by celebrating today’s generation of blues musicians in a similar style.

What is the legacy of Mr. Natural and Freak Brothers todays?

There doesn’t seem to be a modern equivalent to Mr. Natural or the Freak Brothers. Maybe there should be. Maybe I’ll come up with something...! I would definitely want to go into the future. I’m not sure I would bring any music or books with me. Presumably they would still exist in the future. I would be eager to hear and see what future generations have come up with.

I would bring my sketchbook and my guitar. Sketch and draw with Dali and Picasso and play a couple of tunes with Muddy. No questions, just creating. Sounds like a fun afternoon to me!