"They are (Rock & Roll and Reggae) both music forms that tap into our hopes and dreams and reflect our experiences…and they make you want to dance and sing!"

Kim first began taking 35mm stills during her freshman year at UC Berkeley and covered the Free Speech Movement during her freshman year. In her sophomore year, she transferred to UCLA where she majored in Motion Picture Production, graduated with honors and worked as a teaching assistant in the film department. During that time, she began covering interviews and concerts for local underground papers. She also had her first television job shooting the ShaNaNa Show. She traveled extensively, lived in London for a year and then returned to Los Angeles to work for L.A. (a weekly underground paper) and Crawdaddy/Feature Magazine. She met her husband during the formation of Music World Magazine, where she served as photo editor. 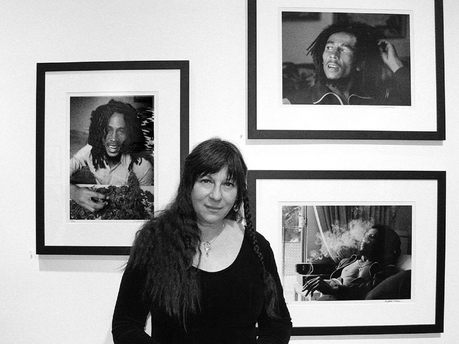 She was hired to shoot a small independent motion picture that was never released, but the script supervisor was Debra Hill, who went on to produce John Carpenter’s “Halloween.” She remembered Kim’s work and hired her to be part of John’s team. She also was the production photographer for “Cheers” and “Family Ties” as well as shooting for other Paramount television shows and for Steven Spielberg’s TV series “Amazing Stories” where she got to work with a different major director every week, including Clint Eastwood and Spielberg.

What has been the relationship between music and image in your life and projects?

Unfortunately, when I am photographing musicians performing, all my energy goes into my eyes and I do not really hear anything. Most of my early subjects were musicians.

I LOVE music of all kinds. I am fortunate that my husband stays current with the music scene and makes me CDs of all the favorite songs he finds so I can listen in the car when I'm rushing around. Music also plays a part in the novel I wrote about a young woman photographer in the 60s and 70s who photographs the counter-culture and music scene which I will publish later this year (it is called "Lenswoman").

From whom have you have learned the most secrets about the art, image and the music?

My mother taught me about light…to look for the way it reflects on bone structure and eyes. She worked as a photographer's assistant in the 1940s. There was always music in the house when I was growing up - mostly folk music and Broadway show tunes. My husband, Jeff Walker, who was the creator of Antilles Records when he was with Island Records in the 70s, has been my source of wonderful music for the past 40 years.

Every period of my life has been truly enjoyable. When I first started out, I shot for underground papers and Music World Magazine (where I met my husband) and shot everyone from Jimi Hendrix to Andy Warhol and Woody Allen. When Jeff went to work as head of publicity for Island Records in the USA and they needed photos of Marley and all their reggae performers, we traveled to Jamaica and spent time in Bob's home and traveling all over the Island shooting. That two year period produced my recent book "Bob Marley and the Golden Age of Reggae." Then I began shooting for motion pictures and television, shooting the stills for John Carpenter's early films Halloween and Escape from New York (a photo book I am currently working on) and then was the unit photographer for CHEERS and FAMILY TIES at Paramount over a 9 year period, including shooting some Star Treks and other TV shows. For the past two decades I have represented still photographers as an elected member of the national executive board of The International Cinematographers Guild.

What are some of the most memorable gigs and jamms you ever saw?

I wish I could remember them all…the photos ARE my memory! Photographing Jimi Hendrix in an interview and backstage at the Shrine Auditorium before his Los Angeles debut when I was 20 years old was very memorable. The High Times session with Marley was great because he usually hated to pose, but on that occasion we all had fun.

Meeting my husband as we created Music World Magazine was a pivotal point in my life. We became a journalistic team for many years and still are together after 3 children and many adventures together. Meeting Debra Hill when she was a script supervisor, who then went on to produce John Carpenter's early films was a turning point - she gave me my career in Motion Pictures and TV.

Are there any memories from Andy Warhol and Woody Allen which you’d like to share with us?

I remember Andy Warhol said almost nothing…he let his loquacious companions do all the talking…but I kept my camera on him until he reacted to one of their comments with a smile…which gave me a rare shot! I photographed Woody Allen doing his stand-up comedy routine and loved the variety of his expressions, though in person, he was also rather shy, as was Hendrix. I still think the late 60 and 70s produced the greatest music of the century and I still listen to the classics like the Beatles, Stones, Zombies, Animals, the Wailers, etc…I never got into rap. There will always be talented young musicians rising up and making wonderful music.

Seeing the next generation find love and make babies always makes me smile and touches me. I have many god-children and I take my job as Fairy God Mother very seriously!

I am very involved with politics, though the devastation the republicans have been causing in our government, fighting everything President Obama has been trying to do to help the country with job creation and healthcare, makes me very angry and emotional. I am also very involved with my union and helping all of my brother/sister camera people with the problems they face on the set.

How would you characterize the philosophy of Kim Gottlieb Walker?

I would like to have a positive influence on whoever I encounter…I hope my photographs will preserve moments in time worth revisiting and remembering. My philosophy in photography is that it is a mutual gift between the photographer and the subject, the opposite of what a paparazzi does. I think our purpose in life is to try to make the world a little better by our presence in it, in whatever way we can. Kim Gottlieb-Walker and her husband Jeff Walker, who was the creator of Antilles Records

My mother advised me to have no expectations - a very difficult thing to do…but then, when good things happen, it is always a welcomed surprise. My own advice to the next generation - Be kind. Be generous. Educate yourself and be informed about what is going on in the world and in your country so you can get involved and vote... Do what you can whenever you have the opportunity to make a difference for good in the world. For photographers? LABEL everything so 40 years later you will know who you photographed, when and where!

Which memory from Isle of Wight Music Festival 1971 and your travel in Jamaica makes you smile?

I loved covering the Isle of Wight - such a variety of subjects in both the performers and those attending - I photographed Donovan and Joni Mitchell and Lovin' Spoonful and had a great time - and I loved teaming up there with writer Robert Greenfield. In Jamaica - The warmth and welcome we received in Jamaica everywhere we went and the delight everyone had meeting my "Rasta" 3 year old and discussing philosophy with him and traveling with young Cameron Crowe, who is every bit as sweet as the main character in "Almost Famous."

Why did you think that the Rock & Rock and Rasta culture continues to generate such a devoted following?

They are both music forms that tap into our hopes and dreams and reflect our experiences…and they make you want to dance and sing! 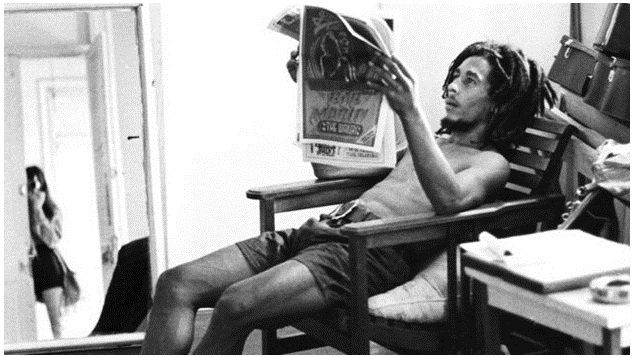 Bob Marley and Kim (reflected in the mirror) at Bob's house, 1975. Photo © by Kim Gottlieb-Walker

Do you remember anything funny from Bob Marley?

I just remember enjoying every minute of shooting. Bob especially enjoyed posing for the cover of High Times Magazine…and got a kick out of spending time with my 3 year old son, who considered himself a Rasta…it gave Marley a good laugh.

Which incident of music history and personality you‘d like to be captured and illustrated in a photo of you?

Me as the flower child I was and still am, surrounded by those I've photographed over the past 50 years

I think I've lived my life very fully…as long as someday I get to have grandchildren, I will have led a very happy and fulfilling life. It would be hard to relive any of the wonderful days of my past and then have to return to being 66!