"The blues was born on slave ships, in cotton fields, on chain gangs. As the saying goes, the blues had a baby and they called it rock n roll. Rock n Roll has long been a platform for speaking out against authority, against inhumanity, corruption, racism, sexism, and injustice."

Eric McFadden is a virtuoso of the six-string. Eric McFadden has a great musical pedigree that has allowed him to master many styles and genres of music. He refers to his own performances as a “therapeutic musical experiences for the audience and himself.”  He’s brought that experience to the music of others - most recently as the featured guitarist in Anders Osborne’s Band; and prior to that, stints with the legendary George Clinton and Eric Burdon’s bands. McFadden has collaborated on stage and/or in studio with the likes of blues great Bo Diddley, Keb Mo’, Living Colour, Joe Strummer, Les Claypool, The Meters, Robert Walter, Bernie Worell, Bonnie Rait, Bill Kreutzman, Ron Wood & Chuck Leavell, North Mississippi All Stars, Pete Sears, Joe Santiago & Dave Lovering, Widespread Panic, Jackson Browne, Fishbone, Mike Watt, The Reverend Horton Heat, Edward Sharpe & The Magnetic Zeros, Grace Potter, Galactic, Jack Johnson, Steward Copeland, among others. 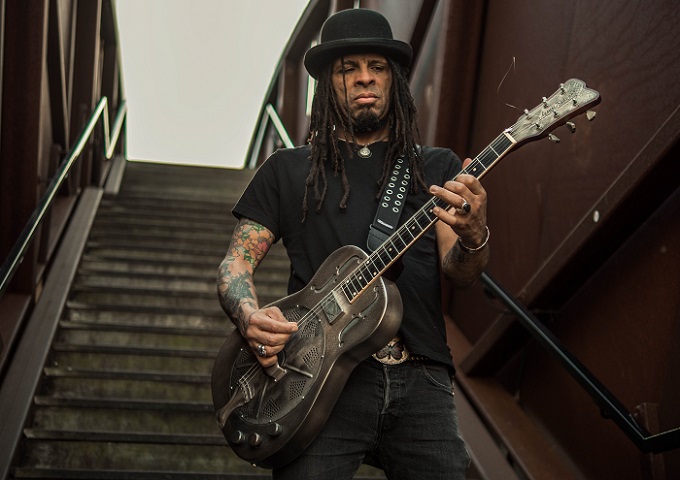 McFadden is a member of the supergroup, T.E.N., alongside Thomas Pridgen and Norwood Fisher. Eric has also collaborated with Fishbone front man, Angelo Moore and Queen delphine on a project called Tasty Face. In the past, McFadden toured extensively with the Eric McFadden Trio (EMT), which featured bass phenom James Whiton and the great Paulo Baldi. Eric was also a member of the all-star band, Stockholm Syndrome, which included notable players such as Dave Schools, Jerry Joseph, Wally Ingram and Danny Louis. Whiskey Bayou Records proudly releases Pain By Numbers (2018), the new album by acclaimed guitarist-vocalist, Eric McFadden. Produced by famed musician (and Whiskey Bayou Records co-owner) Tab Benoit, “Pain by Numbers” is twelve tracks of dark gospel, compelling rock, and dirty blues. Encompassing three decades of recording and performing live, McFadden has created his own original style. His music is dirty, his guitar is dirty, and his attitude is dirty.

From an early age I have identified strongly with the sentiments, views and attitudes expressed in rock, blues and punk. It gave me a sense of identity and helped to mold who I am. I was compelled to pick up a guitar and find my voice. I found out I had some shit to say, and I wanted to say it my way. Beyond it’s cathartic or therapeutic qualities, music has also served as a forum for taking social and political stances, for speaking out against injustice, standing up for the underdog, for holding authority accountable. Historically, artists have been the voice of the people, in these regards. But it rock n roll is also good time music. It’s also escapism, ass shakin’ rebellion. It’s a way to shake off the pain of life and retreat into a better place.

Not sure how to describe it. I suppose my music is simply a culmination of my musical influences and life experiences. I grew up on rock n roll and also gravitated to the blues, flamenco, punk, funk, jazz, soul and other stuff. My primary objectives have been to find my own voice, and to be genuine in what I do. I’m driven by the need to create and express myself. I’m inspired by what I love, what I hate, what I’m indifferent to, heartache, drugs, addiction, death, religion, ice cream, sex, beauty, corruption, politics, pigmy goats. A guy named Pete Sivalia, who I hung with in Syracuse, NY when I was 17, really expanded my horizons.  He was out there, and I liked that. George Clinton changed the trajectory of my life and career when he recruited me into P-Funk. That was a transformative and educational experience. My time with Eric Burdon was an important part of my experience.  Some good advice? Don’t let the bastards get you down, play every show like it’s your last, git in where you fit in, be nice, don’t eat the yellow snow.

Too many, but the first ones to come to mind would be a recording session at Hyde St. studios in San Francisco in 1998 w/ George Clinton and members of P-funk, Weapon of Choice and my band, Alien Lovestock, which went until the following day. That was a magical session, and my first time working with George. My 2nd gig in Paris in 2007 was a truly memorable experience. I was very emotionally overwhelmed by the standing ovation, and chanting of my name. I had never experienced that before. Playing with P-Funk at Fuji Rock in Japan 2002, then hanging out with Joe Strummer till the wee hours in the Fuji mountains.

Recording the, Alektorophobia, at Prairie Sun studios in Cotati, CA was quite the experience. The studio was on a chicken farm, so Wally Ingram and I lived among the chickens  for a week while recording this record, and had a cast of friends come through everyday and track with us. Among them were, Les Claypool, Keb Mo, James Whiton, Nels Cline, Pete Sears, Robin Coomer, Sam Bass, Juan Nelson and Chris Haugen. Oz Fritz was our zen-gineer. I believe the ghost of Alister Crowley was on the premises, and we may have spotted la chupacabra in the bushes. We drank all the whiskey in the county. We felt obliged. There was an incredibly memorable 24 hours in Siberia with Omar Torrez that I can’t even talk about.

Carl Dufrene and I toured with Anders Osborne together for a while. One year between sets at Telluride Blues n Brews Festival, we decided to throw an impromptu late night jam. Tab Benoit came out, and he jumped on drums for one of my tunes. That was the night we first talked about him recording and releasing my record on Whiskey Bayou, so that was another turning point.

I believe there is still great music being made now, just as there was in the past, but with modern technology, it is easier to create the illusion that you can play. I suppose I miss the days when everyone went to see live music, especially if it was something new, or someone you’d never heard of before. We are so saturated with music now, that it’s often hard for the cream to rise to the top. The real shit is often buried under piles of rubbish, and is generally not supported by mainstream radio or the music industry. It often requires a little digging to get to it.

I hope that more young people will allow themselves the transformative experience of hearing live music performed by actual humans, playing actual instruments. There is no substitute for live music. I also hope that people will again come to recognize and appreciate the value of music, and start paying for it more often as to make it easier for musicians to create and survive. I hope that the industry will begin to treat musicians more fairly. My fear would be that none of this comes to be. 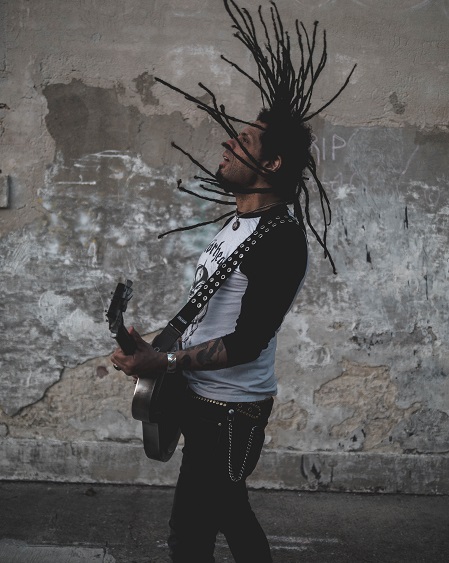 "I suppose my music is simply a culmination of my musical influences and life experiences. I grew up on rock n roll and also gravitated to the blues, flamenco, punk, funk, jazz, soul and other stuff. My primary objectives have been to find my own voice, and to be genuine in what I do. I’m driven by the need to create and express myself."

Do you consider the Blues a specific genre or do you think it’s a state of mind? What touched (emotionally) you?

For me the blues is about a few things, but I feel you need to be speaking from a place of pain and experience. It’s born of suffering, but is not necessarily without optimism. It’s more of an emotionally driven thing than a genre or an idiom, though it is both. Without the genuine emotional content, it isn’t the blues. I want to hear your heartbreaking. I have a pretty expansive idea of what the blues can be, musically speaking. I’m no purist.

What are some of the most important lessons you have learned from paths in music circuits and industry?

It’s about attitude. A friend and mentor, Mikey Wright, was the first person I can remember telling me this when I was 11 years old. The difference between one great player and another getting the gig, is attitude.

The blues was born on slave ships, in cotton fields, on chain gangs. As the saying goes, the blues had a baby and they called it rock n roll. Rock n Roll has long been a platform for speaking out against authority, against inhumanity, corruption, racism, sexism, and injustice. Sadly, the USA is now living in a kakocracy, which is to say, we are being ruled or governed by the worst element of society. If ever there has been a time in our history where we’ve been in grave danger of losing any promise of democracy, it is now. This is no time to stay silent. It’s time to get loud.

That’s a tough one. I think it would have been cool to hang with Chopin and see him play in a Paris saloon in the 1840’s. Maybe the Beatles at the Cavern club in 1962. Maybe go back to 1933 and jam with Charley Patton and hang with him for the day. Landing on the moon in 1969 might be interesting. Maybe going as far back in time as possible to be able to hear the first music ever created is the way to go. When and Where would that be, I wonder. 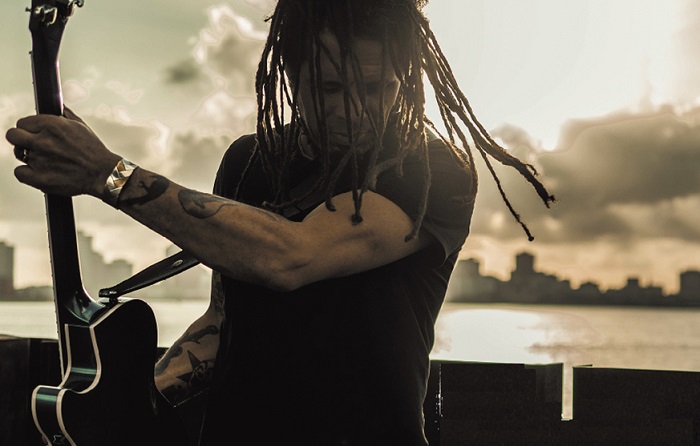