"It’s a documentary of life, from my ancestors. You’re living a life. Blues were originally played and sung, because they were in slavery. That’s where it comes from, pain."

Born in Mississippi and raised in Memphis, Tennessee, Linsey Alexander discovered a down to earth city that truly understands and appreciates music on Chicago's southside. In much the same way as many great blues artists before him, he grew up in a poor but honest and hard working family, learning early on that music has the power to lift the spirit and comfort the soul. In Linsey's own words, "Blues is not hard- it's just a documentary about life." His first guitar - a gift from a family friend who played on the front stoop of Linsey's home in Memphis - was never retrieved from the pawn shop where he left it almost 50 years ago. Using the money to help pay his way to Chicago, he now plays a variety of Gibson and Fender guitars. Since 1959, Linsey Alexander has been perfecting the art of entertainment blues for the sheer and simple pleasure of it. His easy smile and unpretentious personality define a charismatic entertainer who loves to perform; and perform he does!                    Linsey Alexander / Photo by Vincent Villemaire 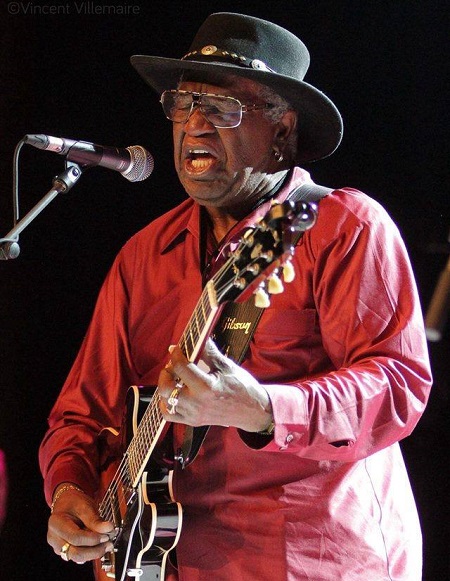 Although having played with B.B.King, Bobby Rush, Buddy Guy, Little Milton, Magic Slim, Johnnie Taylor, A.C.Reed, Larry McCray, Bither Smith, John Primer, Otis Clay, Eddie Clearwater, and other great blues performers, Linsey Alexander has remained resolutely true to his own style. His earlier CD's released, "Someone’s Cookin' in My Kitchen," "My Days Are So Long," and "If You Ain't Got It" are all three compilations of original Blues and R&B tunes. Alexander has been to 10 countries and all across America spreading the joy of blues.

He is thankful for the good things in his life, and now at last, seems willing to realize that the friends that encouraged him to keep playing over the years may have known a thing or two about talent. Linsey has "never truly believed in himself" until now; Now, he is ready to believe. In 2012, He signed with Delmark Records and recorded his first international CD, "Been There, Done That." Linsey's recent CD, "Two Cats" by Delmark Records released in 2017.  Linsey Alexander was inducted into the Chicago Blues Hall of Fame June 8th, 2014.

It’s a documentary of life, from my ancestors. You’re living a life. Blues were originally played and sung, because they were in slavery. That’s where it comes from, pain.

How do you describe Linsey Alexander sound and songbook? What characterize your music philosophy?

Things that happen in the world, have happened, and are still happening. That’s what I write about, life.

Why do you think that Delmark continues to generate such a devoted following? what touched (emotionally) you?

Well, Delmark, like any other venue, they are out to make money and the way to make money is to keep signing good artists. They are a good company.

That whatever you do, its better to do what you got to do when you’re young, because you don’t have but one chance in life to do what you have to do. A police officer gave that advice to me. 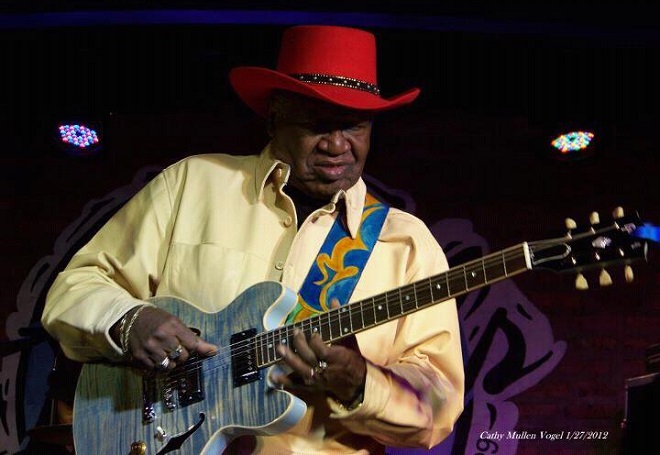 "The blues have been great to me and given me a great way to live. I am glad to wake up and live each day." (Linsey Alexander on stage / Photo by Cathy Mullen Vogel, Chicago IL 2012)

The artists that play the blues today are mostly not real blues artists. The blues are being played now by artists that go back to real artist’s songs and make them over, trying to get credit for it. I hope that the young blues artists don’t try to change the blues, just play it.

That credit be given to the black artists that make the music, not to someone trying to remake it.

What is the impact of Blues music on the racial, political and socio-cultural implications?

Blues don’t affect anything. The blues are telling a story of what happened and what is happening.

The blues have been great to me and given me a great way to live. I am glad to wake up and live each day.

No place special, as long as I’m living my life and I have a good time when I get there. 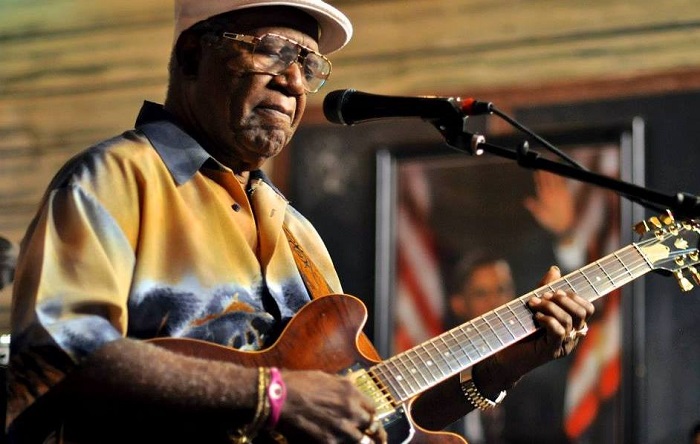