Q&A with Colin Hart, the former Deep Purple and Rainbow tour manager devoted over thirty years of his life to these great rock musicians.

"I think music is still having the desired affect on people. It can take away sadness, bring people together, express love and hope. There is nothing quite like a stroll down a musical memory lane to stir the emotions."

In July 1971 Colin Hart, a Geordie lad from South Shields, was on his first tour of America as a roadie for Matthew’s Southern Comfort. The group was part of a three-band bill with The Faces and Deep Purple. Following the tour he joined Deep Purple’s road crew. Ian Gillan just knew Colin had to join the Purple entourage after seeing him pour a pint of beer over Rod Stewart! Colin devoted over thirty years of his life to these great rock musicians. This is his story and indeed theirs. A tale of excess in terms of greed, petulance, anger and devotion. It is counter balanced by extremes of pure talent, showmanship and, of course musicianship. He was the constant ‘man in the middle’ through all of the break ups, make-ups and revolving door line-up changes. Joining them at twenty-four years old and leaving thirty years later, he was there every step of their rock ‘n’ roll way. A story of two of the most innovative, often copied, rock bands; seen through the eyes, ears and emotions of their ‘mother hen’ (as Jon Lord described him). He was their minder, chauffeur, carer, provider, protector, father confessor & confidant. In truth he is the only one who can tell this tale of both bands as he was the only one there on the road throughout the life of, not one, but both gigantic bands. 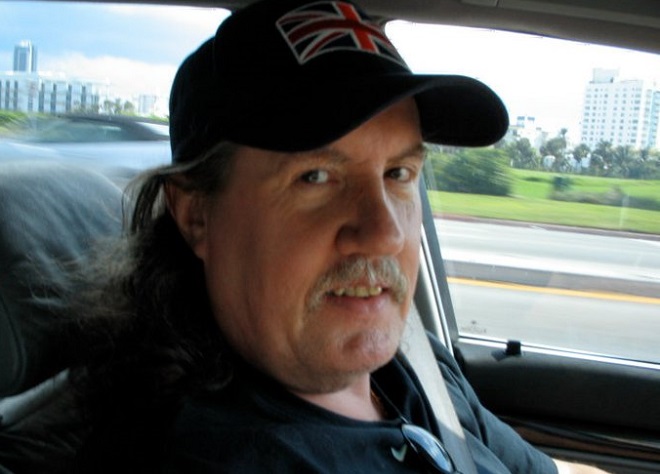 Hart endured a roller coaster ride, working for Purple, during the band’s most successful period. He was there when the casino burnt down in Montreux, and witnessed Smoke On The Water being born; the legendary concerts in Japan; the break-up of the Gillan / Glover line-up; the auditions that saw David Coverdale join the band, and the California Jam performance in front of 400,000. When Ritchie Blackmore left Deep Purple in early 1975 and formed Rainbow, Colin went with him and continued as Rainbow’s tour manager through the ever-revolving line-ups. He was invariably the man who had to break the news to many of the hopefuls that auditioned for the band: “We’ll get back to you” being the stock reply! In 1984 when Blackmore disbanded Rainbow for the Deep Purple reunion, Colin naturally resumed his role with these rock giants as they embarked on a world tour that included the hugely successful 1985 US leg – the second biggest grossing US tour that year after Bruce Springsteen. A déjà vu situation occurred as Colin was in the middle of yet more band break-ups as first, Gillan departed, Turner joined, Gillan returned and Blackmore departed, while Steve Morse emerged to take the band into the new millennium, although for Colin his thirty years on the road with two of the biggest bands in rock history came to an end in 2001. 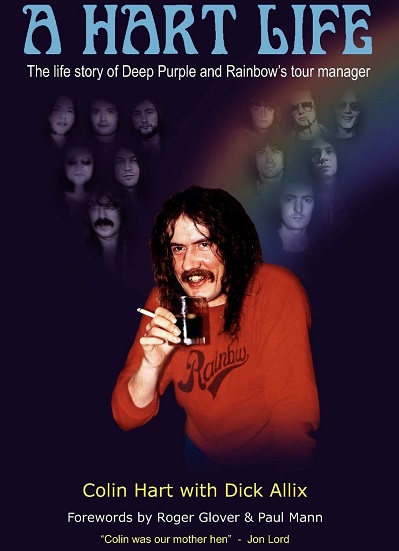 Hart tells the story of his life from humble beginnings in South Shields, to setting up home in California with Rainbow, and eventually settling in Florida, where he still lives today: Of touring the world several times over with two of Britain’s greatest bands Deep Purple and Rainbow; a story that also crosses paths with Jimi Hendrix, George Harrison, Elton John, Eric Clapton, Led Zeppelin, AC/DC, Def Leppard, The Scorpions and Iron Maiden to mention just a few! A truly fascinating insight into the world of rock ‘n’ roll from the other side of the stage. This is his story and indeed theirs. A tale of excess in terms of greed, petulance, anger and devotion. Must read Rock n' Road book!!

Well, in the 60’s it certainly shaped my appreciation of music with the emergence of The Beatles and a whole new generation of great bands from the UK and USA. It was these influences that steered me towards the music business and although I was not much of a talent musically, I wanted to be in and around it all. I was very fortunate to be able to survive an entire career in the business.

What were the reasons that made the UK in 1970s to be the center of Hard Rock Blues researches and experiments?

After the explosion of the 60’s music scene, Woodstock, etc., everyone wanted to be in band and be better than the ones that came before. The UK was exposed very early on to American greats and influences which created a magical mix of talent.

I have met so many great people throughout my travels, but without a doubt, the best personal meeting was George Harrison, who I met on several occasions. He was my musical hero during the Beatles days and then his solo days. He was so “normal” and calm.

I had lots of advice over the years too, some of the best came from my parents, but when we toured with Jethro Tull, their tour manager Andy shared a few ways of dealing with difficult people and situations in the business, which stuck with me through the years and came in very handy. I never really got to thanks him, so thanks Andy! 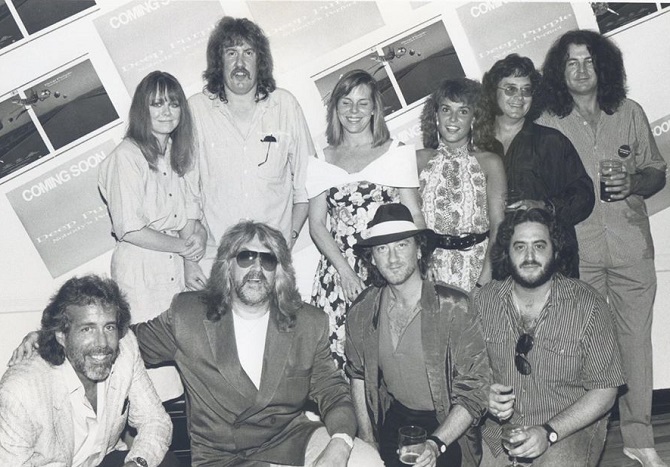 "After the explosion of the 60’s music scene, Woodstock, etc., everyone wanted to be in band and be better than the ones that came before. The UK was exposed very early on to American greats and influences which created a magical mix of talent." (Photo: Deep Purple, launch party for the live album Nobody's Perfect. 1988)

I miss all the bands and songs from the old days and still listen to classic rock stations and my selection of old albums. Some of the rap and pop stuff of today is beyond me and I can’t distinguish one from another sometimes!

What has made you laugh and what touched (emotionally) you from the life on the road and tours?

There were so many laughs along the way with all the bands I have worked for. It was essential to have a good sense of humour to survive what the business could throw at you. One of my favourite storytellers was Jon Lord, who could make me laugh so hard, it hurt!

As far as emotional moments, there were many of those too. It seems every time we lost someone in the business or at home when we were away, it was a wrenching experience.

Wow, that’s a tough question! I have learned so much from so many. I think I learned how to keep 5 very different personalities happy and tried to make it look easy, however hard it may have been and smile while doing it! 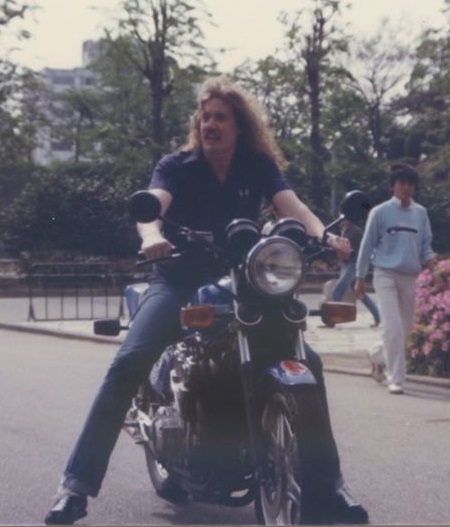 "I miss all the bands and songs from the old days and still listen to classic rock stations and my selection of old albums. Some of the rap and pop stuff of today is beyond me and I can’t distinguish one from another sometimes!" (Photo: Colin Hart,  Budokan/Tokyo Japan)

I think music is still having the desired affect on people. It can take away sadness, bring people together, express love and hope. There is nothing quite like a stroll down a musical memory lane to stir the emotions.

Japan again. One of my favourite countries in the world. Great people, food, efficiency.