"I guess that I regret seeing blues get removed from the regional life experiences that created it. I fear that it is and will continue to be more homogenized."

When Steve Howell first heard Mississippi John Hurt's happy style of fingerpicking country blues in 1965 at the age of thirteen, he immediately knew that the tame, folky style of strumming the guitar was a thing of the past for him. This revelation opened the door to a new musical universe for him. As his journey progressed, Mississippi John Hurt begat Blind Willie McTell and Leadbelly. They in turn begat Robert Johnson, Son House, Rev. Gary Davis, Blind Willie Johnson, Blind Blake and a host of other black acoustic guitar players and vocalists. His interest in rural, folk-blues styles and the history of the music led him to learn more about how this music came to town and melded with the horn-oriented bands prevalent in the cities, creating a strong affinity for him with the traditional jazz and New Orleans music of the first half of the twentieth century. This led to a journey through music which, of course, included the pop, country, rock and blues music of the times, as well as the music of Miles Davis, Bill Evans, Lester Young, Louis Armstrong, and many other great jazz artists. 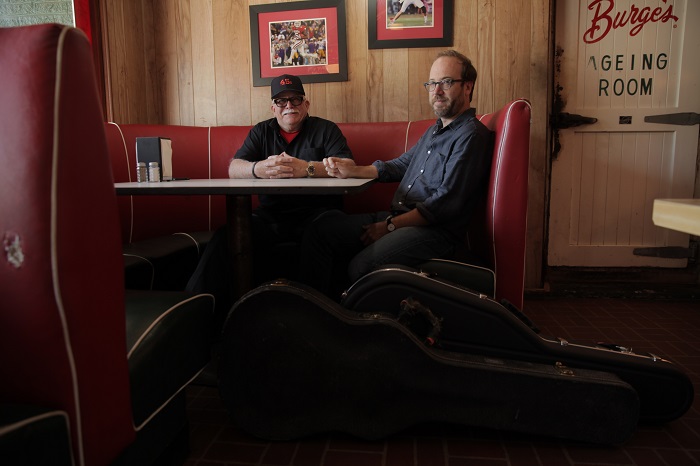 Photo: Steve Howell & Jason Weinheimer / The album title “History Rhymes” is taken from a quote from the father of American literature, Mark Twain: “History doesn’t repeat itself, but it often rhymes.”

Although very interested in many other music styles (bebop, rock 'n' roll, rhythm and blues, and others), the heart of his playing and singing is very much rooted in the rural acoustic blues and traditional jazz genres born in the American South. Born in Marshall, Texas, Steve Howell, has opened for Country Joe and the Fish, Anson Funderburgh and the Rockets, Bugs Henderson, Ponty Bone and the Squeezetones, and shared the stage with blues legend Brownie McGhee. Steve Howell has accomplished that elusive goal of music archivists: making classic songs from a bygone era relevant and vital again through his recordings, publications and performances. The East Texas guitarist recently published a guide, “Fingerpicking Early Jazz Standards,” and is now set to release his eighth album “History Rhymes” (2019). Howell is joined once again by like-minded souls – Jason Weinheimer(bass), Dan Sumner (guitar) and David Dodson (mandolin and banjo) – on a deep dive into the great American songbook. Steve Howell & Jason Weinheimer on new album “History Rhymes” honors the tradition of great American writers and their undaunted spirit.

What do you learn about yourself from the blues and jazz music and culture? What does the blues mean to you?

The common emotions and life struggles that are shared by all people. I consider the blues to be the indigenous music of a significant segment of the population in the region of the United State where I grew up and currently live.

How do you describe Steve Howell sound and songbook? What characterize your music philosophy?

Most of what I try to do musically is to lend my personal touch to songs that I love and think have high value, while always trying to make progress on my instrument and through my interpretations of tunes that represent a musical legacy that I want to honor. My musical philosophy is rooted in striving for a high level of musicianship while plugging into what I consider to be the highest aesthetic of music.

What were the reasons that you started the fingerpicking country blues and roots researches and experiments?

I began as and still consider myself somewhat of a folk musician and have always been interested in the origins of the music we listen to today. Once you start that process, one things leads to another and continues to do so. I’ve always been drawn to fingerstyle guitar playing because it provides what seems to me to be a more complete sound and a more pianistic approach. 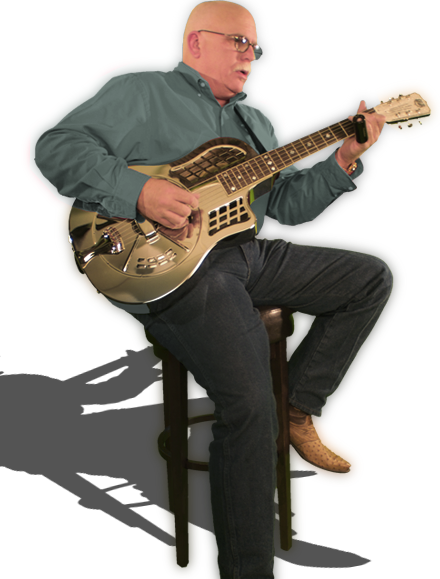 What touched (emotionally) you from fingerpickin' and slide guitar? What are the secrets of slide and fingerpickin'?

The fingerstyle approach provides a way to arrange tunes in a very musical way that relies heavily on the melody while layering different moving parts for embellishment, as well as a great approach for melodic improvisation.

Slide guitar provides a way of combining that “human voice” sound and solid rhythm. There are no secrets other than to stay close to the essential root and work hard at it.

How has the Blues, Roots and Jazz influenced your views of the world and the journeys you’ve taken?

The major components of blues, roots and jazz music plug into the essential aspects of the human condition and the common bonds felt by us all.

What were the reasons that you started "Fingerpicking Early Jazz Standards" researches and experiments?

The arrangements published in "Fingerpicking Early Jazz Standards" (Hal Leonard) are the result of my life-long love of the songs covered in the book. Attempting to create fingerstyle guitar arrangements of these great old American songs is something I have done for many years and my efforts to arrange them in a way that would be a suitable tribute to the songs and the composers and lyricists resulted in the arrangements presented in the book.

How do you describe "History Rhymes" songbook and sound? What has made you laugh from studio's sessions?

On “History Rhymes,” we wanted to present some of our favorite tunes in an authentic way with each song standing on its own, while at the same time pointing up the common thread contained in most music from the era. We always have lots of laughs in the studio because we all enjoy recording so much. It would be hard to single out one episode.

What was the hardest part of recording an album with classic Standards from the first half of the 20th century?

Making sure that the arrangements are a faithful tribute to the originals, while making them compelling enough to show the timelessness of the sings. 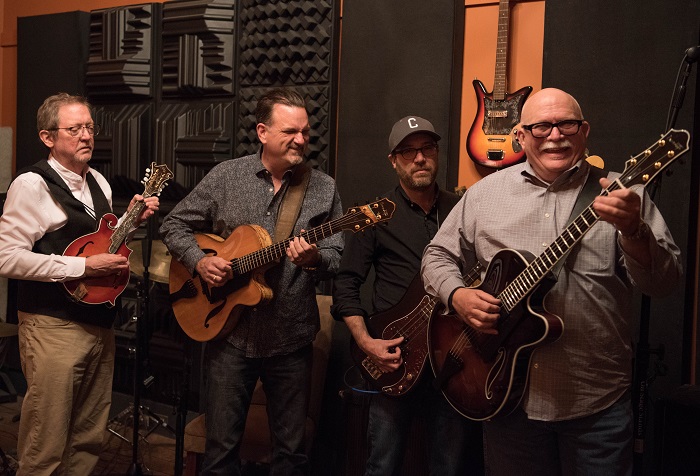 "I lean more in the state of mind direction. I think that staying in touch with our history and our roots is just as important personally and collectively as it is musically." [Photo: Steve Howell (guitar), Jason Weinheimer (bass), Dan Sumner (guitar), and David Dodson (mandolin & banjo)]

Why is this subject matter important today? How do you want it to affect people and the music nowadays?

I think that the subject matter of these tunes is just as relevant today as it was when it was originally written. The themes of love found and lost and the basic struggles and triumphs of all of us resound in these old songs. I hope that this will be recognized by people today just as it was then.

Do you consider the Roots music a specific music genre and artistic movement or do you think it’s a state of mind?

I lean more in the state of mind direction. I think that staying in touch with our history and our roots is just as important personally and collectively as it is musically.

How do you describe your previous album "Good As I Been To You" songbook and sound? Where does your creative drive come from?

The songbook for this record is drawn from the 1920’s and 1930’s country blues repertoire with a couple of rearrangements of pop music hits from the 1960’s. My creative drive comes from my lifelong love of a wide range of music and my fascination with fingerstyle guitar playing.

Are there any memories from "Good As I Been To You" studio sessions which you’d like to share with us?

My memories of these sessions are centered around the way we came together so quickly on all of the tunes and each contributed significantly to the arrangements and interpretation of the tunes. 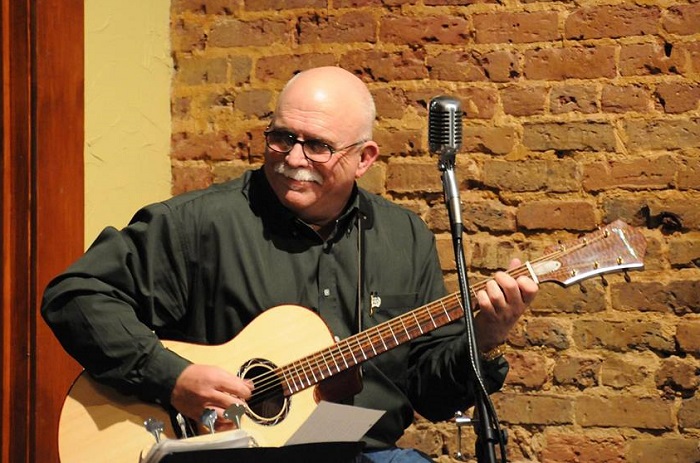 "It would be that we would clearly see how the musical genres are related rather than how they are different. This separation on creates division, not unity."

The guys who play in my band have been some of my most important musical acquaintances. We have been playing together for 30 years, in the case of two of them, and 20 years in the case of the third one. I also was lucky enough to play with and record 3 records with the great Joe Osborn. He is arguably the most recorded electric bassist in history. He was a member of the famed Wrecking Crew in Los Angeles and worked with everyone from Ricky Nelson and Johnny Rivers to The Mamas & The Papas and Simon and Garfunkel. I have learned very much from him. The best advice he ever gave me was to remember that, as a guitarist, “the music is in the right hand.”

I guess that I regret seeing blues get removed from the regional life experiences that created it. I fear that it is and will continue to be more homogenized.

It would be that we would clearly see how the musical genres are related rather than how they are different. This separation on creates division, not unity.

What are the lines that connect the legacy of Blues with the traditional Jazz, Folk and New Orleans music? The regional experiences in the American South.

"The common emotions and life struggles that are shared by all people. I consider the blues to be the indigenous music of a significant segment of the population in the region of the United State where I grew up and currently live."

What are some of the most important lessons you have learned from Leadbelly's life and your paths in music?

Stay out of jail!

They have all been great in their own way.

What has made you laugh from Country Joe and what touched (emotionally) you from Brownie McGhee?

Country Joe made me laugh because the entire time he played, he had a huge plastic housefly stuck to his guitar. Brownie McGhee touched me as he played because of the deep roots he represented.

What is the impact of Blues & Jazz music and culture to the racial, political and socio-cultural implications?

The impact of unifying people by concentrating on what we all have in common rather than our differences.

I would like to go back to November 23, 1936, to San Antonio, Texas, and Room 414 of the Gunter Hotel, to hear Robert Johnson record the songs that have been so influential to me.