"I think blues music would have a much bigger audience if this music would get more air time in radio and television. Younger people just don’t find this music."

Helge Tallqvist is a Finnish diatonic & chromatic harmonica player, founder of Helge Tallqvist Band. Groovy blues with a killer band and a young outstanding lady on the vocals. Ina's voice is amazingly strong possessing a lot of unprejudiced courage as her distinctive style brings freshness to the songs. The other band members are well-seasoned professionals in the blues genre, and the outcome is a smooth combination of strong experience and young open-mindedness. Finland’s representative in the 4rd European Blues Challenge in Riga Latvia (2014) was Ina Forsman & Helge Tallqvist Band. The band comprises: Ina on vocals, Helge on harmonica, Jonne Kulluvaara on guitar, Iiro Kautto on bass and Harri Ala-Kojola on drums. The band is really convincing in live performances and on record; they published their first album ‘Ina Forsman with Helge Tallqvist Band’ (2013), and in a short time they have managed to gather quite positive attention.  Photo by Frank Nielsen 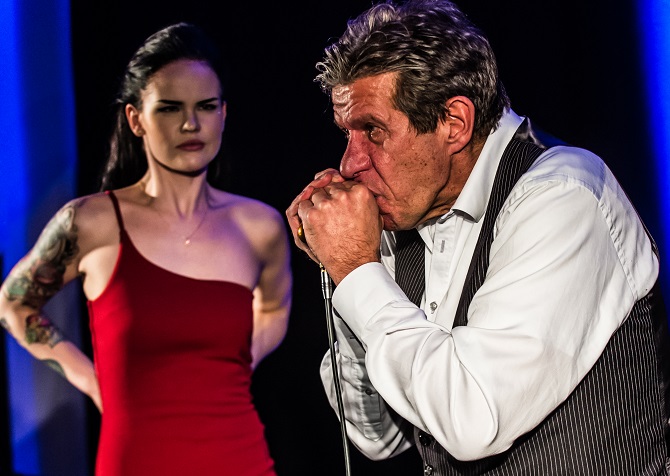 The band shows a very rooty swinging blues. The software comes with Slim Harpo, Magic Sam, Etta James, Beyonce, Ruth Brown, Muddy Waters and others, hits new and very fresher arrangements. The band members are well-known blues and roots music professionals who have played in several domestic top configurations, but also with international stars. The band's sound combines with solid experience in a pleasant way, as well as the young-mindedness. Helge spent time with George Smith and William Clarke in L.A. at 1982 for three weeks. Both inspired him to start playing both diatonic and chromatic harmonica for real. Helge inspirited from this trip to release the album "Helge Tallqvist & Groovy Eyes plays George Harmonica Smith". Helge has also recordings with: Gyan Dookie & Telecaster Combo, Deep Blue Divers, Ilkka Rantamäki, The Hangovers, Marilin Marilin, Vieras kaupunki and Jukka Gustavson, a tribute to Finnish jazz musician Erik Lindström. The band preparing for a second CD with originals.

Well, I think I can hear in my playing differences depending on how life is overall. Anger, joy, and sadness. So for me, I’m happy to have my instrument that helps me to express/come out with my feelings, specially the sad ones. So perhaps I’m not too good to express my feelings otherwise, with my instrument I think I can. Since the so called British blues boom in the late 60’s blues has been very important to me. Found the original blues and the music has brought me so much satisfaction. Especially when started to play myself. And it is even more important for me nowadays when I’m older.

How do you describe Helge Tallqvist sound and songbook? What characterize your music philosophy?

Hmm, think I have a pretty big tone, so they say. Became even bigger when changed from pucker to tongue blocking single notes. Think I’m looking more for good tone and sound then a lot of notes. Right notes and good tone on the right place. Like George Smith with the chromatic. Great taste of putting nice notes on specific places. I like also James Cotton a lot. He is taking everything out of one note. So perhaps my philosophy, less notes, better sound on each note. I have no need to try to create something new. I just want my instrument to sound good wherever I am or with what mic or amp I’m playing. "Since the so called British blues boom in the late 60’s blues has been very important to me. Found the original blues and the music has brought me so much satisfaction." (Photo by Pertti Nurmi)

Hard to say, there are periods when blues is more popular and periods when less. But the music never disappears. As long as there are musicians playing the blues. People want to listen to this music live. It is also good dance music. And it is worldwide. If you think global, blues is a big music genre’. Jazz as well.

Certainly when I met George Harmonica Smith in Stockholm and LA. he took me and my friends around blues clubs in LA. We made friends also with Bill Clarke, Rod Piazza, Mark Hummel, Mike Watson, well we meet all those great West Coast musicians. After that trip I decided to start to play harmonica for real. Don’t know the best advice but Rod Piazza told me that when he had periods with day job, he tried to keep up what he had learned and when not working then improving his playing. Hm, I have always had a day job in an advertising agency, so businessman daytime and bluesman nighttime.

At the moment I’m finishing my new cd based a lot on George Smith and playing mostly the chromatic harmonica. I had a chance to play in studio with the Scandinavian musicians Tomi Leino, Jonne Kulluvaara, Mikko Peltola and Lars Näslund from Sweden. Everything felt so comfortable and easy so we pushed the record button and the result is a cd from that session.

About a live show, a week ago me and my vocalist young Ina Forsman went to listen to the young Swedish girl Lisa Lystam. She called us up to the bandstand and we had so fun. Ina sang I’m A Man and Lisa I’m A Woman. Great show by those two young blues stars. They have same kind of story behind. Found the blues recently and now they are already stars in Scandinavia at least. 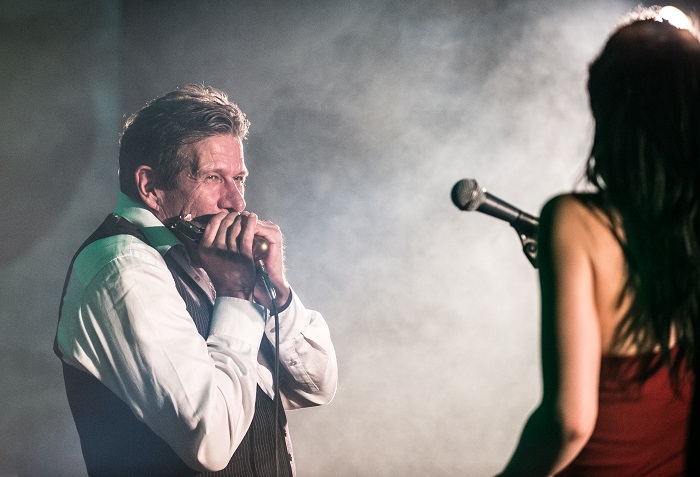 "To get the instrument sound well there have to be a lot of feeling in the playing. That is what blues is all about. Perhaps the instrument came into the blues because it was a cheap instrument and easy to carry with you." (Photo by Frank Nielsen)

I had a chance to hear Albert King, Muddy Waters, B.B King, John Lee Hooker and all those big names live in Helsinki. Today there are no such big names alive anymore and no new ones. So you don’t hear real good blues live anymore. Hopefully young people like Ina Forsman and Lisa Lystam will keep the blues alive and bring the younger generation to the blues shows. Otherwise this music will be even a smaller genre’ than now.

I think blues music would have a much bigger audience if this music would get more air time in radio and television. Younger people just don’t find this music. For Ina this music was quite “new” music when I contacted her after her Idols Finland competition. Now all her friends are also blues lovers. I do not know anybody who hates the blues. Still it is hard to come into a National tv show for example.

Of course the biggest blues boom in Finland was “The British Blues boom” in the late 60’s. As all over the world. Very important period for the blues cause the original blues was found cause of the British blues. Another big period was in early 80’s. There was a big Rockabilly boom in Finland and the blues became also popular cause of Rockabilly. A lot of big blues names had concerts here. Also lot of blues clubs in Helsinki at that time. 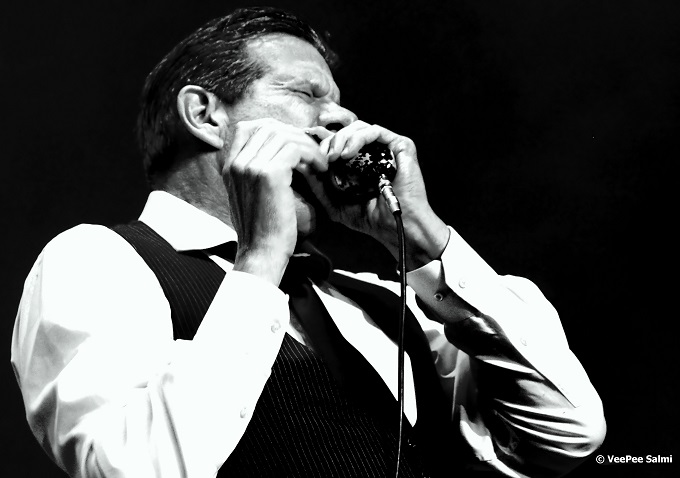 "Today there are no such big names alive anymore and no new ones. So you don’t hear real good blues live anymore." (Photo by VeePee Salmi)

What are the lines that connect the legacy of Blues & Jazz from United States and UK to Scandinavia?

Of some reason the real blues from the States has always been popular in Scandinavia. That is why bands from US want to come to Scandinavia, especially Finland and Sweden. We have a lot of blues festivals in Finland, almost every city has their own. Every week-end a festival somewhere in Finland. Finnish and Swedish bands also play the blues from the States, not UK. Think in Europe the British rock blues is more popular. Nobody can tell why so. Why Scandinavia differs from other parts of Europe. Mentality of people, long dark and cold winter? Hard to say.

Hm, the sound of the harmonica is filled with emotion. It is crying, wailing but can be “happy” as well. To get the instrument sound well there have to be a lot of feeling in the playing. That is what blues is all about. Perhaps the instrument came into the blues because it was a cheap instrument and easy to carry with you.

Think either into the Chess studio in the early 50’s to Little Walters recording sessions. There the Chicago harmonica sound was born. Could also spend a day/night in blues clubs in Chicago in the 50’s. To see Muddy Waters with Little Walter on stage would be something. 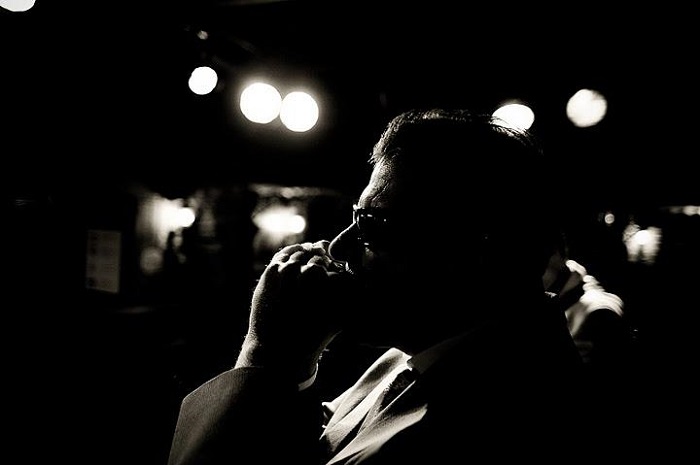