"Music truly does have magical powers to unite, inspire, calm, heal and uplift peoples of vastly different backgrounds and it is very gratifying to see my own music reaching such a wide and diverse audience."

Greek descent, Paul Avgerinos is a Grammy winning artist, composer and producer whose music is broadcast all over the world. When Paul Avgerinos graduated from the Peabody Conservatory of Music in 1980, as a full scholarship honors student, he had already performed as a bassist with Isaac Stern, Jean Pierre Rampal, The Beaux Arts Trio, Baryshnikov and many other great classical artists. He also has won scholarships to play and study at music festivals in Tanglewood, Aspen, Grand Teton, Taos, and Spoleto (Italy). After graduation, Paul served as principal bass of several major symphony orchestras around the world, and gave solo recitals as well. 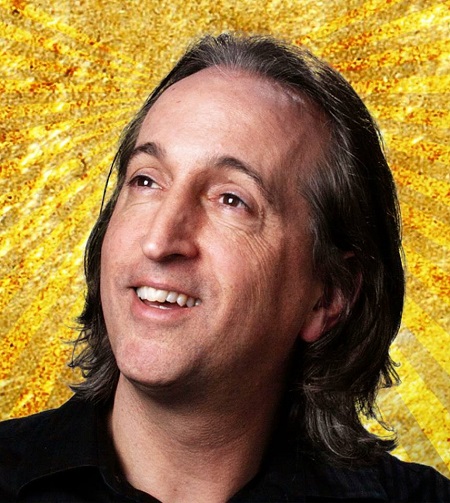 Expanding into more popular genres, Avgerinos toured as a bassist with Charles Aznavour, Liza Minelli, and the jazz legend Buddy Rich. Seeking to further his original composition and develop his childhood passion for electronic music, Paul built Studio Unicorn, a comprehensive digital/analog recording studio, in 1984. Nine solo CDs in the New Age genre followed, including Muse of the Round Sky on the Hearts of Space label. Muse won many awards and is played on more than 2,000 radio stations around the world in addition to syndicated shows such as Music from the Hearts of Space and John Diliberto's Echoes. He has appeared on fourteen sampler CDs and as a guest artist on albums by Joanie Madden, Faruk Tekbilek, Joaquin Lievano, Brian Keane and others. Paul records and produces many popular albums as well and has worked with artists as diverse as Jewel, Willie Nelson, Deana Carter, Richie Havens, Run DMC, and the Celtic Tenors. Avgerinos always makes time for scoring and has worked on many Film, Commercial, TV, and Cable projects for all of the major and minor networks. Keeping busy creating original music for a variety of interesting and rewarding projects is a way of life. 2016 Grammy winner album GRACE was Avgerinos’ 22nd album since 1985. Currently, Paul lives and works in his Studio Unicorn, Redding, Connecticut, where the deer pass by his studio windows and the hawks and eagles give inspiration from above.

What do you learn about yourself from the World Fusion Music? What characterize your music philosophy?

I have learned many things about my spiritual, emotional, mental and physical nature from music, as we learn so deeply about our true nature in the study of music and in the pursuit of excellence in this fine art. I believe that music is a path to spiritual growth and enlightenment as we refine and discipline our wild nature to the precision of the queen of the arts.

What were the reasons that you started the world music researches and New Age experiments?               (Photo by Mike Windle) 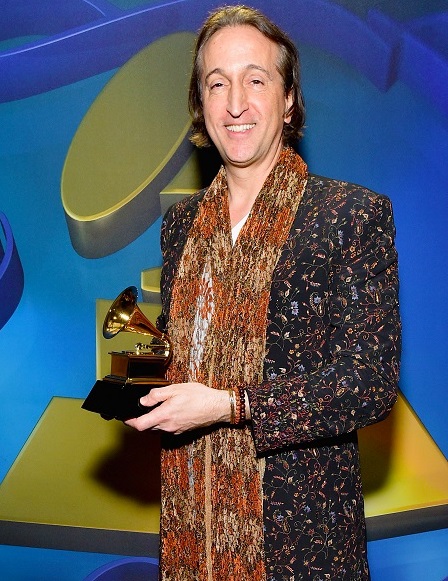 I remember that day forty years ago as clearly as this very moment. Saddened and disheartened by my parent's divorce, I sat alone in our darkened porch with my eyes closed, drawing a horse hair bow sticky with tree rosin across the string of a bass violin, my cheekbone pressed against the neck of the instrument so that the deep resonant vibrations poured directly into my skull, my whole being vibrating with the majestic powerful perfection of sound. I had just clearly heard the voice of God in one simple pure note. I had just discovered the power of music to heal, bless, forgive and lead us to love, our true and highest nature. That 13 year old boy did not know then that a lifetime career in music lay ahead but he was very sure that he had discovered something deep, profound and very significant. Pure sound vibrations directly change your mood, thoughts and feelings, and if you listen with perfect one pointed attention, music will HEAL you. Of course, we actually heal ourselves through the magical power of God, our souls and bodies, but music guides us to ALLOW it to happen. Music is perfectly balanced, complete, harmonious and whole. When we are one with music, we ARE love in perfect harmony with the universe and all sentient beings. When we ARE love, perceived hurts and pains drop away as there is really nothing to forgive since we are complete and whole in the perfection of our divine nature. We look upon all of life's stories and circumstances with complete compassion and acceptance, especially our very own life stories and circumstances. So that innocent 13 year old boy made his way out into the world. A full scholarship to a prestigious conservatory, a devastating heartbreak. World tours, Carnegie hall, terrible loneliness and depression. Critical acclaim and career success, lost loves, more heartbreak and eventually the death of his dear parents…
Through it all, music steadily draws me to BE LOVE, Peace, Joy, Bliss, Wisdom and Grace. In fact, as my life difficulties increased, my music became more purely love. Music, my constant guiding light and beacon of hope, never failing, always true, ever faithful as God is. And so dear friends, listen deeply and listen well. You too will hear the voice of God speaking directly to your heart and soul. Healing, forgiving, blessing you in all ways … I learned that life is like a wheel going round and round. Sometimes you are up and sometimes you are down. Don't get attached to the temporary circumstances of physical existence. They are fleeting and ever changing. Hold fast to the center, the heart of God which is perfect Love. It will never fail you!

My musical colleagues have been part of my most important experiences as well as my solitary spiritual experiences. The great producer Brian Keane once told me - “Before you start an album project, ask and answer these three questions - 1) Who is going to be listening to this album? 2) What are they going to be doing while they are listening? 3) How is this music going to help and serve them? Brilliant and very important advice to live by in the music business! 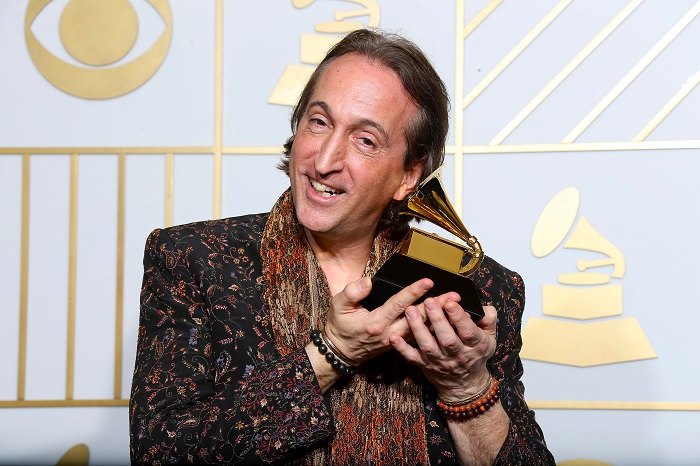 "I have learned many things about my spiritual, emotional, mental and physical nature from music, as we learn so deeply about our true nature in the study of music and in the pursuit of excellence in this fine art. I believe that music is a path to spiritual growth and enlightenment as we refine and discipline our wild nature to the precision of the queen of the arts." (Photo by Frederick M. Brown)

About 20 years ago I was engineering a Rock session in my studio when one of the musicians slipped and poured soda into my very expensive patch bay. Then there was a very animated fight and a few minutes later, flames shot out of one of the machine rooms. I put out the fire and shut everything down. Calmly, I turned to the band and said, “Well, I think we have done enough work for one day, let’s try again tomorrow'”.

I miss the incredible level of skill amongst the singers and musicians. No Autotune, Pro Tools, precision surgical editing of every imperfection. I hope that the young people keep studying hard to maintain true excellence in the musical arts.

I would ban and remove all illegal downloads and stealing of music from us hard working music creators and see cooperation from all the parties involved to stop piracy and copyright violations once and for all.

What are the lines that connect the legacy of World music with ambient, space, fusion, electronic and jazz music? 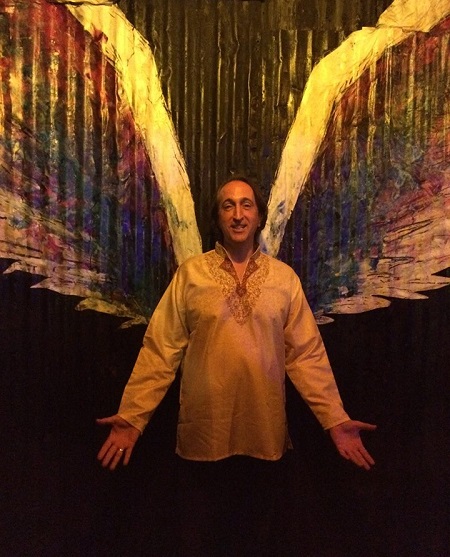 Being a truly universal vibrational art form, music is beyond the confines of words and genres and is constantly re-combining its DNA just as life does, always giving birth to new and fascinating genres and styles, blurring and ultimately erasing all lines of separation.

"My musical colleagues have been part of my most important experiences as well as my solitary spiritual experiences."

What has made you laugh from the road with Charles Aznavour, Liza Minelli, and the jazz legend Buddy Rich?

On one Aznavour tour, the band went ahead to Santa Barbara from LA to get ready for the evening’s show.

We were all ready for Charles but it was getting later and later with no star singer in sight! Finally, about 45 minutes late, the doors flew open and in comes a very agitated Charles and his manager, Levon saying, “I TOLD YOU, ZEE OCEAN WUZ ON ZEE WRONG SIDE OF ZEE CAR!!!'” They had drive South instead of North and gone halfway to Mexico before they realized their error! Too funny!!!

What is the impact of music to the socio-cultural implications? What touched (emotionally) you from Greek music?

Music truly does have magical powers to unite, inspire, calm, heal and uplift peoples of vastly different backgrounds and it is very gratifying to see my own music reaching such a wide and diverse audience.

Let’s travel back to the most glorious days of Greece and hear Homer recite the Odyssey to a fine and sublime musical accompaniment! 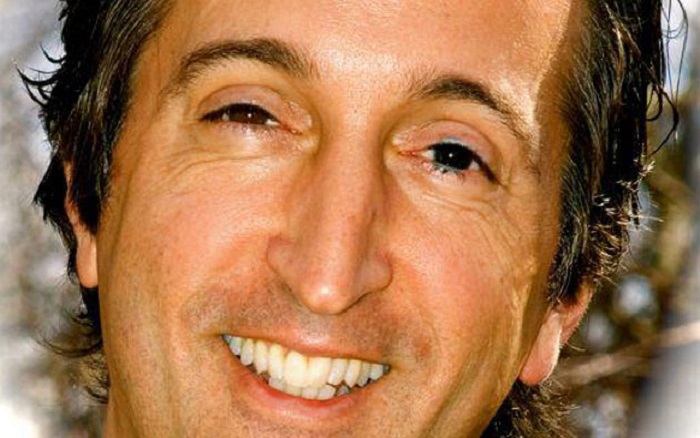