"Samoa and Hawaii both have an open tuning style of guitar picking that translates perfectly into the blues. Each has different tunings depending on what region they are from, not unlike the blues. But I feel that the biggest similarities are the stories we tell."

Taumei “Big John” Akapo is a presence in Hawaii, not just in his physical stature, but in the commanding nature of his soulful blues voice and ringing guitar playing that have enthralled residents and visitors to the Islands for decades. With the release of his debut CD, Paradise Blues, on October 19 from Mensch House Records, listeners from around the globe will get to experience what all the excitement is about. Paradise Blues showcases John Akapo at his very best, with 10 songs that mix both his love of Delta blues and his American Samoan DNA for a blend unlike any other performer in contemporary blues/roots music. Produced by Akapo, the 10 tracks on his new disc include seven originals, as well as his own unique take on songs from some of his mentors, such as Robert Johnson “Ramblin’ on My Mind”, Muddy Waters “I Can’t Be Satisfied” and Tommy Johnson “Big Road Blues”. John Akapo is a nomad who followed the music: from his early days as a kid growing up in Alaska, where he fell in love with the guitar, to his youth spent in American Samoa singing acapella and learning how to loop, John has been magnetically connected to a path of musical discovery. John's family heritage runs deep into the music. As a kid, John was constantly surrounded by music and his uncles were touring musicians who played guitar. His parents had watched family members succumb to addiction from the rock-and-roll lifestyle, so they did their best to keep John and his brothers away from the same pitfalls. 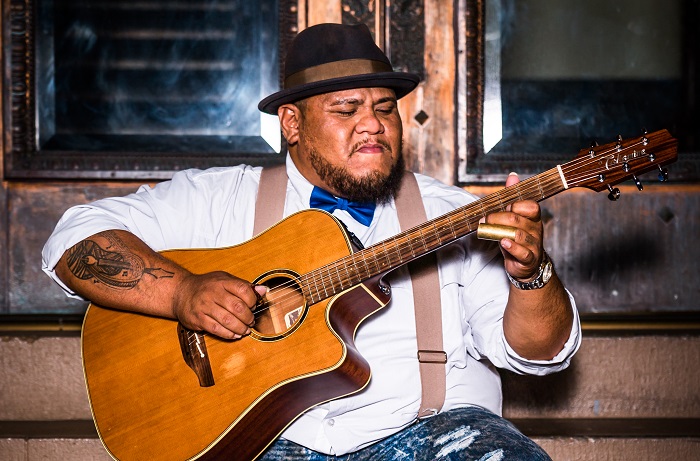 John immersed himself into the origins of the blues and never looked back. Taking a cue from the legends like Robert Johnson, Tommy Johnson, Blind Lemon Jefferson, Son House, Willie Dixon, Muddy Waters, Howlin’ Wolf, Buddy Guy, and B.B. King, he began to explore and absorb as much as he could from recordings, movies, books and magazines. Blues had become his solace. Recording his own original works, John began a professional career as a luau musician, bandleader, solo entertainer, and more recently, a hip-hop producer and vocalist for 13 years. When he sits down to write music, he always ends up with a blues song. It's only fitting that he has finally decided to release his first album, Paradise Blues, as a blues artist bringing him right back home. Akapo's eclectic style has won over fans across the globe, including the likes of comedians J. Anthony Brown and Russell Peters, who sang John's praises on his Instagram feed. On his musical journey, John Akapo never turned his back on his Samoan heritage or his Hawaiian roots, and his experiences on the Islands have helped shape him as a person, as well as a guitarist. John embodies the spirit, beauty, sadness, and struggle of the Islands with every guitar lick.

How has the Blues and Polynesian music influenced your views of the world and the journeys you’ve taken?

For me, the blues shared a story of hardships with the hope that they could be overcome. I come from a proud bloodline of Polynesians who have overcome much to be accepted in a foreign land (America). The music of my ancestors was a way to perpetuate our culture and to give a historical account to the generations to come. The blues and Polynesian music together have opened my mind to find a way that they are connected, and that has given me a broader perspective on all people and the stories we have to share.

How do you describe “Big John” Akapo sound and songbook? What characterize your music philosophy?

My sound is simple. I try to sing and play in a way that complements the lyric instead of competing with it. The fact that I may seem so far removed from “the blues" geographically and also historically, I feel gives me an advantage to share another perspective of the islands that I represent. 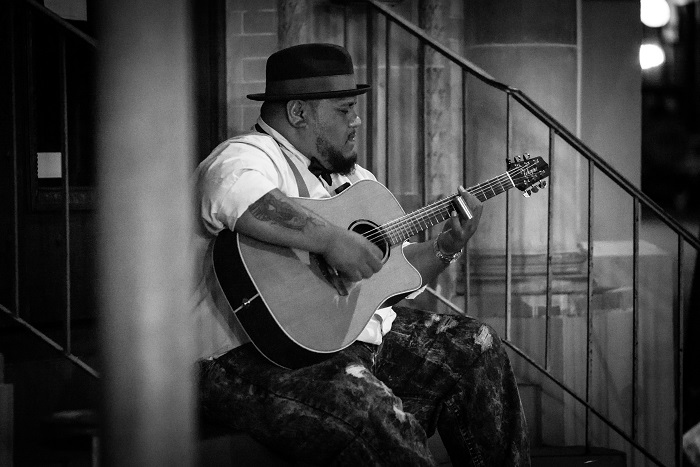 “My parents were firmly against the idea of me taking up the guitar, I would have to hide my interest in singing and especially playing the guitar. I looked to my brother's friend for guitar lessons and quietly dove into a wormhole of music that I have never climbed back out of. I would learn to play songs from watching VHS tapes or whatever I could get my hands on. That was how I discovered Eric Clapton performing his MTV Unplugged set and my whole world changed. I was still too young to have known who he was or that he was even part of the British revival of the Blues. All I knew was I wanted more.”

When I was finally old enough to have real conversations with my uncle, Faamau Liu (my biggest guitar influence), I was able to really learn what playing music was about. He taught me to not be so reckless with my playing, but to put thought and meaning behind it. He opened my eyes and exposed how bad of a musician I really was! Haha!

I don’t feel like anything is missing. Great music is still out there, and is even easier to find these days!

The musical world is already changing so fast. It’s the “real world” that I’m worried about.

Make an account of the case of the blues in Hawaii. What touched (emotionally) you from the local music circuits?

Artists like Willie K and Lightening Larry Dupio have been the driving force behind Blues in Hawaii. Both are world class musicians and continue to prove that the Blues is alive here in the islands. I watched Willie K play a slow blues tune at a Whale Day celebration years ago… it literally changed my life. 88° In Kihei, Hawaii at 3pm and thousands of islanders and tourists alike were on their feet screaming for the blues! What a special moment. I still get chicken skin when I think about it. “I think my music is like a tree rooted in traditional blues but sprinkled with Pacific salt water,” John explains. “I’m merely telling a story of where I’m from, and how I got here, set to a mellow acoustic blues soundtrack. I play the blues because it feels familiar to me. I feel a connection to the story behind the blues and I’m just trying to continue the story from another perspective. Give me a try and see if I can’t make you feel good about being blue.”

Samoa and Hawaii both have an open tuning style of guitar picking that translates perfectly into the blues. Each has different tunings depending on what region they are from, not unlike the blues. But I feel that the biggest similarities are the stories we tell.

The Blues was born from a racial and political divide. Is that not what America is going through at this very moment?

I have learned to keep my heritage close to my heart. My ancestors were voyagers. They traveled on an ocean that connects us all, not separates us and it’s that connection that has brought me to the Blues.

Oh man that’s tough… ok. I’d like to watch Muddy Waters and his amazing band perform at the Newport Jazz Festival in 1960 so I could see how it’s supposed to be done. 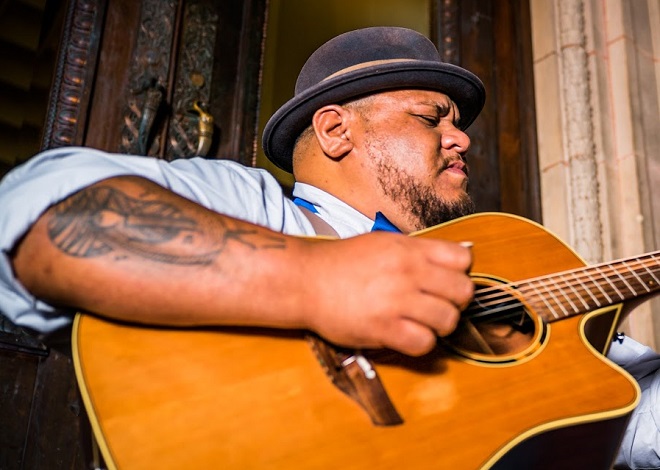 “The blues fans that have seen me play, appreciate the fact that I’m from Hawaii, yet I make them feel like they’re at home in the mainland,” he summarizes. “The blues is at home here in the Islands, and it’s nothing new. I think the entire blues scene could use some of this Paradise Blues.”