"In the earliest days blues was a form of communication and outlet for a group of people who were put at a serious disadvantage by society, and one thing that makes me very sad that not much has changed for the ancestors of those early African-American blues performers."

Jay Moonah (Broke Fuse) has been active on the Canadian music scene for more than 30 years and is a former member of a number of bands including indie-roots-rockers Uncle Seth and retro-folk act The McFlies. Jay is also co-founder of the Scarborough Uke Jam. While probably best known on the Toronto blues scene as a harmonica specialist, Jay plays a number of different instruments and is also a singer and songwriter. One man. A suitcase kick-drum. A box of harmonicas. A beat-up guitar. Also a mini-washboard, and a bit of kazoo for good measure. Broke Fuse is a one-man blues band from Toronto, playing original songs along with classic blues. Broke Fuse has performed throughout Southern Ontario, including opening slots for acclaimed artists such as Suzie Vinnick, Tim Williams, Al Lerman and Greg Godovitz, as well as a showcase at the TD Toronto Jazz Festival.                                           (Photo: Jay Moonah aka Broke Fuse) 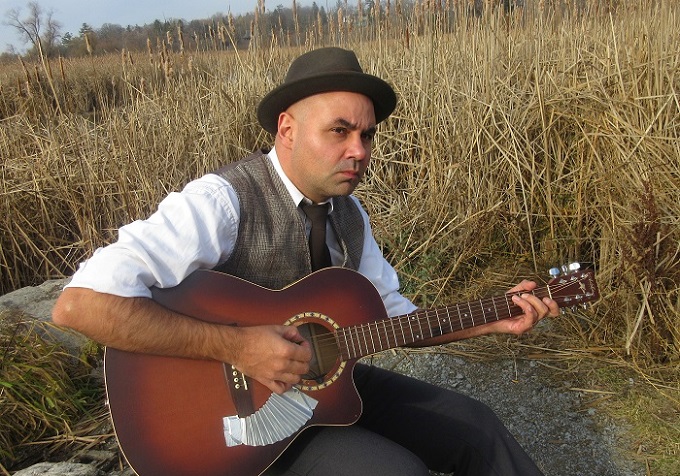 The all-original debut EP The Underground was released in 2015, with the follow-up Broke Down + Blue arriving in early 2017.  "Subway Blues", the lead single from The Underground was featured on Global News Toronto. He has been active in the Canadian music scene for more than 25 years, and is a former member of indie-roots-rockers Uncle Seth and retro-folk act The McFlies. Jay is also co-founder of the Scarborough Uke Jam. In 2017, Jay teamed up with legendary guitarist Mike McKenna (Luke & The Apostles, McKenna Mendelson Mainline) to form McKenna Moonah Blues Duo. Mike and Jay later formed the rockabilly band Mike McKenna's Rockin' Redcoats which also features bassist Mark Sinclair (Up All Night) and drummer Cleave Anderson (Battered Wives, Blue Rodeo). Canadian Blues & Roots artist will be released on June 25th, 2020 his new album titled "Why Should I Be Blue?". Featuring remote contributions from Mike McKenna, Sandra Bouza, Alex Matthew, Frank Baraczka, Attila Baraczka, Paul Butters, Matthew Bartram, Steve McNie, Alex Cheung and Frank Horvat.

Blues for me is kind of essential, it’s like the ground. I do play other kinds of music, but It’s all really rooted in blues ideas, blues scales, blues chords, at least for me.

Broke Fuse was something I started as a way for me to focus on “pure” blues (or at least my version of it.) That included songs that I have written as well as songs from great classic blues artists that I love such as Willie Dixon and Jimmy Reed.  I’m not sure where my “drive” to play music comes from exactly, but I know it’s something that’s essential for me. There have been times where I haven’t been playing in bands or doing gigs, but I always quickly found myself back to doing something musical. I’m really just compelled to do it, I get uncomfortable if I’m not able to play music for too long. 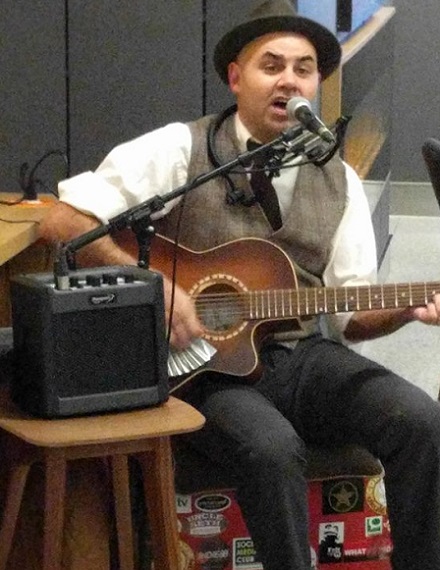 There are many but I’ll single out the first night I played with Mike McKenna. I was slotted to open for Al Lerman as part of the “Dinner and a Song” series at the Olde Stone Cottage, which is my local pub in Scarborough.  The main concert was a ticketed sit-down show in the upstairs Loft and then there was an afterparty taking place in the main floor bar area. I was asked to play the afterparty as well, but it was recommended that I get someone else to fill out the sound beyond my usual one-man band thing. My friend John Johnson, who is one of the Dinner and a Song organizers, suggested Mike McKenna, who is also a friend of his. I was actually surprised at the idea that a Canadian blues legend like Mike would be interested in playing with little ole me, but he turned out to be a lovely and unpretentious guy, as well as a killer guitar player of course!  We struck up a great friendship and musical partnership, and I’m thrilled to have him on a couple of songs on this new record. Oh, and Al Lerman came down and sat in with us for most of the second set, so that was also a huge thrill as Al has been one of my role models for many years.

I guess the biggest thing I miss is that many of the greatest blues musicians are no longer with us. Obviously some of the older generation such as B.B. King and Muddy Waters are no longer around, but also relatively young guys who I grew up listening to like Stevie Ray Vaughan and Jeff Healey were taken from us way too soon. But I’m optimistic about the future of the blues in general. For a long time now blues has been a “niche” genre like jazz or classical, which honestly I think is a positive thing because it’s become more timeless in a way. I sincerely believe people will be listening to Willie Dixon songs 300 years from now the same way we listen to Beethoven today. I also think there's tremendous opportunity for newer performers like me and my friends to put our own spin on things and keep them moving forward.

What would you say characterizes Toronto blues scene? What touched (emotionally) you from the local blues circuits?

It’s a great question because the first song on the new record called “Blow All The Blues Away” is specifically about how much it means to play at a blues jam!  I’ve had so many good times and met so many amazing people on the Toronto blues scene. I’ll single out a few including Mike Sedgewick and Robin Hutchison who run the Friday Night Blues jam, most recently taking place at the Salty Dog.  Mike and Robin are such sweet and talented folks, and have built such a great community around their jam. We had a Zoom call with a few of the regulars from that jam not long ago, and although we couldn’t play music in that format it was great just to see everyone and just talk.  And also the jams at the Black Swan centred around McKenna and his band have been tremendous for me, both in terms of a fun and learning perspective. I have to give a shout out to the late Pete Otis who was so instrumental in putting that whole scene together, he booked Mike’s Sunday afternoon shows at the Swan along with so many others. Pete sadly died of a heart attack that he suffered on New Years 2018-19 at the Swan. Pete was super-supportive of me, he made sure I received billing and had my picture on the poster for those gigs even though I was really just one guest among many. He is dearly missed by so many of us on the scene. 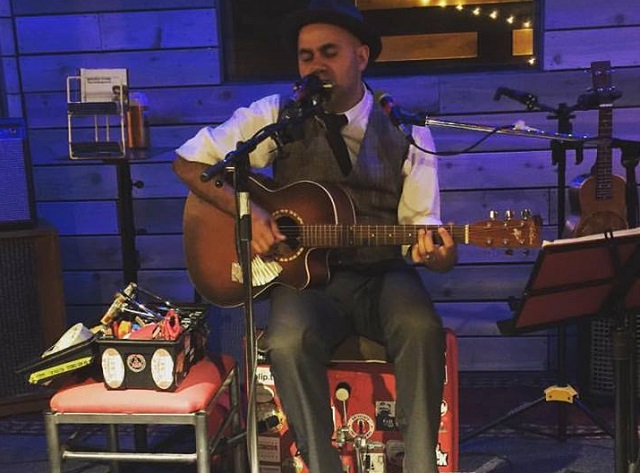 "Blues for me is kind of essential, it’s like the ground. I do play other kinds of music, but It’s all really rooted in blues ideas, blues scales, blues chords, at least for me." (Photo: Jay Moonah aka Broke Fuse)

One key lesson I take away from music is simply around hard work and practice to help achieve your goals. I’m by no means the most disciplined musician out there, but I have spent my share of time woodshedding parts and techniques. I know that’s made me a better musician, and I try to do that in other aspects of my life. Another lesson is around tolerance and acceptance – I think I’m a pretty tolerant guy in general but playing lots of different kinds of music with and for lots of different kinds of people has really helped broaden my perspective.

What were the reasons that you started the One-Man Band experiments? What is the hardest part of One-Man Band?

In 2014 I had a little song-writing spurt where I came up with a few blues songs. I've done a lot of 'blues-y' stuff over the years, but I wanted to do something a little more focused on the blues where I could feature these songs and where I could play more harmonica, which I really love doing. At first I was thinking about putting together a full band, and "Broke Fuse" was just a name I came up with. I got interested in the idea of a one-man band thing after hearing some different people online doing similar stuff and thinking "that might be fun." With this new record I was actually trying to steer Broke Fuse in a more band-oriented direction, but I still love doing the one-man band thing and I’ll definitely continue to do that as well.

What is the impact of Blues and Roots music on the socio-cultural implications? How do you want it to affect people?

In the earliest days blues was a form of communication and outlet for a group of people who were put at a serious disadvantage by society, and one thing that makes me very sad that not much has changed for the ancestors of those early African-American blues performers. Today those folks probably would have performed hip-hop or something more in the zeitgeist, so blues has evolved to be something perhaps a little more anodyne in that respect, but I think from an emotional point of view the blues is still very powerful. Wow that’s tough! I’m sure if you asked me tomorrow I’d have a totally different answer, but the one that jumps to mind right now is the 1969 Rolling Stones show at Hyde Park, I think because I was reading something about the Stones recently. This was the first time they played live with Mick Taylor which would have been so cool to see. Also almost more than the Stones, I would have loved to see the original line-up of the opening act King Crimson, who are definitely not a blues band but still one of my all-time favourites. They were just outrageously good musicians. Also Alexis Korner was on that bill, along with John Mayall he was so essential to kickstarting the British blues scene, and without him I don’t think we’d be thinking about blues the same way, so it would have been really interesting to see him perform as well. And come to think of it I'm pretty sure Mike McKenna was living in London at that time, so maybe I could have tracked him down and checked out an early McKenna Mendelson Mainline gig later that night. And then I'd explain to him how we are gonna play together 50 years in the future... that would have really blown his mind, haha!