For me “Blues” is about the human life experience set to music. In that sense, all musicians who play from the heart and soul are playing "the blues."

Jim Roberts and The Resonants have arrived on the musical scene. Their sound is firmly routed in the deep south and midwest where Americana / Roots, Rock and Blues punctuated by slide guitar define the landscape. The music has strong southern themes that tell a story and Roberts Slide Guitar work adds fire and finesse to the mix. Roberts also writes and performs on 3-string Cigar Box Guitar, which at times gives the music a primitive and haunting sound. His previous work can be heard on the 2014 CD release: Devil on a Dirt Road by The Jack Roberts Harvey Band. He plays guitar and slide, sings lead vocals, and wrote most of the music and lyrics. He now brings that sound to a new band: Jim Roberts and The Resonants. 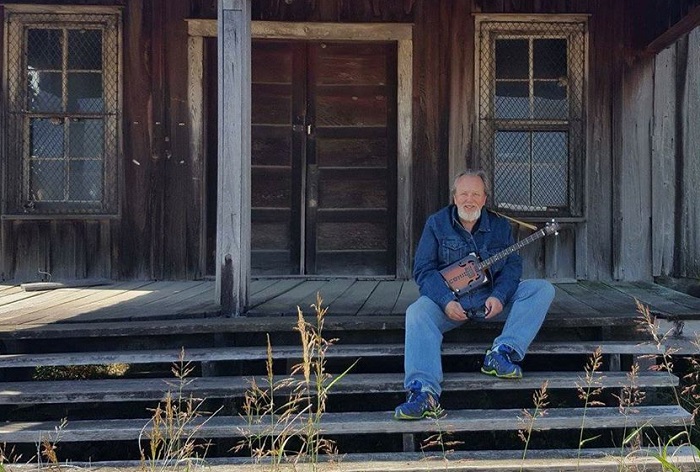 Jim Roberts and The Resonants, formerly known as the Jack Roberts Harvey Band, they now bring that familiar southern rock sound back to listeners, but this time with a different name. With down to earth songwriting, vocals and slide work laid over a solid rhythm section, Jim Roberts and The Resonants bring you further on down that Blues/Roots highway on a new adventure. Their new cd "Beneath The Blood Moon" released on May 2017. It features ten all original songs with special guests joining us on several tracks. Most notably, Mike Finnigan (Phantom Blues Band/Bonnie Raitt) and some of Band’s Los Angeles musician. This album has been a real labor of love with quite a bit of sweat thrown in for good measure.

When I started playing guitar as a teenager, it was mostly about learning licks from cool blues/rock guitar players and wanting to play like them. I had little understanding of where the blues came from or what it actually meant…just a lot of adrenaline. I had no sense of any history then. I am much older now and have had my share of life experiences, from the joyous to the tragic. For me “Blues” is about the human life experience set to music. In that sense, all musicians who play from the heart and soul are playing "the blues."

How do you describe Jim Roberts & The Resonants sound and songbook? What characterize your music philosophy?

Although I was born in Chicago and raised in the Midwest, I have always had the greatest respect for music that came from the South. I believe in telling a story when I write a song and the South is filled with stories that speak to me. In Jim Roberts and The Resonants “beneath The Blood Moon” CD I have tried to capture that Southern Rock/Blues sound that was popular in the 1970’s. I hope that it will “Resonate” with listeners!

Playing the blues has allowed me to connect with music lovers all over the world. I am currently in France promoting the new CD. Music is indeed the universal language. 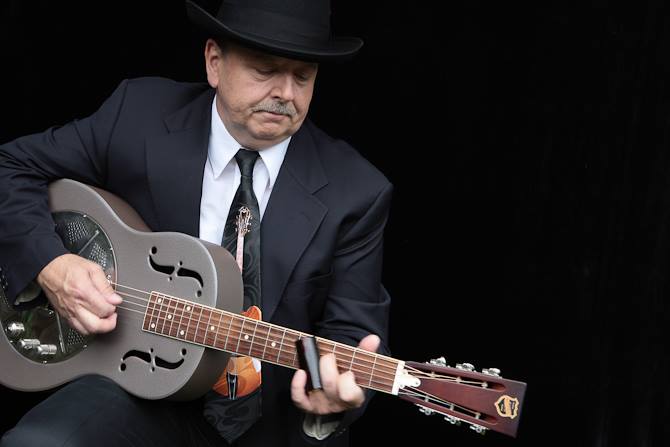 "When I started playing guitar as a teenager, it was mostly about learning licks from cool blues/rock guitar players and wanting to play like them. I had little understanding of where the blues came from or what it actually meant…just a lot of adrenaline. I had no sense of any history then. I am much older now and have had my share of life experiences, from the joyous to the tragic."

Well I would have to say that my father had the greatest influence on me becoming a musician. He had been a professional accordion player in Chicago back in the 30’s and 40’s. When I was growing up, he was always playing music and singing around the house. He would entertain folks who came over to visit and was always the life of the party. My mom also sang (although not professionally,) so I grew up surrounded by lots of music.

However, my Dad was a child of The Depression and he wanted me to have a better life. So when I saw the Beatles as a teenager on The Ed Sullivan Show, I (like so many other red blooded teenagers) wanted to play the guitar. I don’t think my Dad really wanted me to pursue a music career. He knew how tough it was to be on that road. He tried to get me to pursue other possibilities over the years. As the saying goes: Don’t quit your day job!"

I fell off the back of the stage once, but let’s not go there!

Everything is a snapshot in time. I love listening to the old blues records. When Charley Patton, Son House, Muddy Waters, etc were learning their chops and playing in the South, they were taking the music they had heard from other musicians and recreating it...making it their own. The same is happening today. However, we must be careful. We need to step back from technology and get back to playing music made by people, not machines.

I am an optimist by nature. If creative real musicians keep making music from their heart and soul, and that emotion is conveyed over whatever the latest technology is, then I think we will be OK. I miss browsing in Record and CD stores. Boy, I could spend hours there...Bring back Tower Records!

"Music is indeed the universal language."

What are the lines that connect the legacy of Southern Music from Blues, Soul and Rock Jam to Country and Folk?

It was the marriage of Black African music and European music brought together over time...played by countless musicians and passed on generation to generation that has brought us to where we are now. It’s all connected. I believe too much emphasis is placed on categorizing and labeling everything. Good music is just good music and I like it all. Musicians bring their individual personalities and creativity into the mix and that gives us the diversity in music that we label: folk, rock, blues, etc.

What touched (emotionally) you from the Resophonic and box-guitar sound? What are the secrets of slide?

The sound of glass (or metal) over steel strings has a vocal quality that I just love. Vibrato and pitch can be manipulated to sound more like the human voice. The resonator guitar has a sweet hollow sound that I really like and of course slide on the electric guitar can scream at you. The 3-string Cigar Box Guitar I play slide on is a primitive instrument. Simple in construction, but possessing a haunting sound that captures the imagination. As far as the secrets of slide…damping is very important. Damping is when you drag your index and middle fingers of your slide hand over the strings behind the slide. That helps to minimize overtones and makes what you play sound cleaner. Of course, pitch and vibrato are ever important and it takes time to get your notes sounding clean and accurate. Most people pick up a slide, run it across the strings a few times and give up. It takes a long time to develop good slide technique. Don’t give up!

What is the impact of Blues and Rock n’ Roll music on the racial, political and socio-cultural implications?

Wow…that sounds like politics! I don’t try to influence anyone to think like me….too many arguments and disagreements these days. I’m gonna stay away from that one!

Musically...How about the Allman Bros at the Fillmore East when Duane was tearer it up on slide or Muddy Waters in his prime in Chicago. I could definitely spend a whole day there. Tell "Doctor Who" to drop by and pick me up!

Jim Roberts and The Resonants - Home