Q&A with Leslie Bixler (aka Miss Bix), inspired by the home of the blues, the Crossroads in Clarksdale, MS

"Children are just trying to figure out how the world works, they are like little alien beings, completely innocent and excited and they are looking at everything through their eyes. This is kind of magical…"

Miss Bix: We Don’t Own The Blues

LESLIE BIXLER aka MISS BIX aka LESLIE LETVEN has been writing, recording and performing since her early twenties. Her first international record “Make It Right” was released on Syndrome Records under her maiden name Leslie Letven and did very well in the smooth jazz category, reaching #12 on the charts, and still receiving radio play today. At that time, she was collaborating with her talented husband Bill Bixler of the Wild Blue Band and nightclub. Moving back to LA, Leslie and Bill produced and self-released “Porcupine”. After the birth of her son, Leslie turned her attention to children’s music, spending several days a week doing music circles with preschool age children. It was there that she wrote and test-ran several children’s songs which attracted the attention of Dick Van Dyke and Chad Smith (Red Hot Chili Peppers), whose child was in her class. She produced two albums “Moon Food” with Dick Van Dyke and “Rhythm Train” with Van Dyke and Chad Smith. She toured with Dick and Chad promoting those albums and received notable press from many celebrities and publications and won a parent’s choice award.          (Photo by Suzy Demeter) 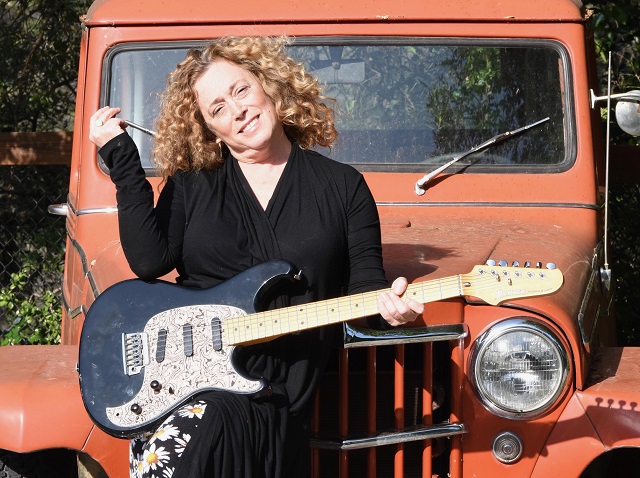 Once her son grew up, Leslie’s yearning for a new musical start led her to Clarksdale Mississippi where she fell seriously in love with the blues, something she had always gravitated towards. Working with co producer collaborator Ralph Carter (former Musical Director with Eddie Money and co-writer of his hit tune ‘Shakin’’) Leslie began writing “We Don’t Own The Blues,” a group of blues-based songs that reflect a new and exciting musical direction: passionate, intense, and sultry. Her new album ‘We Don’t Own The Blues’ (2019) is inspired by the home of the blues, the Crossroads in Clarksdale, Mississippi. Leslie Bixler (aka Miss Bix) spent several months there soaking in the culture and learning the blues from the founders themselves. This is a rare find, 12 songs that pack a punch, in a conceptual flow, reminiscent of days past, when albums told a story. Leslie Bixler and co-producer Ralph Carter (Eddie Money and Sugaray Rayford), who brings bass, percussion, guitar and keys to many of the songs, are joined by John ‘JT’ Thomas (Paul Hornsby), Gary Mallaber (Van Morrison, Steve Miller and more), blues guitarist extraordinaire Franck Goldwasser (aka Paris Slim), sax man Bill Bixler, and harp player RJ Mischo.

It makes me feel at home wherever I go. Blues for me, is a quality, not just a type of music. MY favorite music always seems to have a bluesy thread going through it, even in jazz, classical, rock, and pop. It has to do with a relaxed, laid-back feeling, an authenticity, and a kind of bending of notes to squeeze out all the different emotions that that note can evoke. It has to do with not rushing, staying on the back end of every beat, which makes me feel good, "in the pocket" so to speak. And on a certain level, most blues people tend to be MY people. There's suffering everywhere, but the blues is a healer.

I think I'm a story teller. Most of my songs have kind of a narrative arc, like a story. I try to inject myself into every word, every syllable. I strive for dynamics, only singing hard if there is a good reason to, not just because I'm a 'blues mama'. I love to belt but only sometimes. A whisper can be equally powerful. My creative drive comes from the desire to connect with others on a meaningful level, to be understood, to get to the heart of things. I hope to express things that people may not have the words for, and to elevate the experience of life with the power beyond words, when the words and the rhythm and the melody come together. 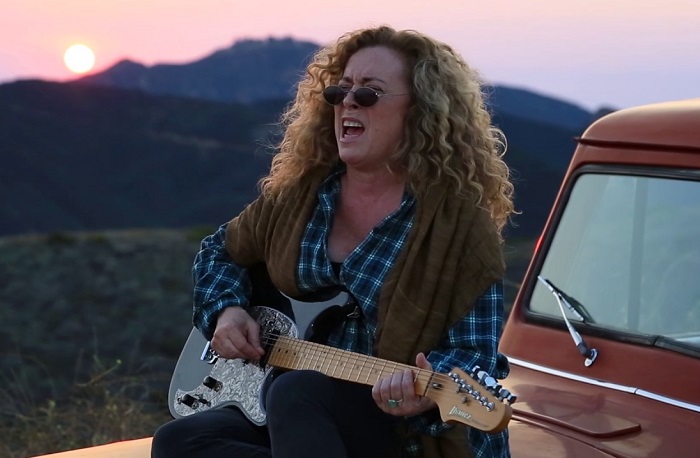 "Believe it or not, it is still a man's world in music, with some notable exceptions. I find it very hard to be taken seriously as the writer and producer of my own music." (Photo: Leslie Bixler aka Miss Bix)

Working with Chad Smith from the RHCP on my CD "Rhythm Train"…he told me there's no "FUN" button that you can add after the song has been recorded. The fun has to be IN the track from the start. We made sure never to overthink anything and to rely on our spontaneous instincts and that was very freeing. That was when the best music happened.

Another guitarist, Franck Goldwasser, told me that whatever I was doing that was uniquely mine, whether it be different tunings, or my own way of playing, I should celebrate it and deepen into it rather than try to be more 'normal'. That also was very freeing, because I have my own way of being in the world and it works better when I don't fight it.

I've done a few fun gigs with Dick Van Dyke, one where it was only me and another guitarist, and I was singing with him at a bookstore. I sort of had to lead the show and it was quite fun to be onstage trading jokes etc. with Dick Van Dyke and having him promote my CD and sing the song I wrote "I'm A Pirate"… I realized that I have to kind of own my own power as a writer and performer and not be intimidated.

Music of my early childhood, which I first heard through my older sisters in the sixties and seventies, was exploding with vibrancy and meaning. People really strived to say something in their songs, and their melodies, and they were coming from a more authentic place, and making a real difference in the state of the world. Rock music was coming straight out of blues at that point but it was turning toward issues of war and corruption and it really spoke to people. I miss when buying a record was an event, and listening was a social experience. I honestly don't care for a whole lot of new music, but there are a few that come up here and there. I am a lifelong fan of Bonnie Raitt. She is always quality, right up my alley. My fears are that we are slipping into a jaded, posturing place in music, and I think the saving grace is these very raw sessions that people are posting on the internet where we see them being real and imperfect. 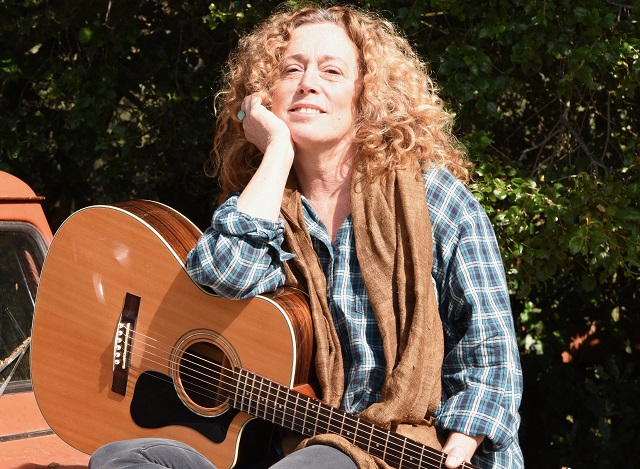 "My creative drive comes from the desire to connect with others on a meaningful level, to be understood, to get to the heart of things. I hope to express things that people may not have the words for, and to elevate the experience of life with the power beyond words, when the words and the rhythm and the melody come together." (Leslie Bixler aka Miss Bix / Photo by Suzy Demeter)

Believe it or not, it is still a man's world in music, with some notable exceptions. I find it very hard to be taken seriously as the writer and producer of my own music. Players still look to the men around me to find out how the music should be played. It disappoints me to see women either selling themselves out physically, when they are plenty talented enough without it, or being categorized as big belting blues mamas. I also notice that women are still pitted against one another.

What is the impact of Blues music and culture to the racial, political, spiritual and socio-cultural implications?

That's a wide-ranging question, so I won't even try to answer all of it. LOL I will say that any kind of music that is born out of suffering, to ease suffering, really expresses the bravery and depth of the slaves who were brought here and abused. They sang to save their lives and that is how I feel when I sing. The blues gave life to rock and roll and R and B and especially jazz. The African influences along with many others woven together have enriched our culture in ways that are impossible to quantify. When I spent time in Clarksdale MI at the Crossroads, I felt the oppression of the South mixed with the incredible richness of the culture, the music that grew out of that and it was powerful enough to make me realize that the Blues was kind of my real home, so to speak. If you are a person who understands the blues, you are probably going to have more empathy than the average person. What touched (emotionally) you from children's songs? What is the hardest part of writing this music?

Children are just trying to figure out how the world works, they are like little alien beings, completely innocent and excited and they are looking at everything through their eyes. This is kind of magical… Things that we take for granted become small miracles. They need someone to tell them the truth, to capture their sense of humor and playfulness, and not to talk 'down' to them, to involve them mentally and physically with the experience so they really take it in.

I would have liked to have been a famous musician who lived in one of the canyons in LA that was quite the music scene back in the seventies, like Laurel Canyon, where all the artists went to each other’s' house to make music together, and to hang out, sharing their talents and their writing together and living in a world of constant creativity.