Q&A with Maiju Lasola: President of Finnish Blues Society, Editor of Blues News, and Head of the Blue North Records

Maiju Lasola: Blues Behind The Scenes

The original Blues News magazine was first issued in summer of 1968 in Finland, making it one of the oldest of its kind in the world. Blues News is the first and currently the only journal in Finland focusing on blues and related music styles. It covers various forms of African American music like blues, R&B, soul, gospel, rock ‘n’ roll and, naturally, Finnish blues and roots music and musicians. It has published hundreds of interviews, reviews and articles every year both of domestic and international new upcoming stars but not forgetting already established touring and recording artists. Blues News magazine keep the blues scene in Finland vivid and alive. For the continuous work as the eldest blues magazine and also in recognition of its 50 Anniversary, Maiju Lasola editor of Blues News received in 2018, the Blues Behind The Scenes Award of European Blues Union at "Media" category. Maiju is President of Finnish Blues Society, Editor-in-Chief for Blues News, and Head of the Blue North Records. 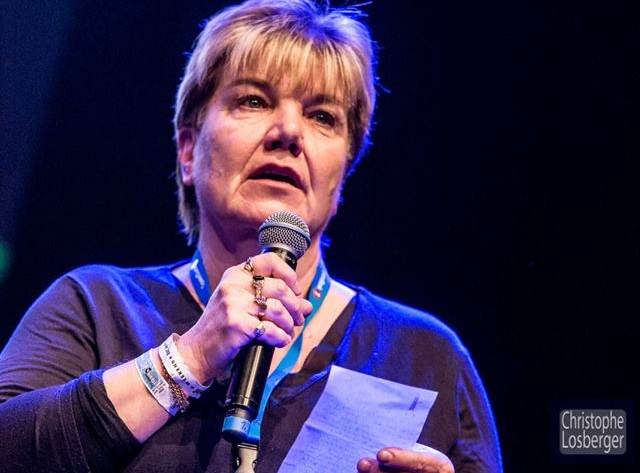 First of all, I’ve learned how wonderful it is that some of us (don’t mean myself now) have such talent as making music is, in many different ways. Without music the world would be very boring and poor place, also in very important emotional kind of way. I have a full respect for those who have been born with musical talent, and also with a capability to write amazing, many times very meaningful deep lyrics, story telling and every kind of musical inspiration. I particularly admire those who go their own way and do what they see as their musical path ignoring the opinions what “is right to do with the blues". I also feel the Blues as one kind of ”channel” by which people can express also their deepest feelings; pain, happiness, disappointments, sadness & joy. Blues is one important way to make your life happier & easier, in so many ways.

It has had a very big and special influence on my life. I feel that everywhere I've been and everywhere I go, I’ve seen/I see the world one way or another through ”musicglasses”. We’re travelling a lot with my husband and our travel plans are always made keeping also the important musical spots in our minds. Music is one thing which really connects people where ever you are in the world. Blues is also one kind of universal language, we all understand that we’re together in it, around the world, even if we don’t share e.g. the same language or political & cultural aspects in practice.

Unfortunately, I don't have any special talent to make music by myself, so I’ve always been active fan of Rock & Blues etc., and worked in different ways in the background of music scene. Organized concerts, different events, gigs, get togethers, parties etc. One part of that activism is my last almost ten years work as a leader of the Finnish Blues Society and Blues News magazine (FIN). That's my way to be active part of ”making music”. "I really hope that there won't be any “What is real blues and what is not” discussion anymore in the future. I'm so happy that the blues scene is so rich as it is now, and there are many different styles of it, many ways to make it. It's also very important to develop it further, with influences of modern life. And of course, sure, without forgetting and respecting the traditions." (Photo: Maiju Lasola, Mississippi 2017)

Which meetings have been important experiences for you? Are there any memories you would like to share with us?

I think that e.g. IBC and also EBC are very good examples of great network meetings. The most important thing is definitely not the fact who wins the challenge. They are big big get together parties with important possibilities to make new contacts and many times also to make new  friends who often share same kind of views of the world.

While traveling I've also been very lucky to meet many great characters in music scene. Talking about blues and roots music, I'll never forget the fantastic and interesting moments spent with Mardi Gras Indian Big Chief Monk Bodreaux in New Orleans where we've also other very good musician friends. One of them, amazing singer-songwriter-harpist-accordion player Johnny Sansone (who by the way introduced us to Big Chief Monk) has become one of our best and ”deepest”, hopefully lifelong  friends. This is a good example that you can also make good friends from all more or less professional walks of music life. And, of course I'll never forget the day we spent a couple of years ago with one and only Bob Koester at the Delmark Records. What an exceptional life he has had and what a special personality he is!

I miss originality. Somehow the music industry has spoiled a lot of making music from each other’s hearts. I mean that many main stream artists and bands seem to think only money and the best and musically easiest ways to earn it. Of course, artists in the past were thinking about earning money too, but still I think that the music they created was somehow more “honest” and “pure” and from their hearts than nowadays. And musically thinking the quality was of course much better than nowadays often in the main stream music. I'm afraid the music industry, which as said is mostly focused on main stream, will be even harder in the future. So, I'm afraid it will roll over many of the promising music talents who are making something different and don't fit in a music box of main stream. That it will be too difficult for them to make life in music scene. I really hope that my fears don't come true and there will always be courage to do something you feel is right and different even if there will be smaller audience for it. Of course, I would be very very happy if music media, e.g. music magazines, also the main magazines and radio + TV would understand better the importance of different genres and styles and all the variations in broad music scene.

If you could change one thing in the Blues world and it would become a reality, what would that be?

I really hope that there won't be any “What is real blues and what is not” discussion anymore in the future. I'm so happy that the blues scene is so rich as it is now, and there are many different styles of it, many ways to make it. It's also very important to develop it further, with influences of modern life. And of course, sure, without forgetting and respecting the traditions. "Without music the world would be very boring and poor place, also in very important emotional kind of way. I have a full respect for those who have been born with musical talent, and also with a capability to write amazing, many times very meaningful deep lyrics, story telling and every kind of musical inspiration." (Photo: Maiju Lasola, President of Finnish Blues Society, Editor of Blues News)

The most exciting period was/is of course the end of 60's and the beginning of 70's when the blues really landed in Finland in concrete. Blues News (FIN) was established in 1968, and many great Finnish blues bands started their career then. And of course, the present period is also very interesting; we have so many excellent world class blues artists/bands in Finland!

What characterize Blues News and Blue North Records philosophy and mission? What are your future plans?

Our aim is simply to keep the Blues alive in Finland, to make it more visible and known among the Finnish people. In other words, our aim is to preserve Blues heritage and expand the awareness of the Blues in Finland, to keep it alive also in the future. To reach our aim we (= Finnish Blues Society) will continue publishing the magazine, publishing records, organizing various events and trying to be in every way “visible”. One important part of our actions is, of course, the creation and maintenance of international connections.

Would very much like to travel to the 1850's-1930's New Orleans, Louisiana and the other places in Deep South; Mississippi, Georgia, Alabama etc. To see, learn and understand more about the Black History, Roots of the Blues and other Roots music, Mardi Gras Indians history and tradition. That would be really The Journey!