"I believe that music is ingrained in our DNA as humans and is therefore very important to our survival. In other words, it gives us a rhythm to live our lives by."

CW Ayon may call the Southwestern deserts of New Mexico home but his soul is deeply rooted in the Blues and grooves of the Mississippi Hill Country. With a rather simple kick/snare and tambourine setup he lays down solid beats while picking out some catchy hooks on anything from acoustic to resonator guitars. Sometimes dropping in a bit of harmonica for good measure. All the while building a sound and playing style that is deceptively larger than it seems. Cooper "CW" Ayon has lived in various places around his beloved state New Mexico, but hails originally from Reserve. His wife, Carol, is a trained musician who taught him how to play the guitar. He excelled with this instrument before he could learn to read notes and joined a few Las Cruces bands in 2004, including the Dirty Clydes. In these bands, he played rock music and covers and — being a blues man — tried to add as much blues as he could. After the bands split, Ayon struck out on his own, literally, as his own drummer, guitar player and singer. 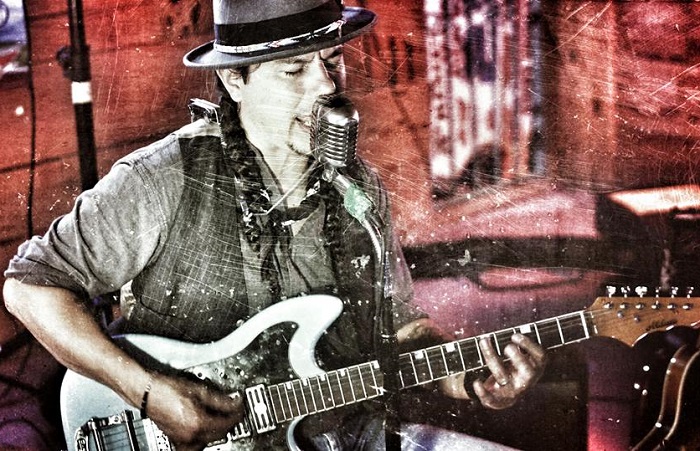 Since 2009, Ayon released original albums under the Solitary Records label out of Chicago every year. He took a recording break in 2013, but recorded a live album from the Rio Grande Theatre. He's back with "Setting Son" in 2014. While living in the little town of Reserve, the Ayon family could only catch one radio station from the Navajo reservation. Ayon has Native American roots. His father, Pete Ayon, is southern Cheyenne and his mother, Linda Day, has a mix of Native blood coming from Oklahoma. Starting when he was a teen, Ayon and his brothers — including a twin brother, attended powwows with their father, who is a gourd dancer. They take part in this dance, too, and the last powwow Ayon was at was sometime last year, he said. Although he has indigenous roots and does his long black hair in braids, he does not mean for it to come through in his music — although some people swear they can hear it. Ayon's influences are Junior Kimbrough, R.L. Burnside, John Lee Hooker, Muddy Waters and Robert Belfour, the original founders of hill country and blues.

I find that playing Blues and music in general allows me to deal with certain emotions and thoughts that otherwise would have no other outlet. Blues to me means total expression of freedom. I think that it really breaks down barriers between people and allows them a common interest to connect them.

How do you describe "CW" Ayon sound and songbook? What characterize your music philosophy?

My sound is my attempt at sounding like Junior Kimbrough and RL Burnside. I love the feel and groove that those guys had in their music. My philosophy on music is to keep it simple and honest and ride the groove.

What were the reasons that a Native American musician started the Blues/Folk/Roots researches and experiments?

Blues was just the only style of music that really moved me. I loved the fact that it was about everyday events that affect us all. 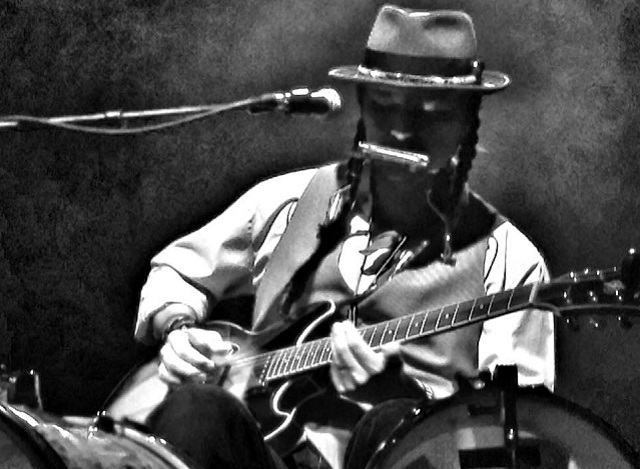 "Blues to me means total expression of freedom. I think that it really breaks down barriers between people and allows them a common interest to connect them." (Photo; Cooper CW Ayon)

There have been so many that it’s hard to narrow it down. Definitely at the top of the list is meeting and getting to play with Denis Agenet and Abdell B. Bop in France recently. Those two guys really made me play the best that I could play. The best advice anyone ever gave me was from my mother, she told me to throw away my guitar pick and use my fingers. It was literally the greatest benefit to my playing that I’ve ever experienced.

I played at an outdoor festival in Nebraska in a rain storm, it felt like it was me against the weather and I survived. In 2014 I was scheduled to play at this outdoor festival and about 15 minutes before I went onstage a big storm hit and I was unable to play. Fast forward to 2015 at the same festival, about 15 minutes before I was to go onstage a storm hit, but I was determined to play my set at this festival so I decided to go ahead and I played in the rain and wind and eventually got everyone in the crowd on the stage with me to keep them out of the rain. Needless to say, we had a great time. It felt like everyone was playing my songs with me, not just as an audience but as a part of the music. It was such a great experience. I’ll never forget it.

I miss the rawness the most. The old Blues that I like had a certain quality to it that seemed new and old at the same time. I just hope that people keep playing Blues forever, I believe that it truly is one of the great art forms. 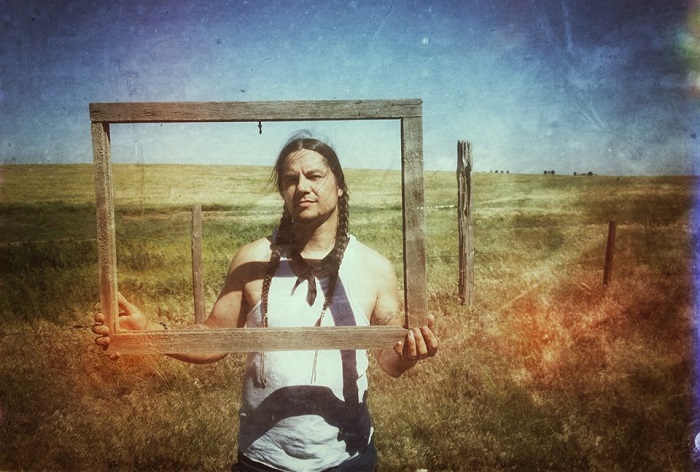 "The best advice anyone ever gave me was from my mother, she told me to throw away my guitar pick and use my fingers. It was literally the greatest benefit to my playing that I’ve ever experienced."

I would change the fact that record labels and businessmen seem to have more control over the music than the musicians. People that create music do so from their hearts and souls and then some businessman comes along and claims it like they created it and slaps a price tag on it and keeps the money for themselves. I understand the fact that music is valuable to people but, that doesn’t always mean that that value is exclusively about money.

What are the lines that connect the Blues with the Native American music and traditional forms?

I think that Hill Country Blues in particular has a groove based simplicity to it that resonates with a lot of people because the steady beat grabs you instantly, much like the beat of a Powwow drum. Steady like a heartbeat.

What is the status of Native Americans in music? What touched (emotionally) you from the one-man band style?

I honestly don’t know much about Native American’s in music, I can only speak from my experience. I do know that in the Southwest there are several bands that are made up of only Native American members and they’re fantastic musicians. But I really don’t believe that race has anything to do with how a person listens to or plays or enjoys music. If you love music, you love it plain and simple. What attracted me to the One Man Band (OMB) style of playing was again, the simplicity. I loved the fact that one musician could deliver a solid full sounding performance by him or herself. For me it is very freeing and unrestrictive, if I want to play a particular song fast I can, and if I want to change a lyric or a melody, I can, in the middle of a song. I can write a new song one night and play it the very next day at a show, or completely make up a song on the spot at a show.

What is the impact of Blues and Folk Roots music and culture to the racial, political and socio-cultural implications? 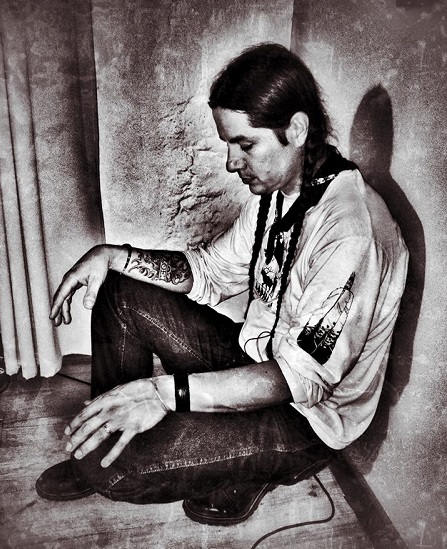 Wow, great question. I don’t know that I’m really qualified to answer that. I can say that music is a powerful force, and if one wanted to use it to sway minds and get people to think in a certain way, that is completely possible. Which was proven with the protest songs and music in the 60’s. It gave people a voice and the world stood up and took notice. Fortunately I’ve only known music to be positive and used to help people and make them feel good or remember a certain time in their lives. I believe that music is ingrained in our DNA as humans and is therefore very important to our survival. In other words, it gives us a rhythm to live our lives by.

Another great question, let’s see. I think I would like to go back to a time before people decided that they owned everything and just lived out their lives with their families, in tune with all the natural rhythms that surround us everyday. I guess it all comes back to living simply, use only what you need and give what you can, and don’t forget to smile and sing when you feel like it.