Q&A with one-man band Bob Log III - one of the best, fastest and strangest Blues slide guitarist of today

"All over the world I notice how much the same everyone is. Of course there are differences, but everyone speaks music. Everyone speaks guitar and drums. I can communicate in a country where I am unable to speak the language. I should say my guitar communicates."

Bob Log III in his blue full-body Cannonball man suit and a face-shield wired with a headset microphone is one of the best, fastest and strangest American Delta Blues Slide Guitar player of today. Bob Log III was born in Chicago, Illinois and raised in the suburbs of Phoenix, Arizona. In the early 90's he Formed together with Thermos Malling the incredible DOO RAG who's pioneered the whole Blues 'punk' or Even Tekkno Scene at this time, the Band Split off and Bob Log (Robert Reynolds III) continued alone as the One Man Band, Touring all over the Globe. He acquired a kick-drum and a homemade foot cymbal which he custom-outfitted with a kick pedal of its own. These instruments, combined with his slide guitar work, distorted telephone microphone vocals, and Boom-Chik-a-Boom drum machine accompaniment, form the framework on which Bob Log constructs his songs. In the summer of 1998, Log signed to Fat Possum to issue his solo debut, School Bus; Trike (1999); and Log Bomb (2003); in 2008 signed with Voodoo Rhythm Records for the album 'My Shit Is Perfect'. One-man band Bob Log III takes this concept to extremes, handling vocals, guitar, and drums simultaneously, all while having his identity obscured by a strange mask/helmet. He received his first guitar at the age of 11, that led to an obsession with AC/DC, and eventually, more traditional blues artists, such as Mississippi Fred McDowell. As a result, Log began playing in several local blues rock outfits. It was during this period (the early to mid-90s) that Log first came up with the idea of performing as a one-man band. When Malling (Doo Rag) left the group, Log was forced to finally go at it alone. Leaving Arizona, a visit to a thrift store in Lawrence, KS, resulted in Log purchasing the infamous aforementioned helmet, which he affixed microphones to the inside of, resulting in the founding of his 'microphone helmet'. Log began augmenting his blues rock with drum machines and other more primitive forms of percussion (such as mere foot stomps).

What do you learn about yourself from the rock n’ blues culture and what does the blues mean to you?

The blues music that I loved came from something out of nothing. No money, no fancy guitar, no fancy amp or guitar tech. You made a party with what you had. And you sing about what you knew. "Blues Culture" if what you mean is life in Mississippi was completely alien to me. I grew up in Arizona. I rode my bike to go play pinball. I wanted to play party guitar. I first heard Mississippi Fred McDowell on a cassette when I was 16.

How do you describe Bob Log III sound and songbook? What characterize your music philosophy?

I describe my music as a Guitar Party! with the exclamation point. I make something fun to play on guitar, then add drums to it until it’s even more fun to play. I am usually trying to sound like two guitar players and at least two drummers, sometimes three. People dance and smile so much their faces hurt in the morning. 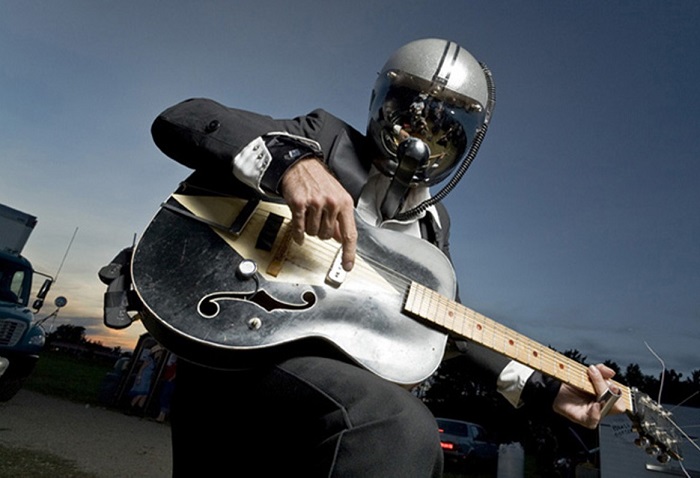 "Music is a lot of different things to a lot of different people. Love, protest, anger, joy, nonsense and madness. No one sees it the same, there are no rules, anyone can participate, music school or not. It seems to me that is a good thing for the socio cultural implications."

Most important meetings... R.L. Burnside when I became his guitar player for 8 days... His advice was to hang in there like a dirty shirt. Lux Interior of the Cramps... his advice was to not crash the van into his tour bus anymore. Milton Berle once told me - "Do what thou Wilt". That’s a long story...

Memory from gigs... Every gig is a memory. I drive around the world, go into usually the craziest bar in town, where the most fun adventurous people dance their asses off. It’s ridiculous. A lady peed on my leg in Belgium onstage. Once in Germany I showed up for the gig one month early. I have had 23 inflatable boats stolen in the past 2 years. In Sweden I was almost killed- by a balloon! and a girl tackled me in Omaha, but it was ok. I think it was her birthday beau.

I don't really spend a lot of time thinking about the past or the future of the blues. The past still there for us all to listen to, so it’s not really gone. The Future? People used to learn to play guitar from their neighbor. Now they learn from YouTube. But is that bad? It doesn’t have to be. If kids learn music because they love it then the future will be great. 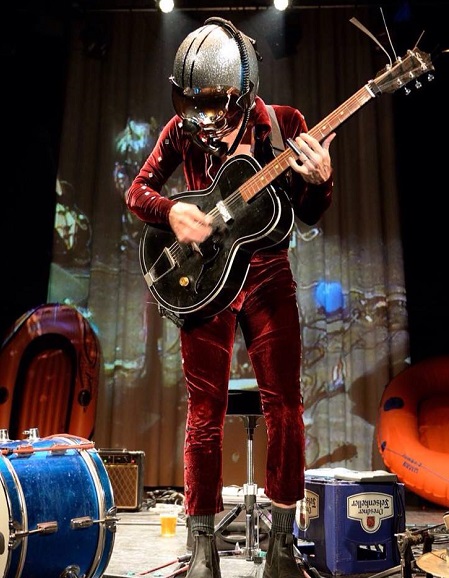 In my musical world I would ask just this- Free bags on airplanes for all musicians. Other than that - in music there should be no rules. Anyone can do whatever they want. That's the beauty and ever changing nature of music.

"The blues music that I loved came from something out of nothing. No money, no fancy guitar, no fancy amp or guitar tech. You made a party with what you had. And you sing about what you knew."

What are the lines that connect the legacy of Blues with Punk and continue to Rock n’ Roll and beyond?

Old Blues music to me was the beginnings of a guitar centered style of music, some of which was aimed at making the ladies dance. Rock and Roll took the dancing and party part of Blues music to a new level, and actually started to create a bit of mayhem in with the mix of dancing and partying. Punk rock came along, and most of it just sucked the fun right out of music, leaving only angry mayhem, and no dancing. OK Some punk rock can be fun (New York Dolls) but I don't play punk rock. My songs are not angry. My Songs are about the Party in the room we are in.

What are your conclusions about people and what touched (emotionally) you from your trips around the world?

All over the world I notice how much the same everyone is. Of course there are differences, but everyone speaks music. Everyone speaks guitar and drums. I can communicate in a country where I am unable to speak the language. I should say my guitar communicates. I just hang on to it as tight as I can...

Music is a lot of different things to a lot of different people. Love, protest, anger, joy, nonsense and madness. No one sees it the same, there are no rules, anyone can participate, music school or not. It seems to me that is a good thing for the socio cultural implications. 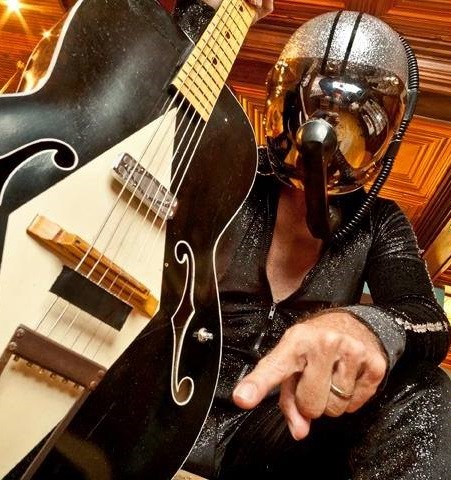 In a time machine? This adventure would change daily- but today I would go back to the time when humans first made music.