"The world has the Blues. The Blues is universal. There is the witty & funny, the sad & lament full, there's Life & Truth."

The Reigning Queen of Beale Street

Pittsburgh, PA native Barbara Blue doesn't remember life without music. Her answer to the question “When did you start singing?” will always be “since the day I was born (Oct. 12, 1958) and my plan is to exit this life the same way”. Early childhood years were spent singing in church choir, school choir, school band (flute), piano lessons, school plays and with radios throughout the house. Playing a solo show (vocals & guitar) Barbara Blue played every club, biker bar, party and corner possible. From 1980 -1987 Barbara lived in Detroit, MI and was bartender/college student by day and a vocalist by night playing gigs all over the city with the “City Limits Blues Band”. In 1987 Barbara Blue returned to her hometown of Pittsburgh, PA where she put together a band and played 6 nights a week at various clubs for 10+ years. Opening shows for locals and road acts. Delbert McClinton, Jeff Healey, Marcia Ball, Billy Price, on and on and on … In 1994 Barbara recorded her debut CD “Out Of The Blue” at The Control Room in Pittsburgh PA. Ms. Blue also traveled with her band playing gigs in Memphis, Clarksdale & NOLA (Hogs Breath) to compete in the very early conception of the IBC. 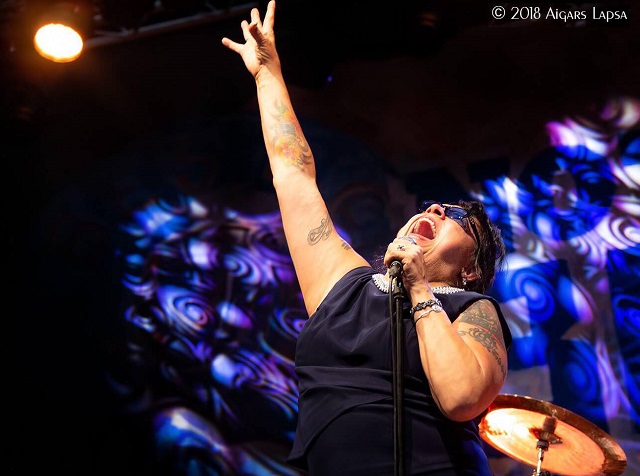 How has the Blues, Gospel and Soul music influenced your views of the world and the journeys you’ve taken?

The world has the Blues. The Blues is universal. There is the witty & funny, the sad & lament full, there's Life & Truth. No matter where I travel I see it all around, on faces, in the food, in the moods, in all the dance interpretations. This music creates one language that all can understand even without fluently speaking each other’s languages. I LOVE the world and all is has to offer. I LOVE to travel and bring good times, love, joy and hope to ALL people.

How do you describe Barbara Blue sound and songbook?

My sound is my soul. I put it right there on a platter in front of you for you to feast on and relate to and identify with. I love when we together see the irony in life through music and have a good laugh or a philosophical thought and maybe lighten up and find some forgiveness for ourselves and for others. For me to witness folks reverberate feelings through my music, and release some of the everyday burdens, and wade through the trials & tribulations that we all experience in life is my sound. My songbook is LIFE plain and simple. My LIFE is THE BLUES.

My musical philosophy is characterized by performing for over 40years, five to six nights a week for over 90% of that time. I've paid a lot of dues. I have lived through times I wouldn't wish on my least favorite people. In the end Music = LOVE ... always has always will. When you get it, you got it. 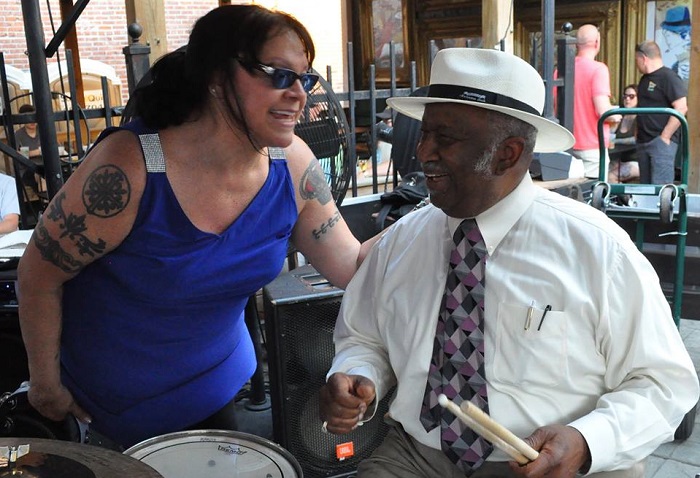 "I hope the Blues ..STAYS REAL & lives on forever! I fear that "they" will allow the REAL BLUES to be diluted beyond recognition... kind of like how country music took a hit." (Barbara Blue & Bernard "Pretty" Purdie / Photo © by John Henry Photography)

To share a few ...Meeting Silky Sullivan in May of 1997 was monumental. I landed a job on Beale Street in the heart of the Memphis Music Scene. Another monumental to say the lease meeting was in Porretta Italy July 2018 at the "SOUL FESTIVAL" when I met the most wonderful, illustrious and humble man in the world. Mr. Bernard "Pretty" Purdie and his very lovely wife Celia. Bernard agreed to play drums on my new CD. We are all family now thanks to a chance encounter thousands of miles away from our homes.  FATE!

Kim Wilson once said to me somewhere in the early '90's "Keep on doing what your doing Barbara, "they" can’t stop YOU!!" as the years roll by I figured out who "THEY" were and this has such a deep sense on meaning to me... When the going got really tough I would always remind myself of what Kim had said!! Thanks Kim!! More than you will ever know!!

So Many ...A studio session for my MEMPHIS BLUE CD in Well Spring Studios with Ronnie Earl... Ronnie says "Hey Barbara let’s just write a song, one take... I said ok... he started playing and I started sing and we started recording and "800 Mile Blues" was born in one take.  Ronnie looked at me and said " Barbara, you know most people can't do that!" I said "Ronnie you otta come on down south and hang with us we do it ALL NIGHT LONG on the porch! Then he said, "Barbara, I'm gonna give you something...a pause... "Barbara Blue is somewhere between an earthquake and a hurricane." Many thanks to your Ronnie! You are a true gem!!

One of my most favorite "jams" that I will share with you was in Aspen Co... Blues & Jazz Festival... it was the first time I had ever seen RAY CHARLES LIVE ... OMG... vivid memory... And "The Raeletts" impeccable!!! I was privy to back stage thanks to my association with Taj Mahal ... Then there was a jam session in a cool swanky bar in the resort... so I sang my first song I can’t even remember what that was now ...but my friend with me Jana said there was a guy who had gone to get his saxophone because he wants to sit in with ME!!  I was like ok... well "THAT GUY" was Al Jackson Ray Charles' band leader ...we did the Billie Holiday song "Lover Man". Yes, there is a heavenly feeling that everything is gonna be alright when Al Jackson cops your vocal lick... I was high on that for months to come. That was an incredible moment in my time.

Also spending priceless time with Jessie Mae Hemphill. Ms. Jessie was being evicted and I had to help find here a new home. We shared many a laugh, songs, recipes, bible verses and stories of our lives. Jessie never made it to that new home she passed in Memphis, TN July 22, 2006. She was the last of the living original hill country blues women. RIP sweet Jessie Mae. 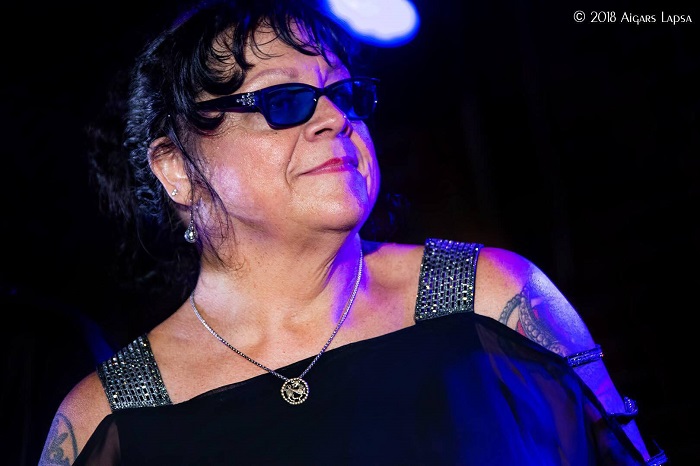 "Women in music is a tough life. You really gotta LOVE it to stick with it.  VERY FEW rise above like the men’s. Count the difference on any blues festival line up or radio/satellite/streaming or otherwise."

I miss hangin' listening to stories, and jammin' with all the cool old cats on Beale Street... BB King, Rufus Thomas, Calvin Newborn, "Gatemouth”, James Cotton, Little Milton, Pinetop, Sam Myers, Hubert Sumlin, Mose Vincent, Fred Ford, Preston Shannon, on and on and on...I hope the Blues ... STAYS REAL & lives on forever!!! I fear that "they" will allow the REAL BLUES to be diluted beyond recognition... kind of like how country music took a hit.

I would like to see the game field changed to where everybody gets paid fairly for the creative work that they do.

What are the lines that connect the legacy of American Roots Music from Blues, Soul, R&B, Hip Hop & Americana?

What has made you laugh performing on Beale Street and what touched (emotionally) you from the local circuits?

After over 5,000 show on the same stage and much laughter going on nightly, I will sum up some of the BEST laughter belongs to the children and youngin's.  Sometimes I invite them to sing/dance/play tambourine and sometimes they don't need an invitation they just jump right up and show me what they got.  Sometime people get engaged or just got married and have their first dance with me or their first date.  Beale Street is the coolest place to celebrate within a 250-mile circumference.  I have celebrated many emotional occasions repeatedly, kids being deployed to war zones, kids coming back from war zones, kids never coming back from war zones but the last good time they had was with me on Beale Street and we celebrate them again.  Same with families and family members, I celebrate with them, they are celebrated into this world and celebrated going out ... it's LIFE.. LIFE touches you emotionally. 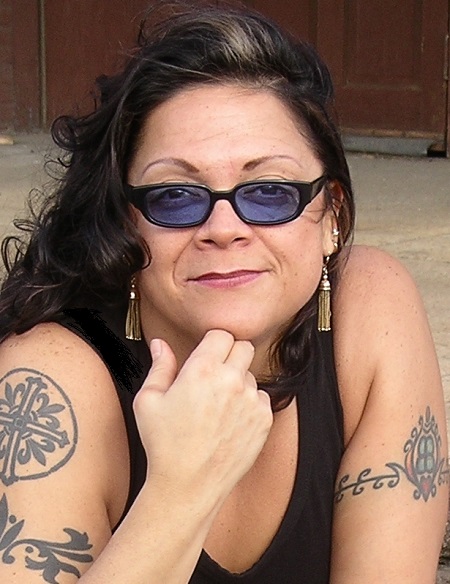 Humm loaded question... I just wrote a new song for my NEXT record!! "Cock Block Blues" self-explanatory. Women in music is a tough life. You really gotta LOVE it to stick with it. VERY FEW rise above like the men’s. Count the difference on any blues festival line up or radio/ satellite/ streaming or otherwise. I have 2 radio shows and let me tell ya ... I do a lot of research to program them and the ratio of women to men in this business is mind boggling to me. But slowly we move up the hill, step by step... Keep up the good fight my sista's / Women In Blues!!!

Memphis is very unique musical Mecca. I have been told by many, Steve Cropper, David Porter, The Mitchell Family, Lannie McMillan and many others that there were no color - racial issues in the music business here until Dr. King was assassinated ... AMEN!! I feel we have re-instated the original Memphis Music Vibe ... We have a saying on Beale Street I try to live by ... It's not Black, it's not White ... It's the BLUES!

I would like to spend the morning with Ma Rainey & Bessie Smith and the night with John Lee Hooker.