Q&A with Reverend Freakchild - blues and rock tunes from Muddy, Reed, and the Beatles, along with Grateful Dead

"There is no doubt that Blues music is intertwined with the history of the African American experience and its subverted and simultaneously celebrated arts and culture. And there are cases to be made that the blues are African in origin - as you could take everything from those slaves but you couldn’t take the melodies from their minds."

Reverend Freakchild: The Blues of Dharma

In the tradition of such Holy Blues Reverends as Reverend Gary Davis – such is the irreverent Reverend Freakchild. The Rev. primarily performs solo acoustic these days, and sometimes as a duo with the Minister of Bass. The Rev. has also recorded with some amazing musicians: Melvin Seals, Mark Karan, Chris Parker, Hugh Pool, Jay Collins, and G. Love. He has played in many bands in the past touring internationally. The Rev. spent 3 years off-off-off Broadway singing blues and spirituals on Sundays at Tobacco Road, the now defunct NYC hippie hangout replete with drug addicts, hookers and music freaks. The Rev. has also served as a member and featured soloist of the Metro Mass Gospel Choir performing at such venues as Carnegie Hall, Avery Fischer Hall and the Town Hall Theater. The Rev’s music has been featured in many TV programs and commercials, and national radio advertising campaigns. He grew up in Hawaii, holds a degree in philosophy and religion from Northeastern University in Boston and now currently resides in Colorado pursuing a Master of Divinity Degree at Naropa University. He continues to perform and preach proclaiming, “Music is my religion. 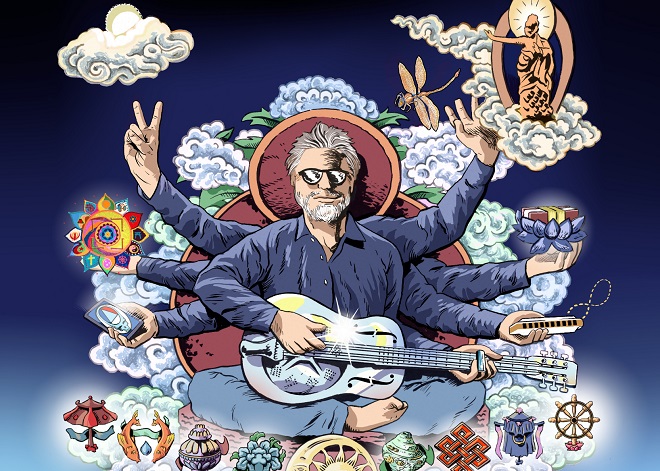 How has Buddha, the Beats and Counterculture influenced your views of the world and the journey you’ve taken?

I would’ve loved to have heard Muddy Waters play in Chicago, and then taken Kerouac and him to India, maybe invite Dylan along as well. And when we got back hang with Janis Joplin, the Jefferson Airplane and the Grateful Dead in San Francisco. I'm a sober neo-hippie now, but it would have been great to experience the acid drenched hippie love and music of that ‘innocence to experience’ era of the 60’s. All that art and popular counter culture had a great influence on me. Timothy Leary and Ram Das would have been cool to hang with as well – that Be Here Now book changed my life. Also I would have liked to have spent some time with the Buddha under the bodhi tree after his enlightenment and sung some songs of realization with him.

How do you describe the new album's songbook? How do you want it to affect people? Where does your creative drive come from?

We invited musicians from the extended Grateful Dead musical family to form the backing band on this latest release. The Bodhisattva Blues features an all-star cast of supporting musicians, including Melvin Seals, who has played organ and piano with the Jerry Garcia Band for many years, and Mark Karan and Robin Sylvester of RatDog. In addition, Chris Parker (who has played with Bob Dylan and Stuff among others) provides drums for the album, with Jason Hann of String Cheese Incident providing some extra percussion.  Hugh Pool, A.J. Fullerton and Jay Collins also contribute to the album. The track list is made up of Blues and Classic Rock tunes, including Big Boss Man, Little Red Rooster, Friend of the Devil, I Know You Rider, Black Peter, Yer Blues, Imagine, Death Don’t Have No Mercy, And We Bid you Goodnight.

Prior to recording this album, I had had several conversations about music and the Blues with Mark Karan (who has played with many members of the Grateful Dead). The idea was to do an album that revisited the Blues with a hippie esthetic. Kind of like the Grateful Dead did when they were a Blues band lead by the formidable Pigpen. So there are several tunes on the album like Big Boss Man that we brought back from the Dead’s version to the original version – like doing the intro and the harmonica solo on that tune more like Jimmy Reed – and then letting Mark and Melvin stretch out for a couple choruses after that like a jam band would.  Then the album’s ultimate intention became using these blues tunes to provide a significant sonic milestone on the journey to release negative karma and actualize transcendent wisdom. So the overall motivation is an aspiration that the music and the creative endeavor of this album be of benefit to all sentient being, by becoming aware of their suffering through the beautiful music of the blues, and perhaps being of some help on their path to enlightenment! 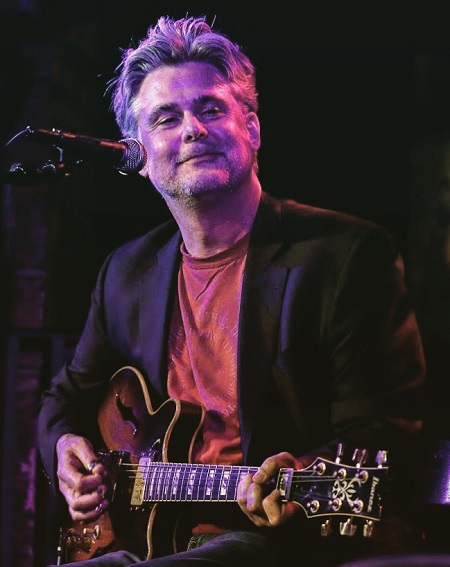 "I try to see myself in the musical tradition of reverential Bluesmen like blind Reverend Gary Davis. (Reverend Freakchild / Photo by Evan Fairbanks)

We put a cool spin and fresh perspective on some classic blues and rock tunes that I love from Muddy Waters, Jimmy Reed, and the Beatles, along with a few Grateful Dead favorites on this latest album. The theory behind The Bodhisattva Blues is that I play the psychedelic country blues, and practice and study the Dharma (Buddhism). There’s so much about the sources of sorrow, joy and human suffering in both.

I’ve been very fortunate to work with some amazing musicians over the years. One of them, Hugh Pool, I consider my Blues guru. He helped produce this latest album, The Bodhisattva Blues, and we recorded many of the basic tracks at his studio in Williamsburg Brooklyn, Excello, with myself and the amazing legendary drummer Chris Parker. Hugh also lent his master (NY Blues Society) artist skills of harmonica, lap steel and singing to the album. I think this is like the fourth or fifth album we’ve done together and he always pushes me to be a better musician and adds to my artistic vision. He has given me many pieces of great advise over the years but the one that has stuck with me the most is, “Open your eyes and ears and ya might just learn something.”

Well a dream would be to have a Rev record go gold or platinum and maybe even win a Grammy, and then be able to continue to tour the world with my music in a grand style.

Make an account of the case of the blues in Colorado. Which is the most interesting period in local blues scene?

There’s actually a pretty cool Blues scene here in Colorado. We worked with Hazel Miller a few Rev albums ago. She added amazing vocals to the single “Dial It In!” – she’s a local legend.  And for this latest release we had the pleasure of featuring a few Colorado Bluesman. Scott ‘Shack’ Hackler tickles the ivories on our version of the classic Little Red Rooster. And A.J. Fullerton, a young up and coming Bluesman plays some amazing slide guitar on our version of I Know You Rider. Also we were able to invite Paul Soderman, a Blues singer who’s been on the scene for years in Colorado, to help sing the bridge on Black Peter, and he helped to lend some spiritual gravitas to the project. 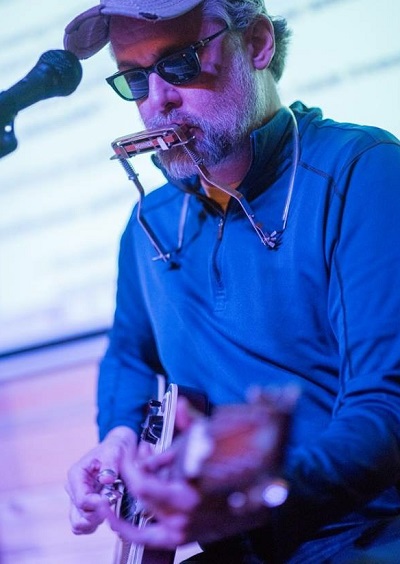 I try to see myself in the musical tradition of reverential Bluesmen like blind Reverend Gary Davis. We did a version of his tune Death Don’t Have No Mercy on this latest album with Jay Collins (who’s played with Greg Allman and Little Feat) playing Bansuri Flute. Although my reverential leanings are of the more psychedelically induced variety, I appreciate singing some of those beautiful spirituals. The wisdom of simple songs, writing or learning them, singing them and getting in touch with others and ourselves through this art form continues to be a blessing.

"Also I would have liked to have spent some time with the Buddha under the bodhi tree after his enlightenment and sung some songs of realization with him."

I love Blues music and I'm a student of Blues but I am by no means an ethnomusicologist. There is no doubt that Blues music is intertwined with the history of the African American experience and its subverted and simultaneously celebrated arts and culture. And there are cases to be made that the blues are African in origin - as you could take everything from those slaves but you couldn’t take the melodies from their minds. There is an evolution of Blues music as it mixes with Native American rhythms, European influences and other music from around the world, but like Robert Johnson sang, “The Blues ain’t nothing but a low down shake and chill, if ya ain’t never had ‘em I hope you never will.”