Q&A with saxophonist/composer Rich Halley - based in the tradition of jazz & blues, express genuine emotion

"Jazz and Blues have both changed the culture and in turn have been changed by it. The way musicians view society and culture affects the way they present their music and sometimes this is an expression of political ideas."

Rich Halley: The Nature of Expression

Rich Halley is a jazz saxophonist and composer from Portland, Oregon. He has released 16 recordings as a leader and is known for his asymmetrical and rhythmic compositions and his fiery playing. Growing up, he spent much of his time hiking, camping, hunting and fishing and at an early age developed a lifelong passion for nature and the outdoors. He spent summers at the family homestead in Richland, OR near the Wallowa Mountains. At 15, he discovered jazz, and immediately became intensely interested in the music. Halley began playing clarinet at age 11 and tenor saxophone at age 15. In 1965-66 he lived in Egypt where he played in a band with an international repertoire. When he arrived at the University of Chicago in 1966 he found himself surrounded by blues music and culture and the explorations of the AACM.                            Rich Halley / Photo © by Robert Pyle In 1967-68 he played in Home Juice, a blues band in Chicago that included Jeff Carp, Jordan Sandke and Paul Asbell. In 1968 he moved back to the Western US where he played in Latin bands, rhythm & blues bands and jazz groups in San Francisco, Albuquerque and Portland. His early influences included Sonny Rollins, John Coltrane, Dexter Gordon, Ornette Coleman and Albert Ayler as well as Jim Pepper, who was also from Portland. Between 1968 and 1975 he interspersed periods of musical activity with time spent climbing mountains and exploring the deserts and jungles of the Western US and Central America. From 1977-81 Halley performed in the experimental group Multnomah Rhythm Ensemble that explored improvised music in combination with multi-media. Halley co-founded Portland’s Creative Music Guild in 1991 after being disappointed with the lack of performing opportunities for non-traditional jazz musicians. Since 1994 he has been the musical director of the Penofin Jazz Festival in Northern California, which has presented many leading creative jazz artists. Rich Halley is also the leader of the Outside Music Ensemble, a four horn/two percussion sextet that performs in purely acoustic outdoor settings. In 2010, Halley released Live at the Penofin Jazz Festival featuring cornetist Bobby Bradford on his own label, Pine Eagle Records. Around this time he formed the Rich Halley 4. This group has released three recordings. Rich Halley has worked with poets and dancers over the years and in 2011 he released Children of the Blue Supermarket with poet Dan Raphael. Halley was educated as a field biologist and received an M.S. in Biology from the University of New Mexico where he did research on rattlesnakes. His lifelong interest in nature has informed his music and led him on many trips into wilderness regions around the world.

What do you learn about yourself from the Blues & Jazz music and culture? What does the blues mean to you?

The music I write and play is constantly evolving so the process of creating music is one of continual self-discovery. The blues is at the core of many types of American music. It’s a sort of universal music in that all kinds of different emotions can be expressed through it: sadness, happiness, anger, feeling carefree, wistful etc. My experience playing in blues bands in Chicago was a big influence in forming my musical identity so the blues is central to my music even though I don’t play literal blues structures often these days.

How do you describe Rich Halley sound and songbook? What characterize your music philosophy?

My music is based strongly in the tradition of jazz and blues. Melody, rhythm and harmony are all very important to me. I want the music to tell a story and express genuine emotion. I learned how to play by listening to the great musicians who created the tradition and also by playing with some of them. Sound is really important to me. All the great players had their own individual sounds that were clearly recognizable. If you don’t have a sound, the rest of it doesn’t really matter because music IS sound. My music is a personal evolution of the historical tradition that expresses the way I hear things at any given time. Most of the music we play has written portions that set up a general feel that serves as a springboard for open improvisation by the group. I love the tradition but I choose to extend it in order to make it my own original expression. 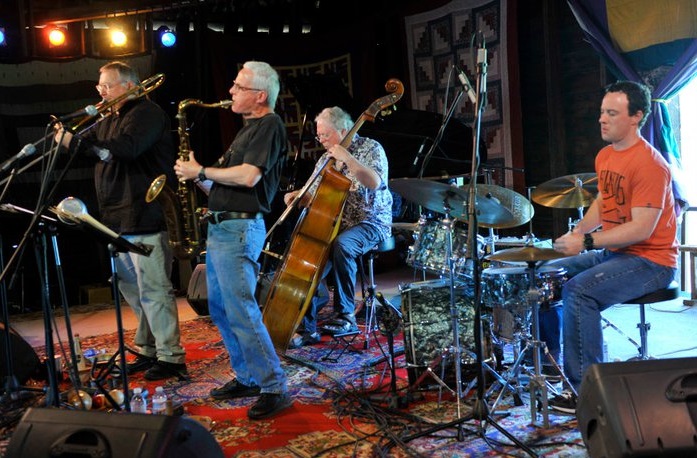 "I think that there is less emphasis on feeling and the importance of telling a story in music today. I also think that there are far too many tributes. The best way to honor the musicians who came before you is to create your own original expression. After all, that’s what they did." (Rich Halley 4 with Michael Vlatkovich, Carson Halley and Clyde Reed / Photo © by Robert Pyle)

What were the reasons that made the 60s to be the center of Jazz/Blues/Rock researches and experiments?

I began working as a professional musician in the 1960s so the music of that period was very important in forming my musical identity. At that time there was a lot of social change occurring and also a lot of interest in trying to create new forms of musical expression. The changes in the music probably reflect to some extent all the social change that was occurring but also a willingness to experiment musically. During the ‘60s I was learning the language of jazz and blues and trying to develop my own style. All these years later I suppose those influences are discernable but they have evolved into my own version of the music.

In many ways, the most important influences on your music are the people that you play with, especially those you play with a lot. I was strongly influenced by the musicians I met on both the avant jazz and blues scenes in Chicago in the 1960’s.  These include people ranging from Anthony Braxton to Otis Rush. Later I played a lot with Clyde Reed, Michael Vlatkovich, Bobby Bradford, Vinny Golia, Carson Halley, Rob Blakeslee and Dave Storrs among others. All these folks have influenced the way I approach music.

Perhaps my favorite gig was an annual concert we did on top of Powell Butte in a nature park outside of Portland. The audience had to hike in to the concert which was in a meadow overlooking snow-capped peaks and many other mountains. It was a really magical place to play. My group The Outside Music Ensemble, a sextet with four horns and two drummers, did this annually for 14 years until local politics ended the concert series.

I think that there is less emphasis on feeling and the importance of telling a story in music today. I also think that there are far too many tributes. The best way to honor the musicians who came before you is to create your own original expression. After all, that’s what they did. 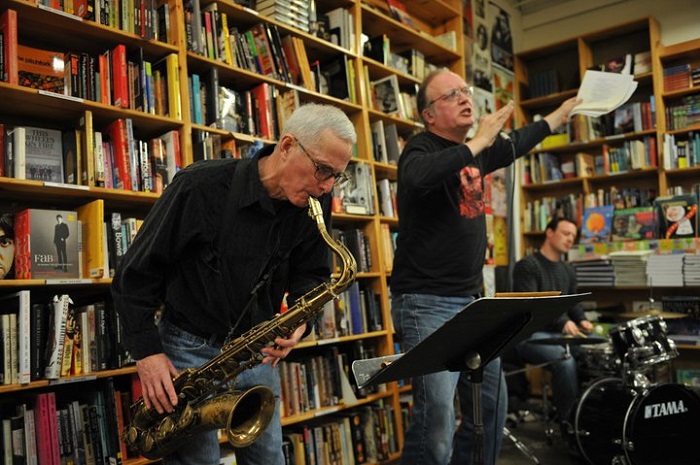 "Music and literature are both art forms in which people are able to translate their feelings, concepts and experiences into a meaningful structure that communicates to other people. The music I play tends to be a group effort so it is different in that respect from most poetry, but the creative process is similar in both art forms."  (Rich Halley and poet Dan Raphael Photo © by Robert Pyle)

I would like to see a more expansive scene where there are more opportunities to perform creative music.

What are the lines that connect the legacy of Jazz & Blues with literature? How important was/is poetry in your life?

Music and literature are both art forms in which people are able to translate their feelings, concepts and experiences into a meaningful structure that communicates to other people. The music I play tends to be a group effort so it is different in that respect from most poetry, but the creative process is similar in both art forms. I’ve always liked poetry and have read a good deal of it over the years. I particularly like some of the classic Greek and Chinese poets. There is a timeless quality to the best poetry that speaks clearly to the essence of things, even over centuries and millennia.

As Charlie Parker said, “if you don’t live it, it won’t come out of your horn.” The music you play inescapably reflects the life you live and playing that music certainly affects the way you live your life. Because of this, Jazz and Blues have both changed the culture and in turn have been changed by it. The way musicians view society and culture affects the way they present their music and sometimes this is an expression of political ideas. However, instrumental music is essentially abstract and non-verbal, so political and socio-cultural ideas appear mostly in descriptions of music, lyrics and in tune titles. The actual music is pure sound. The main thing is that musicians give voice to the way they feel, experience and think about the world through their music. As far as humor, today I saw a local news story about a bike thief in Southern Oregon who was captured because there was a cowboy in the parking lot with his horse trailer who got on his horse and roped the thief as he tried to ride away on the bike. I thought that was pretty funny. I was in Central America many years ago.  There are many beautiful places in Central America but it is very poor and people really struggle to make a living. It makes you realize how tough it can be to just get by in some places.

"My music is based strongly in the tradition of jazz and blues. Melody, rhythm and harmony are all very important to me."

For a musical time trip I would probably want to go back to the inception of bebop in 1945 or perhaps back to the late ‘20s when Louis Armstrong and Duke Ellington were emerging as major forces in the music. I’m definitely fascinated by the early historical periods in jazz. It was an entirely different world and the feeling and pace of life was very different. That’s why the music of those times sounds so different than anything today: it was a reflection of people’s lives in that time and place. It’s possible to play the same notes as musicians from the past but it’s not really possible to recreate the feeling they got because our lives are so different now and anything we play is going to reflect that.