"We feel that music can bridge the gap between races. It’s a Universal language that we all understand and can relate to, especially blues and soul. There’s something about blues music that seems to bring us all together with a deeper understanding of the human condition."

Stolen Hearts is a duo consisting of Carolina born Robert Johnson Jr. and Pam Taylor with their own individual approach to blues and roots music. Robert & Pam join forces and what you get is Dirty Southern Soul Music. Heart is the name of the game for these two lovers. Self-taught musicians, they have each poured their passion for blues and soul into a given talent that has been moving audiences of all ages in their powerhouse performances together as Stolen Hearts. Both raised in the Carolina's, the lives of Pam Taylor and Robert Johnson Jr. took a number of twist and turns, along with many ups and downs, before their musical paths crossed. Star struck, they quickly became each other’s biggest fans. Recently engaged, these award winning rock artists had successful individual careers before joining forces in 2014 to start creating even more musical magic. Their new album ‘Dirty Southern Soul’ (2015) is what they call it. It’s a jazzy kind of folk rock specially crafted to deliver the tales of these two musicians, who they are and how they came to be, with an honesty that inspires and heals. It’s undoubtedly their authentic connection with their fast growing numbers of fans that has sparked their popularity.                             Photo by Chris Austin Their touring escapades have been making a lot of noise on the road. Rock artists with heart; their vigorous and vibrant performances are winning over crowds as they take them on a journey of their lives through their unique sounds. Their song lyrics reveal that life hasn’t always been pretty. But it has certainly provided a lot of material for their on-stage living-room-style comedy routine where, like life itself, there’s always room for silly jokes even though sometimes things can get serious. Always embracing opportunities to connect with their fans – who they call their FRANS (combining their friends with fans) – Pam and Robert see their musical talents as a privilege, and seek opportunities to give back to their community in as many ways as possible. They both prioritize sharing their talents freely to raise money for various charities and benefits. Pam also participates in Girls Rock Charlotte, an empowering camp for young girls, helping them to find their voice, while having fun learning rock and roll skills.

What do you learn about yourself from the blues and soul culture what does the blues mean to you?

Pam: The blues showed me that I could actually FEEL music and turn feelings into music. It has been an incredible personal /musical journey that no other style of music can give. Blues, to me means that I no longer have to carry these feelings alone. It provides an outlet where my soul can sing.

How do you describe Stolen Hearts sound and songbook? What characterize band’s philosophy?

Pam: Dirty Southern Soul is how we describe our sound.

Robert: It’s really the only way to encompass it. We are influenced by all types of music and we express it all so uniquely that we had to make our own genre. All of our songs are true stories set to music. We want to keep important moments alive and timeless because either they portray an important life lesson or keep the memory of someone we love alive.  It’s all very personal to us. Our bands philosophy is to steal your own heart. It’s absolutely impossible to love unconditionally without having that love for your own self and we want to remind people of this. This is where the magic starts. 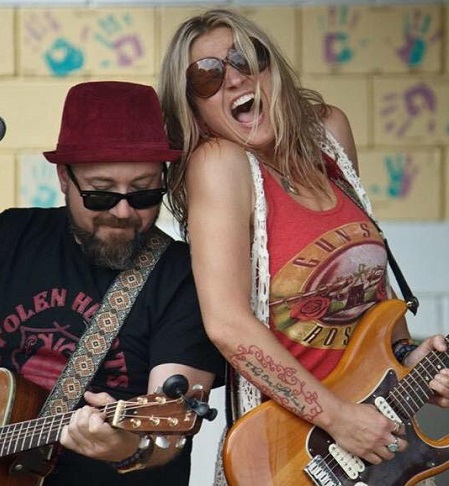 Pam: It all seems to be a happy accident, really and mainly because our music doesn’t fit into some box. The direction of our music took its own turn and we have just been trying to keep up. It is infecting people in such a way that it feels surreal sometimes.

Robert: We just play honest music that comes from our hearts and all the rest just kind of happened on its own.

Pam: Meeting each other has been the most important since we wouldn’t be here with our Dirty Southern Soul if we hadn’t met.  The combination of our influences has brought something totally unique magnified by our love for each other, the music and our FRANS. (Fan +Friends=FRANS).

Robert: The best advice given to us and that we want to pass along is "Stay True to YOU". No matter what happens in this music business if you keep that first and foremost you can’t go wrong. Don’t be trendy, be timeless.

Pam: I’ve had some pretty awesome memories all coming from the Legendary Rhythm & Blues Cruise. It’s a HUGE blues festival floating out on the high seas. It’s really what started it all for me. I met blues man Tommy Castro back in 2005 and he has been a huge influence in my music career. He encouraged me to follow my dream before I even knew it was my dream. Also, getting to jam with him along with so many artists on the cruise, such as Los Lobos, Trampled Under Foot, Deanna Bogart, Deborah Coleman, Debbie Davies (who was my mentor on guitar) and so many others.  All of these meetings stemmed from the cruise and I know this started it all for me.

Robert: I would have to say my first date with Pam ended up being one of the most memorable musical experiences for me. We squeezed in dinner right after her sound check for her Hot Mess CD release party. At the end of her show she opened up a jam and invited me up to sing Stormy Monday along with some my musical heroes, including Kofi Burbridge from Tedeschi Trucks Band sitting in with her on B-3, the legendary Jim Brock on drums and Mark Bumgarner, Jimmy Thackery's bass player. Thankfully it was videoed so I will never forget. It was the best first date ever. 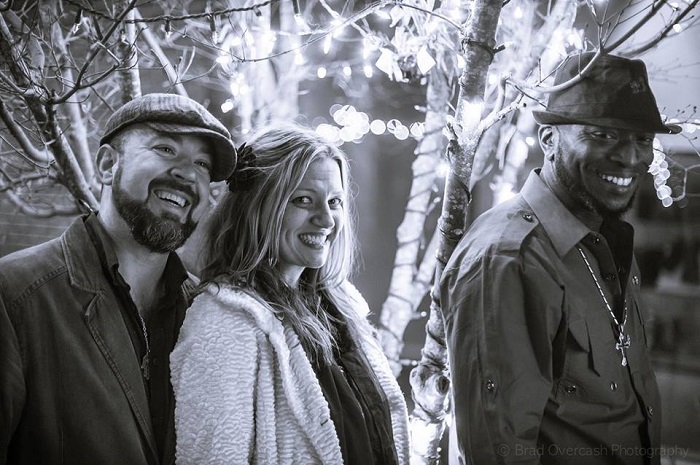 "We are all the same on the inside and blues music sends a vibration that gets to us all somehow. It’s a beautiful thing." (PHOTO: Stolen Hearts, by Brad Overcash)

Pam: Most of today’s mainstream music is missing soul.  It seems heartless and mechanical to me. I don’t even waste time listening to it. My hope is to bring the heart back to music and inspire more people to do the same. We network with other bands that we feel are on the same path as us and share and support them on their journey. Indie bands like us have the right idea and we want to start a movement where we all bring honesty and realness back to music. I believe the future of music is bright and I’m excited to be a part of it.  Times are changing.

Robert: I miss the raw and organic sound of music before technology came along. Musicians had to find creative ways to get the perfect tone like George Harrison slashing his speakers to get distortion. Now you can just buy a pedal, which is convenient, but those musicians were the ones creating the sound we all desire today. The good thing about the future of music is that it's more within our reach. Indie bands keep proving that you don't need record labels. The music is back where it needs to be, in the hands of the musicians and the fans, not big corporations.

Pam: Today’s female artists are proving to be musical trailblazers. More and more women are picking up instruments and playing them with authority. It’s exciting times for women in music. Music is not just a man’s world anymore. The festivals are headlining more female artists. I mean, who would you rather watch dancing around on stage? Lol GIRLS ROCK! 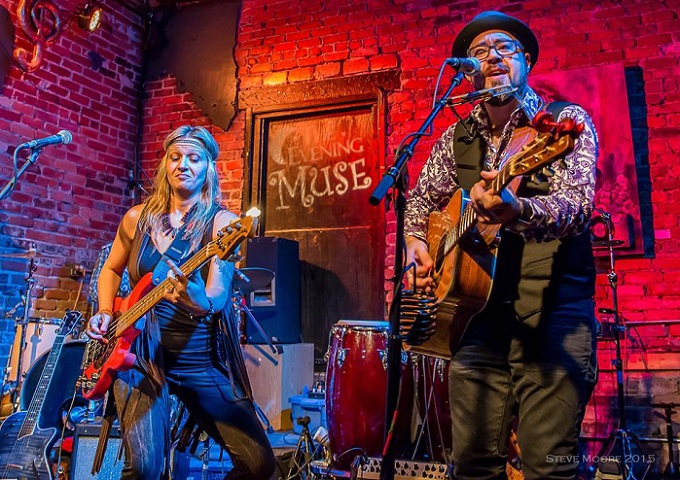 "Blues, to me means that I no longer have to carry these feelings alone. It provides an outlet where my soul can sing." (Photo by Steve Moore, 2015)

Make an account of the case of soul/blues in Carolina. What are the differences from the other local scenes?

Robert: In our local music scene there is a camaraderie between all genres.  But I'm not really an expert on any of it since the only scene I have time to be apart of is our own.

Pam: We feel that music can bridge the gap between races. It’s a Universal language that we all understand and can relate to, especially blues and soul. There’s something about blues music that seems to bring us all together with a deeper understanding of the human condition.

Robert: We are all the same on the inside and blues music sends a vibration that gets to us all somehow. It’s a beautiful thing.

Pam: If I had 3 days, it would have to be Woodstock! That was and still is for that matter, the most iconic event in music history.

Robert: I would choose the Monterey Pop Festival...front row to see Janis and Jimi before the world really knew who they were. Priceless. 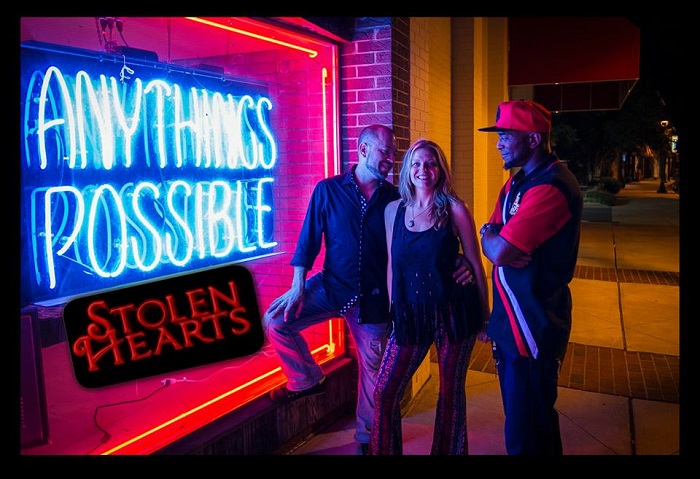