Q&A with Swedish singer/musician Stefan Berggren, well known to classic rock fans over the past decade

"I miss character and original sounds. Drum sound. Most of today bands sound the same. Don't be afraid to form a progressive rockbound and just listen to the sea or trees."

Swedish singer, guitarist & keyboard player Stefan Berggren has become well known to classic rock fans over the past decade through playing with original members of Whitesnake in Company Of Snakes and M3, and more recently teaming up with the legendary UK drummer Lee Kerslake, ex Uriah Heep, Ozzy, for various shows, and a new project The Berggren-Kerslake Band, their debut album The Sun Has Gone Hazy, released in 2014 (AOR Heaven Records). It is an excellent collection of classic rock and blues rock originals, showcasing Berggren’s bluesy vocals and guitar playing alongside Kerslake’s powerful drumming, and the pair’s songwriting collaborations which has produced a number of great rockers, and a few choice ballads. 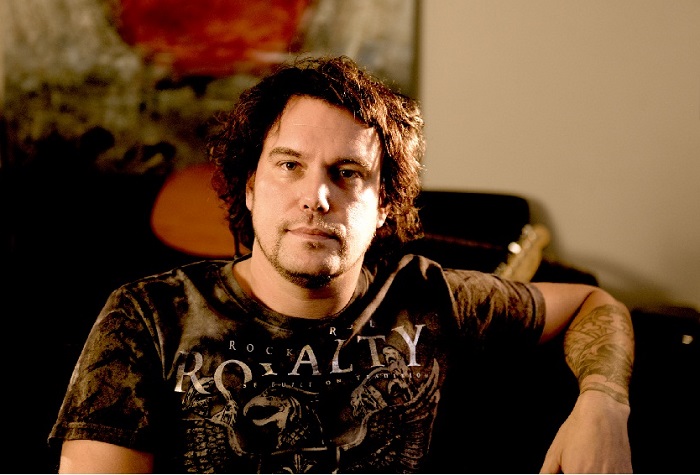 Stefan meet Lee for the first time 2005 in southern Germany. Where they make the Big Zeppelin Luft ships.The band's finesse is Stefan Berggren uses a guitar style that draws heavily on the blues with a unique understanding and love of a guitar sound without too much overdrive! Lee who has his own way of tuning drums to create he's unique drum sound. His Swingin' & energetic playing is heard on many successful albums that still echo across the world today. Then add Tomas Thorberg who plays bass in the same vain as Gary Thain & John Paul Jones but with his own twist. Haunting organic keyboards. The result is an incredible album with a wide range of songs from breath taken ballads to up tempo progressive hardrock tunes, bluesy stomping rockers and more dreaming sounding. Stefan Berggren & Lee Kerslakes unique voices and whom sings with soul, and with background vocals who plays in the same league as Queen and old Uriah Heep. These guys are rock history and aiming classic Rock album territory.

What do you learn about yourself from the Rock n’ Roll culture? And what does the blues mean to you?

Hold your ground and grow your own Rock n’ Roll character. It's the soul of a man or woman, it means freedom & expresses the feeling, you get from a special moment, when a child is born or if you can't pay the rent. It's just a snap shoot of a day from a day in our life.

How do you describe Stefan Berggren sound and songbook?

Bluesy & melodic!! Well my aunt is a Swedish folk music singer & my grandma was a piano player. When I was a kid I was interested in music & the bohemian life style. I really liked Elvis, Chuck Berry, the Beatles, Little Richards, and Even Robert Johnson. Cause I listen to my parents’ records. I thought it was cool thing to put on a vinyl. To me it was a little ceremony, you had to be careful not to scratch the LPs. I got really interested in the blues & Rock n roll. There was just something thing about the feeling in their voices & the swinging. And you could hear a lot of their life in the songs. That got me hooked. My first 2 songs I wrote was 12 bar blues acoustic. One fast and 1 slow. In the beginning of my career, I had to sing lots of different styles of music to be able to pay the bills.

Everything from AOR Metal, hard rock - big band Jazz, but I always put my bluesy stamp on the songs. I try to do new things and find new sounds that inspires me. Just bought myself a 6 string ukulele. It's very easy to carry around and give a great sound. I’m very impressed by it, the tuning is A-A. These days I work mostly with organic sounds. I use a Gibson j200 1954 & also a Martin d-18 from 1964. Which I write a lot on and use on my albums. There live many songs in those old acoustic guitars. They have a lot of over tones. For electric guitars I use mostly a Les Paul which I broke the neck on twice. Not me though, a drunken lady & a drummer in Helsinki (Finland). They didn't do it purpose. The weird thing is after the neck got broken, it started to sound even better. We glued it together. I also have Gibson 335 & and a fender no caster. Amps are Orange Rocker verb 100w. Fender Twin reverb 100w 1974. And a Marshall Super bass 1973 100w. They can be loud. Check out Berggren Kerslake Band's album "The Sun Has Gone Hazy", you can hear my stuff there. I play most of the instruments on that album. And are also the Producer. I hate drum machines and triggered drums and pod amps. There is no fire or energy in that sound. 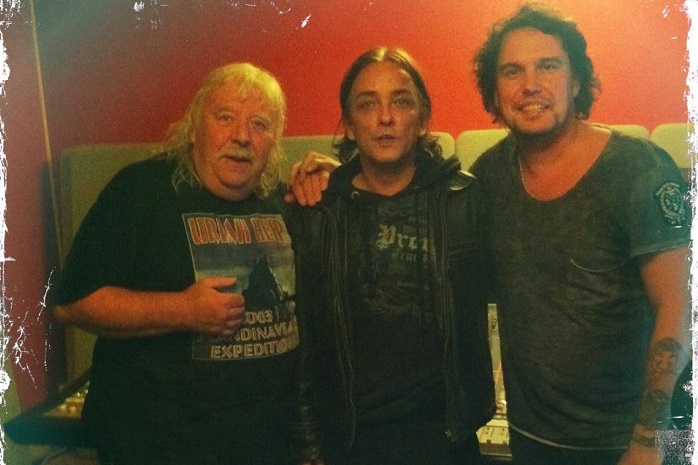 "Rock n roll brought down the barriers between black and white people. And also made the world a better place to live in. For me I wasn't very interested in school. Started out with football, ping pong, tennis." (PHOTO: Stefan Berggren with Lee Kerslake and Tomas Pomma Thorberg)

It has to swing groove and have a feeling that moves you. It doesn't need to be complicated. Keep it honest, cause it is your soul sounding and trademark. It don't mean a thing if it ain't got that swing. There's just something about that fraze and have as much fun as you can. The road is your life.

I meet a lot of strange characters. But guess I have to say Bernie Marsden, Neil Murray and Micky Moody. They really brought me back to Blues, and blues based hard rock, around 2000. I was writing pretty lousy pop songs at the time, just trying to make a living. I am glad they got me away from all that. They are fabulous musician and songwriters I learned a lot from them. It was a big step up from where I was at the time. Also meeting Lee Kerslake was a big thing. We clicked to together as persons. As soon as we started to play and write together, it was pure magic. Advice?? Hard to say. Stick to your dreams.

I miss character and original sounds. Drum sound. Most of today bands sound the same. Don't be afraid to form a progressive rockbound and just listen to the sea or trees. It does not need to be Radio friendly. I do miss quality of amps, guitars, pianos microphones from the past.

I do like the music industry now, I can be the producer and in control of my music. I even have my own TV channel on YouTube. Where I can put out my stuff. I always been ripped of anyway. My hopes is getting paid somehow for my work.          (PHOTO: Stefan with Corky Laing & Malcolm Bruce, by Jimmie Soini) 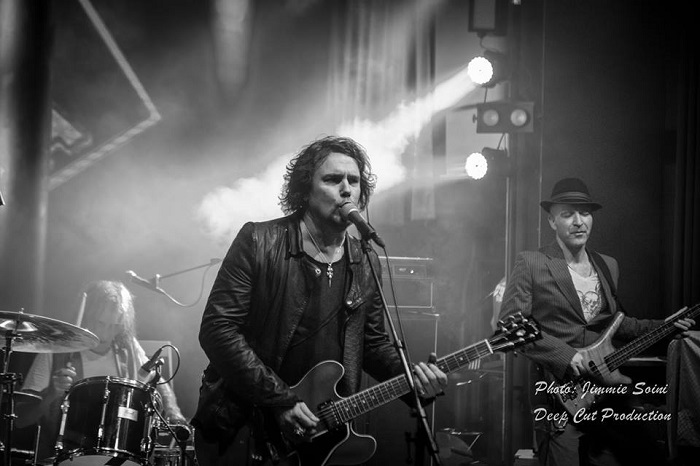 "It has to swing groove and have a feeling that moves you. It doesn't need to be complicated. Keep it honest Cause it is your soul sounding. & trademark. It don't mean a thing if it ain't got that swing. There's just something about that fraze & Have as much fun as you can. The road is your life."

Skip the drum machines and play everything live with a Band! Use no bullshit computers live. That’s fake. It’s like putting on a cd and mime.

What are the lines that connect the Blues with Rock n’ Roll and continue to Progressive and Classic Rock?

The groove and more chords!

Make an account of the case of Rock n’ Blues in Sweden. Which is the most interesting period in local scene?

70's and now, there are lots of great musicians and bands in Sweden right now. There is a Blues club in Stockholm called Akkurat. Every Sunday they have great Bands from all over the globe playing there. .It's also where many musician hangout on Sunday when their off touring.

What has made you laugh and what touched (emotionally) you from your stay in Rhodes in Greece?

I love it and really like the Greek people. They are very cool and takes it ‘moonjana’ (Greek gesture for bad luck). Cause it's very hot there during the day. I been to a couple of Greek parties they drink, dance & party a lot! Rhodes is just paradise on earth! Sunshine every day. We aren't used to that, we Vikings. We did 120 shows in 4 month in 1994. 2hour show a night in Rhodes town. It's still my world record playing. Been back twice since we played there...It's not the same though, still great, but when I was there the first time, it was very cheap (drachma’s days/old Greek currency), before the euro, I remember renting motorcycles without driver license. It was pretty wild, I used to pick up girls drive to Antony Quinn Bay or Lindos to impress them. Beautiful places for those who haven't been there. Worked every time, with no helmet of course, just the wind in your hair. Rhodes is very windy so you have to keep a steady steering…     (PHOTO: Stefan Berggren & Johnny Winter) "Hold your ground and grow your own Rock n’ Roll character. It's the soul of a man or woman, it means freedom & expresses the feeling, you get from a special moment, when a child is born or if you can't pay the rent. It's just a snap shoot of a day from a day in our life."

It came from Africa with the slaves to America. But it doesn't mean that white men can't have the blues. I think it belongs to whoever picks it up. Rock n roll brought down the barriers between black and white people. And also made the world a better place to live in. For me I wasn't very interested in school. Started out with football, ping pong, tennis. When I did my first gig at the age of 14 and got paid 50dollars, then I was hooked. I thought it was a cool way of making money. Musician are all guys with banjos in their hand. There’s nothing wrong with that. If you play that banjo long enough. It will take you places you never would have dreamed of..

Many Great times, beautiful women. Not enough space here though. I save those to my memoirs (Book).

Swinging London & Greenwich Village, New York in the 60-70's. Those decades where so full of interesting people and organic music. You could meet & jam with Stones, Jimi Hendrix, Cream, the Beatles the Who, Peter Green, Faces Bob Dylan, The Band, Mountain, BB King that could have been possible in those days…That would have been great!! I like jamming and meeting new musicians. That's My Life. 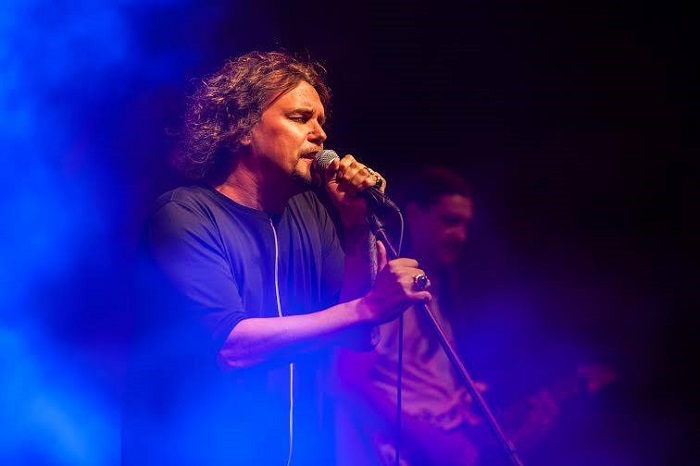