The Lysergics: Electric Music for Mind and Body

Taking their sound from 1967 psychedelia and the atmosphere of swinging London, the Lysergics are Fabio Mongelli on guitar, vocals and Sarah Gonputh on bass keyboard, organ and vocals. Influenced by early Pink Floyd, Cream, The Jimi Hendrix Experience, The Who, Small Faces and all the not as well-known psychedelic bands of the1960’s, the London based band was put together by Fabio Mongelli in 2007.   Photo by Jim Donnelly 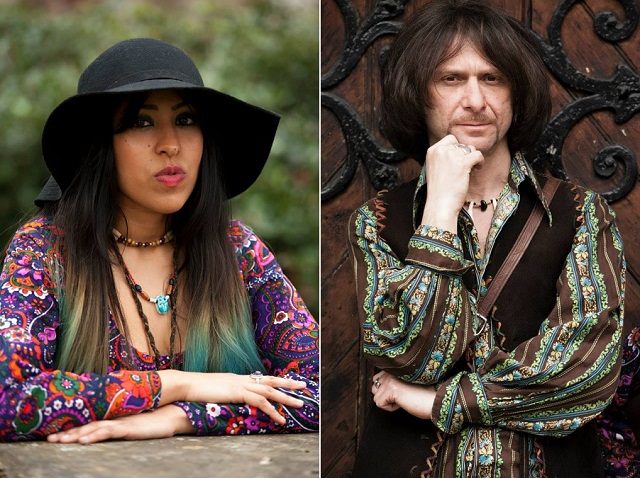 The Lysergics have performed at many well-known venues in London such as: the100 Club, the Borderline, the Dirty Water Club, the Monarch, the Camden Underworld, Big Red and have toured extensively abroad in Italy and Germany. The Lysergics have shared the stage with legendary and current acts on the alternative/ psychedelic rock scene such as: The Fuzztones, The Deviants, Vibravoid (Germany), Giobia (Italy), The Hangee V (Italy) and johnTWINKalder. The Lysergics' debut album was released in 2014 for digital download and the vinyl is out now on Clostridium Records, May 2015.  The recordings feature Eleonora Claps on drums and backing vocals.

What do you learn about yourself from the Rock n’ Roll culture and what does “Psychedelic” mean to you?

Fabio: I learn that Rock n' Roll keeps young and Psychedelic means love. Kidding! The two things are very different but sometimes they cross each other through Blues jams and improvisations. Rock n' Roll is music for the body, 3 minutes of energy, fun and it makes people dance. Psychedelia instead is music for the mind and for stoned people.

Sarah: As a classically trained pianist and violinist, when I first started playing in rock bands in my late teens it was such a release to be able to jam with other musicians, learn about how to improvise, not worry about notes on a page, write music and have fun with my friends. For me, psychedelic music is about going beyond the conventions of song writing – using dissonance, all twelve tones of the scale, eastern scales, noise, fuzz, improvisation, experimentation while aiming the keeping within the classic structures of rock n roll.

How do you describe The Lysergics sound and songbook? What characterize your music philosophy?

Fabio: We try to sound late 60’s, fuzz out, organ driven and far out! Our philosophy is to write our own music trying to be as much original as we can. We accept that everything has already been done though we refuse to rip other music off and at least credit if it happens. Our songbook is a blend of different genres all affiliated with the word FUZZ. 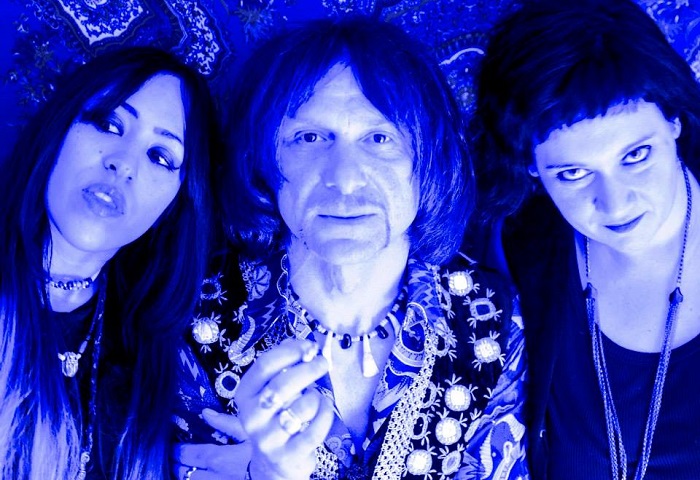 "Psychedelic music is about going beyond the conventions of song writing – using dissonance, all twelve tones of the scale, eastern scales, noise, fuzz, improvisation, experimentation while aiming the keeping within the classic structures of rock n roll." (The Lysergics: Sarah Gonputh, Fabio Mongelli & Eleonora Claps, Photo by Jim Donnelly)

Fabio: When I was a teenager I remember hating the fact that the music I was listening was from the past. I would have not believed that one day I could find myself having lunch with Michael Davis from MC5 or sharing the same room and jamming with Sky Saxon from The Seeds. I was lucky to jam and play with a lot of my youth idols as Rudi Protrudi, Jim Jones and Ray Hanson, Leighton Koizumi and TWINK. Last March I toured with the Lords Of Altamont. This show in Paris is particularly recommended.

Sarah: I really enjoyed our last tour of south Italy in December 2013. Fabio’s Italian friends, Danilo Villafranca and Max Marzocca, joined us on bass and drums for the tour. They did an amazing job of learning our set within just two rehearsals and we seemed to pull in larger audiences than we do in London. I also really enjoyed recording our album at Sausage Studio in London, which was produced by my partner Sebastian Kellig who I knew would do an excellent job for us. Sausage Studio is a dream, especially if you are a keyboard player or guitarist as you have access to all the analogue synths, vintage organs, amps and guitars of Nick McCarthy from Franz Ferdinand, who owns the studio.

Fabio: I definitely miss the sound. I don’t like the modern vision of music mainly based on drum and bass. I heard that the sound of live shows in the 60’s was very bad but at least you could play your amp full on!!!! I trust young people; the future is in their hands.

Sarah: I hate that mainstream music of today seems to have lost the soul and quality of music from the past. Everything sounds too digital and I much prefer the sound of analogue vinyl. I hate that the music industry seems to be run by business idiots who are more concerned about making profits than backing bands who actually are very creative and skillful musicians. We are stuck in this cycle of the industry bosses churning out rubbish and the youth of today, thinking that to make it in the commercial music industry you need to replicate what you hear on the radio or see on TV. However, I have faith that the youth of today are still as keen as ever to hear great music – in fact they are even more likely to with the internet – and boycott all the mainstream crap!      (The Lysergics: Sarah, Fabio & TWINK, Photo by Rokit) "Our philosophy is to write our own music trying to be as much original as we can. We accept that everything has already been done though we refuse to rip other music off and at least credit if it happens. Our songbook is a blend of different genres all affiliated with the word FUZZ."

Fabio: Definitely The Voice, England Got Talent. All those junk TV music shows and boy bands.

Sarah: I would ban the X factor and all those other TV shows that seem to promote the illusion that being a good karaoke singer will help you make it in the music business. There is far more talent and skill involved in working with other musicians to write songs in a band. Bob Dylan would not win the X Factor yet he is a legend and I love his voice. A song means more to me when it is sung by the person who wrote it themselves. It seems that being a pop star today is more about how you look and how well you can dance not about how well you write songs or play an instrument.

What were the reasons that made the 60s to be the center of Psychedelic Rock researches and experiments?

Sarah: Well there was so much change going on back then – counter culture movements, sexual revolution, civil rights movement, anti-war movements and of course people started taking hallucinogenic drugs. This all had a big effect on the music people made. There was a lot of musicians back then who took LSD to inspire them in their music (Syd Barret/Hendrix). It was a time when people started questioning conventions of society and started looking beyond, a kind of spiritual rebirth a bit like the renaissance period in classical music and art, I would argue.

What are the lines that connect the legacy of Blues with Rock n’ Roll and continue to Acid Rock and garage?

Sarah: I would say that all these styles have in common that they are wild and about protesting against oppression -whether political, or about the turmoil of the heart or about drinking too much and having no money or taking drugs. The music is soulful and comes from the heart. Of course the guitar is the main instrument that is the centerpiece for all these genres, whether acoustic as in early blues or electric as in the later styles. "I definitely miss the sound. I don’t like the modern vision of music mainly based on drum and bass. I heard that the sound of live shows in the 60’s was very bad but at least you could play your amp full on! I trust young people; the future is in their hands." (Fabio & Sarah, Photo by J. Donnelly)

Sarah: I don’t think it should matter at all whether you are a man or woman in rock, but I do feel this is still more of a male orientated industry. Most bands I have been in have mainly been with men and it’s only since joining the Lysergics that I got to work with a female musician – Eleonora Claps who played drums on our album. I also started playing in another band called the Magnetic Mind with a female singer– Ellie Foden. So it seems things are getting better though I hate it when I don’t seem to get treated the same way as the guys in the band. One time I turned up for a gig in London and the promoters didn’t believe I was in the band, despite I was carrying my Nord organ – they thought I was the girlfriend of one of the band members, trying to get in the club for free!

Fabio: The use of the term Psychedelic still makes me laugh these days. All the bands are psychedelic but very few sound like. I guess the word now embraces different kind of music but it has lost the original meaning. The same happened with the word R’n’R that is music from the 50’s. Rock is something else.

Fabio: Just one day? Well I would stay in the Swinging London hoping to catch Pink Floyd performing at the UFO Club to testify the magnificent of Syd Barrett.

Sarah: I would like to go to Woodstock 1969. Need I say why with a lineup of: Hendrix, The Band, Crosby, Stills, Nash and Young, The Grateful Dead, Credence Clearwater Revival…etc???