Q&A with Turkish music writer Cenk Akyol, one of the most interesting persons in Jazz and Blues scene of Istanbul

"I think all authentic local genres are similar to each other as they cover genuine, rural sentiments and feature one or two acoustic instruments. However urban it might be, Rebetiko is a case in point. Bozlak and Hoyrat forms in Turkish folk music should also be cited here."

Turkish music writer Cenk Akyol is one of the most interesting persons in Jazz and Blues scene in Istanbul. Cenk says: "I became more familiar with classic jazz and contemporary jazz thanks to my gig reviews and articles I have written from the Turkish jazz portal Cazkolik. I believe listening to different genres of music will make a person open minded." From 2012 to 2017, Cenk Akyol produced and presented a radio show named Terra Incognita featuring rock, blues and fusion bands outside the huge music market in Britain and the US.

What were the reasons that you started the Rock, Blues and Jazz music researches and experiments? First of all, let me thank you for your kind request for an interview. I am very pleased that you found my experience worth listening to. I believe what I will say in this interview will be very familiar for many music aficionados all over the world. Especially during last three decades culture has attained an immense global scale. Music industry reached every corner of the world and local music tendencies as well as mainstream Anglo-American pop music have become more and more accessible. Hence, living in an Internet age means these common musical tastes have become indispensable parts of our every day life, which is incomparable to two decades earlier. This is also due to peer-to-peer sharing, MP3s, streaming, torrents, and Spotify among others. You found me because of my interview with Mike Vernon I contacted via Facebook. This was unthinkable 25 years ago.

From 2012 to 2017 I produced and presented a radio show named Terra Incognita featuring rock, blues and fusion bands outside the huge music market in Britain and the US. My major resources were the blogs of other music enthusiasts. This is how I discovered the likes of Socrates and the PLJ Band just as I was introduced to amazing bands from the Eastern Bloc such as Modry Efekt, FSB, and Leb i Sol or those others from Greece, the Balkans, Africa, and Latin America. I also made many friends including from Athens or Thessaloniki. I visited them and they came to Istanbul to visit me. What’s more, I met numerous artists and bands in person. These encounters would only be miracles a few decades earlier. In a way, music shapes our lives and brings in nice people and occasions.

As a member of generation X, I witnessed the last epoch of rock, jazz and blues heroes in the 60s and 70s during their golden era. I began listening rock music and collecting albums when I was thirteen. My interest in rock began particularly in the heyday of the Queen when they released the Works in 1984 I have collected all Queen albums after Radio Gaga and I Want to Break Free hit the world charts. I was watching Led Zeppelin, Santana in Live Aid on TV real time in 1985 and they were like online courses for me at the time. The state TV channel in Turkey used to broadcast amazing concerts. I can never forget watching Simon & Garfunkel’s gig in central Park, Jethro Tull’s gig in Madison Square Garden, and the documentary The Last Waltz by Martin Scorsese. I became a devoted rock enthusiast after I listened to Studio FM (a radio show) on the state channel TRT 3 and short TV episodes of its producer Yavuz Aydar and radio and TV show Teleskop by Izzet Oz featuring rock music.

At that time the cassette era was dawning and the vinyl records were disappearing. Many music stores used to bring new and classic albums from abroad by the help of diplomats, air stewards and truck drivers and copy them on cassettes and sell in their stores. As we did nor have any copyright laws back then, cassettes and Betamax videos were easily available. This is how I watched the gigs of Kiss, Accept, Iron Maiden, Judas Priest, Venom, and Deep Purple. I devoured many milestone albums including Eagles, Supertramp, Traffic, Deep Purple, Led Zeppelin, Rush in a very short period. Those were so exciting times for me as a young music fanatic. I have never caught same feelings later in my life.

The first concert I went to was that of Al Di Meola in 1987. During those years in my life, it was important to watch the concerts in the front rows. I became impressed by the mastery of the musicians. I was dragged naturally into blues music. I was inclined to hear British blues rock artists such as Robin Trower, Eric Clapton, Ten Years After, Fleetwood Mac, and Keef Hartley Band. I have never been a genuine and purist blues enthusiast though. I focused more on progressive rock for a certain period and on fusion and jazz-rock for another period in my life. However, classic rock has always been the main spring of my music indulgence. A few days ago I came across a quotation from Craig Erickson, an aritist of American label Grooveyards recording retro blues rock bands. He says “Blues is a vibration which serves to transcend the borders of race, language, religion, generation, gender and level of income”. This is true for almost all forms of art. Blues can easily achieve this due to its structure based on simple patterns, endless ways of improvisation and the passion of its major instrument guitar particularly electric guitar. As a matter of fact, I listen to jazz rock when I am looking for something more sophisticated. I favour jazz rock and fusion rather than blues. These two genres are in constant interaction. I am neither a jazz nor blues person. I am a kind of person who scrambles even when eating.

I became more familiar with classic jazz and contemporary jazz thanks to my gig reviews and articles I have written from the Turkish jazz portal Cazkolik. I believe listening to different genres of music will make a person open minded.

I think nostalgia is the common ground for blues, jazz and rock enthusiasts. Most of them are missing and searching for old glory days, albums, concerts, bands; a kind of Valhalla or Neverland where people glorify the past and despise the present. I used to be one of them when I was younger. I am still searching for hidden gems on the web, reading interviews, critics from other fans' blogs. But glorifying some specific styles and periods is now weird for me. For example most of old music lovers believe 67-74 was heaven for rock music. It means being narrow minded to say the least. These days many good bands are dissolving because of lack of interest. It’s a problem free from specific periods or style. Many bands which are worthy of appreciation are lagging behind awful bands because of poor promotion and bad management.

It's a fact today that making music seriously and being a music enthusiast is not popular among today's youth. Music players and enthusiasts are not increasing as fast as total population. On the contrary, they are becoming a minority year after year. 25 years ago Istanbul enjoyed three or four times as many places for live music as it does today. Newspapers used to organise nationwide talent shows among high school students. However today TV shows feature cheap shows and lousy characters. It is difficult to find large audiences for quality work done by a handful of people. Summer festivals around the world are still relying on artists in their 70s. The last major band is U2 I guess. Or maybe Coldplay. The former is 40 and the latter is 20 years old. The new generation is attracted by DJ shows rather than bands of their peers. It is an undeniable fact that young and talented artists really into the music as an enthusiast or profession is getting meagre.

As for my fears, I should talk more at the level and political level. Turkey has lost tremendously during the last 20 or 25 years. The government in power for the last 20 years who defines itself as conservative, national and authentic is actually incompetent and presents a monadic and churlish understanding of art as in the case of all other areas in the country. TV and radio channels are replete with cheap music, replica series and entertainment shows for the large crowd. The mainstream media is owned by the supporters of the party in power and inject a conservative culture to the society. It is not possible to see or hear a form of opposing view. When I visited Greece, I mainly saw church masses on TVs on Sunday mornings. Yet, you still have more alternative voices in Greece and they are not marginalised whereas in Turkey we have a dark era of tyranny. This will surely not go on forever. The Pandora’s box has been opened. 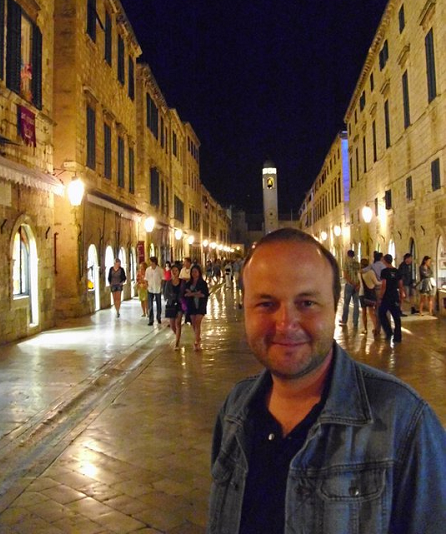 Blues or more correctly blues-rock has been around and popular since the 90s. Many cover bands have popular blues-rock tunes in their repertories. Yet we don’t see many bands associated purely with blues. In the 90s some bands like D-100, Istanbul Blues Kumpanyası, and Moe Joe managed to release albums. Nowadays we have quite a few bands around. Fötr Blues Band, Tuncer Tunceli Band, The Cork, Bluesaint, and Sahte Rakı to name a few. One can come across live blues shows in major cities such as Ankara and Smyrna or in university towns like Eskişehir and Edirne.

Istanbul has seen a revival in terms of live venues recently. Ağaç Ev and Kum Saati in Kadikoy  are dedicated to blues bands and shows. Last summer blues enthusiasts founded an association.

I think all authentic local genres are similar to each other as they cover genuine, rural sentiments and feature one or two acoustic instruments. However urban it might be, Rebetiko is a case in point. Bozlak and Hoyrat forms in Turkish folk music should also be cited here.