Q&A with venerable musician Smoky Greenwell - has been working steadily for decades in blues, jazz, and other Louisiana genres

"Blues has multiple meanings. As a music art form, it has a basic, identifiable structure which my ear recognizes. Blues music for me has been a lifelong passion---to develop my style and chops."

Smoky Greenwell was born in Michigan on the 4th of July 1951, reared in Delaware, and schooled in Spain and Tennessee. Greenwell learned harmonica in earnest in the mid-1970's by sitting in with the venerable blues masters Furry Lewis, Piano Red and Mose Vincent. Greenwell's career as a first-call sessions player began at Sam Phillips' Sun Studios and led him to take up residence in Nashville in the '80's. Greenwell came to national attention in the band Blues Co-Op (with Allman Brothers guitarist Warren Haynes). It was in Nashville that Greenwell began a long association with Allman Brothers keyboardist, singer and producer Johnny Neel, a partnership that continues to this day. 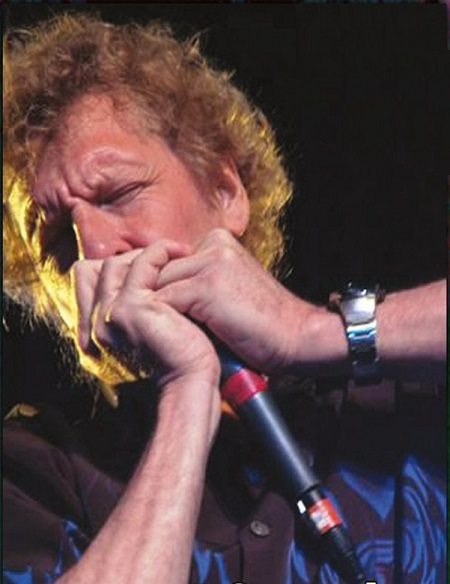 Greenwell came to New Orleans in 1981 for an engagement at the now legendary (and defunct) Old Absinthe Bar and decided to stay. Since that time, he has shared stages with Snooks Eaglin, Marc Adams, Eddie Bo, "Big" Al Carson, Brint Anderson, Jumpin' Johnny Sansone, Coco Robicheaux, Willie Lockett, Bruce "Sunpie" Barnes, Kipori "Baby Wolf" Woods, Bryan Lee, Timothea, Walter "Wolfman" Washington, George Porter, Jr., Waylon Thibodeaux, Rockin' Dopsie, Jr., Chubby Carrier, Blue Floyd, Mother Blues, Lenny McDaniel, Jimmy Page, Eugene Carrier, and many others in the areas of blues, jazz, Cajun, Zydeco, funk, and country. In addition to fronting his own band, Greenwell is best known as the replacement for Lee Oskar in the seminal band WAR with Harold Brown, BB Dickerson, and Howard Scott. Greenwell wrote and produced a popular harmonica course in 1984. Smoky's Beginning Harmonica Course has sold approximately 22, 000 copies and is used in schools as well as by individuals. Greenwell is frequently sought out by blues harmonica aficionados seeking private lessons. Greenwell spends his time in New Orleans while not on the road. Greenwell’s new album “South Louisiana Blues” (2016) is the result of some fortuitous circumstances among Smoky Greenwell’s band members, all of whom have been working steadily in the New Orleans for decades in blues, jazz, and other Louisiana genres. Smoky’s bands produce a special chemistry that has been noted by writers and reviewers throughout his forty year career here. Appropriately, the players on this recording include some of the top tier of New Orleans’ mucicians: Jack Kolb, David Hyde, Doug Belote, Wilie Pankar, Joe Krown, Johnny Neel, Pete Bradish, and Lynn Drury. All of these songs were written by south Louisiana songwriters.

What do you learn about yourself from the blues music and culture?  What does the blues mean to you?

I have learned that I have something to say that interests people, whether it is on my harmonica, sax, or lyrics from a song. This probably comes from steeping myself in the lifestyle that characterizes the blues culture in Memphis, Nashville, and New Orleans. I have spent my long adult life in these three places. All three have things in common: accessible music played live, which is very important; something of a laissez-faire attitude toward day-to-day living; and the necessity of art. I can’t even go into that. Blues has multiple meanings. As a music art form, it has a basic, identifiable structure which my ear recognizes. Blues music for me has been a lifelong passion---to develop my style and chops.

How you describe Smoky Greenwell sound and songbook?  What characterizes your music philosophy?

My first four CDs were totally instrumental blues with some jazz and rock influences. With my Smokin’ Christmas CD, vocals and lyrics started to become an integral part of my music. My sound has changed and grown over the years, but a strong, forward, no-holes-barred high energy is always in place. Over the course of eleven CDs and twenty-plus years, my writing and playing have undergone a shift of sorts, in terms of efficiency and economy. Looking back and listening to the entire body of work, I can see an evolution from each release to the next that incorporated more and more of the environment in which it was created, in terms of musicality, spirituality, and location. My musical philosophy is expressed within these parameters. Additionally, the inspiration to write a piece of music with lyrics comes to me when I have something to say. 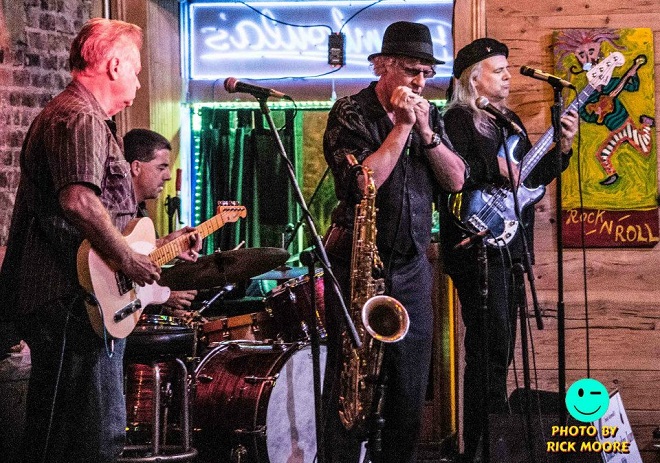 "I have learned that I have something to say that interests people, whether it is on my harmonica, sax, or lyrics from a song. This probably comes from steeping myself in the lifestyle that characterizes the blues culture in Memphis, Nashville, and New Orleans."

Why do you think that the South Louisiana music continues to generate such a devoted following?

It seems amazing sometimes. South Louisiana has an embarrassment of riches in terms of its indigenous music. New Orleans, of course, is the birthplace of jazz of all types. Art Blakey’s definition of jazz is “the blend of African rhythms and European harmonies.” And it happened here. The blues originated in mid-Mississippi. Blues musicians wanting to record often headed to the nearest big city, which for many years was New Orleans. The influence of blues on jazz of that era is evident in those early recordings. Blues also shows up in the development of zydeco in southwest and south central Louisiana. It grew out of Cajun music, brought by the Acadiens expelled from Canada in 1755. Early zydeco was sung in French, and was termed “la-la music.” Zydeco is a blend of traditional Cajun music, black Gospel music---and blues.

All of these musics – and more – have a very devoted following outside of Louisiana. First, one of the principal industries of Louisiana is tourism and hospitality. People have been coming down in droves for decades now to attend all kinds of Louisiana music festivals – blues, jazz, Mardi Gras, Cajun, zydeco, swamp pop - the list is enormous. Also, the cuisine of South Louisiana goes hand-in-hand with the music. Second, the music is accessible. People play on the street. Artists sell their CDs off the stage. Tourists go home and listen to the music on the internet.  And lastly, it’s a roots area.  The enormous record labels that record, release and promote mainstream music don’t affect us. We fly under the radar. And people love it, it speaks to them, it speaks to the heart. There’s something here in South Louisiana for everybody. And it’s good. In short, there’s no other place like it.

What are the lines that connect the legacy of Louisiana music from Blues to Jazz and from Caribbean to Latin music?

That’s an enormous question! Historically, the people playing the music have constituted the line itself. Primarily, the lines developed from a lot of people playing music and rubbing shoulders in a port city that is fertile territory for artists of all types, and laying an influence on each other’s music. It shows in the history of the city. It still does today. Whatever’s out there is absorbed in some way. Nothing happens in a vacuum. The blues-jazz connections were described in an earlier question, I think. As far as Caribbean to Latin, I can’t really address that.

Which acquaintances have given you the most important experiences? 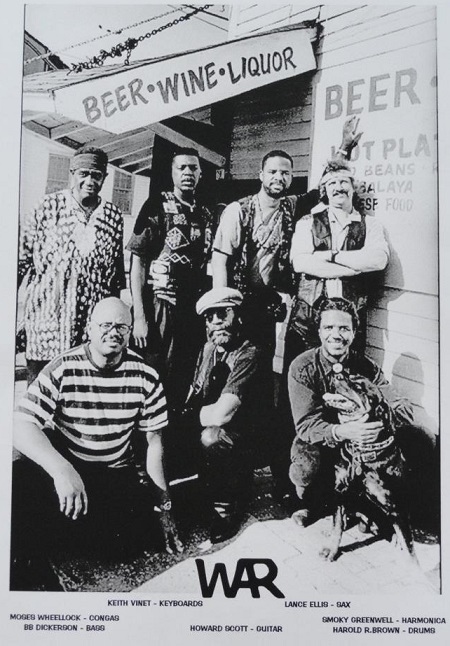 I have been fortunate to have many mentors, such as Johnny Neel, who produced much of my early work, and Warren Haines, with whom I played for three years in a band called Blues Co-Op. I have learned a lot from Jack Kolb and David Hyde from my current band. Harold Brown from WAR was a mentor in many ways when I was filling in for Lee Oscar. Kateri Yager Laborde has been the go-to resource for Louisiana roots music and has been a practical help.

"I hope to continue to be successful in my music career, as the world of music and media change."

The best advice I ever got was the same advice I would give to a budding artist: Keep performing, and follow your heart. There’s a gulf of difference between someone saying “I want to be a blues musician” to “I play blues,” whether they perform for an audience or not.

The guys in WAR, particularly Harold Brown, BB Dickerson, Howard Scott, and Lee Oscar---these guys have given me experiences I’ll never forget. One night at the Old Absinthe House on Bourbon Street we had Jimmy Page sit in. The great part of playing New Orleans gigs, especially on Bourbon Street, is that you never know who’s going to walk in the door. Recently, I played a wonderful gig at the Saenger Theatre with Warren Haines, Bob Margolin, and Michael MacDonald for the Last Waltz tribute to The Band. There were also a good number of New Orleans musicians on the ticket, such as Cyril and Ivan Neville, and Matt Perrine with a smoking New Orleans horn section.  It was one of those nights that stay with you forever.

There were real bands that played together for years, and were dedicated to that band. These days, band members play with multiple bands, and there is less consistency and chemistry in the music as a result. I hope to continue to be successful in my music career, as the world of music and media change. As far as fears go, I don’t have any fears. I think it’s a bad idea to subscribe to fear.

What has been the hardest obstacle for you to overcome as a person and as an artist, and has this helped you to become a better blues musician?

Probably, in the early days, getting over my shyness was the biggest obstacle. As an artist, you can either grow or hide. You can’t do both. It comes with experience. All you can do for that is to get up there and play, period.

What is the impact of Blues and Jazz music and culture to the racial, political, and socio-cultural implications? There’s not a simplistic answer to any part of this question! Not sure, but I like to think about music and culture having influences on society, and making inroads to progressive ideas or action. Two of my best songs grew out of the political circumstances of that time, and became title cuts of two of my CDs. Between Iraq and a Hard Place was political in terms of the war, but also political in terms of the aftermath of Hurricane Katrina. 99% Blues was an answer to the Citizens United decision. The song later became an anthem for the Occupy movement in New York and Philadelphia. There are music videos of both songs on YouTube.

Let’s take a trip with a time machine. Where and why would you really want to go for a whole day?

In the blues world, I would like to go back to meet Little Walter when he played with Muddy Waters. Past that, I’d really like to see some dinosaurs in the wild.