"I think that back in the 60s Rock n’ Blues music was uniting people massively. White British boys were playing African music and they spread it all over the rest of the earth."

David M’ore arrived to L.A in the early 90’s committed to alter the musical scene. Club goers and musicians begin to talk about the new kid with the virtuoso aggressive guitar style, raspy vocals, and his high energy fueled Blues-Rock tunes. David M’ore managed to take his guitar pyrotechnics to a different level of instrumental majesty. Performing on a custom made Strat carefully modified to his specs, M’ore demonstrates his acclaimed six string technique on both originals and cover tunes. “I love to pay tribute to those who influenced me. But at the same time I like to be true to who I am,” says M’ore, whose influences include Hendrix, Blackmore, Satriani, Johnny Winter, Gary Moore, Albert King, and other guitar monsters. From the beginning, traditional Blues and British Neoclassical Hard Rock played a very important role in the evolution of David M’ore style. 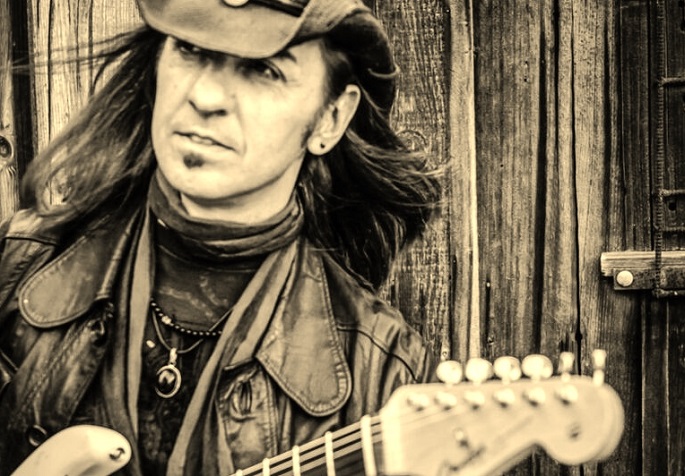 Born in Argentina, he picked up an old guitar that his godfather bought him for his eighth birthday and immediately began to explore vintage records. “The aggressive sound of the guitar drove me emotionally insane,” David says. “I still listen to those old records from Johnny Winter. That’s where it all began." A born troubadour, Mr. M’ore moved frequently around the world as well as in the U.S.A before finally settling in Hollywood in 1990. After the separation of his band “Blind Hole” and refusing to accept the change of the grunge movement, he escaped to Sacramento in 1993 where he obtained a music award. If you're a fan of excellent guitar playing, enjoy hard rock that strays towards the blues rather than heavy metal, then you'll cherish David M'ore's expressive and explosive guitar attack. David gives plenty of workout to his vibrato bar, and wah-wah with excellent results. If you are looking for Passion, Blood, and Fire you must check M’ore’s high-octane blues rock shines on his new album, “Passion, Soul, & Fire” (2015), Don’t miss it!

Rock and Roll it was a force that helped me to go through good times and bad times in live. It was a way to express and exteriorize the most hidden feelings inside of me. It was the protein that I needed to survive. A force not doubts. It’s not just music to me…it is a way of life especially when I was a teenager. It was the music that changed a generation and the whole world with-it. Once it gets into your blood you can’t get it out.

The Blues is an expression of the heart. If you can’t feel it you can’t play it. Blues is The Root of all contemporary music styles. It’s so transparent that there are not two people in this planet that can play the Blues the same way. Even if someone tries to imitate another musician it is impossible to play it with the same feeling. Every soul is different. That’s why I always search for my own tone. I am searching my soul.

How do you describe David M’ore sound and songbook? What characterize your music philosophy?

Analog Vintage Wild Raw High Energy Blues Rock straight to your heart baby! Practice as much as you can. Always do the best you can on the records and at ALL life performances. If I play a small venue or a TV show for hundreds of thousands of viewers I always play with the same integrity and passion. Live for it! Work with all your Passion Soul and Fire! "I hope that the next generation respects the Blues and Blues Rock as I do today. My fear is that is getting harder and harder to finance records and tours. Everyone wants everything for free. It’s time to talk about LOVE."

Johnny Winter told me to always play the music that I feel and not to bounce from one style to another. He said if you like Blues play Blues and If you like something else play that but be consistently working on developing your career by walking on the same direction. I always remember that.

I am afraid to do so LOL!!!! I play a lot of gigs and they are all special to me but it is one night that I never forget. 8 Years ago I was playing in a well-known venue in San Francisco and after the first set was over a girl came back stage and asked if she could spend some time with us backstage. Suddenly after we say yes she started to perform a strip dance for my bass player and I. She was the beautiful and sexy…the devil’s daughter…and we could not keep her far enough from us. We had a lot of fun during that break. After the break was over we went back to the stage and right before we started to play a young gentleman came to me and asked me if I could do something really special for him. I asked what it was and he said…I want to ask my girlfriend to married me tonight and I would like to do it on your next set. Can you allow me to do it on the stage? I said…yes it’s not a problem with that…I play one song and then I call you and your

I said…who is the girl? And then the guy turned around and said…that one…and he pointed the same girl that was backstage with us 10 minutes before. I turned my head to look at my bass player and he was as shocked as I was. At first we didn’t know what to do but we needed to keep playing so we let the guy do it. I never forget when he pulled a BIG diamond ring. It was funny at first but we were sad about the guy. After he got out of the stage we finished the show and I never sought them again. I will never forget that! 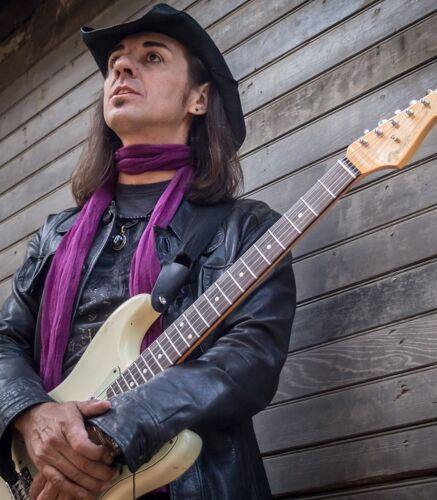 Everything! Back in 1990 I was living in Hollywood and we were playing rock and blues venues every night. Metal, Hard Rock, Blues and Blues Rock were dominating the charts. If we were not playing someone else was playing and you could go to see them and have fun. I also miss the records sales, the interactions of more people attending the rock concerts. The most important is that music it was about the musicianship and the player’s technique. Now is about a guy and a computer. Nobody plays an instrument or practice. I used to practice all day trying to be like my heroes. The sound on the 2 inches tape recorders was incredible and warm. It was handmade music. I still keep it that way. I love Marshall and Fender amplifiers, old Strats and loud riffs. I don’t care what everybody else does now. Robert Johnson never recorded on a computer LOL! I continue recording my music on a mixing board from 1973 pre owned by Pete Townsend of The Who. He recorded the album Quadrophenia using the same board.

I hope that the next generation respects the Blues and Blues Rock as I do today. My fear is that is getting harder and harder to finance records and tours. Everyone wants everything for free. It’s time to talk about LOVE.

I would trade greed for love to the music. I would bring back Vinyl LPs and teach the kids to respect the time and effort that takes to be a good player.  I would teach them the difference between music as a human expression and a soulless computer generated beat without feeling.

What are the lines that connect the legacy of Rock n’ Roll with Blues and continue to Winter, Hendrix and Moore? 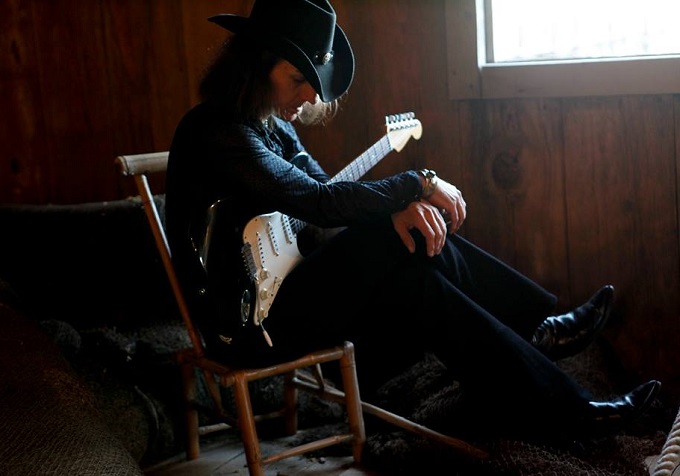 "The Blues is an expression of the heart. If you can’t feel it you can’t play it. Blues is The Root of all contemporary music styles. It’s so transparent that there are not two people in this planet that can play the Blues the same way."

Jon Lord and Johnny Winter are dead. I cried for both of them. They were both a big part of my life even if I meet Jonny Winter at The Fillmore in San Francisco but I never had a chance to meet Jon Lord in Person.

I think that back in the 60s Rock n’ Blues music was uniting people massively. White British boys were playing African music and they spread it all over the rest of the earth.

Woodstock in 1968!  I would do anything to see Alvin Lee playing that amazing version of “I go home”. Hendrix, Joe Cocker, and The Who! Johnny Winter with Tommy Shannon on bass! All on the same stage??? I want to be there! 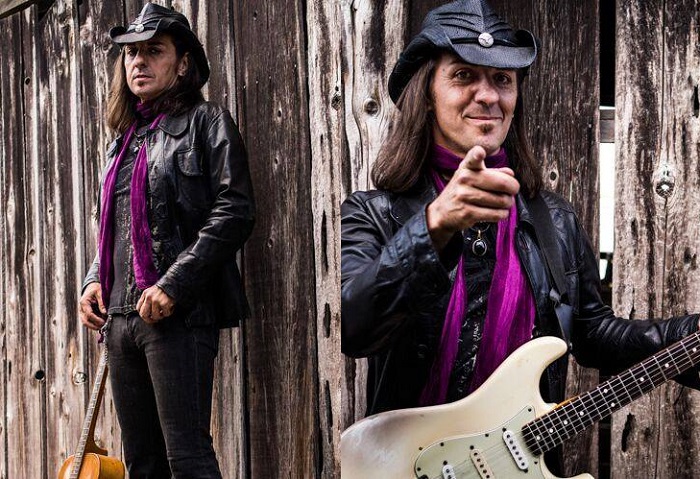