Q&A with Martha High, one of the hardest working ladies in show business, sings about love and happiness

"Blues is a feeling, that comes from within. That’s why most blues singers sing with there eyes closed. Most lyrics are written about what they are going through or how they feel about life. It sometimes be sad or sometimes happy feelings."

Martha High: The Soul of Happiness

Ladies and gentlemen, presenting you Miss Martha High, one of the "hardest working ladies in show business,” who sung background vocals at some of the most notable performances by The Godfather of Soul, James Brown. Martha High (born Martha Harvin, Victoria, Virginia) is an American female vocalist. Harvin grew up in Washington, D.C., attending Roosevelt High School and singing in Trinity AME Zion Church. She began singing in The Four Jewels (whose members attended the same church and school) after the departure of Carrie Mingo. After Martha joined the group, they changed their name simply to The Jewels and released their best-known hit, "Opportunity". After a follow-up single, "But I Do" b/w "Smokey Joe", flopped, they were dropped from Dimension Records.                                      Martha High / Photo by Philippe Lévy-Stab The Jewels went on tour with James Brown in 1964, with a demanding nightly schedule. They visited the studios of Motown Records on the Detroit leg of the tour, hoping to record, but the building was closed that day. They did record two singles while they toured with Brown, but after a year and a half with Brown the group split up. Harvin adopted the stage name Martha High and continued singing with Brown for the next 30-plus years. Among her appearances with Brown are on the track "Summertime" and on the Original Funky Divas album. High also recorded a self-titled disco album in 1979, released on Salsoul Records. In January 2000, she stopped performing with Brown and went on tour with Maceo Parker. In 2004, High teamed up with the Soulpower organization, which is also behind the comebacks of Soul artists like Marva Whitney, Lyn Collins, Bobby Byrd, Gwen McCrae and RAMP. During her collaboration with Soulpower, High performed all across Europe and even performed in Africa, backed by the Soulpower Allstars. In February 2005, High embarked on the "James Brown's Funky Divas Tour" in Europe, sharing the stage with her friend Lyn Collins. In 2016, High released her solo album "Singing For The Good Times" on Blind Faith Records (Greece distribution by Heathen Natives), 11 original tunes produced and recorded by Italian soul man Luca Sapio and his crew. Martha’s book "He's a Funny Cat Ms. High: My 32 Years Singing With James Brown" (2017), takes us behind the scenes; life on and off stage, performing with The Jewels, The Flames, The Bittersweets and the JB’s before starting her incredible solo career still performing all over the world! These stories are told in her unique style with compassion, humor and above all with truth!

What do you learn about yourself from the music industry and show business?

I learned how important it is to be honest of how you feel about, where you want to go with this. You must set goals with each project and how you’re gonna accomplish what you want. It’s not easy but keep your mind focused on making your music happen and give your all, when you present your music to the public and in concert.

How do you describe Martha High sound and songbook?

My songs are mostly about love and happiness. I’m most of the time, in good moods, so I like to sing about positiveness and feel good inside about yourself.  I want to share my love for music. That's what I want my sound to make you feel what I feel. Martha High’s music is happy, bluesy, fun and soulful. I believe in …

What characterize your music philosophy and mission?

Joy, love…enjoy what you hear, whereas you play one of my songs, when you’re cleaning your house, play it when you have something or some one on your mind, etc., the songs were written in mind of music soothing the souls. Remember love, is the key for getting along.

How has the R&B & Soul music and culture influenced your views of the world and the journeys you’ve taken?

Some of the music of today, has no influence on me. Some of it has no lasting power for years and years afterwards because the lyrics have no meanings, like the old school music. There is a big difference in the music. So I keep telling myself, keep the music alive and real, give them the sounds that got me this far., IT’S needed this generation needs to know where the funk & soul really started from and that’s from my era. 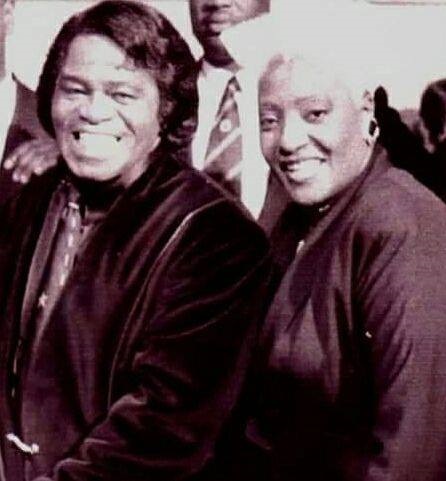 When Mr. Brown, calmed the nearly riot in Boston. I saw a black man, quiet the storm and what he meant to our people. They gave him the respect for what we all been fighting for, our dignity and our respect for a man that had fought for our freedom, Dr. Martin Luther King.

When you go on the stage to perform, if there is only three, four or just ten people in the audience…, I want you to perform as if you had 10,000 people out there every time! (Quoted by,” the Godfather of Soul “)

Why do you think that the James Brown music continues to generate such a devoted following?

His music is magical, good listening, best dance music, funky, it puts the pep in your step, every song, people can tell you what they were doing when it came out., he created the funk, His rhythm; his funky drum beats, whichever ever song you play these days still sounds like something you never heard, people can’t help moving to the music!

There are some young singers are realizing that their messages can be appreciated when it saying something. There’s music out there these days that has no meaning and just not going anywhere! I hope they can give meaning to their songs and their children would be proud to repeat in the future, what the have done now.

Recording with a live band and not just person…, it’s better, a real band puts out energy and the singers can get a better feel and they would sing with more feelings.

Are there any memories from Little Richard, Patti LaBelle, and B.B. King, which you’d like to share with us?

When I did the, “The Legends of Rock & Roll Show“, with Mr. Brown, and Little Richard, was doing his thing, he got tired and told the audience it was time to go home…, well, I joined in and sang behind him, repeating the words ,bye, bye, bye and he looked at me, and sang, “that’s right”, winked his eye and it seems lime they turned my mic. Up and you could here me saying bye bye, loud and clear …We performed at the, “The Tribute to Richard Pryor Concert.” Patti La Belle, told me, ”Ooh my, you have a beautiful voice“! I was so honored, I must have kept a smile on my face for a week! 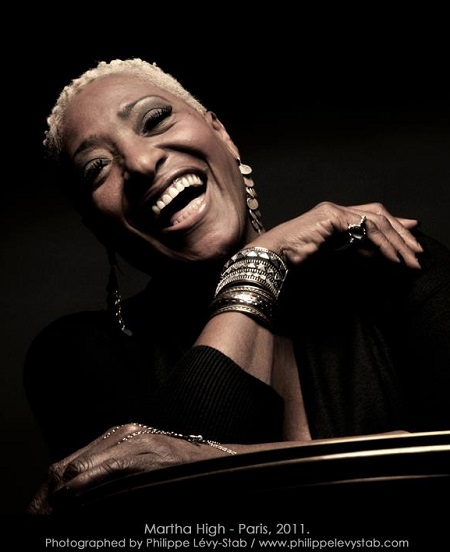 Blues is a feeling, that comes from within. That’s why most blues singers sing with there eyes closed. Most lyrics are written about what they are going through or how they feel about life. It sometimes be sad or sometimes happy feelings.

"Martha High’s music is happy, bluesy, fun and soulful. I believe in …"  (Photo by Philippe Lévy-Stab)

What is the impact of Blues and Soul music on the racial, political and socio-cultural implications?

All the above is still powerful, it still brings together all races, you’d be surprised of who is doing our music, why are the different races playing our music because they know it’s from the soul and they are feeling it.

Go into a Forrest where there are no animals, so I won't be afraid and know people, so I wouldn't  have explain, why I want to sing out loud and hear the echoes of my voice, maybe, reach as high as an eagle can fly…