"Music is very powerful and can unite people together. Music can reach out to many movements and make a real impact."

Originally from the Detroit area, Dana Robbins now calls Nashville home after a seven year stint in Los Angeles where she recorded and toured with Barry Manilow playing soprano, alto, tenor and baritone saxophones as well as flute and piccolo.   She has also played with Roger Daltrey, John Mayall, Frank Zappa, Chaka Khan, James Brown, Steve Cropper and so many more and was the band leader and music director for “The Chuck Woolery Show.” She is regarded by her peers as a bold and passionate player. Highly-respected saxophonist Dana Robbins, who currently plays for Grammy Award winning artists Delbert McClinton and Aretha Franklin, released her second solo effort, Dana Robbins, in 2014. Dana Robbins is the follow-up to her 2010 debut, So So Good. The self-titled album comprises 11 songs; it is a mix of original music, co-writes and cover material. 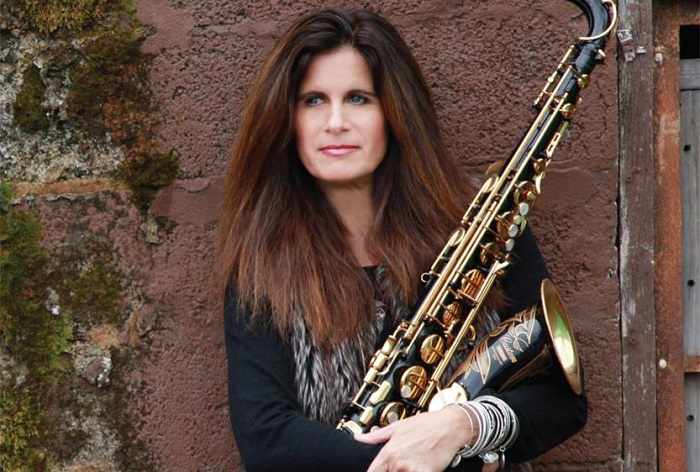 Just click on the album’s first track, the sly, tart “Say It Again,” and you’ll understand why Music City insiders consider her an instrumental MVP, a first-call when you’re looking for a sax player. It’s not like she had a choice. The saxophone has been her obsession since the fifth grade. When it came time for her to join the school band, she was sent to the auditorium, where all the instruments—strings, woodwinds, brass, percussion—were set up and students could walk around and decide what to play. It’s a connection that musicians as varied as British blues legend John Mayall and Barry Manilow wanted to tap into. And touring with such high-calibre talent was a master class in sustaining a career in music. But Dana has too much talent to remain a side-woman; it wasn’t long before she was ready to take the spotlight. So So Good, her 2010 debut, was a jazzy, R&B collection; the new album was going to be a rootsier, more down-home affair, one that reflected the broad range of her influences, from the classic bop of Cannonball Adderly, the gritty soul of Maceo Parker and King Curtis, to the more modern style of Michael Brecker. After one listen, it should be obvious she stuck the landing. And that there’s is no limit to how high she can climb or level of stardom she can achieve. Soon everybody will know Dana Robbins’ name.

What did you learn about yourself from the Rock n’ roll culture and what does the blues mean to you?

I grew up with the Stones, Dylan, Hendrix, Led Zepplin, Bob Seger. I was very lucky to grow up with Classis R&R. Music is so different now. I always really liked it if there was a sax solo in the music, it was a big influence. I knew by the age of 14 that I wanted to be on the radio. Blues music comes from the soul, it goes deep inside. Being a blues sax player, I try to tell a story with my horn.

What were the reasons that you started the researches of music and sax? What characterize your music philosophy?

I’ve played music since I was 4 years old, that’s when I started piano lessons. I started playing sax when I was 12, I was drawn to it, just one of those things that was meant to be. Been playing my whole life. Music is the international language. It’s what keeps us all connected. It doesn’t matter where you are on the planet, music surrounds us all, always has, always will.

Which musicians have been the most important experiences? What was the best advice anyone ever gave you?           Photo © by Steve Mack, All Rights Reserved 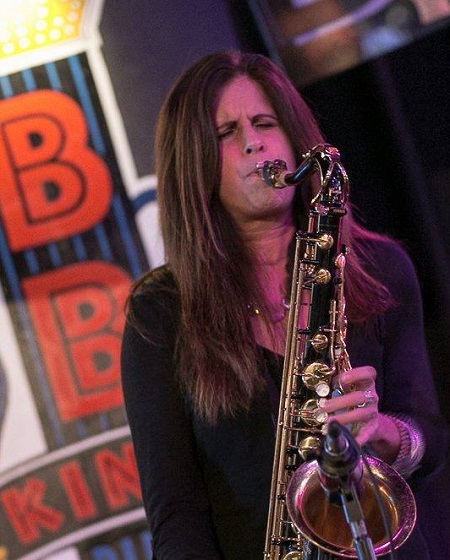 I’ve been very lucky, I’ve been around and played with many great artists. When I was in my 20’s, I played with Frank Zappa for a couple of songs at a club in Ann Arbor, Mich. That was so much fun because the audience went crazy!

Barry Manilow was a great experience because he taught me about being ‘prepared’ for a gig, about rhythm, and about intonation. We played in front of thousands of people every show.

John Mayall introduced me to the blues, he had Walter Trout and Coco Montoya at the time. Debbie Davies was in the band with me. We opened up for John, and after our show I always stood by the stage and listened. He has always had great musicians in his bands. He taught me how to deal with being on the road. I recently talked with Robert Plant in Nashville TN and he told me “Never Surrender”. I think that means never stop doing what you love to do. And Delbert McClinton is so authentic, he’s such a great singer. He comes from that Texas Blues scene and he tells a great story when he sings. I’ve learned a lot from him. Best advice I think I ever heard, and I’ve heard it many times is to “Be Prepared”

-Having Delbert McClinton sing on my 2nd record -Playing in Aretha Franklin’s horn section and being introduced by her on stage.

-Sitting in with John Mayall’s band.

-Sitting in with Shawn Murphy at a jam (Little Feat, Bob Seger)

-In the studio playing baritone, tenor, alto sax parts on my lastest record on a big band arrangement. That was so great!

-Being band leader on a Television show, learning about the world of TV.

-Being invited by Tom Hambridge (produced my 2nd record) to meet Buddy Guy at a recording studio in Nashville and watch him lay down a vocal track.

-Playing in front of 20,000 people with Manilow every show. Playing on the Tonight show (with Johnny Carson).

What do you miss most nowadays from the music of past? What are your hopes and if you could change one thing, what would it be?

We had the radio on all the time growing up. We bought LP’s and couldn’t wait to listen to them. I grew up listening to Motown, horn bands, Rock and Big bands but I also loved King Curtis, Bonnie Raitt and Sippie Wallace, BB King. When you went to a concert, could hear every player on stage. There is great music being written all the time, but I miss hearing live music mixed well, where you can actually hear everyone on stage NOT JUST bass and kick drum. I want musicians to get paid for their music. It’s our income, it’s how we earn a living. I don’t think ‘one thing’ would change anything. I do know that it takes a team of people to make changes and I know that there are lots of organizations today working really hard to turn the industry back around. "Blues music comes from the soul, it goes deep inside. Being a blues sax player, I try to tell a story with my horn." (Dana Robbins on stage, 2012 / Photo © by Danuta Bois, All Rights Reserved)

What are the lines that connect the legacy of Music City from Blues and Soul to Jazz and R&B? What is the secret of local scene?

Interesting question. Musicians here in Music City are extremely talented and are very friendly and that creates a strong network of players....There is a lot more than just honky tonk country bars in Nashville. There are blues clubs and a big R&B scene and a small jazz scene. I tour with Delbert McClinton but I also play gigs in Nashville area. Because I play with different bands, I need to know blues, jazz and R&B tunes. I’ve been playing blues jams for years. Network, network, network.

What has made you laugh from Frank Zappa and what touched you from Aretha Franklin?

I couldn’t believe it when Frank asked me to sit in with his band....My band was playing, and Frank and his band all came in after their show at the big arena in town. We invited them to take over the stage play a few songs and as soon as they got on stage, Frank turned and looked at me at the side of the stage, and motioned for me to come up beside him and start playing. It was a nervous laugh, and I’ll never forget that night!

Playing with Aretha Franklin is amazing. I’ve been working with her for 7 years now, and I still can hardly play my charts because I just want to listen and watch her. I’ll never forget the night I met her. I was standing in the hallway after the show waiting for her son Teddy, who was playing guitar for her that night. Teddy and I had a mutual friend in Nashville and we were all going to go out for a drink. I didn’t realize that the whole band was waiting in front of Aretha’s dressing room. All of a sudden, the door to my left opens and its Aretha. I just looked at her and said “Thank You” and then she said: “You play very well”. I’ll never forget that night.

What does a female artist in a “Man’s World” as James Brown says? What is the status of women in music?

I just stay positive. I’ve had great opportunities. There are plenty of talented women players in Blues right now. I see them at festivals all the time. It’s great. I was hired to play a festival in San Antonio several years ago and it was all female sax players performing for 2 days. Women from NY, LA, San Francisco, Nashville. Very cool. We all find our way in the music industry.

What is the impact of blues, soul and jazz music and culture to the racial, political and socio culture?

Let’s just say that blues, soul and Jazz music weaves its way through all of this. Music is very powerful and can unite people together. Music can reach out to many movements and make a real impact. 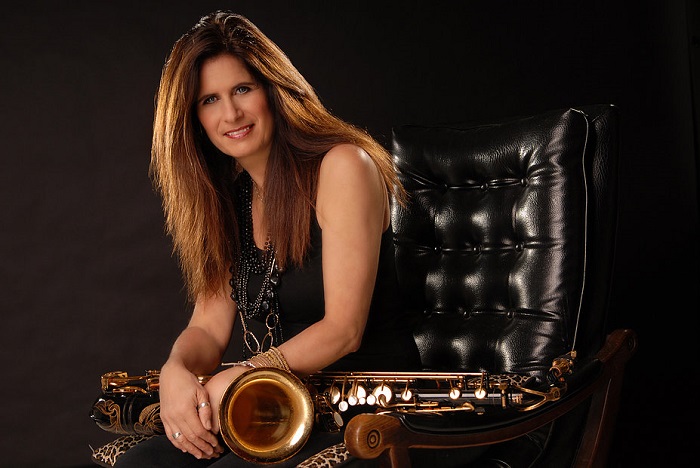