Gere, an active philanthropist for Tibet and HIV-AIDS education, revealed he sold the collection, comprised of 110 guitars and amps made by manufactures such as CF Martin, Gibson, Fender, Marshall, Vox and Gretsch, as a part of his ongoing effort to support global humanitarian causes. 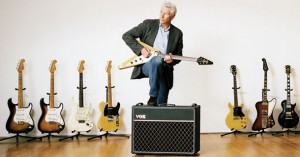 The instruments, amassed since the actor was a child, included several top branded pieces such as Gibson and Fender and guitars once owned by blues legend Albert King and Jamaican reggae musician Peter Tosh.

Kenny Keane, the specialist head of department musical instruments, said the collection was an intensely personal one for Gere.


"He wasn't outsourcing the purest examples of guitar making ones that were unused the way say a coin or a stamp collector would collect," Keane said at a preview of the sale.  "He was looking for instruments that did something personally, tonally for him."

Richard Gere studied trumpet and is a self-taught pianist and guitarist. As a leading Hollywood figure is known for his dynamic roles and iconic characters, but he is also an accomplished musician playing and hanging with blues and rock greats like Buddy Guy, B.B. King, Robert Cray, and Keith Richards.

The top lot was a Gibson 1960 Les Paul solid-body electric guitar, which sold for $98,500 including commission, beating the $90,000 high pre-sale estimate. It was bought by a private U.S. collector.


Three of the sale's top 10 lots were purchased by the CF Martin & Co. Museum in Nazareth, Pa., including a 1931 CF Martin guitar and case that went for $62,500, right in the middle of the pre-sale estimate range.

The room was full of quiet guitar aficionados, including musician Steve Miller and redhead model, singer and songwriter Karen Elson.

After placing the winning $9,500 bid ($11,875 with the buyer’s premium) on a Gibson ES-335TD with Sunburst finish, Dr. Scott Forman, NY ophthalmologist hollered: “Yes!! It’s gorgeous and the sound is amazing, B.B. King plays a guitar he calls ‘Lucille.’ It’s the same model.”


“They have been my true friends through the best and worst of times. I never planned to put together a collection. I just bought ones that I liked, the ones that sounded good and played well,” Gere said. “Some are very special. Although it’s more than a little painful to let them go, each one has been played, loved and appreciated – and will be again.”

A March auction of Eric Clapton’s guitars, amplifiers and other memorabilia at Bonhams in New York raised $2.2 million for the musician’s Crossroads Centre Antigua, for drug and alcohol rehabilitation, almost four times its presale total of $400,000 to $600,000. The priciest item was a 1948 Gibson L-5P guitar that fetched $82,960.