"The Blues lets me express my feelings through the notes that I play. The Blues is a feeling that allows me to communicate with other musicians and listeners."

The saxophonist Ben "King" Perkoff was born in 1953 in Santa Monica, California -what he does with his exceptional feeling for tradition and music makes him THE "Honker and Shouter" of Berlin. Either with his own band or other bands: He plays artistically in a very personal manner with distinctive signs of emotion and melancholy, inspired by his strongest influences King Curtis, JR. Walker, Charlie Parker and John Coltrane. The “King” recorded another CD, “Let’s Stay Together” at the Saloon in San Francisco featuring his uncle Simon Perkoff on keyboards and his cousin Max Perkoff on trombone. The "King" recorded a third CD, "Blue Fun" with his Berlin band featuring Rudy Stevenson on guitar. Ben "King" Perkoff plays his own compositions as well as Blues and Jazz standards. His brilliant playing on tenor, alto and the seldom played sopranino saxophone is complemented by his flute playing. The ancient Rhythm and Blues ritual "walking the bar" that Ben "King" Perkoff resurrects must be seen as well as heard, and along with the legendary "Texas Tenor Saxophone" sound that he plays it is truly an experience.

The Blues taught me that I have a unique talent and not to ever lose confidence in myself. The Blues lets me express my feelings through the notes that I play. The Blues is a feeling that allows me to communicate with other musicians and listeners.

How do you describe “King” Perkoff sound and progress, what characterize your music philosophy?

My sound is what is known as the “Texas Tenor” sax sound. I love the Texas tenor players like King Curtis, Bobby Keys, Wilton Felder and David “Fathead” Newman. My music philosophy is to let every one play as best as they can and let the music go where it wants to, not where I want it to. 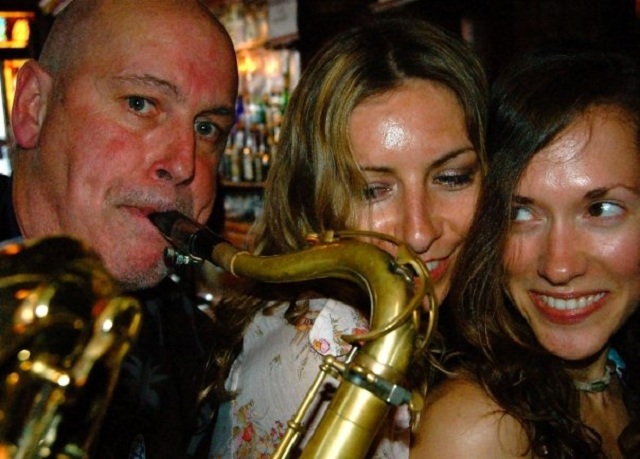 "Jazz and Blues is music from the heart and is played by musicians with heart and soul. As long as people feel this, the music will continue on forever."

The most interesting period for me was when I was first stating to play and discovering how great music is, being able to do something I love and get paid for it! At that time in the Bay Area there was so much music going on and such a great community of musicians.

Jazz and Blues is music from the heart and is played by musicians with heart and soul. As long as people feel this, the music will continue on forever.

Do you remember anything funny from Gravenites - Cipollina, Elvin Bishop, and Mike Bloomfield? 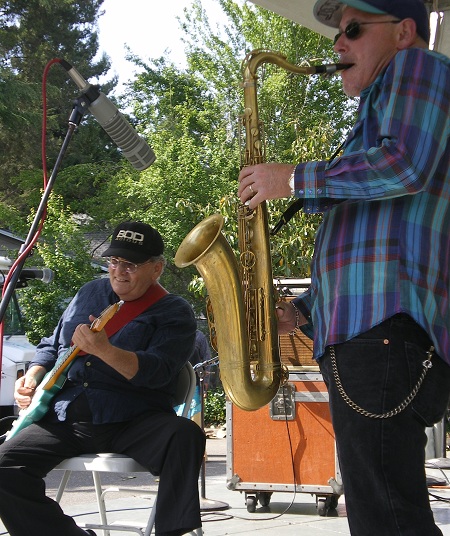 Nick Gravenites is a wonderful, funny guy with lots of stories about the musicians so it’s always a blast to listen to him tell us and the audience about what was going down in the 60’s and 70’s. John Cipollina was a very intelligent man and a classically trained musician, always fun to be around. John told me once, “Ben I like you because you play weird”. I take that as a compliment that he meant I don’t play like other people. Mike Bloomfield was very intense and intelligent. He had a T-shirt printed up for the band that said on it- “The Mike Bloomfield Band - We Lives For The Pretty Things” I don’t have my shirt anymore but I do still have a wonderful custom made leather jacket that he gave me! Michael spent a Christmas day with me and my family (my mother Susan, my brother Sasha, my two sisters Rachel and Eva and assorted other hanger ons) on the way to catch a cab after the festivities; he got hit by a car on the corner of Anza and 6th Avenue in San Francisco and suffered a broken leg. I broke my wrist a couple of weeks later and we were playing gigs together looking like a hospital ward! Elvin Bishop loved to hang out with Luther Tucker and sit in with us when I was playing with Luther. He was at about half the gigs and he loved Luther like a brother. One time I was playing at the Boarding House in San Francisco and the line up was Charlie Musslewhite, Elvin Bishop Mark Naftalin and Luther Tucker. I was tying to impress a beautiful female vocalist named Robbie Collins and I took her to the show and told her I would introduce her to Elvin backstage. So Elvin hadn’t yet arrived and we walked into the dressing room and Robbie says, “which one of you is Elvin Bishop? The drummer, Gary Silva, took one look at her and said “I’M ELVIN BISHOP” and we all started cracking up. He kept saying “shit I’ll be Elvin for you!”

One of the best jams was one time I was playing at the Saloon in North Beach with Eddie Money, Boz Scaggs and Annie Sampson from Stoneground. Another was when I looked up and Jaco Pastorius was standing in front of me and asked if he could play, I said of course and he played Geno Skaggs’ bass and sang “Linda Lou” and took a ripping bass solo that brought the house down! Another time was with the great jazz sax player John Handy and my uncle Si Perkoff on piano in Fairfax, CA. 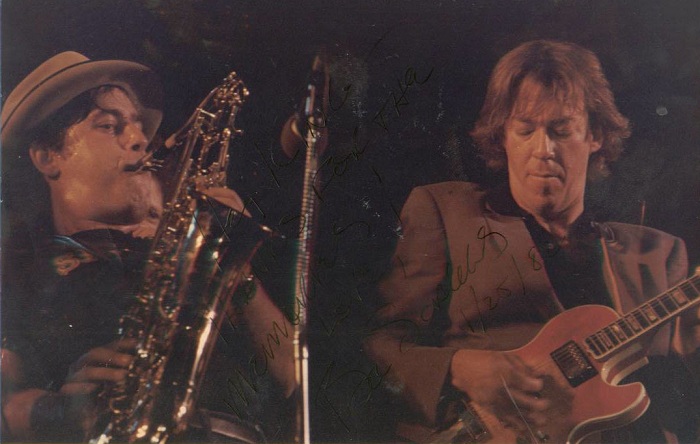 "The Blues runs through all of that music so that’s the basis and the connection. The Blues will never die." (Photo: Ben with Boz Scaggs at the SF Blues Festival)

That is an interesting question, but one of the most important meetings was when I met the harmonica player, Mark Adams, who in my opinion is the best living harp player now that Paul Butterfield is gone. I played many gigs with him and learned how to play with a harp and what works well, of course when you are playing with a player of that caliber it makes my job much easier. But through Mark I met and played with Mike Bloomfield and Nick Gravenites which led to other connections and gigs. Thank you Mark! My Uncle Si gave the best musical advice to me, when I first picked up a sax he told me to “learn all of the major scales first”.

Are there any memories from Big Mama Thorton, and Big Joe Turner which you’d like to share with us?

Big Mama and Big Joe were at the tail end of their careers and lives when I played with them but I remember we played a very early morning television program with her called “AM San Francisco” and the hostess of the program asked her where she got this great band, The King Perkoff Band from and Mama says “right here in LA” then the hostess says “ but we’re here in San Francisco now, Mama." Mama says “oh yeah I forgot.” She was drinking a lot of gin at that time. Big Joe said on our first gig together, don’t worry about nothin’, King, every song is in the key of C” And they all were except “ Sheik Of Araby” which was in F. By the way Mike Bloomfield was also on that gig with Big Joe. 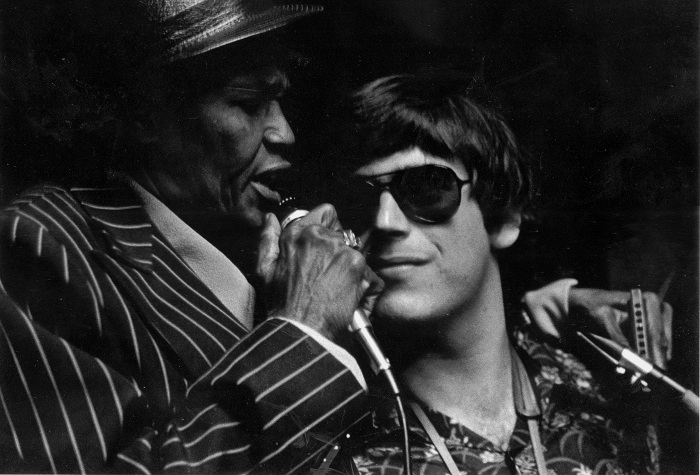 "My music philosophy is to let every one play as best as they can and let the music go where it wants to, not where I want it to." (Photo: Ben "King" and Big Mama Thorton. Photo by Mush Emmons)

Well what I miss is the closeness of the musicians and the community that was present back in my past. The music will live on forever; I’ve no doubt about that!

Which memory from Paul Butterfield, Luther Tucker, Albert Collins and Little Johnny Taylor makes you smile?
Paul Butterfield was a genius harmonica player, he changed the course of music. I was playing with him at a real dive bar in San Francisco and he died a couple months later. That makes me sad. But the music we played makes me smile. Luther Tucker was a real gentleman and such a wonderful guitar player. Albert Collins taught me the “snap” handshake where you snap your fingers as you shake someone’s hand. He would try and win the money back he had paid you after the gig by shooting craps. Little Johnny Taylor was actually gay but he had all these women in love with him and they would do anything for him, they would throw undergarments at him on stage-now that’s kind of funny.

What are the lines that connect the legacy of Blues with Soul and continue to Jazz and psychedelic music?

The Blues runs through all of that music so that’s the basis and the connection. The Blues will never die. 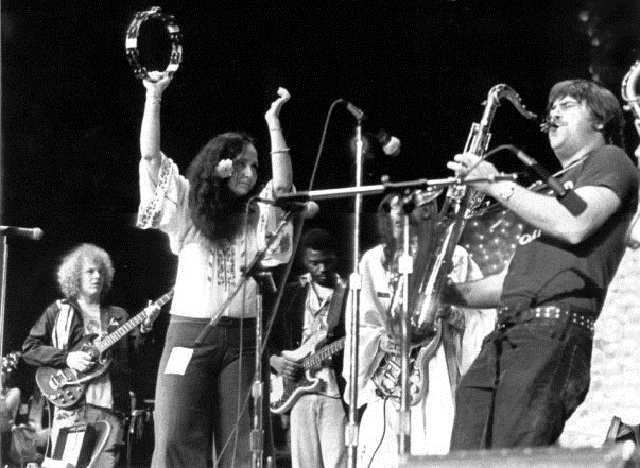 "Well what I miss is the closeness of the musicians and the community that was present back in my past. The music will live on forever; I’ve no doubt about that!" (Photo: Barry Melton, Maria Muldar, Tony Saunders, John Cipollina, Ben Perkoff at Hooker's Ball in 1978)

From the musical point of view what are the differences between European and American music scene?

I’d say the audiences are more knowledgeable but more reserved in Europe, the Americans have more fun as listeners and when you capture an American audience, they give you more back.

I would go back to New Orleans in the early part of the 1900’s –the birthplace of Blues and Jazz!