"The Blues is true to life as we live it. Because it is deep rooted in the fiber of man, it is a part of living. All the situations you deal with daily are in the blues."

Andrew ‘Jr. Boy’ Jones was raised in Dallas, Texas, by his mother Gladys, who was a single parent after divorcing her husband when Andrew was very young. The singer for a big band, Gladys retired to raise her family, and the band’s leader, Adolphus Sneed, stayed with the family as a father figure. Andrew received his first guitar from his mother for his seventh birthday, and he practiced every day. After noticing Andrew’s talent, Sneed bought him his second guitar. Andrew has amassed more than 50 years of experience as a professional guitar player. ‘Jr. Boy’ was in his first professional group, the Thunderbirds, backing Freddie ‘The Texas Cannonball’ King by age 16. In the ’60s, ‘70s, and ‘80s, ‘Jr. Boy’ toured the world with several music legends, such as Johnnie Taylor, Tony Coleman, Cornell Dupree, Little Frankie Lee, Bobby Patterson, Russell Jackson, B.B. King, Katie Webster, and Charlie Musselwhite, to name a few. 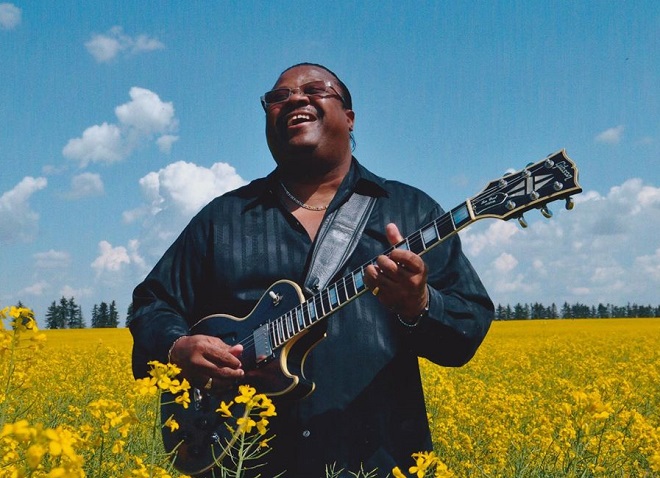 In 1996, Andrew began his solo career and also released the first album in which he was featured as a vocalist as well as a guitar player. He has since released five more solo albums, one of which he released from his own label, GalexC Records and his only live album on 43rd Big Idea Records. ‘Jr. Boy’ has been touring extensively with his blues band all over the country for the past two years, performing at several venues in and around the Dallas area. Andrew and his band have also performed at large festivals and international events. He also produced and played on his wife Kerrie Lepai's record, (Organic Blues) which is also released on GalexC Records. He has toured: Australia, Europe, Canada, China, Chile, Lebanon, just to name a few. Once with his own incredible band. Andrew has recorded an played a very visible and active supporting role in many influential and popular icons in the blues.

Where does your creative drive come from? What do you love most about the act of writing music?

My creative juices flow when I feel strong about something, and I begin to write about it. I pick up my guitar to put music to what I am feeling. Writing music is an excellent way to deliver what is in my mind and heart.

It can be slow, or fast, whatever best represents the story. The biggest reward for me is to hear the finished product of what I have created, and to have it sound like what I hear in my head and feel in my heart. The Blues is true to life as we live it.

"My hopes are that it (Blues) rises to the international acclaim that it once had." (Andrew "Jr Boy" Jones / Photo by Lori Patrick)

How do you describe Jr.Boy Jones sound and progress, what characterize your music philosophy?

The sound is progressive yet deeply rooted in respect for its history and tradition. My music philosophy is to learn as much musically to be able to convey the true feelings from my heart and to play with passion and from a place of honesty.

All of it is interesting. I am still doing what I am doing which fulfills me greatly to play music. I have had highs and lows thru all of it.

Because it is deep rooted in the fiber of man, it is a part of living. All the situations you deal with daily are in the blues.

That’s a hard one to answer, I have jammed with a lot of great people. Champion Jack Dupree to Freddie King, Charlie Musselwhite, Katie Webster, Kerrie Lepai to name a few.

Are there any memories from the late great Freddie King which you’d like to share with us?

When we played with Grand Funk Railroad and Rare Earth and being introduced to people like Robert jr. Lockwood and Willie Dixon, and recording with the great cast of musicians and artists on the “Larger Than Life" album with Freddie King.

What do you miss and what has made you laugh from the late great Freddie "The Texas Cannonball’ King?

I as well as a lot of people around the world miss Freddie King, Freddie King the man, the artist, the vocal power, musician, and the friend. I met B. B. King, Bobby Bland, Muddy Waters, and across all genres touring with Tower of Power, Rare Earth, Grand Funk Railroad, and met Robert Jr. Lockwood, T-Bone Walker, Lowell Fulsom, Big Joe Turner, and many others. I would have to say it was amazing. I had a great time with my bandmates: Benny Turner, Deacon Jones, Lewis Stephens, Mike Kennedy, Alvin Hemphill, and my roommate drummer Charles “Sugar Boy” Myers. 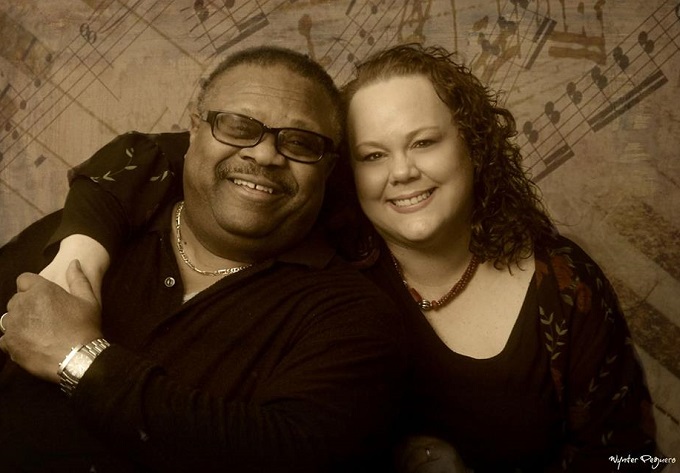 "I think every blues scene has its influences. Chicago is different from the West Coast. Texas is different from both coasts. You emulate what you hear, but at the same point, when you get real with it, some of you must come out in the music. No matter where you go, they have their own leanings and strong supporters of music." (Andrew "Jr Boy" Jones & Kerrie Lepai Jones / Photo by Wynter Peguero)

I am a little torn over this question. I believe it is both. It has already been classified as a genre, even thou people try to stretch it to fit their style. Nothing wrong with that, It keeps things fresh, as long as it does not borderline to where it is no longer blues.

What would you say characterizes Texas Blues scene in comparison to other local scenes and circuits?

I think every blues scene has its influences. Chicago is different from the West Coast. Texas is different from both coasts. You emulate what you hear, but at the same point, when you get real with it, some of you must come out in the music. No matter where you go, they have their own leanings and strong supporters of music.

Never stop learning. Learn as much as you can about the business. Copy rights, work sheets for your affiliates BMI or ASCAP and so on. One thing I am grateful about is, there are so many ways to get your music heard, and not have to depend on some record executive that does not get your vision. My latest release I recorded with my wife Kerrie, called “Jr.Boy & Kerrie’s Blues”. We did it on our label Galex-C Records. It is on all digital platforms.

Nothing heavy, but if by chance during your walk thru life, and you hear one of my songs, and my music can help get you thru a rough spot and bring you some peace, then that is what it is for. Ultimately, I would want my music to be meaningful to the listener.

Do you remember anything fun from the recording time with the Silent Partners, backed Katie Webster?

The great tours we had with Katie and the sounds checks were the most interesting because we got a private show from Katie Webster. 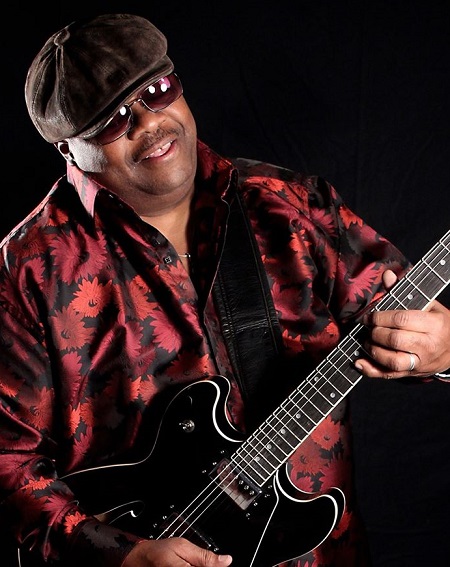 "My music philosophy is to learn as much musically to be able to convey the true feelings from my heart and to play with passion and from a place of honesty." (Andrew "Jr Boy" Jones / Photo by Dee Hill)

What are your hopes for the future of the Blues?

My hopes are that it rises to the international acclaim that it once had.

What is the best advice ever given you? What advice would you give to new generation?

He said no matter what level you are as far as a player and artist everyone has something to say. Learn more about the business as well as the music itself.

From the musical point of view what are the differences between: musician, songwriter, and producer?

Which memory from Cornell Dupree, Johnnie Taylor and Charlie Musselwhite makes you smile?

Cornell Dupree excellent guitar player and someone to watch, Johnnie Taylor was a great vocalist, Charlie Musselwhite gave me the stage.

Are there any memories from Albert Collins and Charlie Musselwhite, which you’d like to share with us?

I am grateful to Charlie Musslewhite for another amazing opportunity. I got a chance to co-write “River Hip Mama”, and “It’s Getting Warm in Here”. I got a chance to arrange music and travel the world. We did have some great times. I had great band mates: Tommy Hill – drums, Artis Joyce- Bass and Felton Crews- Bass. We were a blues band of brothers. Tommy Hill is playing on “Jr.Boy & Kerrie’s Blues”. Albert Collins was another inspiration to me. When I was with Charlie Musselwhite and we would be on the same festival with him, He would always speak and say, “Hey Boy, come on into this house”, talking about his dressing room. I showed him a guitar lick, I stole from him. He told me “That’s alright boy, it won’t sound like me. It is going to sound like you”. He told me, “Everybody has got something to say”. I always took that with me. It was very encouraging for me to continue my journey. 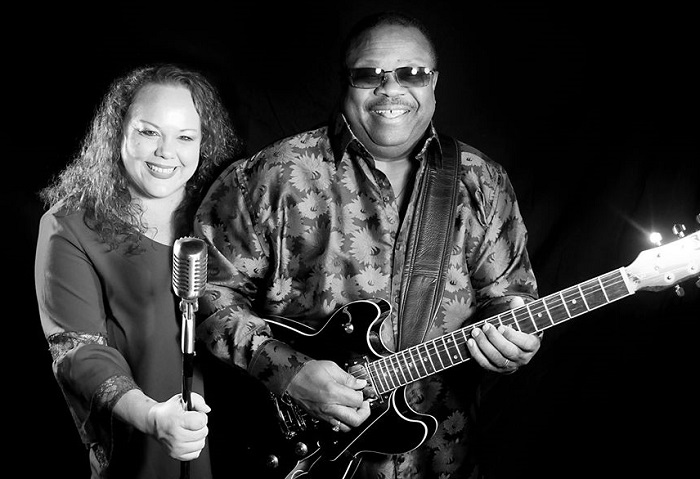 The most joys I have these days is with me and female vocalist that’s been with me for ten years and I have known for twenty-seven years Kerrie Lepai Jones. I would like that captured.

What are the lines that connect the legacy of Texas Blues with the other local scenes?

We have great blues guitar players.

People are expressing blues different today and you can’t get hung up on one style of delivering a story because Muddy Waters and Howlin Wolf were the newness of the blues music during their day.

On stage with my son Christole Jones with him playing bass with me in Switzerland. 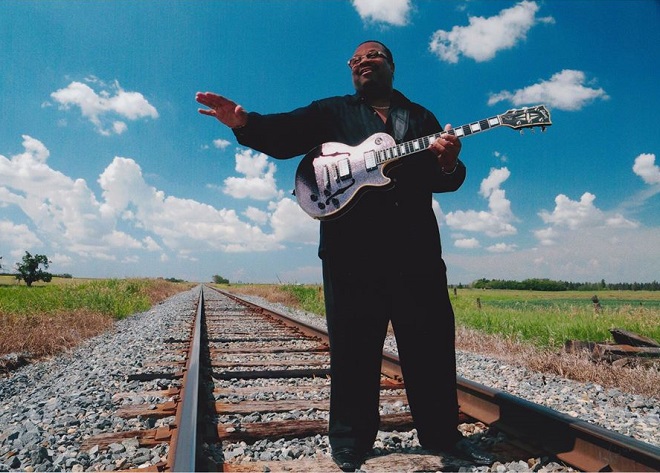