"I can be alone without being lonely. I think this helps me to really feel blues."

Shakey Vick: The Blues For Real!

Shakey Vick got into blues in the late fifties and early sixties in various duos and blues bands around London. In 1963 he formed his first band, teaming up with Chris Youlden. They won a heat of an R&B contest and did a gig at the Marquee, which was recorded by Giorgio Gomulsky of Yardbirds connection. In 1967 The first Shakey Vick Big City Blues Band was formed and started to gig around London and the home-counties circuit, including the Marquee, 100 Club, Klooks Kleek, etc. During those early years he worked with many American artists, including the late Champion Jack Dupree, Arthur Big Boy Crudup, and Johnny Shines. At about this time Shakey was asked to join Savoy Brown when their harp player left. The Shakey Vick band gigged regularly for a few years before Mel Wright, Ron Skinner and Rod Price split to form Dynaflow Blues. 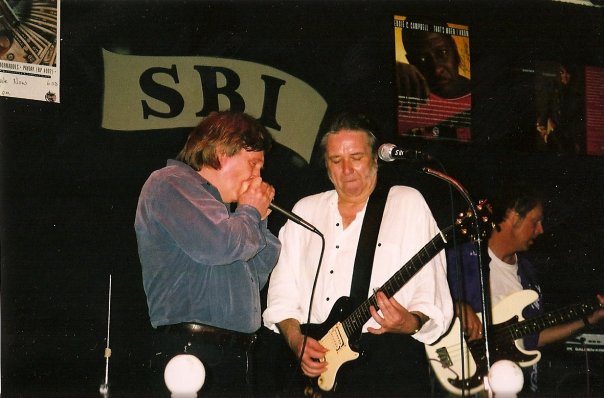 The Shakey Vick band continued with Bruce Langsman on guitar and the first album Little Woman You’re So Sweet, was recorded for Pye in 1969. In 1975 Big Bear Records asked Shakey to be the Artistes road Manager for the annual Anglo-American tour of France, Holland, Belgium, Switzerland and Germany. Here he travelled with Homesick James, Billy Boy Arnold and Tommy Tucker among others. A series of long-lasting residencies on the London circuit continued during the ups and downs of the blues scene in Britain. Shakey continued to play the blues when other bands were turning to Rock, indeed his whole career has been about encouraging interest in the blues, whether as a musician inspiring younger blues players via open mic jams, or as the editor of a blues magazine, British Blues Review, or as a promoter of blues gigs around London. Shakey edited the British Blues Review from April 1998 until July 1999. In addition to his band work, Shakeys promotions around London from 1992-1999 included the American artists, Kenny Neal, Lucky Evans (ex Howlin’ Wolf), Guitar Shorty, Elisha Blue and U.P.Wilson.

Shakey, when was your first desire to become involved in the blues & who were your first idols?

I first heard Big Bill Broonzy on the radio then later Sonny Terry and Brownie Mcghee. That’s when I became really interested in blues and they were my first influences. I was then influenced by James Cotton who was playing a gig with Chris Barber at a jazz festival. This turned me on to amplified harp. The first songs I learned were standards like “Got my mojo working” and “Blues with a Feeling“.

I suppose one of the attractions of blues when I first got into it was the image of the outsider, the loner who defied the odds. A bit romantic in retrospect. The blues means to me a music that is so basic to practically all modern people’s music that any one can find something there.. It offered me an escape from the humdrum of daily life.

I guess the best thing that happened to me was to play in America. The worst was my first live gig, when I couldn’t stop my legs shaking for the first five minutes because of nerves. 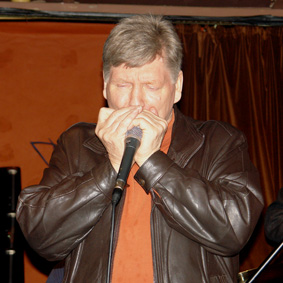 I’ve been homeless and hungry so I guess the blues is the one music where the experience can be shared through intensity of playing. Intensity and commitment are makes anyone good at anything.

Any of blues standards have any real personal feelings for you & what are some of your favorite standards?

Little Walter’s “Last Night” is special to me because for me it’s about losing loved ones. Most of Muddy Waters songs are standards that I enjoy. “I’m Ready”, “Honey Bee” and so on.

The funniest and most interesting thing about recording is when the whole band listen to a playback and all start commenting on it together. I usually head for the nearest bar then.

The most memorable gigs for me are the regular ones, preferably weekly at the same place. The rapport between band and regulars fans is greatest then. I’m always laughing at gigs when I stop playing and listen to the rest of the band during a solo. I just enjoy being among great musicians.

I can be alone without being lonely. I think this helps me to really feel blues. 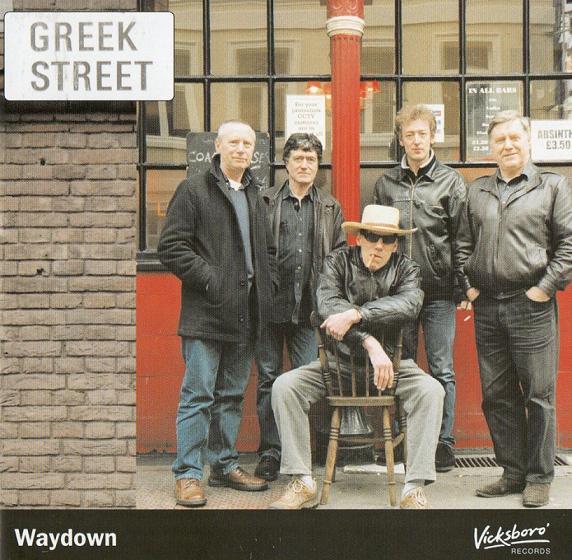 I picked up my harp style through hearing Little Walter and Big Walter Horton playing live. The best of my work is probably on the “Greek Street” Cd.

I play harp because I find the sound so haunting. I tend to squeeze notes out rather than hurry them out. Time and familiarity have helped my progress.

Tell me about the beginning of Big City Blues Band. How did you choose the nickname “Shakey” and where did it start?

The Big City Blues band came about when I answered an advert in a music paper for blues players, The name “Shakey” was after the Two american harp players Shakey Horton and Shakey Jake.

I wonder if you could tell me a few things about the story of Shacey Vick & Chris Youlden blues duo at early 60s.

We called ourselves Buck and Wing after an old dance type. We went round a few folk and Jazz clubs. One I remember was the Ken Colyer Club where we did a few numbers in the interval. We didn’t do much duo work. I think the one memory that I like is when Muddy Waters was finally making a decent living some one asked him how he could still carry on playing Blues. “I’ve got a long memory.” he replied.

Tell me a few things about your meeting with Jack Dupree, Big Boy Crudup, and Johnny Shines, what kind of guys was?

My first meeting with Jack Dupree was when I was doing a Muddy Waters song “Long Distance Call. Jack just walked on stage and sat down at the piano and joined in. Arthur Crudup was quietly friendly and Johnny Shines was a gentle guy.

I don’t think there are any secrets about blues. I have learned by listening.

What do you think were the reasons for the blues boom at the early sixties in UK?

The sixties blues boom was about time and place and a group of youngsters in a new age of awareness.

How is your relationship today with the other British blues musician of ‘60s?

I still see a few musos from the sixties, but not so often. I have a lot of respect for their perseverance with the music.

What is the “thing” you miss most from 60s; make an account of the case of the blues in UK in 60s?

What I miss most is the chance to hear live the greats such as Muddy, Little Walter, Big Walter, Howling Wolf and Sonny Boy Williamson. These people kicked off a great change in music making. The music business has got slicker and more image oriented. Unfortunately the down side is that many small outlets for blues have closed down.

The one I admire most is one I never met - Robert Johnson.

Is there any difference and similarity between the musician, promoter, road manager and editor?

All the people associated with music in whatever role probably have a feeling for it before anything else. Jointly, they are what makes music available. Each of their jobs are distinct, but they are all in the business of publicising music.

Would you mind telling me your most vivid memory from the road with Homesick James, Billy Boy Arnold, Tommy Tucker and  among others?

Difficult question, but who of the people you have worked with do you considers the best friend?

Of all the people I have worked with, Chris Youlden is my longest friend. Do you have any amusing tales to tell from your work in British Blues Review?

I don’t have anything amusing that springs to mind. But I did enjoy working on the magazine. I think we were at the wrong time in retrospect.

Apart from the musicians I’ve already mentioned there are so many more. B.B.King, Elmore James, Little Milton, Bobby Bland, Buddy Guy and Junior Wells, the list is endless. If I did it all again, I would be more business-like. I would probably drink less.

Young musicians should accept that they are in a business and in for the long haul. They should believe in themselves.

I have no special plans except to keep playing. For Greek fans, you are having so many problems that the blues is definitely the music of the times. I wish you all well and I wish the rest of Europe would get behind you and support your efforts.

The blues is still with us because it has universal themes. 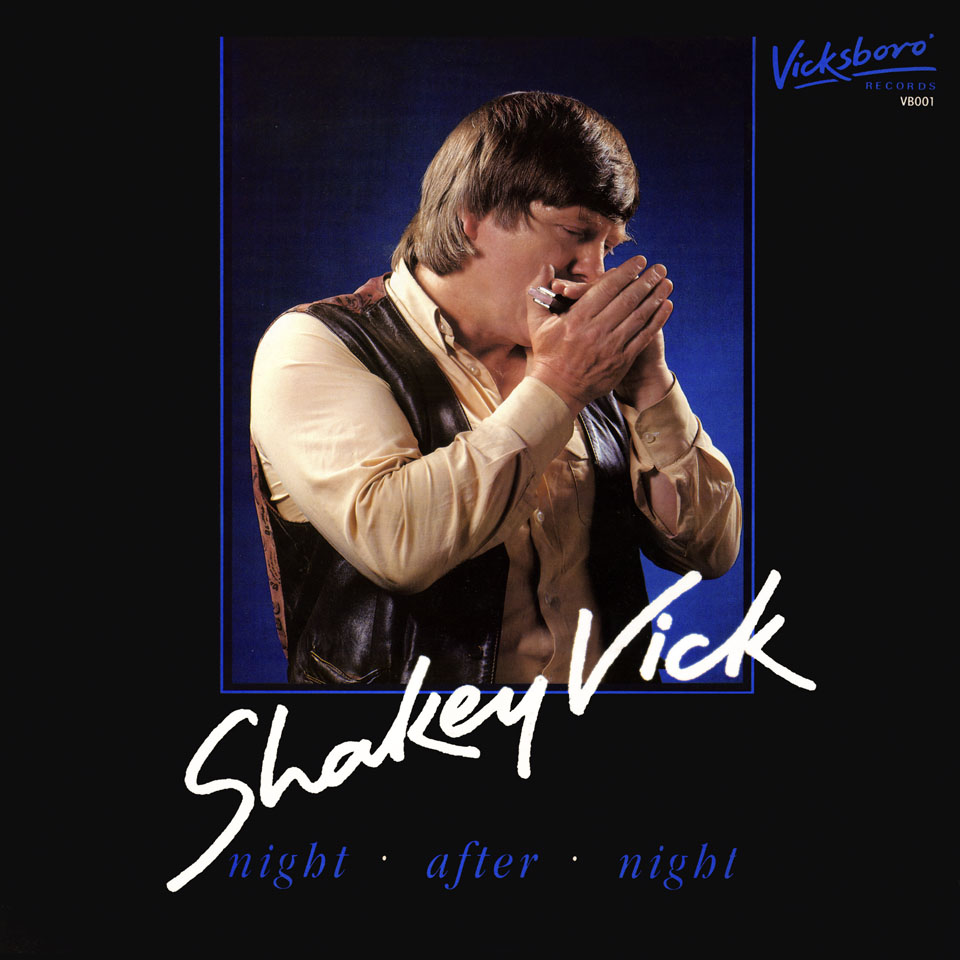