Versalite musician, producer and engineer Carmen Grillo talks about the rawness of the music of past

"Nothing is better than capturing a great take in the studio with real musicians. In my opinion, no computer can compete with that."

Born in Buffalo, New York, and raised in Santa Cruz, California, guitarist Carmen Grillo started his musical journey by playing saxophone and drums at the early age of 5. When his father took a young Carmen to a Ventures concert, he decided then and there he wanted to be a guitar player. Carmen credits The Beatles, Eric Clapton, Jeff Beck, George Benson, Ray Charles and Aretha Franklin among his early influences.

In his teenage years, Carmen fronted several local Santa Cruz bands, including Feel Machine and White Eyes, and regularly played all the local venues. In pursuit of more creative endeavors, Carmen left Santa Cruz in the late 1970s and moved to Los Angeles. He soon became an in-demand session guitarist and vocalist. His credits in the studio include Bill Champlin (Chicago, Sons of Champlin), Rita Coolidge, Donna Summer, Tom Scott and Tim Weisberg to name a few. 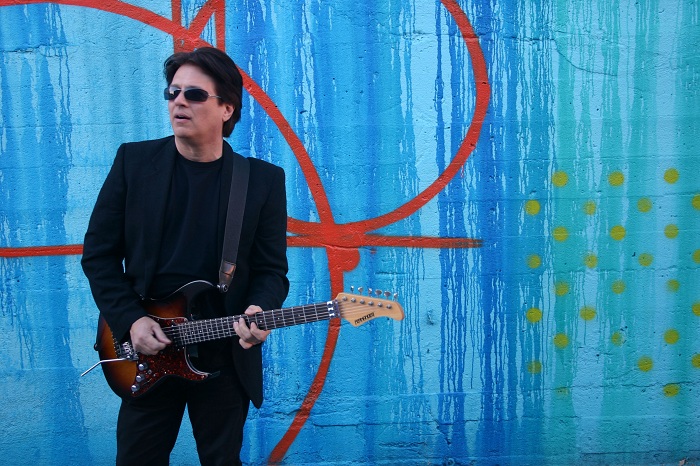 Carmen GrilloCarmen then joined the legendary horn-based soul band Tower of Power in 1988, where he became a driving force within the group. His writing, singing and guitar playing made him easily recognized by music fans around the world. He performed and recorded with TOP for the better part of a decade before leaving in 1997 to pursue other musical interests.

Those interests included opening the doors to his recording studio, Big Surprise Music, where he is a music producer and the chief engineer. Among his most rewarding experiences now are mentoring others and sharing his vast knowledge, experience, humor and wisdom with future generations of aspiring guitar players and recording engineers, as well as being the Musical Director of Arise Christian Center in Westchester, California. In addition, Carmen is a voting member of the National Academy of Recording Arts and Sciences (NARAS), which presents the recording industry’s most prestigious award, the GRAMMY. Carmen Grillo, releases long-awaited solo album A Different World (2013).

From whom have you have learned the most secrets about the music? How has music changed your life?

Well, to tell you the truth, there have been many secrets revealed by many different sources. From my first guitar teachers who inspired me to learn and expand, my mother who played piano by ear, my father who never played an instrument, but was a great audience and taught me how to listen to music. My early band mates who were much older than me taught me to never be afraid to experiment and stretch out, you know, play things that were a little outside the norm. So really, everyone I’ve ever played with has taught me a secret or two.

To answer the second part of your question, Music is my life. It keeps the lights on, food on the table, and gas in the car. I’ve never had a real job, so I think the only way I can answer this is that music is my life.

How do you describe Carmen Grillo sound and progress? What characterize your music philosophy? 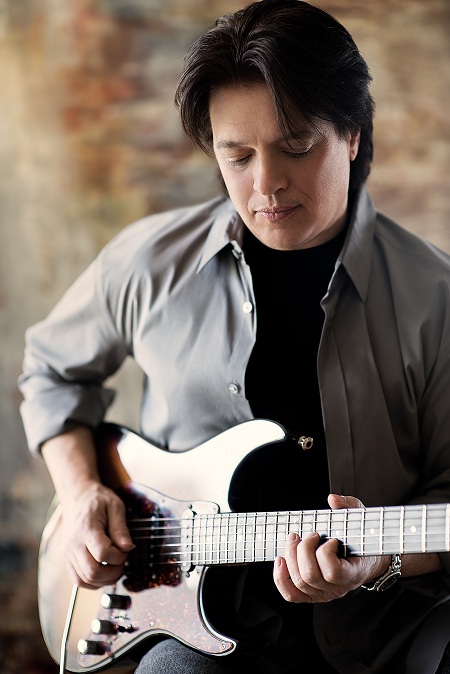 My guitar tone is my inner voice. Lots of people ask me what kind of amp, strings, etc. do I use. I always say that my tone comes from within. Its how I feel, and that feeling comes out through my guitar playing and singing. As far as my philosophy goes, here it is in a nutshell - Try to do better today than yesterday. That’s what I’ve been striving for my whole career.

"Exposing more Blues, Soul and Jazz to more people through mainstream radio. That would be my wish."

I think the transition of being a saxophone player and a drummer to being a guitar player was the most interesting time. When I was ten, my father took me to see The Ventures. At the time, I was playing sax in the school band and playing drums in my room taking private lessons. After I saw the Ventures, it didn’t take long for me to figure out that the drummer was way in the back and that The Ventures had no sax player. Nokie Edwards was the guitar player in The Ventures and I instantly knew that guitar was my instrument. The next day I put the sax in its case and put the drums in the closet. I had some money saved. My dad helped me buy a guitar and I was off and running.

I think the first time I met Ray Charles was pretty amazing. I told him that he was such a big influence on me, that I named my son after him. He seemed pretty happy to hear that from me.

When I was fourteen, I had a chance to meet and play with B.B. King. He told me to learn the whole guitar like the alphabet. He said, “you can only spell so many words if you know only A to M. If you know A to Z, you can spell all the words”. In other words, know the whole instrument low to high and everything in between. Pretty good advice if you ask me.

I’ve had many unforgettable musical moments with Bill Champlin. In the 80’s when we played together supporting his two solo albums Single and Runaway, we had some moments on stage that were just bone chilling. Bill and I have played together on and off for many, many years. Still to this day, when we play together in the Sons Of Champlin, we hit some musical moments that are too good to be true. We really seem to be wired to the same computer.

"I miss the live feel that the musicians got in the studio. It still happens from time to time but not the deep grooves that I love from the Motown and Stax years." (Photo: L - Carmen with Sons of Champlin, R - Carmen with Tower of Power)

Are there any memories from recording time in Big Surprise Music Studio which you’d like to share with us?

Most recently recording Dave Koz’s album Summer Horns. It was nominated for a Grammy last year. It was the first time I worked with Dave and producer Paul Brown. A very musically gratifying experience.

I miss the live feel that the musicians got in the studio. It still happens from time to time but not the deep grooves that I love from the Motown and Stax years.

I hope music gets back to the rawness of the past. Using the computer to record has greatly helped in a lot of ways, such as editing, but it has also made things a little too easy.  You don’t have to rely on a great performance to make a track sound great. You can fix it in Pro Tools. Nothing is better than capturing a great take in the studio with real musicians. In my opinion, no computer can compete with that.

Which memories from Tower of Power, Bill Champlin, Rita Coolidge, and Tom Scott makes you smile?

Tower Of Power is magic. No matter what era of that band you listen to, it always has had the best musicians, arrangements and songs. One of my favorite memories was performing with them again at the Fillmore in San Francisco for the 40th Anniversary. That was a special night that thankfully was captured on DVD. If you’re a TOP fan I strongly suggest you check it out.

Bill Champlin and I are still making memories. We’re not done yet. I do remember when we played for the first time live “After The Love Is Gone,” which he wrote for Earth Wind And Fire. To be on stage performing that great piece of music with the writer singing his song was a real highlight in my career. 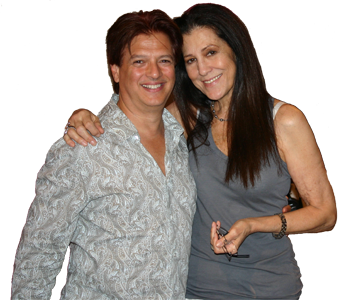 Rita Coolidge (photo) taught me how to be a professional. I played with her 1980-1985. I watched and learned from her. No matter what shape she was in, up, down, happy, sad, feeling good, or feeling bad, the audience always got her best no matter what. She’s a pro and always gave her all. That’s what I learned from Rita Coolidge.

Tom Scott is an incredible musician. I did two live to two track albums with him back in the day, Target and Desire. All the tracks were done with no overdubs. We recorded each take just a few times and took the best one, and that was the album. No mixing, no punching in. As soon as the take was over, it was a done deal. Lots of pressure, lots of fun. Tom plays on a track on my new album A Different World called “Prototype.” We both play the melody together. It was great to have him make an appearance on my album. We always have at least a few laughs.

It’s constantly evolving. People like Keb Mo’ are blending the blues and soul music together in a great new original way. Guys like Robben Ford and Larry Carlton blend the Blues and Jazz styles. Buddy Guy has always been a soulful blend of Rock and Blues. It goes on and on.

Exposing more Blues, Soul and Jazz to more people through mainstream radio. That would be my wish.

My musical buddies are all comedians. We laugh together every time we see each other. It’s amazing that we get any work done. After a recording session over here, my face hurts from laughing so much.

I think I am touched emotionally when I hear that a fellow colleague or someone who’s music I admire loses his or her life to drugs. It is truly a tragedy that so many of us musicians take that path. 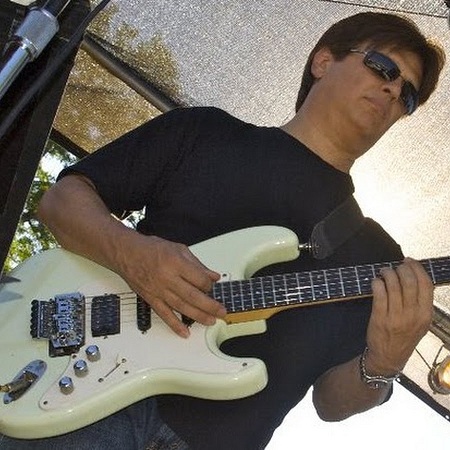 Wow! I never really thought about that, Let’s see. How about a trip back in time for a day in the studio with Jimi Hendrix recording the Are You Experienced album. I would love to be a fly on the wall for one of those recording sessions. Jimi was a game changer.