"We're preparing for the release of ZZ Top's next recorded work - soon to hit the streets - hopefully by the end of 2011", ZZ guitar legend Billy Gibbons tells Houston's Fox 26. "This year is gonna be a banner year on a number of levels but we're throwing our hat in the ring." As Hennemusic initially reported last September, ZZ's new project was produced by a music industry legend. 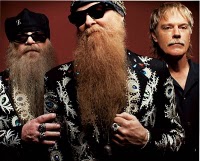 "We have stepped out and joined forces with a notorious character within the record world... Mr. Rick Rubin", says Billy. "Rick has successfully brought in his particular piece of magic in offering a few suggestions", he adds, "and basically stepped back and he said 'you really don't have to get much better; just do what you do'. He realizes the foundational piece of this great American art form of the blues penetrates so much of popular music, he said 'just turn it up and let's go'". A few weeks ago, fans learned that a new ZZ song, "Flyin' High", was doing just that - in outer space. Astronaut and ZZ pal Michael Fossum, currently headed to the International Space Station on a Russian spacecraft, is carrying a copy of the track, which will show up on the new album.

Where is the project at these days? "We finished tracking, going into the next mode of mastering", says Gibbons. Any hints at what fans can expect for the first new ZZ album since 2003? "Since the music is a return to the early ZZ Top roots, I believe there's always that Tex-Mex accompaniment", Billy says. "I wouldn't be surprised if we leaned that direction again." "We're having a blast. It's loud, it's fast... streamlined right on down the line. ZZ Top is just what it is." ZZ TOP’s new album is now finished, being mixed, and will be released in the fall of 2011.

Billy Gibbons tells Mojo magazine, “It sounds and feels like Tres Hombres, with a few elements of the Eliminator period thrown in. A pretty wide range, from basic blues to slightly more fancy stuff. 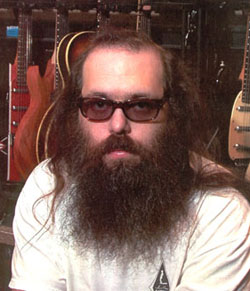 Songs recorded include 'Flyin’ High,' 'More Slower Blues', 'Chartreuse' and 'Have A Little Mercy'. The latter is, says Gibbons, inspired by early B.B. KING cuts. The sessions have been executive-produced by Rick Rubin (METALLICA, SLAYER). Gibbons adds, “The thing about Rick is he pushes the artists to spend more time reaching down deeper than they normally would.” ZZ top recorded at the famous Shangri La Studios in Malibu with engineeer Dave Sardy (OASIS, JET). The trio then moved back to Texas, to Foam Box Recordings in Houston, with long-time engineer Joe Hardy. “It was the Sardy and Hardy party,” said Gibbons.

A version of 'Flyin’ High', which is not confirmed for the album, has already debuted: played en-route to the International Space Station on Russia’s Soyuz spacecraft. “We figured it’d be the perfect song to pass along to the astronauts,” said Gibbons. Not every song will be as as radio-friendly as 'Flyin’ High', insists Billy. 'More Slower Blues' is “simply one chord, that never stops.”

ZZ Top have yet to reveal the album’s title and its final tracklisting.

The tour marks the first time in many years that these iconic standard-bearers of Southern Rock will have toured so extensively together. 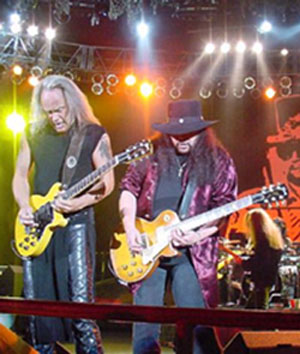 Rebels and Bandolers is more of a coming together of friends more than a mere tour, Gibbons said. Were delighted to be hitting the road with our Skynyrd brethren once more. Its going to be a great ride.

“We love the guys in ZZ and their music, and cant wait to get back out on the road with them. This show is an event that the fans are going to love. Two legendary bands in one night what more can the fans ask for to kick off the summer of 2011!