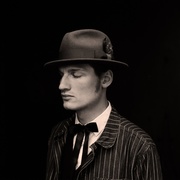 Bror Gunnar Jansson (and yes that is his real name) was introduced to the great worlds of music before he even was born. He's, together with his sister, the fourth generation of musicians in his bloodline. His father is a well renowned bass player who toured with jazz legends such as Chet Baker, Toots Thielemans and Dexter Gordon.

So Bror Gunnar grew up with music as a natural ingredient of life. He spent much of his young age at jazz club Nefertiti. He spent so much time there that he got to know both staff members, other regulars and even the musicians playing there. In fact he frequented the venue so often that even some people in the staff thought he worked there (which subsequently he did, once he was old enough). Part from this he did all the typical things a young person interested in music would do, he went to a lot of different music schools and played in a lot of different bands and projects.

The years and the schools went by and after almost taking a bachelor's degree (he failed to write an essay) as an "individual musician" at the university of Göteborg some years ago he's been solely working with his art. He released his self-titled debut solo album (and an album with the band Serve You Right To Suffer) in 2012, which had some really good reviews, but not too much happened with it.

During the summer of 2018 Bror Gunnar headed back in to the studio again to work on his sixth solo release, his fourth solo album. This future release is named “They Found My Body In A Bag” and it’s a full length album. Where the majority of the songs has taken inspiration from real life crime investigations. Both historical cases and ongoing investigations. This album was released September 20, 2019.