"I miss better radio. It used to be that you could actually discover good music on the radio. Now it’s all the same bubblegum. And there’s not much blood and sweat in music these days."

Born in Montgomery, Alabama in 1957, Bill Hinds was immersed in music from the beginning. Like so many others from his generation, playing the guitar became a foregone conclusion after witnessing the Beatles on the Ed Sullivan Show in 1964. At 15, he began gigging around a local music scene that included The Commodores, Tommy Shaw, Beth Nielson-Chapman, Allen Hinds, and a score of equally gifted, if less well known, singers, players, and songwriters. In 1976, Bill made the trip to Muscle Shoals, Alabama with Montgomery's fabled band Harmony to do some recording, which led to a series of callbacks for demo work and record dates. He continued touring clubs and playing around Montgomery while making the commute to the Shoals for session work.                 Photo by Sam Wright After a two-year break from the music biz for personal reasons, Bill moved permanently to Muscle Shoals in 1986 and never looked back. His credits include albums by Roy Orbison, Johnny Taylor, Denise LaSalle, Dobie Gray, and Huey Lewis & The News. After playing on the Foresters’ Talkin’ ‘Bout Men and I’ve Got A Date albums, he began touring the world with them and eventually relocated to the mountains of north Georgia. Sometime around the turn of the century, Bill decided to try his hand at website construction and hosting. This led to the creation of a small, one-man labor of love called Lookout Web Services. LWS has a very small client roster which allows for a personal touch in website creation and hosting. Meanwhile, Bill met singer/songwriter Paul Thorn while living in Muscle Shoals and has been Paul’s mainstay guitarist ever since, playing acoustic, electric, and slide guitars on ten albums and touring with one of the best rock and roll bands on the road. He also oversees Paul's web presence and strategy. Paul’s seventh CD, A Long Way From Tupelo, was released in the summer of 2007 and it reached #11 in the Americana Music Association's Top 100 Albums of 2008. His next album, Pimps and Preachers, spent the summer and much of the fall of 2010 in the AMA's Top 10. Then came an album of cover songs, What The Hell Is Goin' On?, which debuted at #83 in Billboard's Top 200. 2014 saw the release of Too Blessed To Be Stressed in July. It spent the rest of the year in the Top 5 on the AMA's radio airplay chart and placed 15th on their end-of-year Top 100 list. Bill also teaches guitar occasionally in his home and online.

What do you learn about yourself from the Rock and Rhythm & Blues culture? What does the blues mean to you?

I grew up listening to Pete Townshend, Jimi Hendrix, The Allman Brothers, and Led Zeppelin, among many others from that period, so I’m a 70s rock guitar player at heart. I learned early that a quiet, shy guy like me could be plenty aggressive through music. That’s the main thing I’ve taken from rock music – the sheer joy of reckless aggression on the guitar. As far as R&B and the blues are concerned, I’m afraid I’ve only scratched the surface. The tradition of black music in America is so deep and broad that it’s impossible to explore completely, but I’ve explored and digested as much as I can. The blues, at its core, is a direct connection between the human heart, the chosen instrument, and the listener’s heart. It’s a sharing of the joy, sadness, anger, and grief of the experience of living. There are many things that stand in the way of that direct expression and most involve trying to play. The trick is to forget everything, simply feel the moment you’re experiencing, and expressing it – a very tricky thing to do. You can’t get there by trying, but by letting go. Rhythm & Blues is just blues that makes you want to dance. In R&B you must never forget that you’re part of a unit, a soldier among soldiers. You listen intently, you lock in, and you stay out of everyone else’s way. If you’re lucky enough to be in a band where everyone thinks that way, you’ll be unstoppable. But the main thing I’ve learned from R&B is that I can’t dance! 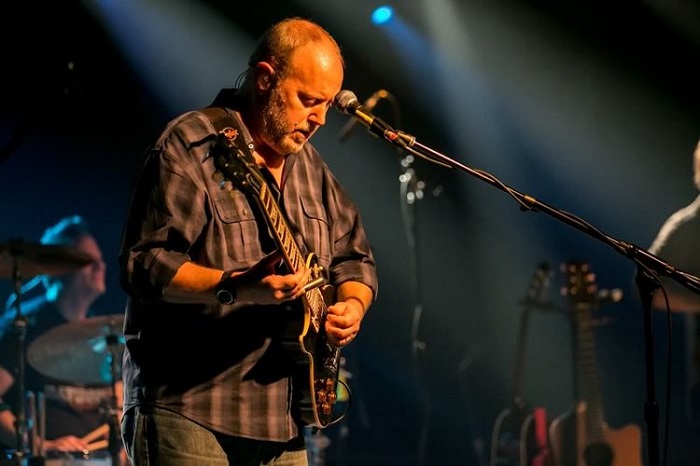 "My fear for the future is that people will stop exploring and developing tastes for different styles of music. I hope people never stop checking out their favorite artist’s influences and digging deeper."

How do you describe Bill Hinds sound and songbook? What characterize your music philosophy?

I’m not sure I have a “sound”. The studio dates I’ve done taught me to be a bit of a chameleon, adapting my tone and approach to whatever the song, artist, or record requires. And I’ve played just about every kind of music you can think of throughout my career, so my sound changes all the time. The primary focus for me is to support the song and, if there is one, the singer. That’s the main thing the studio, and playing with Paul Thorn, has taught me. It’s rarely about me as a player and I love sitting back and grooving with a rhythm section, so it works out for me. But when it’s time for me to step out and solo, melody is king. I try to stay away from playing “licks”. I try to create a melody you can sing or whistle while keeping it fresh and interesting, hopefully. Music is just rhythm, melody, and harmony, but there are an infinite number of ways to make those things interesting. I love hearing what I’ve never heard before. I love music that surprises.

My current employer, Paul Thorn and his production/songwriting partner Billy Maddox, have been pretty instrumental in my learning to play for the song. They are great songwriters and we are all very careful that the lyric and vocal are the main focus. And there’s a keyboard player that no one knows about named Steve Nathan that was in Muscle Shoals when I was there. I learned more about underplaying and arranging from him than any one, just a fantastic musician. He went on to Nashville and a very successful career there. And I have to mention my Mom. She was a classical pipe organist, so I was infused with the European classical tradition from an early age. The best advice I ever got was to just play, play, play, and try to play with musicians better than me, which was never a problem! (laughs) And to never be afraid of silence, the most important musical component. 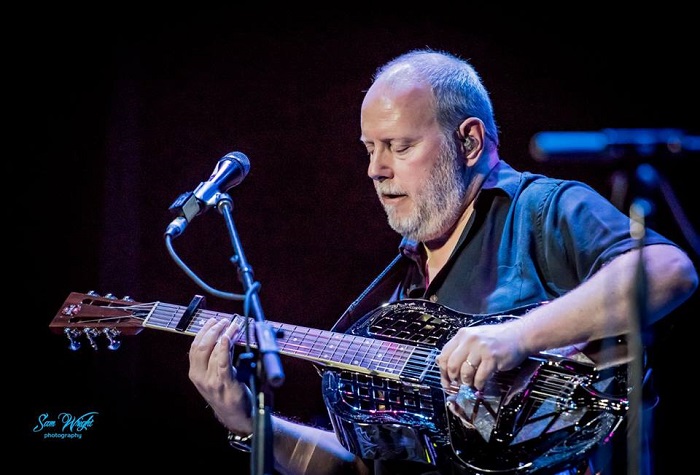 "The blues, at its core, is a direct connection between the human heart, the chosen instrument, and the listener’s heart. It’s a sharing of the joy, sadness, anger, and grief of the experience of living." (Bill Hinds & his tricone resophonic / Photo by Sam Wright)

Are there any memories from Roy Orbison, Johnny Taylor, and Denise LaSalle which you’d like to share with us?

I was pretty young when I worked on the Orbison record, but I remember him as being a very kind and sweet man. He went out of his way to make me feel comfortable, which he didn’t have to do. I was pretty star-struck, and after telling me a James Burton story I guess he sensed my nervousness and said “…and you belong here too, you know”. I was suddenly 10 feet tall! I never actually met Johnny Taylor, I was just called in for overdubs and he wasn’t there, but Denise Lasalle was a blast! So funny and a little naughty! I loved working with her.

I miss better radio. It used to be that you could actually discover good music on the radio. Now it’s all the same bubblegum. And there’s not much blood and sweat in music these days. My fear for the future is that people will stop exploring and developing tastes for different styles of music. I hope people never stop checking out their favorite artist’s influences and digging deeper. 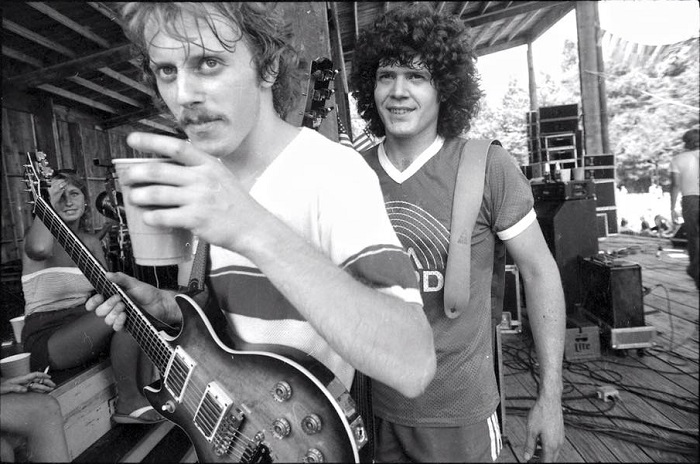 "I might like to witness one of Jimi Hendrix’s Electric Ladyland recording sessions, just to check out his method. Or maybe I’d go back to the day I quit school to play the guitar and suggest a Plan B!" (Bill Hinds and Kelvin Holly back in '82 / Photo by Kevin Glackmeyer)

Well, the Muscle Shoals movie didn’t hurt. And I think people are realizing that it was just good music played and sung by really soulful people. There will always be an interest in music played with passion, which is why music made during seemingly magical points in time in places like Detroit, Memphis, Chicago, Philadelphia, Muscle Shoals, etc, will always be meaningful.

Why Muscle Shoals was a Mecca of musicians? What touched (emotionally) you from the local music circuits?

There’s just something magical about the area, a really nice, relaxed spirit. The R&B coming out of Memphis trickled down and mixed with the Country & Western influence of North Alabama and a handful of players blossomed. Rick Hall had the ears, acumen, and perseverance to grow it and make it successful. And it flourished. And, being kind of a small scene, it was relatively easy for a musician to prove himself and get work. Interestingly, there wasn’t much of a live scene around it, but there was a healthy live scene in Montgomery, Alabama, where I grew up and played clubs. I was heavily into Duane Allman and learned he was a session player in Shoals for a while. When I was 15 I heard Boz Scaggs’ “Loan Me A Dime”, an unbelievable track from his 2nd album that featured Allman. If you’ve never heard it you should check it out.  It blew me away and I decided then and there that Shoals was where I wanted to go.

What is the impact of Rhythm & Blues and Rock n’ Roll music and culture to the racial and socio-cultural implications? 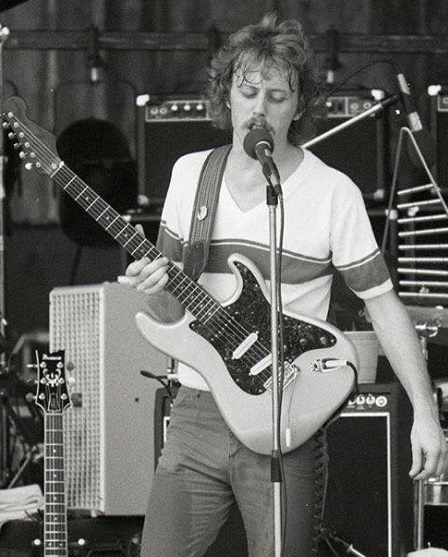 Without delving too deeply into what was a very complicated time, I will say that the Muscle Shoals music scene of the 60s might have been the only place in Alabama where there was true racial integration. White artists, black artists, white musicians, black musicians all working and playing together with no regard to cultural difference. And I think the R&B and Soul music of the 60s inspired white kids’ interest in black culture and helped pave the way for many of them fighting arm-in-arm with African-Americans for civil rights.

I might like to witness one of Jimi Hendrix’s Electric Ladyland recording sessions, just to check out his method. Or maybe I’d go back to the day I quit school to play the guitar and suggest a Plan B!