Albie Donnelly is a singer/saxophonist and bandleader began his career in London as a session musician playing on recordings by Bob Geldof and the Boomtown Rats, Graham Parker and many others. In 1973 he formed the now legendary band SUPERCHARGE. The band’s blend of R. ‘n’ B. and Funk plus their wild on- (and off!) stage-show made them a sensation on the British 70’s live- club scene.

In the 80’s the band signed with Virgin Records and toured extensively in GB and all over Europe with such names as Ray Charles, Fats Domino, B.B.King, Chuck Berry and Queen – culminating in the Hyde Park concert in front of more than 100,000 people.

His soulful voice and unique horn-sound attest to his R‘n’B roots and his being steeped in the music of the all-time greats.

Since 1992 Albie is doing some solo records as well and published his first solo album „The Spirit In Me“ which contains a selection of some personal favourite songs.

This record is to be regarded kind of biographic. Beside his own songs one can find tunes of Albie’s favourite musicians like Charles Brown, Duke Ellington and more.

But that’s not all!

For more than 10 years a saxophone workshop book “Sax Tricks & Rock ’n’ Roll” written by Albie Donnelly is available. Aiming at the R&B sax-player it not only shows useful tricks and playing techniques but tells a lot of entertaining anecdotes of Albie Donnelly’s musical life.

In 1993 Albie recorded with the Supercharge horn-section a sampling CD/CD Rom for professional studio work. Worldwide distributed as “Albie Donnelly’s Killerhorns I&II” this sampler got the best reviews among experts

Of course Albie Donnelly is available as special guest to support other bands with his fantastic saxophone sound, too.

Albie,  when was your first desire to become involved in the music?

When I heard Elvis Presly

B.B.King, Queen, Ray Charles, Fats Domino, I Have recorded with Bob Geldof, Graham Parker, The Boomtown Rats, Helloween and some even stranger bands

Mutt Lange produced 3 Lp,s for Supercharge and I did many sessions for him, he is the most successful record producer ever so it doesn’t get much better than that 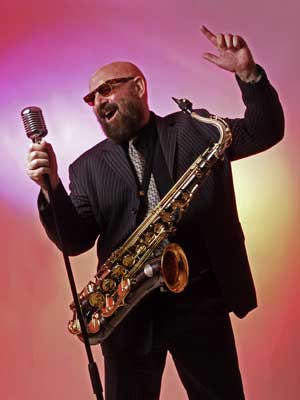 Freedom not to work in a factory

I,m always pretty Happy and content to blow those blues away

Most of them buy dumb music made by dumb fools,and think Britney Spears Lives on the Moon,, so if they like Blues they are keeping it very Quiet

How is your relationship with BB King

Well, he,s the King and I,m one of his loyal subjects?

NOW because I,m Still Not Dead, and so many, more than I can count Are

By nature I,ve always tried to help fellow musicians, and by nature most musicians forget everthing

Who say,s we got more brains, all Gods Chillen got soul

Why do you play SAX?

You don’t have to plug it in

What was the first gig you ever went to see?

I wish People had more chance to hear it and all the so called Superstars would shut the fuck up !!!!

Amix of soul ,blues and jazz, definitely NO Coldplay or Whiteboy Indie Pop, Oasis or other so called Really great stuff...its all re-hashed Tripe

When did you last laughing and why?

Reading some these questions and looking at my answers

Why did he think that Supercharge continued to generate such a devoted following?

We aint no Popstars

We started in my hometown Liverpool, we decided to play what we liked,and thankfully the public liked it too and that is how its stayed, no World domination, but I do what I like and that means more to me than being a member of some highly successful band of deluded spandex wearing clowns (Guns and Roses) 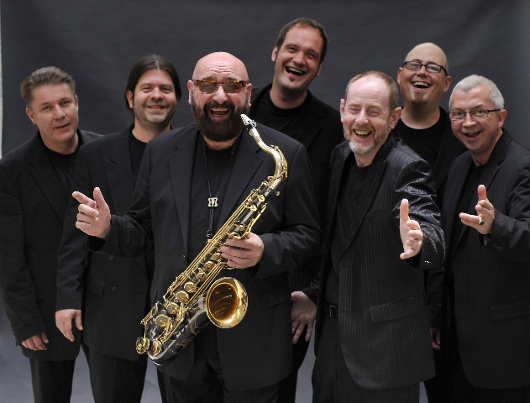 How did you choose this name?

I didn’t choose, I wanted to call the band HOT DICK

He was being very kind lots of good bands out there

What was your relationship the period when you were not all together?

Describe the ideal band to you?

Has treatment made your life easier

No I still go to the Funny farm on a regular basis?

I was never meant to be a Policeman

Tell me about meeting with Fats Domino

He cooked the pigs feet I ate them

What would you ask of JT Brown?

What made you want to work with Lady Gaga?

She gave me her nose flute

What gift would you had given to Charles Brown

What would you had given to Louis Jordan?

Its got worse, with bigger idiots in charge of dumber musicians playing second and third rate Dittys to an audience of bed wetters

Get a real vocalist for the ROLLING STONES

I prefer the ones of yesterday, Muddy, Albert, T-Bone, etc, etc

Who were your mentors in songwriting?

Don’t have any, I just make it up,maybe that’s why the songs sound a bit weird sometimes

Tell me a few things about your project with Greg Barrett

He sings and plays really well and I Help him out.