Alvin Lee of Ten Years After Dead at 68 - Goodbye my friend...R.I.P

British blues rock great Alvin Lee, a guitarist and singer whose scorching performance at Woodstock propelled his band Ten Years After to wide fame, died on Wednesday of "unforeseen complications" from a routine surgery, family members announced on his website. He was 68.

Great guy he will be sadly missed by everyone that knew him. Ten Years After's bassist Leo Lyons called Lee the "closest thing I had to a brother" and said he was in shock upon hearing of the guitarist's death. 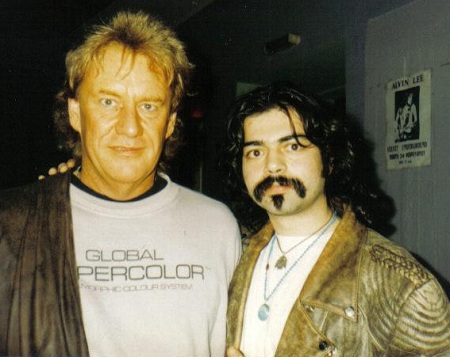 Alvin Lee (born Graham Alvin Barnes, 19 December 1944, Nottingham, England) was a legendary figure of rock and blues music. He began playing guitar at the age of 13, and with Leo Lyons formed the core of the band Ten Years After in 1960. Influenced by his parents' collection of jazz and blues records, it was the advent of rock and roll that sparked his interest, and guitarists such as Chuck Berry and Scotty Moore provided his inspiration.

Like many of their peers in the late '60s and early '70s, the band found more success with their albums. The band logged 12 entries on the Billboard 200 chart, including five top 40 albums: "SSSSH", "Cricklewood Green", "Watt", "A Space in Time"  and "Recorded Live".

Lee worked with The Beatles' George Harrison, Steve Winwood, Ronnie Wood and Mick Fleetwood on his first solo album, On the Road to Freedom, in 1973.

He released his 14th record, Still on the Road to Freedom, in August last year. He was due to play a concert at Olympia Hall in Paris on 7 April with blues guitarist Johnny Winter.