"Both music and literature have triggered and influenced many an idea. I reference those two art forms in much of my work, often a touch too esoterically perhaps but, as I said, I need to please myself. One doesn’t want to be too obvious."

Jim Siergey is an American cartoonist started his career as a freelance cartoonist in the early 1980s. With Tom Roberts, he created the long-running comic strip "Cultural Jet Lag" which appeared in many alternative press publications. Cultural Jet Lag also appeared as a regular feature in Time magazine from 1997-2001. The strip also had a run as a regular feature in USA Weekend Sunday magazine. Cultural Jet Lag dealt with high and low culture with no regard for time and space. Fantagraphics Books published a "Cultural Jet Lag" comic book collection in 1991. Siergey was also active in the mini-comic "newave" movement of the 1980s, known for his series of "nart" books that dealt with surrealism and puns. He is featured prominently in "Newave", a hardbound historical look and collection of comics from that period, also published by Fantagraphics. As an animator, he worked on many commercials as well as educational and industrial films in the 1980s and 90s. 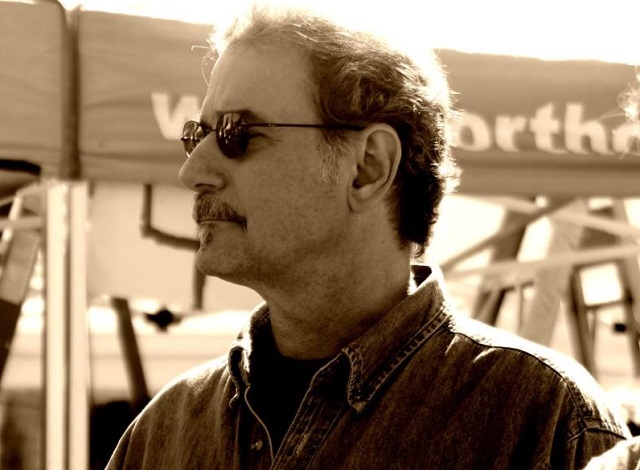 Jim Siergey says: “I have been a freelance artist since the 1980s, in both cartoon illustration and animation. I work and play well with others. I love collaboration. I am also adept at taking a concept and molding it into something unique. In the field of cartoon illustration, I have written and drawn a comic strip that has seen print in hundreds of various types of publications. I wrote and drew a regular feature for both Time magazine and USA Weekend. I have done cartoon illustrations for books, magazines, periodicals, pamphlets, invitations---just about any type of printed matter. In the field of animation, I have done character animation as well as designed characters, storyboards and worked on scripts. I have overseen animation projects. I would love to continue doing work in both of these fields. I am available for concept, design and execution of a variety of projects---from the personal to the professional. No job is too large or too small. They're all "just right".”

Wow. I’ve given little thought to what triggers my ideas. I’m just glad that one comes along now and then. I was brought up to be a polite boy. I don’t ask from where gifts have come. Something I’ve read in a newspaper, magazine or online will trigger an idea. Something overheard. A movie, an old TV show, something that happened to me, an incident or tale regaled to me. A bolt out of the blue a la Minerva bursting forth from the forehead of Zeus, not that I wish to compare myself with a Roman god. Oft times, just doodling in a daze.

What characterizes your comix philosophy?

Draw what pleases you. You can’t please everyone so please yourself. It’s bound to please some other people. Since cartooning is such an isolated endeavor, it may take a long time before you discover that there actually are other people being pleased but that shouldn’t stop you. A’course, if you’ve been hired to perform a project, first and foremost you have to please your client. Even then, I always try to please myself as well. Otherwise, it’s just work. 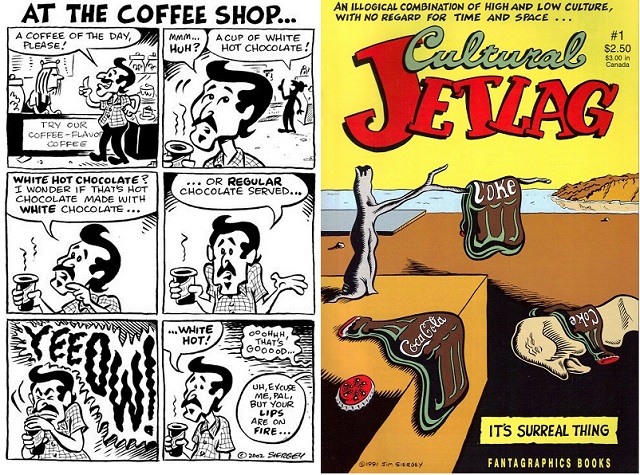 "The possible death of print is a fear. The tactile pleasure of holding a book, magazine or newspaper is something I would miss and is a subtle sensation I would like future generations to experience." (Artwork © by Jim Siergey)

What has been the relationship between music and literature in your life and art? How does it affect your inspiration?

They are both very important. In many ways, they are life. It is important that one gets exposed to art and literature when very young. It becomes part of you. As you grow and change, your tastes and interests may change and expand, but you never forget what first grabbed hold of you. It becomes part of what helped make you who you’ve become. Earlier, you asked about what triggers ideas. Both music and literature have triggered and influenced many an idea. I reference those two art forms in much of my work, often a touch too esoterically perhaps but, as I said, I need to please myself. One doesn’t want to be too obvious.

As a youth I was fortunate to have a few friends who were also creative goofballs. It certainly made me feel less isolated than I probably would have felt otherwise. Thus, music, writing, drawing, wordplay and humor were as much of a pastime while growing up as any physical activity. In my early twenties I made the acquaintance of Jay Lynch, one of the trailblazers of Underground Comix. Before meeting Jay, the thought of making a living though drawing had never occurred to me. He was the first professional artist I had ever met and from that meeting, a little light was lit in the back of my brain telling me that a job did not have to be some 9-5 grind doing something you weren’t particularly happy doing. I also learned a lot about technique and history from Jay so I’d have to place that as a turning point in my life.
A couple of years after that, Jay introduced me to Clay Geerdes out in California. He was a photographer, journalist, teacher and cartoonist smack in the middle of the underground comix and social movement of the times out in Berkeley and the Bay Area. He was writing a newsletter about the comix scene. We developed a letter writing relationship and I submitted cartoons to his newsletters and mini-comix. Clay is considered the godfather of the mini-comix movement. He urged everyone to “print your own”. Thus, I learned a lot about how things looked in print and also developed several new relationships with other burgeoning cartoonists, many of whom I am still in touch with to this day. Clay gave me a lot of ego-boosting and opportunity to test and expand the talents I had. I’ve been fortunate to have had some other meetings that affected my life in a positive way but meeting Jay and Clay were the two comic-related encounters that helped bring direction to my meandering career path.

I know I’ve been given lots of advice, i.e. “What you wanna do is…” but nothing pops out as the best advice I was ever given. Close the door behind you, turn off the light when you leave a room, don’t talk with your mouth full, use your turn signals…these are all fine examples of sound advice. 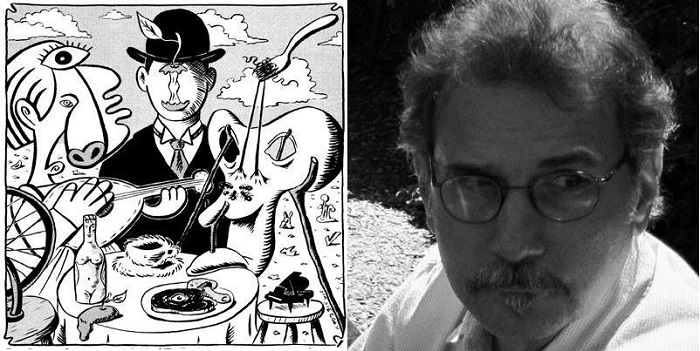 "One can certainly fantasize about going back in time to different eras until one really thinks about it---the diseases, the racism, sexism and other bits of savagery that we have mostly overcome in this modern era would be present and rampantly so." (Artwork © by Jim Siergey)

What are your hopes and fears for the future of comics? What do you miss most nowadays from the comix of the past?

The possible death of print is a fear. The tactile pleasure of holding a book, magazine or newspaper is something I would miss and is a subtle sensation I would like future generations to experience. Personally, I don’t think print will disappear, at least not for the foreseeable future but electronica has certainly taken a foothold, hasn’t it?
What I miss most is the size of comics. They have been shrunk so small that they can be printed on postage stamps, speaking of something else doomed for history’s dustbin.When I was a kid, each panel was as big as a dinnerplate! A-course, I was a lot smaller back then.

What has made you laugh lately and what touched (emotionally) you from the nowadays comics artists?

I regretfully admit, I’m not as up on what’s around these days. I haven’t been to a comic store in ages. I avoid them because I would want to buy too much stuff and I can’t afford it, monetarily or spacewise. Mostly, I get my comics fix from the daily newspaper although I still keep an eye on some of what’s going on in the Alternative Press as well. There are various strips that will cause me to emit an audible guffaw as well as a poignant pause. I hesitate to begin naming names because once I do, it will become a conga line into infinity so I shall stop the music right here.

What do you learn about yourself from the underground comic culture and what does counterculture mean to you?

What I learned from underground comix as well as the Kurtzman/ Elder/ Davis/et al. MAD comics from my youth, is that everything is up for grabs. Trust no one. Nothing and no one is above satire, including oneself so don’t take yourself too seriously, fella.
The term ‘counterculture’ was originally attributed to people who were fed up with societal restaints, people who felt there must be a better way to live one’s life than the way it had been for ages. 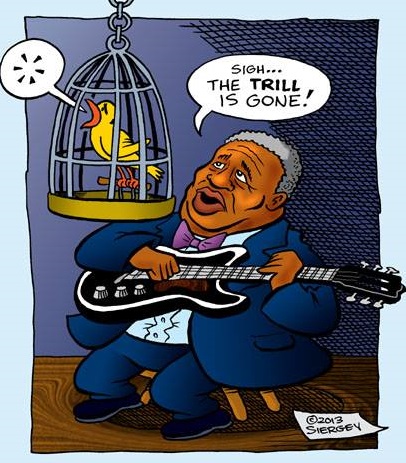 Less toeing of the line and more freedom but, in pursuit of that, it has been forgotten that freedom is not a license for chaos. I was part of the hippie generation and those beliefs of equality and peace and love and all that shit are still standards to live up to and I do my best to follow a righteous road. Without getting all Paul Anka on you, I’ve tried to live my life my way but the concept of ‘compromise’ is something one cannot totally shun. Yes, I used the dreaded C word. Well, one of ‘em anyway. We all have to compromise to some degree. Balance, baby, balance. A’course, one must be careful not to compromise to the point that one finds oneself ‘selling out’ or ‘drinking the Kool-Aid’ no matter who’s mixing it or, on the other extreme, un-compromising to the point where one feels one must resort to terrorist activities. Pick your fights, man. Despite what Donald Trump promotes, one can’t be a winner all the time. Don’t give up but try to find some middle ground. Live free without dying.

Spending a day with Mr. Happy would drive me crazy. He is too hyper, too rosy-lensed, too everything. I’d end up cowering in a cold sweat in a dark corner somewhere or else running away over the horizon, arms waving frantically and screaming like a madman. Not given either of those options, I’d have to opt for splitting his head open with an axe handle. I’d ask Nancy for an introduction to Aunt Fritzi, natch. Babe Ruth? I guess I’d ask if I could accompany on him on one of his nights on the town. I wouldn’t be able to keep up with him, but it’d be an interesting half-experience.

Where would you really want to go via a time machine and what memorabilia (books, records) would you put in?

One can certainly fantasize about going back in time to different eras until one really thinks about it---the diseases, the racism, sexism and other bits of savagery that we have mostly overcome in this modern era would be present and rampantly so. That said, like the protaganist in the old song “Civilization” who sings “Bongo, Bongo, Bongo, I don’t want to leave the Congo”, I’ll stay right here. Books and records I’d like to keep with me, hmmm, how can I winnow it down? “Cat’s Cradle” by Kurt Vonnegut, “Oryx & Crake” by Margaret Atwood, “Gulliver’s Travels” by Jonathon Swift...Some Beckett, some Twain, some Kim Deitch, oh, man, this is too hard. Music---Satie, Zevon, Dylan, Coltrane, Monk, Jenny Lewis, the Bonzos, Ella…