"I believe in doing great music and there is a lot of it that has been dome.  It is timeless and will be enjoyed by people who were born long after the artists have left us.  People still listen to Joplin and Hendrix."

Norman "The Blues Doc" Cohen: On The Road Again

American Norman Cohen’s life story sounds like the theme of a Hollywood movie. Norman, a 63-year-old man who supports himself by playing blues and rock music on the streets in Israel, Tenerife, Estonia, and Berlin who no one would guess used to be a prominent physician in Florida. Known simply as The Blues Doc to his many friends and acquaintances, Cohen was a board-certified gynecologist and obstetrician who later became a nationally and internationally recognized specialist and teacher in the field of clinic-based cosmetic procedures, particularly dealing with varicose veins. He had his own clinic in the city of Jacksonville, Florida, as well as all the comforts that a person of his profession usually provides for himself and family, including a home in an upscale neighborhood, nice cars, a boat and a vacation cottage near Daytona Beach. Cohen recounts his life in a book he has written about his tribulations entitled The Botox Bandit, in which he relates how he lost his medical practice by becoming involved with a number of other American doctors in acquiring and dispensing a form of the Botox cosmetic drug that was not authorized by US medical authorities.

Cohen’s guitar playing is an art in itself. He began playing as a hobby in his teens; and had he pursued a musical career instead of studying to be doctor, he might have made it big in America’s tough and challenging entertainment world.

The Blues Doc plays mostly music from the ‘60s and early to mid ‘70s including all kinds of blues, soul music and classic rock and roll. His musical repertoire includes songs by Elvis, Hendrix, Clapton and also many blues artists.

Best way to express my feelings and bare my soul to others.

How do you describe Norman Cohen sound and progress, what characterize Blues Doc’s philosophy?

I have my own style not far from traditional but not copying any others though I have many influences. "I don’t find many new things destined to be classics.  There is also less originality. It’s all been done before. No one can beat the Allman Brothers of the 70’s for precision and originality." Photo: The Blues Doc and The Holy Smoke

Best and worst moments were the same.  My world came crashing down in 2005 and it led through 2 years of hell that caused me to start a new life filled with music, magical moments a new start and no stress.

Growing all the time and very universal.

Was asked to jam at a remote kibbutz in Israel.  Had about 7 musicians.  It was like big band soiund.  Also in Tenerife I was often joined by great street musicians on guitar and harmonica – all memorable and great fun.   Best gig- Shablul in Tel Aviv – very high end stage.  Also Spiecher’s in Berlin – oldest blues bar. Do you remember anything funny from the streets with the blues?

Plenty of great stories.  I was wearing a small hat and also had a money hat for collection on the street.  A little boy ran to me and threw money on my head.  It surprised me.  I looked at his mom and we both started laughing as I said “wrong hat.”

Make an account of the case of the blues in Israel. What are the differences between Israeli and American scene?

Great musicians and players here.  Too much talent but many have accents even though slight.  In general world class artists modeled after the great American and British players.  Everything from Delta blues to electric.

What do you miss most nowadays from the blues rock of past?

Seems to me most opf the great songs have been written.  I don’t find many new things destined to be classics.  There is also less originality.  It’s all been done before.  No one can beat the Allman Brothers of the 70’s for precision and originality.  Where we gonna find another Stevie Ray or Gary Moore?

What are your hopes and fears for the future of music? Do you believe in the existence of real blues nowadays?

As I said, I believe in doing great music and there is a lot of it that has been dome.  It is timeless and will be enjoyed by people who were born long after the artists have left us.  People still listen to Joplin and Hendrix. 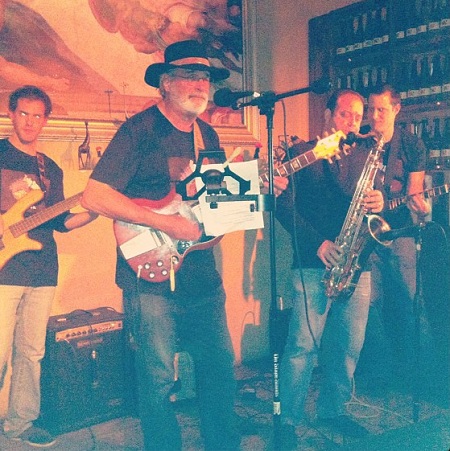 It’s the notes, not the speed or technical ability.

"The Blues is the best way to express my feelings and bare my soul to others."

I find humor in many things and I am a ball of emotions based on many personal tragedies including failing health and the loss of the love of my daughters.

How started the thought of The Botox Bandit? What is the relation between music and activism?

The Botox Bandit is my memoirs.  It is about my life including triumphs, tragedies and how I ended up on the streets playing music after being a doctor for 34 years.   It why I am who I am.

I would like to spend a day fishing with my father.