Interview with British band of Devils Creek: The Blues is not as mainstream, so stays constantly with us

"It’s music that touches your heart, whether you’re happy or sad – I don’t see it as just a melancholy thing – its for everybody."

High octane rocking blues - a solid testament to the enduring power and influence of Blues Rock - especially the variety in which a wailing Fender Stratocaster comes front and centre.
Inspired by the classic guitar-driven blues rock of the late 60's and 70's, Cornish power trio Devils Creek are keeping alive the time honoured traditions first forged by greats such as Rory Gallagher, Ten Years After and Johnny Winter.
Formed in 2006, and fronted by maverick guitarist/vocalist Guy Rosewall, the band features a crack rhythm section in bassist Tim Chapple and drummer Alan Ibbotson. The band have released four albums on their own label (Top of the Hill) 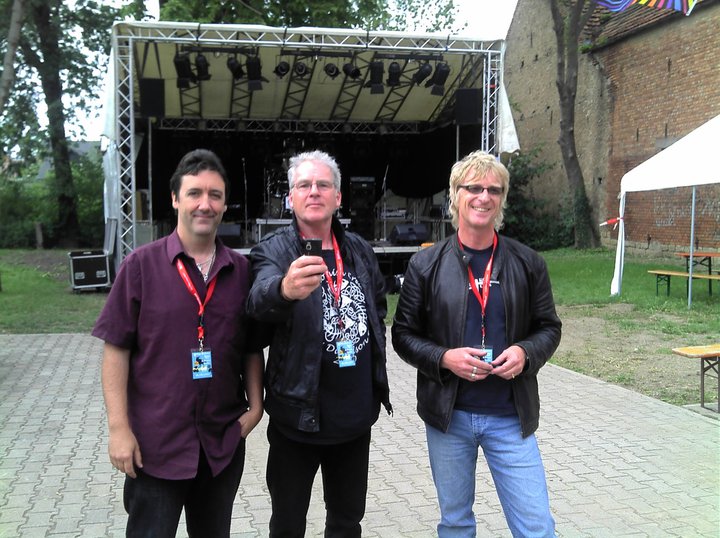 The 2008 debut album "Bullfrog Blues" combined a classic approach with an attack favoured by heavy rock, particularly evident in the ultra heavy bass sound not normally heard in the genre. Featuring a hard driving electric version of Rory Gallagher's "Seven Days" which would surely make the late great Irish guitarist proud, the entire offering is a solid testament to the enduring power and influence of blues inflected rock.

In 2010 saw the release of the bands second album "Working the Chains". The album received a good deal of airplay, including Rick Wakeman's Planet Rock show. The band's album "th3rds" was released in 2011. "Live at the Proms" - a live album recorded at the Acorn Theatre, Penzance was released in January 2012.
The band has gigged solidly since 2006, and gigs included The Welsh International Bike Show, The Bideford Blues Festival, dates in Germany, as well as a multitude of pub/club gigs. The bassist Tim, talk to blues.gr about the Devils Creek and the British Blues...

Tim, when was your first desire to become involved in the blues & who were your first idols?
I first got into the blues listening to Ten Years After and Rory Gallagher back in about 1973, and the worked backwards via Freddie King, John Mayall and Clapton to Robert Johnson.
My first idols blues wise would have been Alvin and Rory!

What was the first gig you ever went to & what were the first songs you learned?
My first proper gig would have been Queen in 1975 – I would have been about 15 – I couldn’t believe how loud it was!
First songs would have been trying to learn folk songs on a very cheap acoustic guitar – Bob Dylan and Woody Guthrie songs. I used to go for lessons every week at a local college. 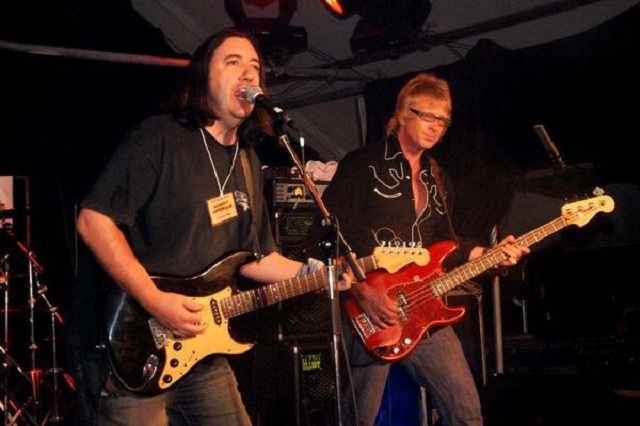 Tell me about the beginning of the Devils Creek, how did you choose the name and where did it start?

I’ve known Guy for a long time, and we’d worked in a couple of bands together when we were younger – it’s a fairly small friendly scene down here in Cornwall. W e were both ready for a new project back in 2006 – we share a passion for Blues and Rock and it all just fell into place very quickly – we were out playing live after a handful of rehearsals, along with our original drummer Terry Brown, and we worked up new material between gigs.
Guy came up with the name – we were almost named the “Hickory Devils”, but settled on Devils Creek as the better of the two suggestions! Band Names are always hard to agree on  - it’s too late to change it now!

What characterizes the sound of Devils Creek?
I think that Devils Creek is a melting pot of influences spewed out in a particularly individual style. Guy’s main influences would be Hendrix and Clapton era Bluesbreakers, alongside 80’s metal guitar players like Eddie Van Halen, which have resulted in a very brutal fast playing style with spectacular solo work.
A lot of traditionalists dislike this modern take on the blues, but it makes us different from a lot of the other bands out there.
Alan Ibbotson on drums is heavily influenced by jazz and rock, and not afraid to experiment live, which makes for an exciting performance – his trademark double hi-hat setup means that he’s always changing the groove of the song, and working around the beat.
I just try and hold it all down bass wise, and lock it all together – a challenging task at times!   - my influences are hard-driving bassists like Gerry Mc Avoy – and I cover almost a rhythm guitar role on bass.
Al tends to push the beat forward, while Guy and I naturally play slightly behind the beat -  It’s a very weird dynamic – I’ve never played in a band quite like it before, but thank goodness it seems to work!

Any comments about your experiences with your partners GUY and ALAN?
After all this time we are now like a family really – lots of ups and downs but we are very close. An interesting mix of personalities – Alan is one of the most enthusiastic and positive people I know, and keeps us motivated when things get tough. Guy is an inspirational musician to work with, and I feel very fortunate to be part of “The Creek” 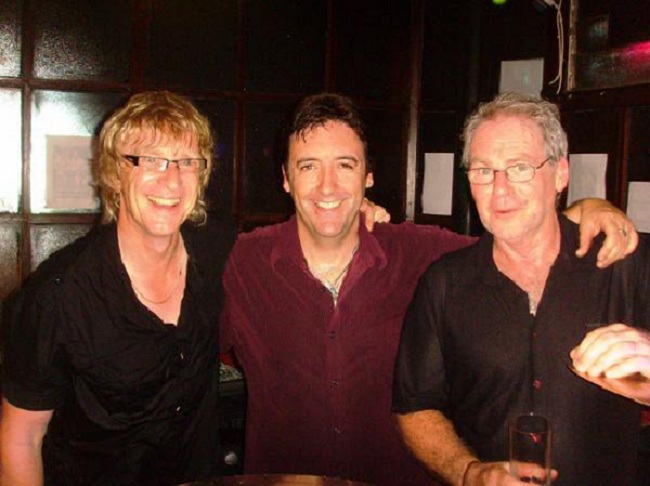 Which was the best moment of your career and which was the worst?
Best moments would be playing in Germany this year, and the album getting airplay on Planet Rock – it’s a weird sensation hearing yourself on the radio!.
To be honest there’s nothing really bad to report – the traveling and late nights take their toll on us all, but I can’t imagine ever giving it up – I love it and feel very fortunate to be out there still rocking after all these years.

How/where do you get inspiration for your songs & who were your mentors in songwriting?
Guy is a great songwriter  - lots of things influence the songs – Money, Women, Relationships – things that affect everybody, and that everyone can relate to.
Influences come from everywhere – too numerous to list!
I think our way is to keep the playing understated – not over play and let the song shine through.

Any of blues standards have any real personal feelings for you & what are some of your favorite?
I love anything with a driving beat, so always enjoy covering Rory Gallagher material – and is there a better song than “A Million Miles Away”?

I’m not a trained musician – my music theory knowledge is limited, and I have a terrible technique! – definitely heart and soul.

It’s music that touches your heart, whether you’re happy or sad – I don’t see it as just a melancholy thing – its for everybody.

What experiences in your life make you a GOOD musician?
Working with other people, and learning all the time. 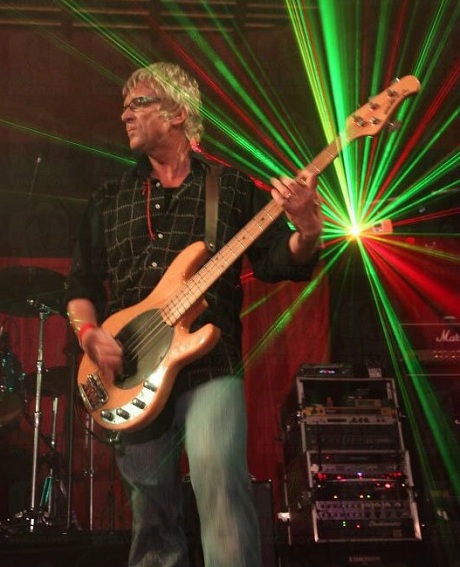 Just lots of arguments – it was like having three producers!

What are some of the most memorable gigs you've had?
Festival dates in Germany this year – the response was fantastic and they treated us really well.

Are there any memories from local bars, which you’d like to share with us?
Lots of Bars have no stage, so you are very close to your audience – you learn to get tough and very thick skinned.

Which of historical blues personalities would you like to meet?
Rory Gallagher

We did a gig last week where Guy got lost traveling to the venue, and Al got the date wrong and had to race to the gig at 100 miles an hour – must be our age!
We still set up in time and played a great gig though, and had a good laugh about it afterwards.

Of all the BLUES people you’ve meeting with, who do you admire the most?
We met Paul Batto Jr in Germany while on tour – an absolute professional!

What do you think is the main characteristic of you personality that made you a musician?
Lol – I wanted to impress girls. 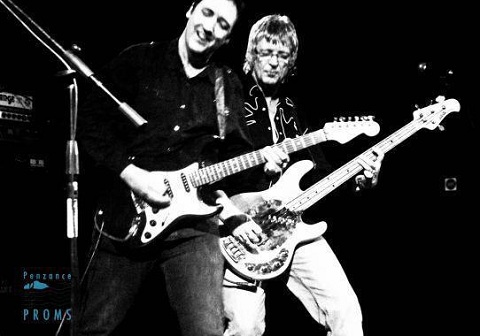 What was the last record you bought and enjoy?
Currently very much enjoying the new Leslie West album.

Some music styles can be fads but the blues is always with us.  Why do think that is?
Its not as mainstream, so stays constantly with us

How do you see the future of blues music? Give one wish for the BLUES
I want to see the Blues develop and progress, and not become the property of the traditionalists.

What do you think of UK BLUES music & how close are to the US BLUES?
Both have strong scenes – I love the groove and feel of the US Bands

What is the “think” you miss most today from the ‘60s UK BLUES?
The level of musicianship was very high then – lots of guys came out of the jazz scene, and had the most incredible level of chops and the ability to improvise.

When it all began for the blues in UK? Which is the most interesting period of UK blues & why?
I reckon Alexis Korner and John Mayall pretty much started it all….. my favourite period would have to be the late sixties / early seventies – bands like Taste, Stan Webb’s Chicken Shack, Ten Years After.

What characterizes the sound of local blues scene? Who is considered the "godfather" of the UK blues?
The local scene here is a little polite and safe – needs a kick up the arse! – I’d go for John Mayall as “godfather” of Brit Blues. 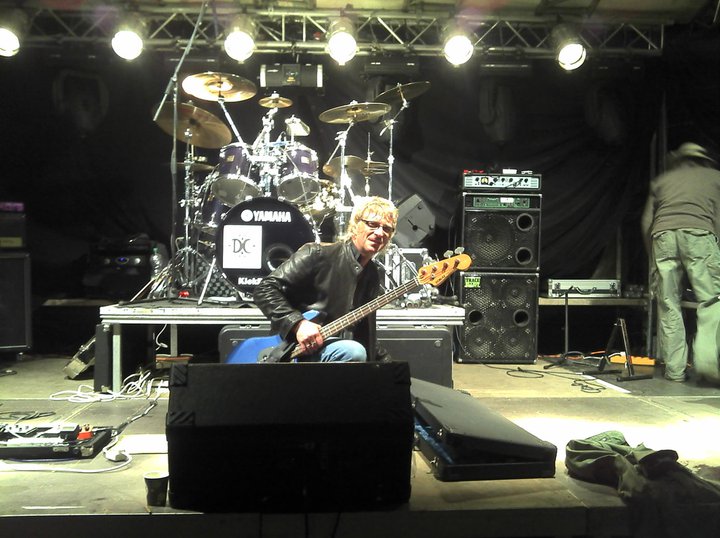 What would you had given to Rory? What would you ask Alvin Lee?
I’d love to ask Rory how he managed to stay so focused on his music right to the end.
I’d ask Alvin to get a blues band together real soon, and ask him if we could do the tour support slot – that would be heaven!

What are your plans for the future? Do you have a message for the Creek fans?
Hope to play more European dates very soon – in the meantime you can find us on –