An Interview with Chicago blues band of Howard & the White Boys: Blues is a state of mind. It is not really about skin color.

"The Blues is just about being real.  You have to be real to the music and to yourself or it just does not work." (Howard McCullum)

The members of Howard & the White Boys first met at Northern Illinois University in Dekalb in 1988 and began jamming together just for fun, but their fast-growing popularity soon convinced them they could make a career of it. After only a few months, they got their first big break by opening for B.B. King. The band soon made the move to Chicago and began performing with the biggest names in blues: Koko Taylor, Albert King, Junior Wells, Lonnie Brooks, Luther Allison, Bo Diddley, and Chuck Berry. 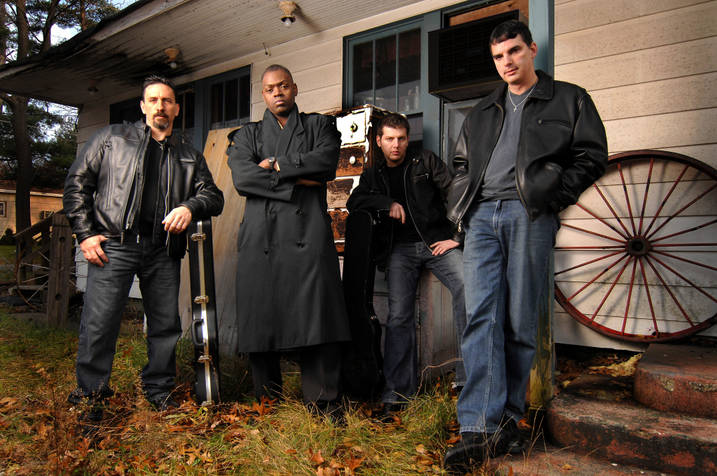 Between 1994 and 1997, the group made two highly acclaimed recordings, “Strung Out On The Blues and Guess Who’s Coming To Dinner?”.  They began traveling extensively across the United States and their growing popularity captured the attention of Philadelphia based Evidence Records. “The Big $core” was the first of two successful discs released by Evidence, and the band wasted no time in promoting it via the first of many trips to Europe. Riding the ever-growing wave of popularity both at home and abroad, the group then released a well-received “Live At Chord On Blues” in 2000.
In 2004, long time band members Howard McCullum (Vocals, Bass Guitar), Rocco Calipari (Guitars), and Jim Christopulos (Drums) were joined by 26 year old guitarist Pete Galanis.

Let's talk about the blues with Howard McCullum and Rocco Calipari...

When was your first desire to become involved in the blues?
Howard: I have loved blues music all of my life.  Growing up in Mississippi made me very familiar with the music.

Rocco: In the late 70's I was watching the show Soundstage on television the rock band Journey was on and they had Albert King, Luther Allison and Jerry Portnoy(harp) as guest and they stole the show.

Who were your first idols? What have been some of your musical influences?
Howard: I always go back to B.B. King,  Muddy Waters and Buddy Guy.  Their styles always inspired me. 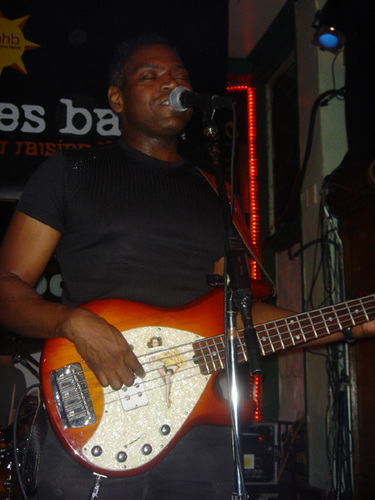 Which of the people you have worked with do you consider the best?
Howard: We have worked with so many amazing artists.  It would be impossible to rank one better than the other.  However, we learned a lot from Buddy Guy when we toured with him. It was truly amazing to watch him perform every night!

Which was the best moment of your career and which was the worst?
Howard: The best moment is every time I get a chance to play in front of an audience who came to see us.  It is a great feeling having that connection during performance.

Is there any similarity between the blues today and the blues of the ‘80s - ‘90s?
Howard: I think that it is difficult to compare blues from different eras.  There will always be a common thread that runs through the music.  Technological advances may alter the sound.  Individuals may influence new generations of players.  Yet, the core of the music will be the same.

Do you have a message for the Greek fans?
Howard: I have never been to Greece but, I am looking forward to meeting all of those Greek blues fans!

What does the BLUES mean to you?
Howard: The Blues is just about being real.  You have to be real to the music and to yourself or it just does not work.

Rocco: All of the music I love starts with the Blues, it has given me a good living and taken me to places I would not have seen otherwise. 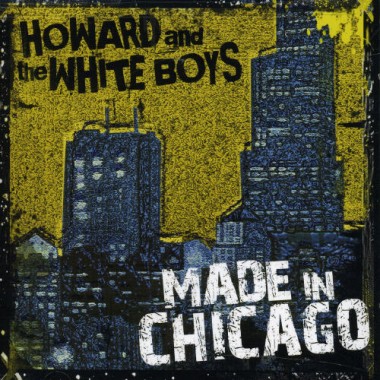 Which of your work would you consider to be the best?
Howard: I like all of our recordings for different reasons.  However, I think our last cd “Made in Chicago” comes the closet to capturing the true nature of our sound.

Rocco: It's hard to pick a song but I've always liked the solo on the song Judge (The Big Score..HWB).

Howard, how did you first meet & what kind of a guy was Junior Wells?
I did not know Junior very well. We opened for him a couple of time and played with him and Buddy once in an on-stage reunion.  Unfortunately, he passed away before I got a change to work with him more.

How would you describe your contact to people when you are on stage?
Howard: I am pretty laid back on stage.  If I am really feeling it, people can tell.  They also know when I am having a good time.  I just try to communicate through the music and let it do most of the taking

Rocco: I love the feeling of walking on stage it never gets old, even if I've had no sleep the music pumps me up.

What was the first gig you ever went to?
Howard: My first true blues gig was in college.  BB King was playing and it was my first time getting a chance to see him.  To my surprise, it also turned into the first time that I got to meet him and work with him. We ended up being the opening act on that show at the last minute.  We had only been together for about 6 months. Were there any places where you did especially well in Chicago?
Howard: We always did well at Buddy Guy’s Legends.  We were one of the first bands to play there when it opened in the 90’s.

What are some of the memorable gigs you've had?
Howard: There have been a lot of them.  However, I think playing with Chuck Berry an Bo Diddley at the Long Beach Blues Festival it at the top of the list!

Rocco: Our tours with Buddy Guy.

Howard,where did you pick up your bass style & in which songs can someone hear the best of your work?
I started playing bass when I was 14 with my father’s gospel group.  They were called “The Golden Keys.”  A lot of my style is influenced by gospel music.  I also group up listening to 70’s funk and soul.  You can hear all of that in the way that I play.  Again, the production values of “Made in Chicago” enables you to hear all of our playing styles on all of the songs.

Howard, why do you play BASS & what were your favorite bass back then?
Some people come to the bass after first playing the guitar.  I am a bass player.  I would always listen to the bass lines of songs that I heard on the radio.  I never wanted to be a guitar player.  I learned how to play on an old Kay bass.  I still have it but it is virtually unplayable.  The strings feel like they are 10 inches above the fret board. That $60 piece of would is responsible for my career.

Rocco, what does GUITAR mean to you? What were your favorite guitars back then?

Everything. It has been a Huge part of my life I play everday. Fender Strats and Tele's, Gibson 335's.

What are some of your favorite blues standards?
Howard: Mannish Boy, The Thrill is gone  Rocco: Down Home Blues, Sweet 16. Tell me about the beginning of the White Boys. How did you get together and where did it start?
Howard: We met in college.  The band was just going to be a way to meet girls and get free beer. The name was a joke because we never thought that we would play more than a few gigs, graduate from college and get real jobs.  Twenty four years, 5 cds, 35 states, and 12 countries later, we are still here!

From whom have you have learned the most secrets about blues music?
Howard: Buddy Guy.

Howard, what do you think about the white blues musicians & how close are to PURE ORIGINAL BLUES?
Blues is a state of mind.  It is not really about skin color.  Like I said earlier.  It is about being real to the music and to yourself.

Rocco: LISTEN !! Do research to find out what influenced the people you like.

Give one wish for the blues music.
Howard: I hope that the blues continues to thrive, evolve and inspire younger generations. 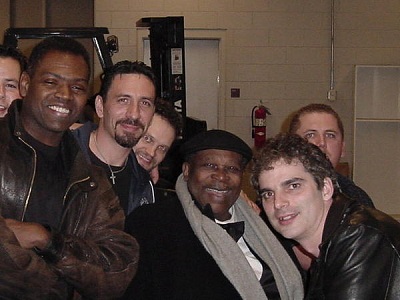 Are there any memories from studio and gigs with all GREAT MUSICIANS, which you’d like to share with us?
Howard: It was pretty cool when Buddy Guy came into the studio and did a duet with me on our 3rd cd, “The Big Score.  Hanging out with BB King in a tiny dressing room while he gave us advice like and old uncle was great.  Backing up Chuck Berry in front of 20, 000 people without ever talking about what songs he was going to play was also pretty wild.

Rocco: There are many but we once opened for B.B KING one of the greatest men you will ever meet. At that time I was Playing a Fender Strat and I asked him to sign my headstock he said he could not because it was not a Gibson but later he did and told me not to tell anyone.

Rocco: I don't know about mistakes but I do miss the days of buying albumns with pictures and art work to look at while you listen. I wish the Blues and Rock-n-Roll were back in the mainstream. 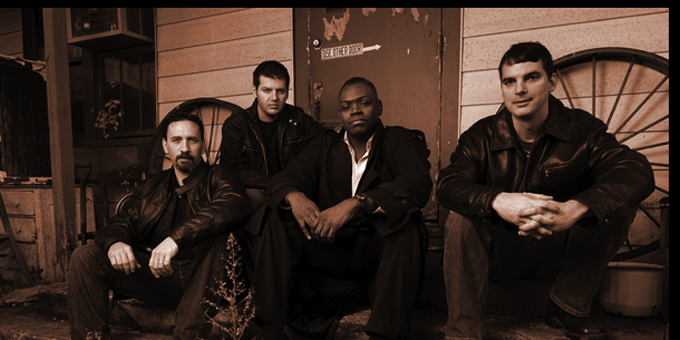