An Interview with Jerry and Pauline Teel of Chicken Snake: Voodoo jungle with a psychedelic snarl 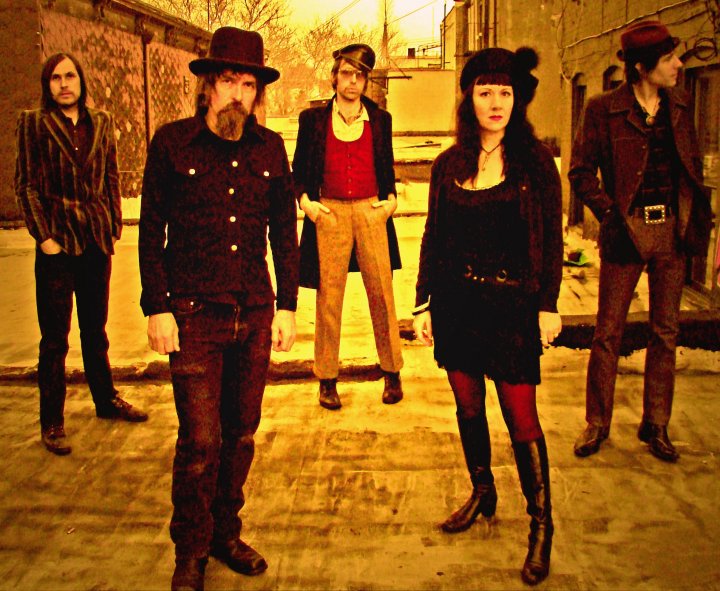 Upon emerging from the banks of the muddy Mississippi, The Teels returned to NYC from New Orleans with many A' tale to tell. Each song reflects a page in their storied history. Tales of true life, love, heartache, murder and poison.
Their debut recording, LUCKY HAND was recorded in 2010, in NYC, and released in Europe by BEAST RECORDS (France). This record included Josh Lee Hooker, Nicholas Ray, Danny Hole, Jack Martin and Bob Bert. Their newest recording TROUBLE ON MY DOORSTEP was recorded in Brooklyn, NY in the late summer of 2011. The Teels along with Josh Lee Hooker, Nicholas Ray and Danny Hole have written a new chapter full of curses and charms, chicken feet and JuJu, devils and saints for your listening pleasure.
Jerry Teel moved from Alabama to NYC with a banjo on his knee in 1980. Soon after, he started his long career playing in many NYC Lower East Side bands.  Jerry owned The Funhouse recording studio on the corner of 4th Street and Ave. B for decades. He recorded, engineered and produced 100's of bands in that space. The Funhouse moved to New Orleans in 2003. Jerry recorded a handful of bands before the Mighty Mississippi took the studio and his home as a dreadful sacrifice. Jerry & Pauline have now settled in the mountains of Virginia. While they add a shot of backwoods moonshine, Josh, Danny and Nick provide filthy, dirty NYC grit to an already boiling pot of deep winding roots, ragged branches to pull you under, blues, whisky and sin. When was your first desire to become involved in the music& who were your first idols?
(J): My first desire to play was in High School. My first idols were The Rolling Stones. The Stones turned me on to Chuck Berry, Bo Diddley, Muddy Waters, Howlin' Wolf. It just went on from there. Later on, The Cramps did the same thing for me.
(P): My first desire to play was when my husband asked me to play. I was always happy being just a fan of music. But, I like making music, and writing songs with Jerry. It's a real fun time.  My first idol was Elvis Presley. My father was a big fan of Sun Studio, so I was raised on cornbread, gumbo and Elvis.

What was the first gig you ever went to & what were the first songs you learned?
(J): The First major gig that left me with a lasting impression was The Stones Exile on Main Street tour. The first song I learned on an acoustic guitar was Dylan's "Visions of Johanna". On electric, The Cramps "Human Fly".
(P): The first gig I ever went to was in my grandparents’ living room. My family would get together every month and just sit around the room with fiddles, banjos, guitars and mason jars full of Wild Turkey. The first song I ever learned on acoustic guitar was "Have you Ever" by the late great Charlie Feathers. (but I was singing from the moment I was born)

What characterize the sound of Chicken Snake? How do you describe Jerry & Pauline's music philosophy?
(J): To me the sound is Voodoo jungle with a psychedelic snarl. My philosophy is think deep, but play from the hip.
(P): Disharmony made into harmony, black cat bones rattling on a snare drum, and good and evil fighting to the death. My philosophy is just to have fun and let the magic take over.

Jerry, tell me about the beginning of Chicken Snake. How did you choose the name and where did it start?
The name came from a song I wrote for the Big City Stompers and the inspiration for that song came from a story that Pauline told me about her childhood growing up in the Louisiana swamp. We started the band when we were living in NYC. Me and Pauline wrote some songs and got our friends to play on the recording. That turned into Chicken Snake. Are there any memories from the Chicken Snake which you’d like to share with us?
(J): For me, meeting Garth Hudson when we played with him and The Sadies in NYC was something I will never forget.
(P): Too many to mention..

How would you describe your contact to people when you are on stage?
(J): Come a little closer, get into the groove and have a good time.
(P): Look everyone straight in the eyeballs and mean what you are singing about. I like to connect.

Which was the best moment of your career and which was the worst?
(J): The best was playing with The Gories at the Bowery Ballroom in NYC. The worst is anytime you can't hear what's going on. That makes it hard to play off each other and that is what this band is about.
(P): It's all been great... I love to share the stage with my husband and our friends... I guess playing with Garth Hudson was pretty amazing. Jerry, are there any memories from “the road” from Alabama to NY, which you’d like to share with us?
Most of my time in Alabama was just spent growing up and knowing that's not where I was supposed to be. I felt like an alien. When I finally got to NYC, I felt like that was I needed to be to do my thing. Now I know each place I have lived, has made me who I am. After NYC, my time in New Orleans had a major influence on my life and music.

Do you have any amusing tales to tell of your experience with NYC Lower East Side bands?
Oh man, most of that time was pretty amusing as I didn't know what I was doing and most of the time I was in an altered state. Maybe the time it was my birthday and I fell out of the van and broke my hand- and that was Knoxville Girls. I played the next show in a cast. It was all pretty amusing.

The Funhouse recording studio, how that came about? Do you remember any interesting from recording time?

The Funhouse started when I was doing The Honeymoon Killers. I rented the space for rehearsals. Other Lower East Side bands rehearsed there to help me pay the rent. I was always doing basic recording, but when i started playing with Chrome Cranks, I closed the space for rehearsal and began recording full time. There were lots of fun times and cool bands. For me the most exciting time was when I recorded Patti Smith. It was just a little session- spoken word over noise guitar- but very cool.

What the difference between producer and musician? What characterized the sound of The Funhouse studio?

I don't know, producer/musician is about the same. I listen to everything as it should sound with instruments and effects. Certain songs should have a distinctive sound to convey the sound.  Atmosphere is very important. I never want to hear it slick or over-produced. I like for it to sound real.

(J): From John Lee Hooker and Howlin' Wolf I learned that it is okay to hang on one chord as long as it feels good.

(P): I have learned the most from people like Jessie Mae Hemphill and Bessie Smith.. Just roll with it and say what you mean. 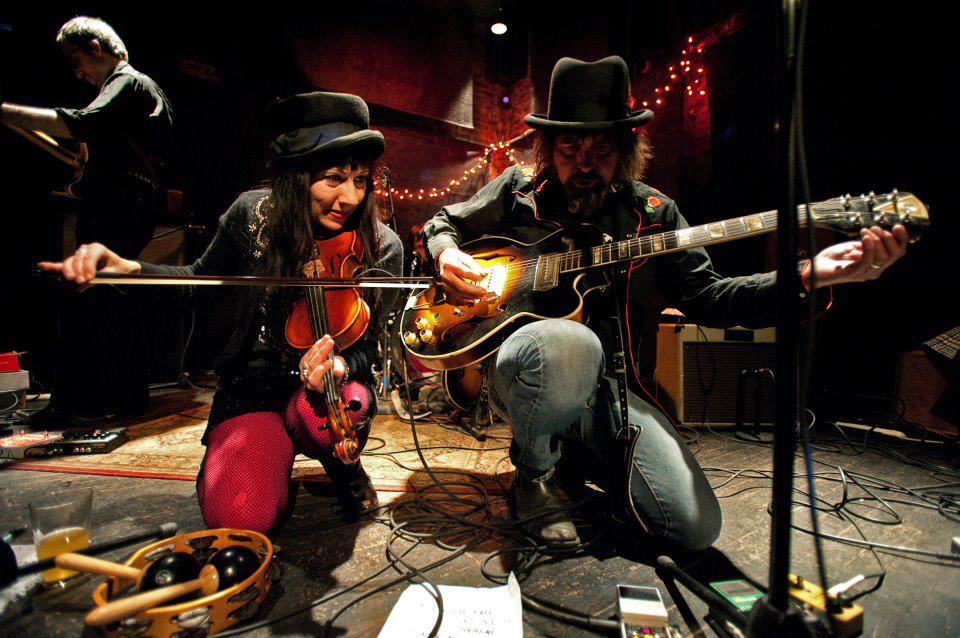 What does the BLUES mean to you & what does music offered you?
(J): The blues is real, not superficial. It moves me.
(P): The blues is magic mojo, alligator tears, and your baby just ran away with your best friend. It offers me the thought of "Things could be much worse."

Jerry, how has the blues business changed over the years since you first started in music?
Well real blues artists still don't make much money. Not much of a change. 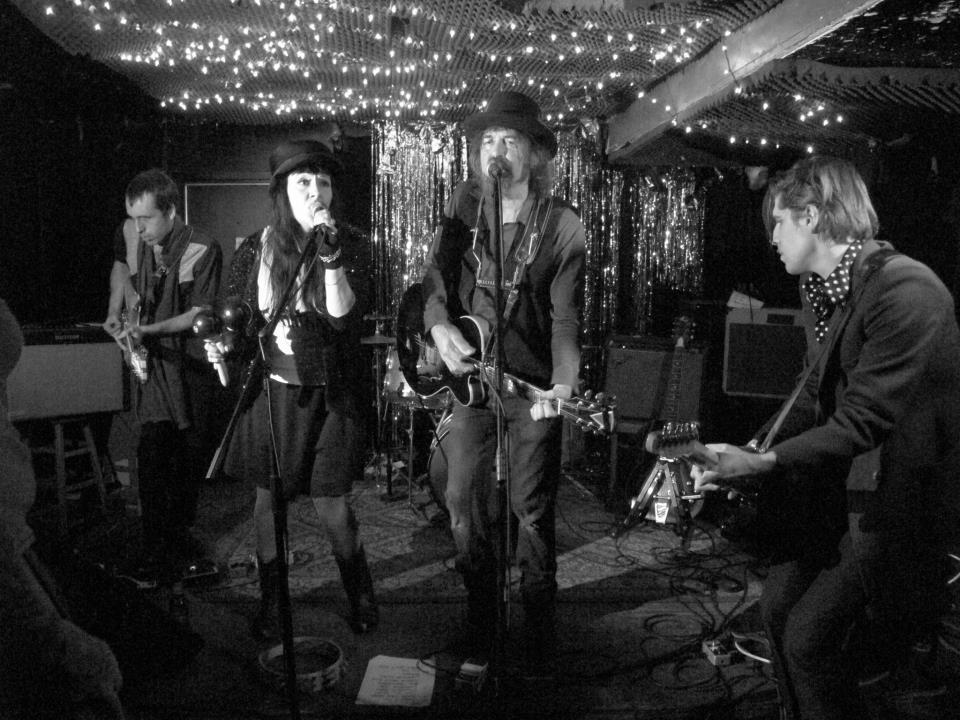 Which of historical music personalities would you like to meet? How you would spend a day with Roky Erickson?
(J): I would have loved to have met Hubert Sumlin. He seemed like a very sweet man and I dug his guitar style.  I would have also liked to ask Skip James why the devil got his woman. - I might spend a day with Roky doin' my laundry, watching the drier spin and eating chocolate bars- and maybe take in a midnight feature of "Night of the Demon ".
(P): I would have liked to have met Robert Johnson at the crossroads and watched as he conversed with the devil- then drink until the rooster crows. I would spend the day with Roky just listening to old records -Then discuss aliens over a big pot of homemade Gumbo.