An Interview with singer/actress Audrey Turner, widow of legendary Ike Turner: The Blues is Life Talking

"What I miss most about Ike is his humor oooh he was funny. I miss our togetherness our cozy... His brilliantness about music!"

Audrey Turner: Love is not Fear

San Francisco-born Audrey Madison Turner attributes her musical inclination to her parents. Art and Georgia Madison surrounded their children with instruments and a wide range of music throughout their childhood.  The captivating singer/songwriter, producer and actress began participating in beauty contests and talent shows at an early age, eventually debuting an original song for her graduating class at their commencement ceremony. Following high school Audrey’s trek to become a psychologist fell second to her dreams of becoming a star. It wasn’t long before Audrey founded “Madison Avenue,” which benefitted from contributions from musical genius Stevie Wonder.  The family-based group produced hits including  “Buttercup” and “Much In Love.”  Audrey appeared in various talent search competitions and on numerous talk shows, particularly Playboy Carol Vatalie’s Talk show and the “Big Break Talent Search,” hosted by Natalie Cole.  Additionally, she became the assistant choreographer to Lon Fontaine of Motown, creating routines for major superstars such as Aretha Franklin, the Temptations, and the Pointer Sisters.  It wasn’t long before Madison-Turner graced the stage with Chuck Berry, Little Richard, BB King and Little Milton. As she began catching the sights of the industry and public alike, “The King of Rock & Roll”—Ike Turner took an unabashed liking to Audrey. After meeting Ike Turner through a mutual friend Madison-Turner didn’t think twice about sharing the stage and going on tour with the man himself.  Their professional relationship eventually segued into a romantic one, leading to a wedding years later.  Audrey Madison-Turner will soon release her first solo album, appropriately titled “Picking Up The Pieces.” Audrey is a fusion of today’s best female vocalists with a personal twist.
She is active in various charitable efforts and delighted to help those causes that are advocates for mentally and physically abused women.

Hello from the sunny Athens, how are you?

It’s a rainy Sunday early afternoon I’m relaxing and in the moment of my interview with Blues Greece. Audrey, when was your first desire to become involved in the music & from whom have you have learned the most secrets about the music?
I knew early in my childhood I wanted to be a Star, because that meant doing what I was so in love with Entertainment, music, acting, and song writing, I can certainly say that I’ve learned   most secrets from my husband Ike Turner.

Do you think that your music comes from the heart, the brain or the soul? What does the BLUES/ SOUL mean to you & what does music offered you?
I believe that music comes from my soul, heart and the brain. Blues means to me telling it from your gut the root core of your heart, soul is a feeling, it’s your feeling my feeling what our emotions are reflecting.  Music has offered me an outlet of expression to give the love inside of me to share joy laughter and tears, to communicate with my fellow humans to lift up to feel and touch the heart build the confidence of all people, That un hum moment. 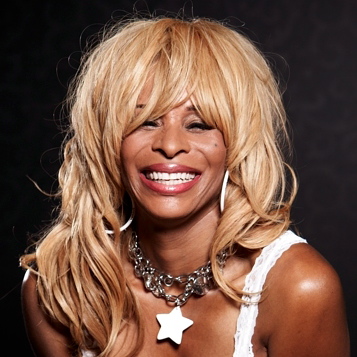 How/where do you get inspiration for your songs & what do you think is the main characteristic of you personality that made you a songwriter?
When it comes to writing a song I hear melodies in my head, sometimes I hear a whole song completely melody and lyrics.  My inspiration is sparked from a thought a or a melody, It can be something I see in someone or what I’m going through.  The characteristics  in my personality  that made me a song writer is the need and desired to nerture and to share with people, I love seeing people happy and In love.

Are there any memories from “Madison Avenue”, which you’d like to share with us?
My times with Madison Avenue were a blast! I loved fact that we were family performing together, the choreography the dancing we were like broad way soul entertainment. We where like Gladys Knight and the Pips except I did more dancing and singing than Gladys it was my thing.

Which was the best moment of your career and which was the worst?
The worst moment of my career is when I don’t have a career not being utilized in my career. One of the best moment in my career was when my husband Ike Turner announced me to come on stage in Memphis I had no ideal I was performing that night it was supposed  be all about Ike Turner  the Hero’s Award in honor of  him .  I came on stage and sang “I Smell Trouble” my very first time singing the Blues in front of an audience of 5,000. I received 3 to 4 standing ovation, it was that night I discovered I really like the Blues. What is the “think” you miss most from Ike? Which memory from him makes you smile?
What I miss most about Ike is his humor oooh he was funny. I miss our togetherness our cozy... His brilliantness about music!

Of all the BLUES people you’ve meeting, who do you admire the most?
Of all the people I’ve met through Blues I admire a soul that has been through it all who fell down and got back up stood through the times of trials and tribulation ,through being discriminated upon and watching abuse around him also being a part of the abuse himself, he came through and broke barriers by creating a melting pot through music for being in ducted in the hall of fame for the first Rock & Roll song in history, the mistakes battle, the shame , a man who fell down got back up came back and won a Grammy my late husband Ike Turner. You have played with many musicians. It must be hard, but which gig have been the biggest Xperience

for you? And why?
The gigs that I had with Ike Turner on stage was the greatest and the biggest experience for me, reason being was that Ike naturally command attention with humility through his gift everything had to do with feeling from the stage to the audience and from the audience to the stage, Ike and I had a bond through our love and admiration for music individually and collectively which fed into the audience.

Which of historical blues personalities would you like to meet?
One of the biggest historical Music Icon’s I would of loved to meet would had been Billy Holiday by far. Her strengths, weakness, loneliness, sadness, pain and her joy was lived through her music.

Some music styles can be fads but the blues and soul is always with us.  Why do think that is?
The reason why I believe the Blues will never be a fad is because the Blues is you the Blues is me It’s always present it’s not just something passing through, It’s inside of each of one of our souls, “The Blues is Life Talking” 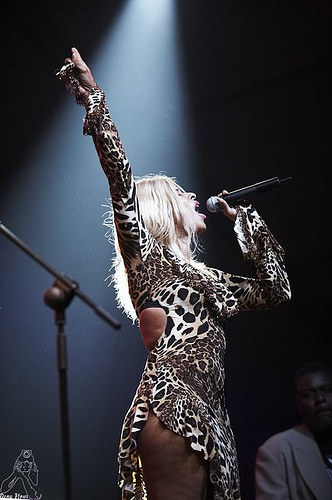 What are you thinking when you are on stage, how would you describe your contact to people when you are on stage? What compliment do you appreciate the most after a gig?
What I’m thinking when I’m on stage is living in my story I’m born again when I’m on stage it’s like being naked and not being ashamed sometimes It feels like an out of body experience,  my contact to people on stage is that I’m giving you me  my love my pain my joy my happiness feel the love I’m connecting with you we all feel the same things, If I can bring you some ease from that pain, make you laugh or even cry, that’s my reward. I’m a vehicle to send love to every human kind in my audience. After a show the compliment I appreciate is “You made me feel so good inside.

And would you like to tell your best memory about your work with Lon Fontaine of Motown, creating routines for major superstars such as Aretha Franklin, the Temptations, and the Pointer Sisters.
My best memory of working with Lon Fontain of Motown choreographer was being in his studio assisting him with Aretha Franklin and him Telling me in front of the Temptations “baby do this dance move show them how it’s done.” 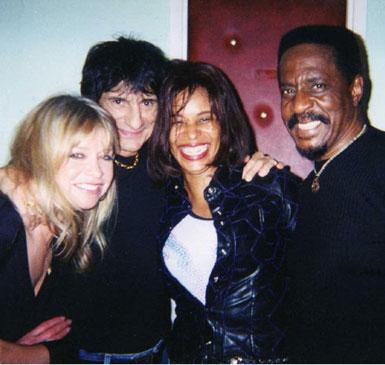 When did you last laughing (and cry) and why?
My son Maurion’s daughter Khylia was so sleepy she said to me mom mom “go to sleep go to sleep go to sleep Khylia”  That is what I would sing to her to make her fall asleep, it tickled me so that she made a request cause she needed help going to sleep (smiling)..
The last time I had a really big cry I was about to go on stage and open up for  Nick Simmons who is Jean Simmons of Kiss son. Jean Simmons appeared on stage playing bass.  Well before I went on stage I broke down crying like a baby the  whole band Ike trained was there on stage there was only one person missing, Ike.

What would you say - what advice would you give to mentally and physically abused women?
The advice I would give to mentally and physically abused women is not be afraid talk to someone about what you are dealing with reach out to family or a close friend, know that you are not alone, step out of the circle of abuse that is keeping you hostage. By stepping out you can get a clear picture of how love and life are suppose to be.  Love is not Fear

For everything I’ve been through and came through lows and highs, I give praise to my God Lord Jesus Christ, To you reading my interview I Love You God Bless you . 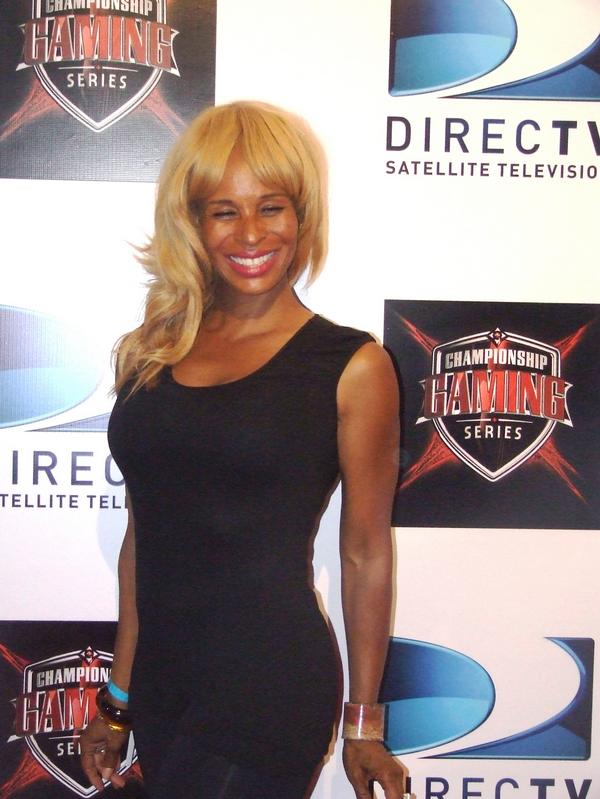