An Interview with the Dutch composer, singer and songwriter Leigh Blond: The blues will last long. It is genetic, I just wrote above.

"The Blues is my first and last music love. It brings me happiness, all my life."

Leigh Blond, is a Dutch composer, singer and songwriter. Bert de Ruijter, known as Leigh Blond, at the age of 5, during visiting his aunts, he was introduced to the music of Elvis Presley and Chuck Berry. Six years later he bought his first album, I Feel Like a Millionaire of Champion Jack Dupree. At the age of 14 he started to learn play the guitar and at the age of 16 he started to write songs lyrics. During his career he wrote about 100 texts and some of they were used by other artists such as Boz Scaaggs, Bonnie Raitt, Dusty Springfield, Bill Wyman, Chris Farlowe, Long John Baldry, Paul Rodgers and others. Between 1975 and 1981 he played the piano in the Boogie Woogie and Blues Band, which recorded two albums and gave concerts mainly in the Netherlands, Germany and Italy. In 1990 he started to sing (he made a vocal attempts before, but discarded they because of trying to focus on playing the piano and guitar). Discography: River of Tears (1982), Bluesness (1992), See Me Thru (1999), Tribute To PCL (2004), Blueside of the Road (2006), and the brand new album Subtle Ways, with 12 original songs from Leigh Blond.

Bert, when was your first desire to become involved in the blues & who were your first idols?

My Grandfather often took me to so-called Cafes (bars) between my 4th and 14th. These places had juke boxes with records of Elvis Presley, Chuck Berry. I loved Kiss Me Quick, Devil in Disguise, You never can tell… I remember, when I was about 8 years old, I thought I could play all that myself if I wanted to. I had not seen any music instrument at that time. Only my Father’s mouth harmonica. He was a brilliant player.

Around my 11th I heard Champion Jack Dupree. He broke my heart. Otis Spann, Freddy King, John Mayall, Eric Clapton, Peter Green followed. Blues is a great Love of me. Even if I wanted, I could not get away from it. 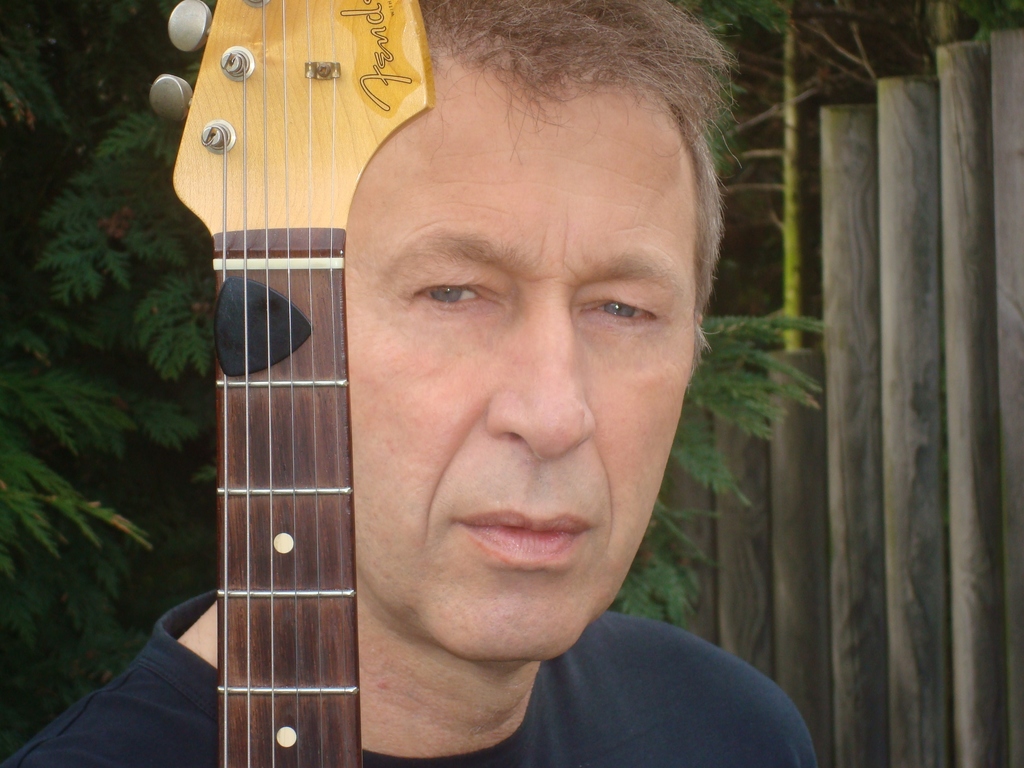 At 13 I bought a drum kit to be a Band with 3 friends. The guitarist could not play guitar, he totally lacked rhythm, his right hand didn’t work. I asked him to show what chords to take with my left hand, and demonstrated him how to play. Gloria of Them. E, D and A. The other, better Band of the town asked me to join them on guitar. 4 days later we had our first gig for 250 people. We had a set list of 30 songs. On 5 of them I switched off the volume of my guitar. Didn’t know how to play them.

There were many best moments, but a concert in the Royal Albert Hall in 2004, with British celebrity musicians, among which a few of my early idols, was a memorable event. There were many bad performances. I think I hate those where I lose my voice during singing. I tend to go way out of tune, then.

The inspiration to write songs came from the early days, when I was 16/17. We did covers, and every song I had to play and sing differently. One can’t sing/play one song John Lee Hooker and the next one Little Feat. I found that a mission impossible, hence I started to make my own songs. No mentors. I did what every songwriter did.

I like to write about lost love, social issues, human things….

See me thru, Blueside of the road, You can’t always keep the ones you love, One more day, Only you, True love. Memory is my paradise.  By the way, Good head for business I created in Athens Glyfada, back in 1996. Laying on a bench next to the sea, after a lunch with wine. The tune got into my head, and I didn’t have any recording device to put it on. I kept singing it 20 hours a day, for 4 days, until I got home. 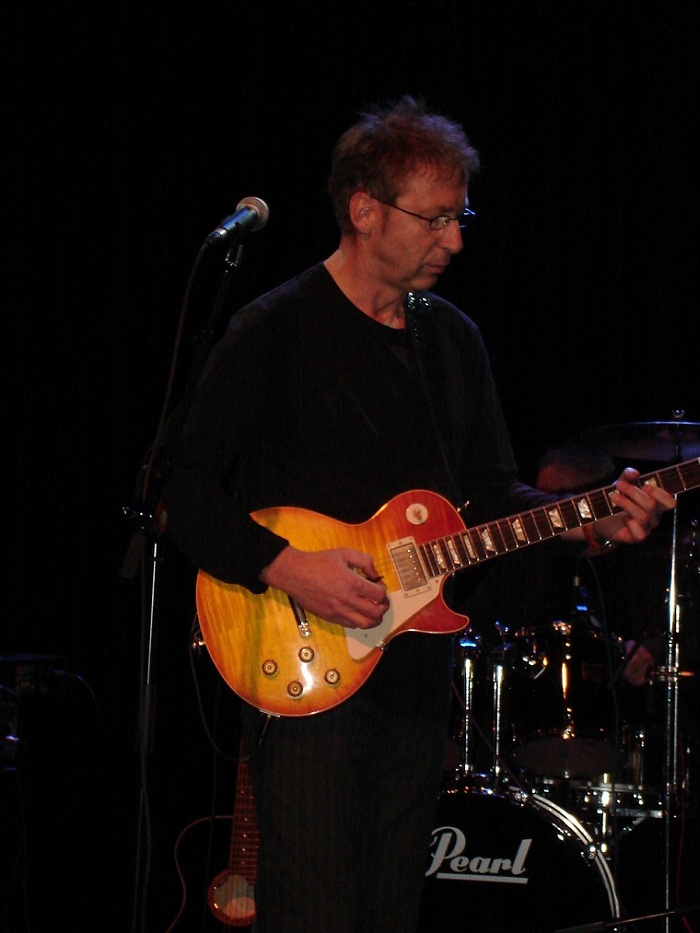 So many nice, compelling blues’. I love the pump blues of original Fleetwood Mac (Blues with a feeling). So hard to share of John Mayall. Have you ever loved a woman of Eric Clapton. The Supernatural of Peter Green. Thinking of a LP that impressed me most : Then Play On of Fleetwood Mac.

I think humans can’t create emotion with the heart or the soul, because they both probably do not exist as creative, emotional organs. That would leave the brain. My romantic, melancholic brain. The happier I am, the sadder my songs become. Strange but true.

What does the BLUES mean to you & what does Blues offer you?

My first and last music love. It brings me happiness, all my life.

I am what I am, I like what I like. I wouldn’t like to try or create something that does not come with a genuine loving feeling. My sound is pretty clean, hardly effects. I never had any music education; my playing contains all the funny things an autodidact has, which makes the sound distinctive.

Playing with musicians who are of much higher level than yourself. Listening and learning. Trying to be humble, which is very difficult for many musicians. 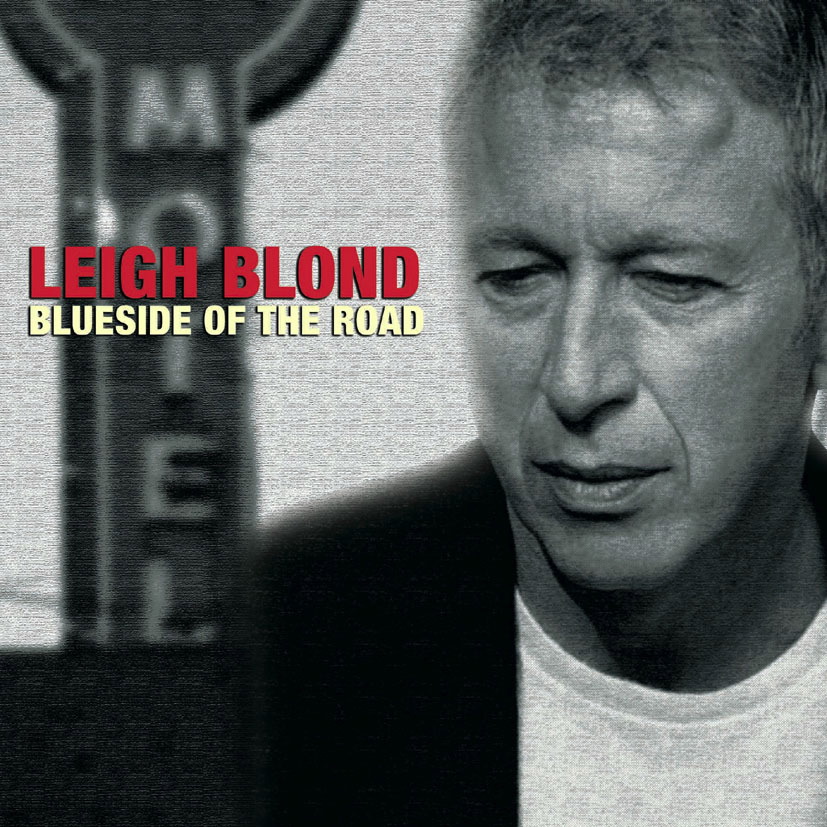 I remember we had a singer in the Band once. 400 people audience in a prestigious music Café. At the time we were due to play, we could not find the singer. The next day we found out he had gone home ; the pressure had become too much for him, when he had seen certain girls in the audience….. That’s how I became a singer. I did the singing that night.

And, another one. I was on stage with my friend Kaz Lux (singer of Brainbox/Jan Akkerman). We were sitting on chairs. All of a sudden I noticed a lot of smoke coming out from under our chairs. I stopped singing and playing and warning Kaz and the audience, there was a fire going on. Massive laughter came from the audience, and Kaz. The smoke was part of the show. Everybody thought I was joking. But I was not.

Peter Green. Bob Dylan. Paul McCartney.  I met many others.

Most of what I do I learned from listening to records of other musicians. It may sound boring, but the early Fleetwood Mac was very inspirational to me. Peter Green, Danny Kirwan.

Of all the BLUES people you’ve been meeting, who do you admire the most? 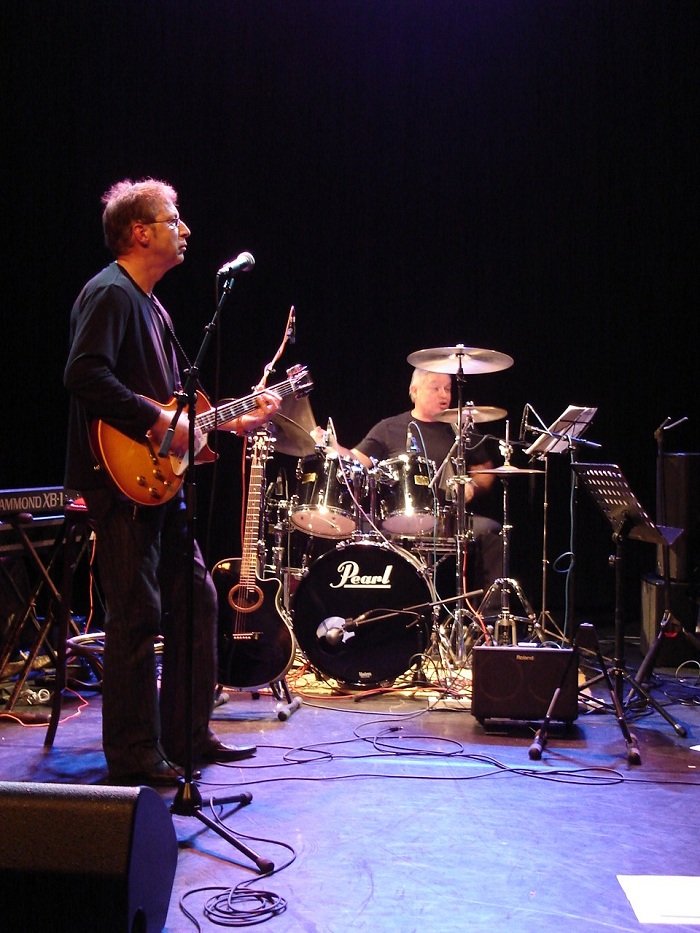 Blues must be in the genes. Almost any gig I have done, the audience begins to move, sway and shake as soon as the first 12 bar is carried out. I love to see that. The same happens to me, all the time.

The blues will last long. It is genetic, I just wrote above.

I started to play guitar and tried to sound like Eric, Peter, Jeff Beck. That’s it. In combination with the abilities of my brain (locomotion) I ended up somewhere. Still learning though….

What characterizes the sound of Leigh Blond? How did you chose the nickname “Leigh Blond”

Melodic Blues.  The name Leigh Blond was an accident. I once played with Long John Baldry. I like the sound of that name – it sounds like an alliteration, but it is not an alliteration as we can see. We had a band in 1990, which I liked to call Leigh Blond Band. I found the sound nice. Alliteration !  Leigh came from Leigh on Sea in England (I happen to drive there in my car, when I was asked to give myself a name by the record company( and Blond popped up as the second half of the alliteration with Band (Blond Band). Soon after the naming the Band did not want to be my Band, so I dropped the Band. Leigh Blond was born. And right from the start the free Leigh Blond publicity was so broad, that I could not change the name anymore. First record Bluesness sold 52.000 pieces. So …. 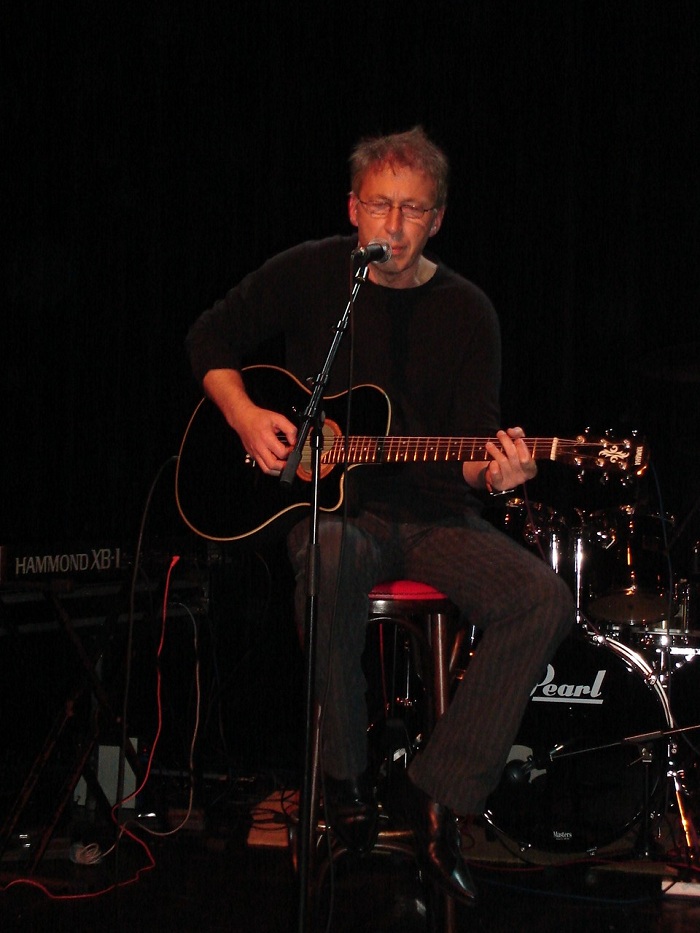 Cuby + Blizzards was the first and best Dutch blues band we ever had here. Cuby, whose real name was Harry Muskee died 3 months ago. I knew him well. The Blizzards, Herman Deinum and Hans Lafaille are contributing on my new CD, Subtle Ways. And on Bluesness, the first Leigh Blond CD from 1992.

What are the international artists who have a special relationship with the blues in Netherlands?

I can’t think of any in particular. All musicians, from all over the world, want to come to Amsterdam one time or more.

What are the most popular local bands of blues, do the media help the blues?

Cuby + Blizzards were fine. They had originality. The other Bands do not impress me.

The period 1965 – 1975. Much live music then. Everything was new, the first time. People of my age know that. Everything that has happened or happens after that era is somehow a copy of. There are a few exceptions… 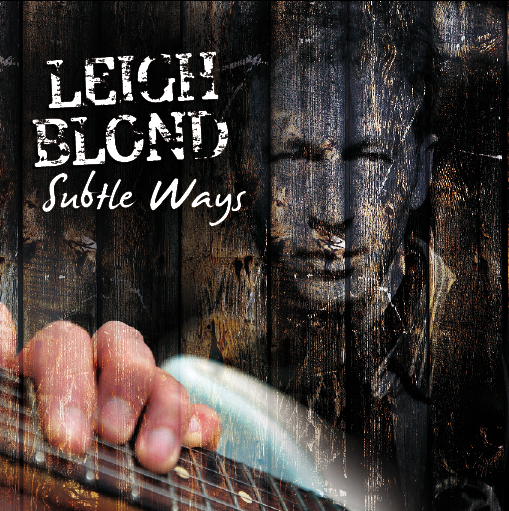 Do you believe it has the possibility of someone musician to live only with the blues in your country?

Smiling faces. Sweet and Happy people. Caring and loving each other, and the planet.  Trying to make other people happy.

What are your plans? Do you have a message for the Greeks?

As long as I am vertical and in good health I will make songs, record them and release CD’s. I love to do that. To the Greek fans I like to say – please, arrange 2 or 3 gigs in one weekend, where I can play along with a Greek blues band. I really would like to meet you.

I did not ask John and Eric anything. I told them, that they are so valuable to me and to so many people, because they have made and still make millions of smiling faces with their music. They have created so much happiness, meanwhile, and I would like them to carry on doing that for very long. Thank you John and Eric. I would say the same thing to Peter Green if I met him.

How you would spend a day with Champion Jack Dupree

That man must have been such a sweet human being. Listen to his voice, his words. I would certainly play piano with him together on one piano. Try to do his backing vocals. Put a lead and slide guitar on the tracks we would do. Release a record – Champion Jack Dupree and Leigh Blond – The Blues Forever. 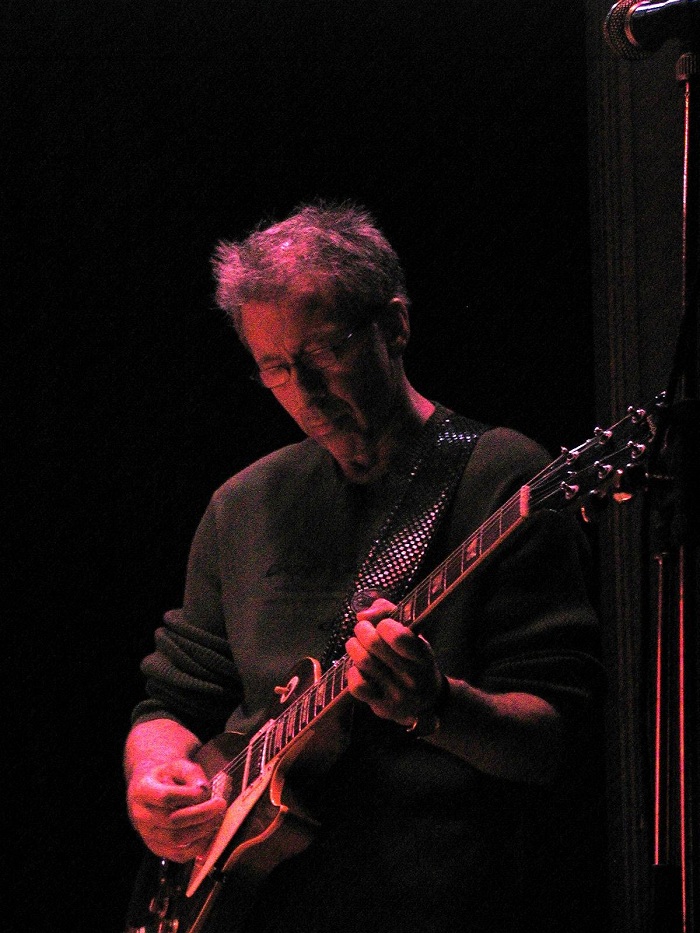